I instantly fell for Akira at first watch thanks to its seductively seedy setting. Awestruck by its terrifyingly violent (yet achingly cool) neo-Tokyo, I yearned to inhabit this metropolis. In hindsight, I wouldn’t have lasted among its biker gangs and merciless military, but exploring its world from the safety of a controller seemed like a no brainer. Yet, despite fitting the medium like a glove, there’s never been an Akira game. Thankfully, Devolver’s upcoming release – Ruiner – takes a more than subtle bit of inspiration from the 1988 classic.

Set in 2091’s sprawling cyber metropolis of Rengkok, a city far from the utopia you’d hope for. Thanks to an unexplained event, modern society has crumbled, causing citizens to often resort to violence. Combining Akira’s neon-soaked aesthetic with a suitably violent edge, it’s a game that has a wonderfully nasty feel to it. While nasty is nothing new for Devolver, this game’s higher polygon count is. Stepping away from the 2D adventures that the publisher is known for, Ruiner takes Hotline Miami-esque top-down combat and beats it into the third dimension. 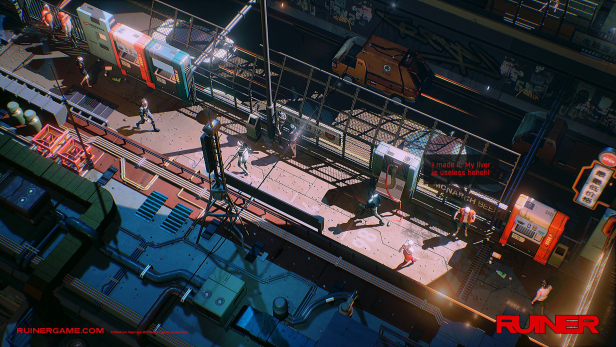 Refreshingly, this game wastes no time in throwing players into the action. Controlling a mysterious figure obscured by a screen-mounted helmet, standing in a poorly-lit facility with a single ominous message appearing on screen: kill the boss. After watching the screen glitch and distort, the face of a blonde-haired figure appears on the comms channel repeating the same instruction: KILL THE BOSS.  As I run around a dark, steel-coated industrial complex, the game quickly introduces each of its core mechanics.

Initially armed with just a baton, Ruiner’s opening minutes soon prepare players for the merciless rampage to come, teaching you how to dash at great speeds before granting the ability to slow down time. Armed with these rather handy powers, it was time to complete the mission.

Advancing through the facility, traumatized employees dive for cover as suited goons quickly swarm. Charging at me with pipes and katanas, I dash like a blood-crazed Road Runner, swiftly dodging each attack. Weaving just out of the reach of a goon’s blade, a tap of X slows time, giving me a split second to dash out of danger. Seizing this opportunity, I furiously swing my baton with the right bumper, dishing out blow after blow until the goons collapse. Even though both abilities aren’t really anything new, the way you can combine both in Ruiner results in excellently frantic and urgent combat, making one button attacks feel strangely tactical. 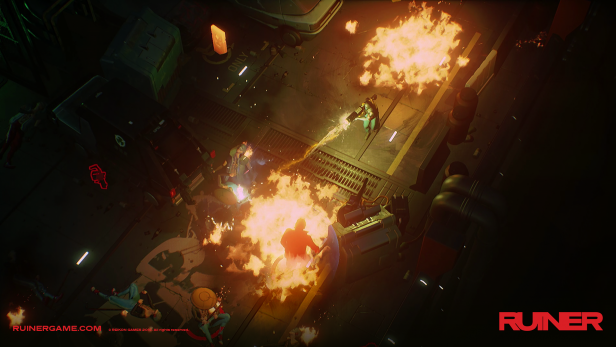 With encounters soon falling into a swift and satisfying rhythm, I make short work of the first few rounds of enemies. Moving further through the complex, the facility’s alarm lights suddenly flash an ominous red as I discover a pistol in a nearby weapons locker. Unsurprisingly, I’m immediately swarmed by enemies. As gun-toting baddies unload their clips in my direction I hit the dash button, furiously zig-zagging out of theway. Managing to avoid incoming gunfire and melee attacks while lining up your own shots on the right analogue stick is harder than it sounds, resulting in combat that offers a tense and fairly unique challenge.

Little did I know, Ruiner was about to get much, much harder. Making short work of several packs of increasingly armed foes, the developers saw fit to add two new things into the mix – a shield ability and more powerful firearms. Using my new shield to run through a stream of mounted machine gun fire, this electrical barrier soon adds an extra tactical layer to battles. With dashes and shields both being tied to an energy meter, players have to decide which is more likely to stop them being killed in the heat of battle. While shields protect from a deadly blow, combining shield and dash is great for attacks but leaves you vulnerable.

With the game throwing multiple henchmen at you at any given time, juggling abilities presents a controller-squeezing challenge, leaving me relishing the brief downtime between encounters.

Just as I’d started getting to grips with my new arsenal, guards formed in larger groups. While everything from shotgun to a devastating laser helped even the odds a bit, dead foes slowly began to drop less health packs, leaving just abilities and cunning to survive.

Receiving increasingly irate text based orders from the mysterious blonde messenger, I soon came face to face with a large door adorned with huge red Kanji. It was boss killing time. It was then that Ruiner’s previously non-existent plot started to reveal itself. The mystery assailant messaging our hero sensed our character’s hesitation at the door, letting slip that he was holding the protagonist’s brother hostage. With the entire screen starting to flicker and crackle with strange colours and glitches, the kidnapper initiates a timer, commanding that I kill the target now or risk losing the protagonist’s brother. 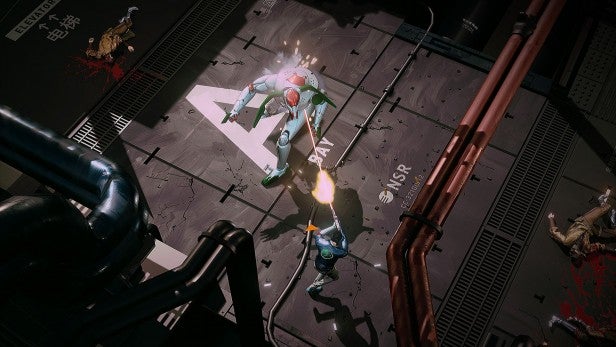 While the boss fight that followed didn’t exactly break the mould, it felt like an exciting test of everything that Ruiner had taught me so far. Holding off waves of henchmen, you simultaneously had to defeat them while contending with a challenging boss who had your abilities abilities. Yet it was what happened next that had me most intrigued. Continuing to mess with my character’s vision, a woman appeared on the comms, revealing that I had been hacked. Discovering the hack was made using an arm implant, she quickly severed the limb, dragging me into the relative safety of Rengkok city.

Instead of simply showing cutscenes that led straight into the next mission, Ruiner lets players explore Rengkok’s sleazy underbelly. Fixed up by a suitably anime-looking mechanic, I was tasked with tracking down a hacker at a local bar. Wandering around the hostile looking streets, I encountered several people who threatened to kill me, met a ‘wise’ homeless lady and made friends with an incredibly enthusiastic prostitute. Unfortunately, this was where the demo cut off. While I thoroughly enjoyed the combat, it’s how each mission intertwines with this colorful world that was the most exciting.

While each playthrough was locked to thirty minutes, I found myself replaying the demo multiple times, drawn to the uniquely dark atmosphere that oozes from every pixel. Based on what I’ve seen so far, Ruiner is a game that’s brimming with potential. Its frantic gameplay and dystopian, Akira-esque aesthetic hints at what could be a wonderfully unique action game. Now let’s just hope that Reikon can tie all of these promising elements together and deliver on all this potential.