After correcting a few issues we initially had with it, we're more confident in stating that the Ruark R5 is an accomplished performer with a comprehensive feature set, fine sound and attractive looks. There are few hi-fi systems available that tick those same boxes.

The Ruark R5 offers a myriad of features, good looks and sound all from a single box.

Trusted Reviews first got its hands (and eyes, and ears) on the Ruark Audio R5 last summer. And it’s fair to say the TR enthusiasm for this big, luxurious, grand’s-worth of do-it-all functionality was such that it was tempered only a little by grumbles about intermittently glitchy operation and the slightly divorced nature of its bass response.

Anyone familiar with the Ruark aesthetic is going to know exactly what’s what on glancing at the R5. The company is as adept as anyone when it comes to cabinetry. Sure enough, the R5 is a smoothly curved, impeccably finished slab of walnut veneer (grey lacquer is also available, which looks luxurious in an entirely different way).

The Camira grey fabric covering the drivers and the front panel is equally decorative and opulent, and the OLED display sitting inside it is crisp and bright. 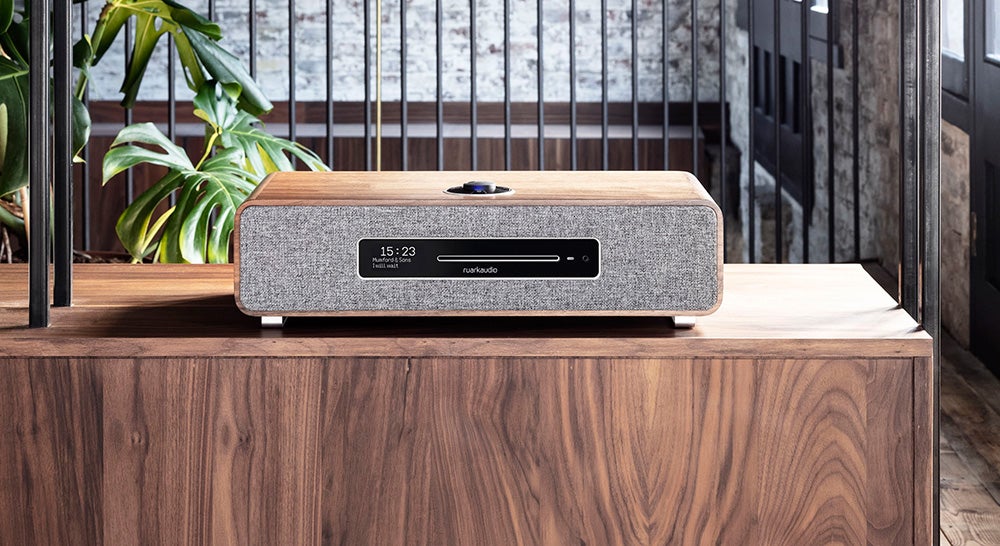 As an overall design proposition, the R5 combines purpose with indulgence. The materials all look and feel good, from the metallic heatsinks at the rear to the control dial recessed into the top panel.

At 52 x 30cm deep, the R5 is no shrinking violet – and it isn’t as if Ruark’s design philosophy contrives to make it look any smaller than it actually is. Instead, the R5 draws attention to itself in exactly the right way: by looking like a premium piece of electronics that someone very discerning might own.

For once, “all-in-one” is an entirely valid description. As long as you own – or at least have access to – some music of some description in some format or other, the Ruark is ready to let you hear it.

From looking at it, the R5’s most obvious feature is its CD drive; the slot-loading mechanism is front and centre. But there are plenty of other ways to get music into (and out of) the Ruark.

For other physical sources the R5 has a pair of stereo RCA line-level inputs and a pair of line-level outputs, and inputs for a moving-magnet turntable, too. There’s a digital optical input and a USB 2.0; an Ethernet socket completes the picture.

Naturally, Wi-Fi is on the menu too, bringing internet radio connectivity, Spotify Connect, Amazon Music, Deezer and Tidal with it. UPnP functionality is also on board, so any music stored on a common network is accessible. DAB and FM radio reception is available, and there’s the provision for DAB+ on the off-chance the format gains some meaningful traction before hell freezes over. Bluetooth, meanwhile, is of the optimal aptX HD variety. 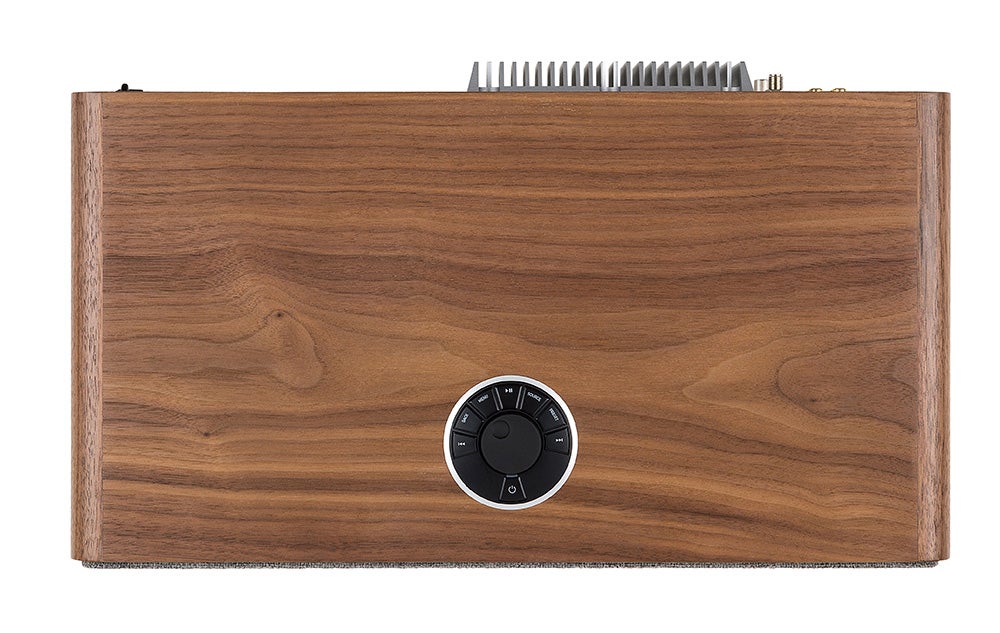 Incoming signals (well, the digital ones – which are the majority) are handled by what Ruark describes as an “audiophile” 32bit/192kHz DAC. From there, digital and analogue information alike is boosted by 90W of class AB amplification (very welcome indeed in the type of product where one might ordinarily bet the house on class D) and sent on to the driver array.

There’s a 75mm full-range neodymium driver behind the grille at either end of the fascia, and an offset 130mm long-throw woofer on the bottom of the cabinet.

Like all Ruark’s current range, the R5 is able to join a Ruark-centric multi-room system without too much difficulty at all.

All the necessary controls are available on the top panel of the R5, and that “dial-within-a-dial” arrangement (Ruark calls it a “RotoDial”) is mimicked by the remote control. It pairs super-quickly with the unit and, since it uses radio frequencies, it doesn’t require line-of-sight to issue instructions.

It’s also possible to use the Ruark LINK app (iOS and Android) to control the R5. It’s a pretty basic-looking app, and not what one could truthfully call completely stable. Like virtually every app developed by a company with finite resources, it works just fine the majority of the time – which is another way of saying “it can be frustrating”. 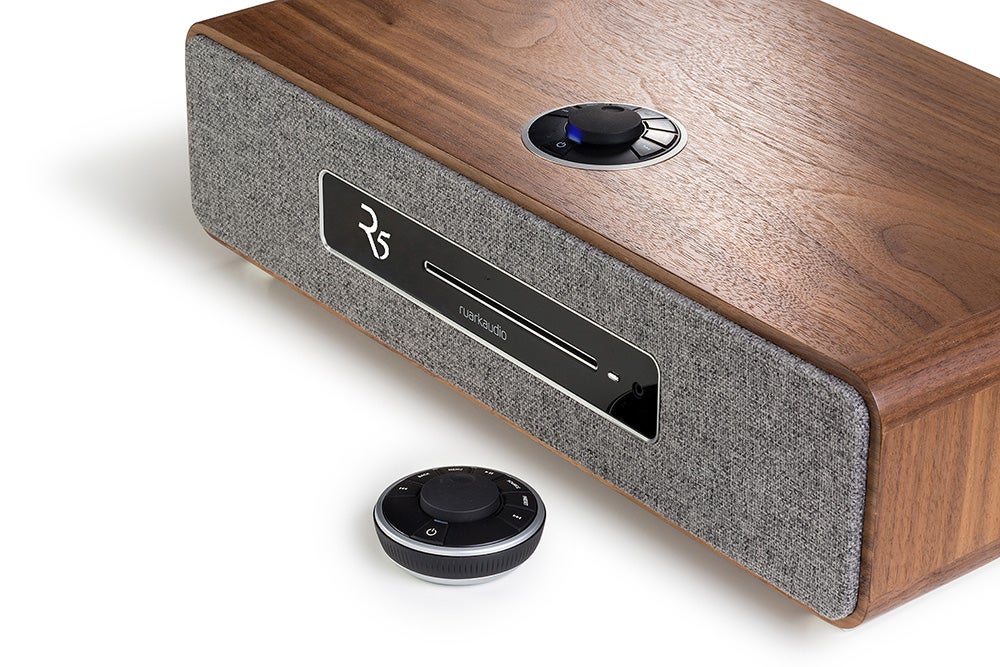 Mind you, a crashy app is no more galling than voice-control that’s hard of hearing – so in some ways it’s just as well the Ruark goes without any voice-based interface.

Unlike the previous sample, this R5 proves absolutely reliable in its responses to user requests. No failing to switch inputs or wake up from standby, no allegations of a disc playing in the empty CD drive. Just a solid, properly sorted user interface – which is as it should be.

Ruark R5 sound quality – Not the most exciting, but an accomplished presentation nonetheless

Realistically, what are you entitled to expect from a single box that’s absolutely bursting with functionality? Is it fair to expect sound quality on a par with a wireless speaker of similar cost, when all of the research and development time and money has gone into making the wireless speaker do just one thing really well? Surely not. Surely context is everything.

And so, in context, the Ruark R5 is now a pretty accomplished performer for which very few excuses need to be made.

It displays admirable consistency to its sound via any of its digital sources, and in the right circumstances it’s as enjoyable and engrossing a listen as most comparably priced wireless speakers.

No matter the material (and, once again, this test ran the gamut from Moscow’s Radio Edge Deep via internet radio and BBC 6Music on DAB to David Bowie’s Station To Station on CD, Funkadelic’s Free Your Mind… via streaming services, a Blu-ray of The Coen Brothers’ True Grit through the optical input and a vinyl copy of Fear Of Music by Talking Heads), the R5 presents itself as a crisp and intermittently attacking listen.

Straight from the box it’s overwhelmingly bassy, just as it was last time. And just as before, a quick glance at the “audio” menus reveals “loudness” is on – and because the woofer is firing straight onto a hard surface from maybe 4cm away, it needs turning off pronto. Some judicious finessing of the R5’s EQ options helps integrate the low frequencies into the rest of the audio information quite smoothly, which a) helps no end in bringing a deal more unity to the presentation; and b) is a bit better than last time.

The soundstage is reasonably broad and well defined, and remains coherent even when music gets complicated and multi-layered. The R5 handles dynamic shifts pretty well, and prevents the Russian EDM’s high-end excesses getting, well, too excessive.

There’s pleasing balance from the top of the frequency range down through the mids, where vocalists enjoy plenty of the detail that gives their presentation authentic character. 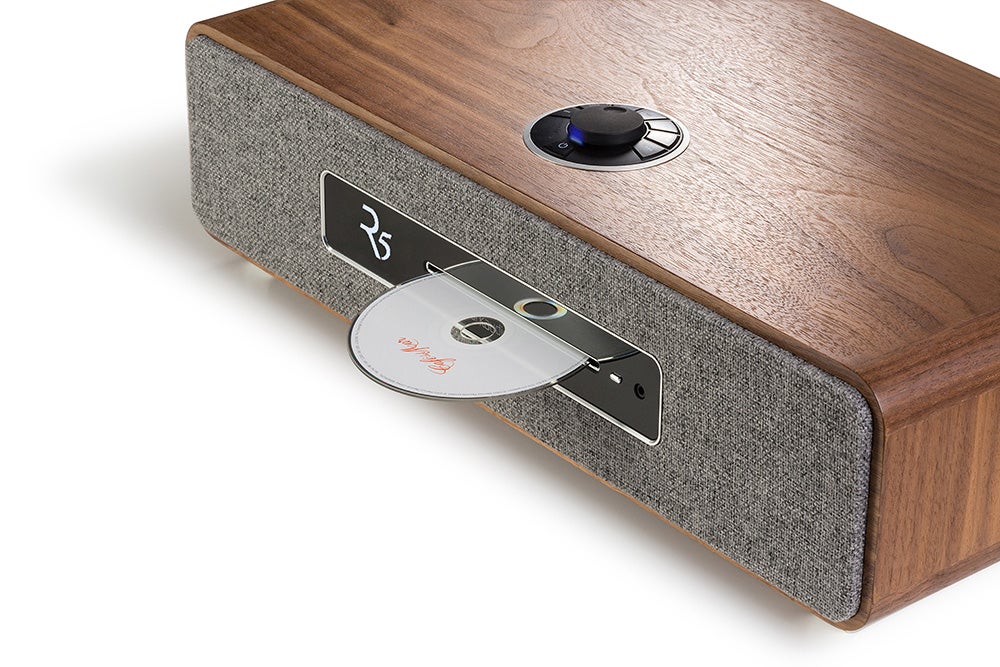 Everything snaps along nicely – the Ruark’s overall tonality is convincing and (once the “loudness” control is defeated) bass is well controlled. The overall presentation isn’t the most out-and-out exciting you’ve ever heard – but, in all honesty, its rather judicious approach is preferable to the sort of over-caffeinated enthusiasm this sort of money can buy elsewhere.

Perhaps the most unexpected aspect is the quality of the integrated phono stage. This sort of thing is quite often an afterthought, even in systems that don’t have the nap hand of functionality the R5 does. But there’s a good dose of the warmth and instinctive integration that makes vinyl such an enduring format.

Shortcomings are fewer now than on first acquaintance. The slight disconnect between the low frequencies and all the information above them has been minimised, so unless you crave a more up-and-at-’em overall character than this, it’s hard to suggest a realistic alternative to this new and improved R5.

The reasons to buy an R5 are pretty obvious, really. You want an uncompromised stack of functionality; you want convenience; you want something that isn’t going to wreck your interior decor; you want decent sound. Four boxes ticked with a big fat marker pen.

And the fact remains: you’re not spoiled for choice. In terms of both aspirations and functionality, the Roberts Stream 67 is the closest thing to the R5 that’s worth considering – and it looks, and sounds, like the £600 it costs. Which is another way of saying it doesn’t look, or sound, as good as the R5.