The Ruark R7 Mk3 continues the aim of its forebears: to be the ultimate all-in-one audio solution. To those ends, it features a CD player, DAB/DAB+/FM radio, Bluetooth aptX HD and Wi-Fi DLNA streaming, as well as stereo speakers and a subwoofer, all standing on its own four legs. You can even add an optional TV mount to turn it into a combined soundbar and AV stand.

That’s all much the same as the Mk1 and Mk2, albeit with that step up to the Hi-Res-capable flavour of Bluetooth streaming. New for the Mk3 is a built-in phono stage for vinyl fans to connect their record player, as well as a different control setup, fresh design, and revamped amplification. Oh, and some new multiroom capabilities and Spotify Connect integration. Quite a lot, in other words. 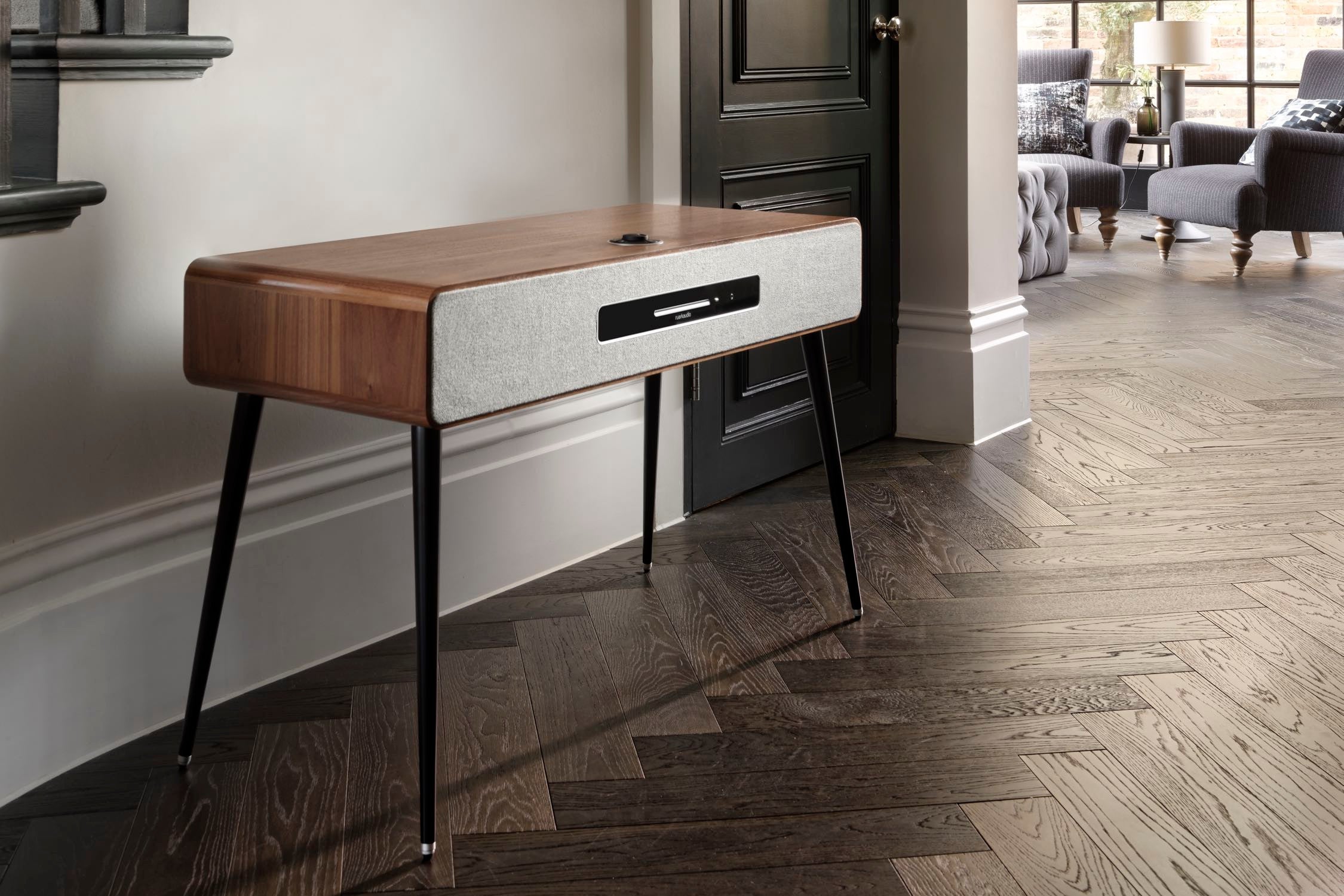 I’ve been a huge fan of Ruark’s previous R7 models. They’re a real throwback to those days when hi-fi was a piece of furniture, polished to a sheen before a fondue party and fired up for the launch of a new Donovan LP. And yet Ruark’s take on the old-school radiogram still seems so very now.

The styling change is rather striking, especially since the Ruark R7 Mk2 didn’t receive a visual refresh; it looked identical to the Mk1. This time the whole unit has been slimmed down a tad, and to me it does feel more compact, even though it stands the same 65cm tall on the natural pine legs and is 1m wide. It’s actually a tiny bit deeper at 42.5cm, thanks to the addition of a meaty heatsink at the back of the cabinet.

Rather than a pair of grilles to hide the two 140mm dual-concentric drivers, there’s now a single grille made from the same grey British fabric as used on the company’s exquisite little MR1 Mk2 Bluetooth speakers. The CD slot and display is cut into the centre of it.

Ruark’s trademark wraparound wooden cabinet again takes its cue from the MR1 Mk2, available in the same finishes of walnut or soft grey. The latter may look rather white in photos, but it’s much classier in the flesh. The screw-in legs are matte black for the walnut finish or a much paler pine for the soft grey.

It all feels rather more Scandinavian – particularly the soft grey version – than the previous models, which very much had their aesthetic roots in the radiograms of the ’60s and ’70s. However, it’s still distinctly Ruark.

Retaining this consistency – not just of aesthetic but also sonic signature – is made much simpler by the fact that, as with every Ruark product, the R7 Mk3 has been designed from the ground up by a very small, passionate team in the company’s seaside HQ. Manufacturing may be outsourced to a Chinese factory, but this is very much a British product. Ruark is even talking about bringing the assembly stage back to the UK at some point in the future. 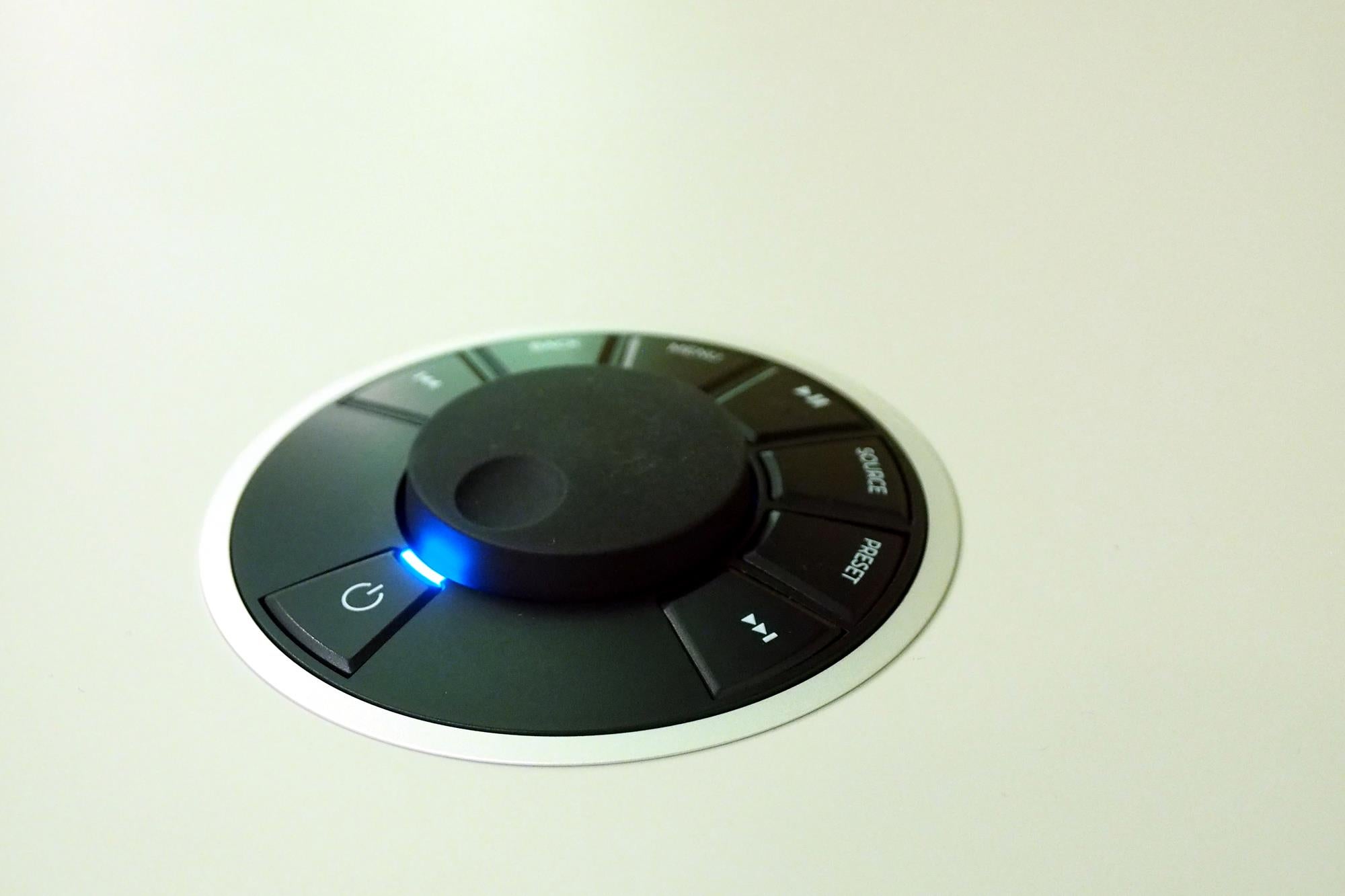 On top of the R7 Mk3 is Ruark’s usual RotoDial control, although where it was removable on the Mk1 and Mk2 so that it could be used as a remote, the Mk3’s controls are fixed in place. I was, well, just a bit miffed about this development at first, but then discovered that the R7 Mk3 comes with a separate wireless remote.

As Ruark boss Alan O’Rourke explained, this is so you’re not left completely without control if the remote is lost behind the sofa, and it also means you don’t have that ‘ashtray’ recess you get when you take the RotoDial out of the Mk1 or Mk2.

One of the major technical headlines of the R7 Mk3 is its multiroom capability. You can link the R7 to an existing R2 Mk3 or the forthcoming MRx stereo speaker. One very interesting feature of the R7’s streaming capabilities is that it can stream from any of its sources – so you can even stream vinyl from a record player plugged into the phono input.

Talking of inputs, an extra optical socket has been added, which means you can hook up both a Chromecast Audio and an AirPort Express. Or connect just one of those streamers and feed the R7 the audio from your TV – the optional TV mount (£299) enables the R7 Mk3 to also act as a TV stand and soundbar.

The TV mount itself remains unchanged from that of the Mk2. It’s excellent, with adjustable height and rotation, and able to take TVs up to 50 inches in size. I just wish it had more than one shelf, or the option of a full-width shelf, as I had to sit my Sky Q box on top of my Blu-ray player.

The driver configuration of the R7 Mk3 remains the same as on the previous models, with a pair of 140mm dual-concentric drivers in stereo, and a 200mm active subwoofer under the left side. The 160W of class A-B amplification is all-new, though, as is a 3D DSP mode developed in-house to add extra spatiality to the sound. 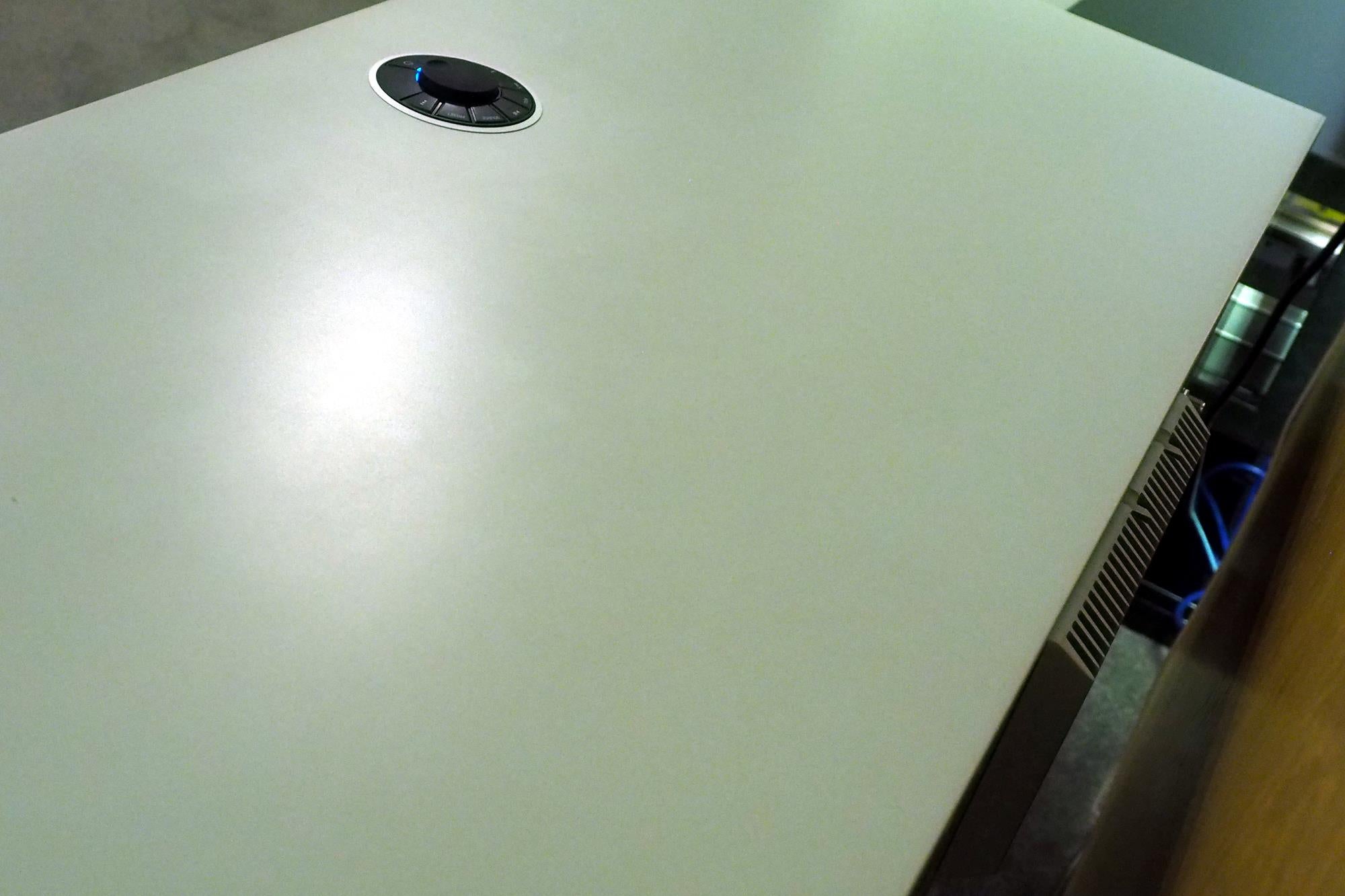 Ruark was kind enough to supply me with the TV stand, so I was able to give the R7 Mk3 a good run as both a music system and a soundbar. The sheer number of connections – both wired and wireless – meant I was able to try just about every audio source I had to hand. At one point I was even streaming tunes to the R7 from the Chord Poly‘s microSD card used as a DLNA server, controlled by my phone – which was basically witchcraft.

The Ruark R7 Mk3 sounds like a proper hi-fi system; like a pair of large, high-quality standmount speakers sited close together. There’s terrific treble energy and mid-range resolution, and decent bass depth without any boom.

It seems to have even more deftness of touch than the earlier models, which were already amazing considering the limitations of the one-box design. The shimmery realism of vocals on something like Joe Purdy’s ‘Canyon Joe’ is just gorgeous. Only a narrow degree of stereo separation betrays the R7’s all-in-oneness.

I was lucky enough to have to hand some likely competition in the form of the slightly more expensive Devialet Phantom Gold, and the much cheaper (but still premium-priced) Naim Mu-so. The Ruark really does stand ahead of both on nearly all counts.

Its subtlety and mid-range resolving power are a perfect foil to the Devialet’s bombastic bass and in-your-face treble presentation. Despite the Naim’s undoubted greatness, it’s unfair to compare it with the other two – you could buy a Mu-so and a pair of Mu-so Qb to make an exceptional multiroom system for just the price of the R7.

As a soundbar the R7 Mk3 is also brilliant, delivering crisp voices and a decent amount of thump from the sub when necessary. If you’re not sure where you’d fit this in your house, I’d suggest looking at the space under your TV and budgeting the extra £299 for the AV mount.

My only complaint really is that certain things shown on the display could have been made bigger. I’d really have liked, in particular, for the source selection and volume to have been displayed in a larger font, so they’re easier to see from across a room. 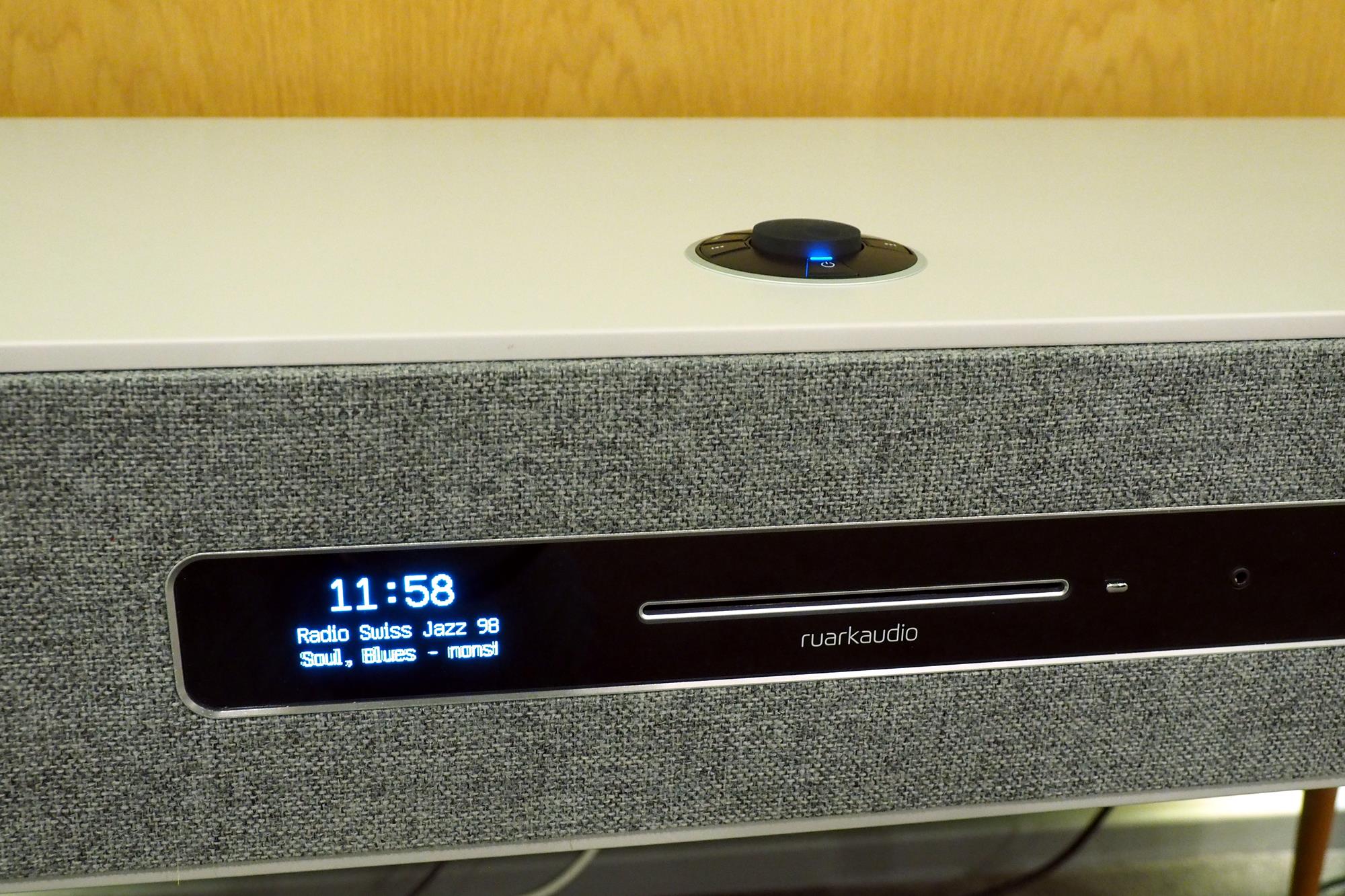 The successor to our Home Audio Product of the Year 2016 is another top-class product from Ruark. There’s nothing else quite like it.

Beautiful modern furniture married to one of the most versatile music systems around. Just sublime.