Naturally, the lack of an LED display panel means operation can be a little cryptic. For example, the little LED above the ‘Source’ button lights up in different colours – blue for Bluetooth, red for RCA and so on – but again it’s hard to see which colour it is from the sofa.

And compared with soundbars from the likes of Samsung or LG, operation seems a tad clunky, but that’s all part of Sub Zero II’s charm and doesn’t greatly interfere with your enjoyment.

The small, black remote control sports only a few buttons, spaciously dotted about its surface. Volume, input selection and mute are clearly labelled, while there are dedicated buttons for the three sound modes at the bottom.

Sub Zero II is a terrific performer for the money, offering a gratifyingly loud and dynamic sound. Bread and butter movie effects like explosions and gunshots get the oomph they deserve.

It’s not the smoothest or most powerful soundbar out there, but is among the best we’ve heard in the sub-£200 price bracket and represents a huge step up in sound quality from a flatpanel TV.

With our LCD TV connected to the optical input and Blade 2 in the Blu-ray deck, the Roth Sub Zero II tackles the movie’s hyper kinetic opening scenes with aplomb. As Blade chases down a group of vampires, the crack of his machine gun is crisp and aggressive, and he takes out two assailants on motorbikes amid a flurry of screeching tyres, clattering metal and rasping engines. The sound is fast and snappy, perfect for action-packed movies like this.

Sub Zero II’s greatest talent is bass reproduction – even without a sub, its drivers lend depth and punch to low frequencies with admirable tautness and agility. Humming motorbike engines exude a hearty rumble while bullets rip through bloodsuckers’ bodies with a tight pop. It sounds best in Movie mode, where bass is emphasised but balanced sympathetically with the mids and highs.

There’s also a decent amount of detail. The soundstage is embroidered with enough high-frequency information to make it feel open and airy, plus dialogue is delivered with depth and texture. 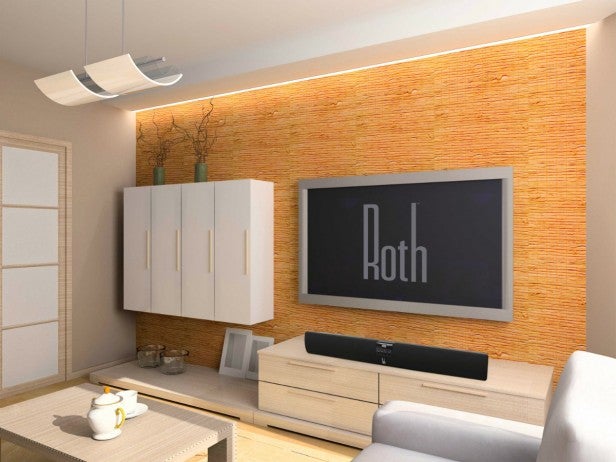 We watched a bunch of TV shows through the soundbar, including talk-heavy quiz shows and kids’ cartoons, and it improves them greatly, bringing the sort of volume, clarity and punch that TV speakers just can’t match. Don’t be tempted by the Voice setting though, which ironically makes speech sound nasal due to the emphasised mids.

Other negatives include a lack of width that leaves certain large-scale action scenes sounding contained. Also, some high-frequency effects sound a little strident at loud volumes, particularly during sword fights or when vampires burn up. But given its low price, such transgressions can be more readily forgiven and didn’t dramatically affect our enjoyment anyway.

To test Sub Zero II’s musical mettle we streamed Stevie Wonder’s Fulfillingness’ First Finale via Bluetooth, and it does a great job. Thanks to those built-in bass drivers, songs have a pleasing richness and warmth, beautifully blended with crisp hi-hats, punchy drums and Stevie’s natural-sounding voice.

Should I buy the Roth Audio Sub Zero II?

The Roth Sub Zero II represents excellent value for money and is a great purchase if you want to spice up TV sound on a tight budget.

Its loud, bassy sound is hugely enjoyable with movies, music and TV, offering more depth and volume than your average flat TV, while the inclusion of Bluetooth is a real bonus for the money. The design is impressive too – it’s compact, robust and tastefully styled.

However, a few budget shortcomings take the shine off the overall score, such as the rudimentary control system and the occasionally strident sound. But that aside, Roth has directed a soundbar sequel that’s even better than the original, all for a price that won’t break the bank.

Roth’s affordable Bluetooth-equipped soundbar puts TV speakers to shame with its loud, bassy performance. If you want to improve your living room experience without spending too much, it’s a great choice.