As far as iPod docks go, we’ve seen everything from the sublime to the ridiculous over the past few months at TrustedReviews. On the ridiculous side has been is TwinMos’ BooM China with its Chinese vase-cum-Chinese-restaurant styled subwoofer. On the sublime side was B&W’s expensive, but oh-so lovely Zeppelin iPod hi-fi system. And there have been plenty of others in between, including a portable dock from Bose and Gear4’s boxy BassStation.


The less said about that TwinMos system the better, but the Zeppelin is worth a mention in every iPod-related system review. It achieves what so few modern iPod-based hi-fis manage: to produce great sound quality while at the same time looking simply stunning. 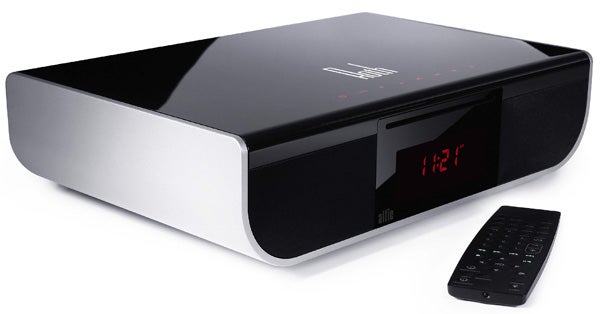 Next into the iPod hi-fi fray is Roth Audio, a small British company who specialise in producing esoteric valve-based amplifiers and, lately, valve-based iPod systems. Its systems look jaw-droppingly gorgeous and though the Alfie on review here is a departure for the firm – it’s not valve-based – it reflects the company’s design-focused ethos.


As with the B&W Zeppelin system Riyad reviewed, the design of the Alfie is sumptuous: wrapping the system front to back is a stretch of deep gloss black plastic, punctuated on the front edge by ruby-coloured, touch-sensitive control buttons. Running along the bottom and the sides is a thick aluminium plate, finished in attractive matte silver in a flat-bottomed U-shape. And on the front is a large, bright red LED display flanked by a pair of 6.35in built-in speakers. Take a peek underneath the Alfie and you’ll see a port revealing the presence of a 10.2in downwards-firing bass driver.


The iPod dock is in a heavily machined pop-out drawer at the rear and this exhibits the same attention to engineering detail. There are no fiddly catches or latches here – just push it in and the drawer slowly and quietly slides into view, though after this the mechanism for docking your iPod is disappointingly mundane – its simply a universal dock, with no clever universal support system.

It’s not quite in the same league as the Zeppelin, then, but it’s still a gorgeous piece of engineering. And it has a few more tricks up its sleeves than the B&W system too. In order to stand out, Roth Audio has not only included iPod connectivity, but also a slot-loading CD and DVD player, and an AM/FM tuner. At the rear you also have a 3.5mm input for non-iPod MP3 players, a 3.5mm headphone jack, and there’s even a clock alarm function that allows you to use any available music source – CD, iPod, AUX or the radio.


It’s a truly all-in-one device, then, so I wasn’t expecting sound quality to match the iPod-dedicated B&W system, and it isn’t as good. But with Roth Audio speakers inside coupled with the company’s experience in high end audio systems I was expecting more than the average iPod dock. I wasn’t disappointed. Though the 10W per stereo channel and 20W bass output doesn’t sound like much it’s can easily kick out enough volume to fill a medium-sized living room let alone a bedroom, and if you do find yourself pumping that volume right up to 11 there’s not a hint of distortion or break up.

A couple of quiet jazz numbers from Stacy Kent’s ”The Lyric” demonstrated that the Alfie is no slouch in terms of sound quality either. It’s a little on the warm side for my tastes, but clarity and even stereo imaging (surprising in such a one-box system) is pretty good. Close your eyes and you could convince yourself that the speakers were much further apart than a mere 30cm or so. Moving on, other sedate, acoustic music sounds just as good – a quick listen to Newton Faulkner’s ”Handbuilt By Robots”, and Sigur Ros’ ”Heim” reveal surprising cohesion.


Give it something a little more complicated to deal with – a touch of Metallica, perhaps, or a blast of big band courtesy of Georgie Fame – and weaknesses do begin to surface. Although instrument separation is actually pretty good, that bass driver can’t quite deliver the goods when it comes to punch, focus and control. The result is that music that should have aggression and attack begins to sound a little woolly and overblown. I found myself turning the bass down a notch or two from the default as it’s a little overbearing at first, and it also improves if you make sure the Alfie is sat on a solid surface. But it never reaches the level at which you could call it defined.

For video, there’s no HDMI port on the rear – you’re limited to S-Video and component – but this isn’t a big problem as component is perfectly capable of transmitting a top quality signal. And, as audio is built in, you don’t need the audio transport capabilities of HDMI. But even with a top-quality QED component cable hooked up, I found the quality to be no more than average. I popped Sigur Ros’ terrific ”Heim” DVD in and the picture on my 42in Samsung plasma was suitably atmospheric, but colours weren’t as punchy or bright and edges weren’t as crisp as they are on my standalone, upscaling Denon 1920. I’ve also seen better from sub-£100 upscalers from the likes of Toshiba and Samsung. 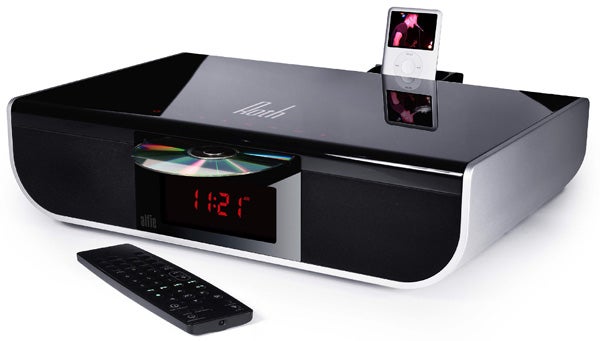 I also have some problems with the design and usability of the Alfie. That flat top, for instance, is the ideal place for a small LCD TV, yet if you were to take advantage of this, the telly would get in the way of that rear-mounted iPod dock. Stick Alfie in a rack underneath the telly and it’s going to be equally difficult to reach. Those touch-sensitive controls on the front edge aren’t the most responsive either – I often found myself wondering if a touch had registered or not – and I’d have liked to have seen a nicer remote control. Its blister buttons mean it’s not very nice to use, making it feel cheap and not in keeping with the rest of the system.


Having said all of that, there’s still a lot to like about Roth Audio’s Alfie. Though there are niggles with the practicality of the iPod docking system, it looks simply fantastic and is beautifully built as well. Audio quality can’t quite match that of the B&W Zeppelin, but it’s a cut above most iPod hi-fi systems, and though DVD output isn’t wonderful, there is compensation in the fact that you only need space in your system rack for one component. It’s not the ultimate in audio and DVD quality, but as a minimalist one-box system, for £350 this represents pretty good value for money.