We game journalists are a multi talented bunch. Few people are aware but, most writers has more jobs bubbling away on the side than your average member of parliament.

In the precious minutes I have away from writing about mobile, for instance, I like to give fitness classes, teaching all the poor, out of shape folk in the world how they can get a buff body like me. Let me tell you, it takes a lot of time and dedication to get a belly just like mine, so soft and bulbous that you can comfortably rest a 16 inch laptop on it while tapping out a review. The key to the Keith Andrew exercise plan, of course, is dexterity. The more difficult positions you can get people in, the harder it is for them to untangle themselves as you make off with their wallets.

Getting people to mimic the shapes you make, however, is easier said than done, which is what the oddly named Rop is all about. At your disposal are a number of nodules connected together with lines on a grid of hexagons, with a larger hexagon at the top of the screen indicating just what shape you need to replicate. Matching said shape is then a case of moving these nodules around until the lines that string between them pair up with the design of choice. 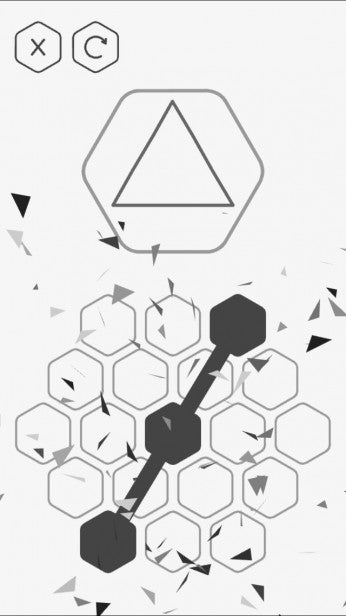 As you might expect, some of the early challenges are intentionally straightfoward – just the merest of rearrangements enough to form the desired shape – though Rop predictably begins to up the ante as the stages pass by, with more convoluted shapes being matched by nodules strung together in increasingly complex ways.

What makes Rop especially difficult is the fact that only one nodule can rest in a spot at any one time. So, not only does this mean that working out what nodules go where is often something of a case of trial and error, it means that manipulating your tools so you can even position the nodules into the right slots is an exercise in itself, akin perhaps only to attempting to solve a Rubiks Cube. Moving the nodules around can often make the task even stickier, and levels quickly become a case of chasing your tail, shifting the chains around inside the hexagon before finally finding the ideal arrangement. 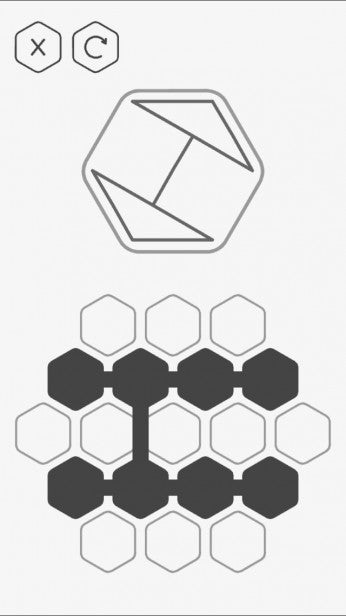 It’s the simplicity of the approach and the minimalist nature of Rop’s delivery that really sells it, however. Like taking on a crossword puzzle in your daily newspaper, MildMania had made no effort to tie play to any particular plot or setting – it’s simply a case of evaluating the task ahead of you, plugging your brain in and attempting to master the level in question. There are no points on offer, no scoreboard and no bonuses for completing a stage in quick time. Your only reward is the knowledge that you’ve bested Rop, level after level, in your own time and at your own pace.

What is on offer instead, however, is the accompaniment of slightly eerie piano music balanced out with a sharp sting whenever you make a rogue move, the former subtly blocking out all distractions and the latter sharpening your focus whenever you make a mistake. It’s the equivalent of being locked in a padded cell to aid your concentration, only to be regularly poked with a big, sharp stick whenever your mind slips. 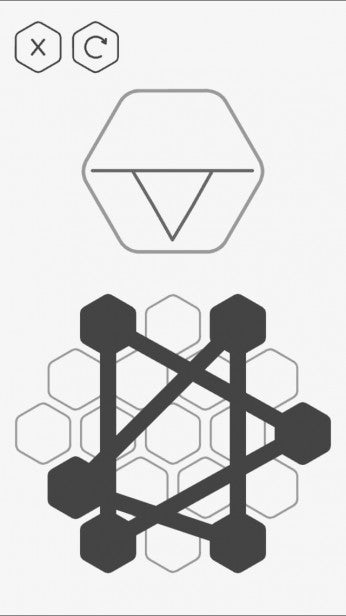 Combined with some particularly slick and inventive visuals (the game requiring you to pull down on a chord linked to the Rop logo to open up the level select screen upon start up, for instance, proves surprisingly satisfying), MildMania has managed to give substance to what is, at its base level, a very simple complex. With only 77 levels available in this initial burst, it may need the release of the hinted at ‘second package’ of stages before Rop becomes a bona fide must buy.

For what’s on offer, however, Rop is engaging enough for dedicated puzzle enthusiasts and welcoming enough for newcomers looking to put their brain cells through their paces for the first time. The fact there’s only one game mode and there’s no other dressing on offer nevertheless does mean that this is the kind of game that, once you’ve exhausted the shapes in the initial package, will be as useful to you as that gym membership you’ve not made good on for several months now.

Verdict
Challenging and delivered with finesse, Rop is a no frills puzzler that offers the kind of tests that fit handily into any free time you have without burdening you with needless plot points or a pointlessly extravagant settings.