What is the Rollei Actioncam S-30 WiFi?

The Rollei Actioncam S-30 WiFi is a low-cost sports and activities camcorder, which despite its sub-£120 price includes WiFi remote control capability. Considering the price of WiFi-capable cameras from bigger names, such as the GoPro HERO3 Black Edition or Garmin VIRB Elite, the S-30 seems like a deal too good to be true. So what has Rollei left out to get the cost so low? 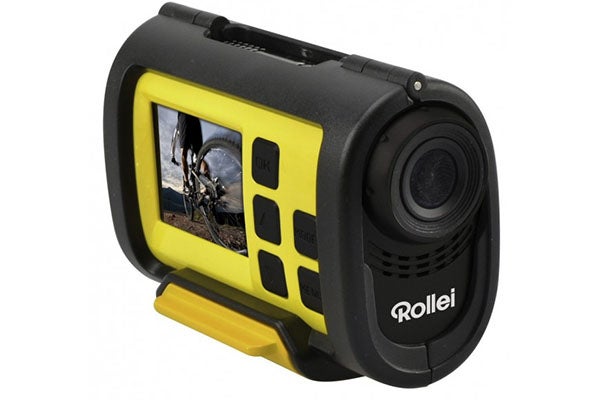 The S-30 is based around a CMOS sensor of unspecified size but with a resolution 2Mpixels, which is just enough for the  Full HD video it records. This is performed at 30 frames per second, but it’s also possible to capture 720p at 60 as well as 30 frames per second. The S-30 can take still images at up to 2,560 x 1,920, although this will require a little interpolation with just 2Mpixels of sensor resolution available. Aside from grabbing single images, three, five and ten-shot continuous shot settings are also available.

There are three quality modes, allowing footage to be recorded in MOV or AVI format at data rates of up to 13Mbits per second, which will allow reasonable if not outstanding quality. A microSD card slot is used for storage, with support for modules up to 32GB. With the latter, there will be enough space for five and a half hours of footage at the top quality setting. However, a memory card is one thing Rollei doesn’t include in the box, which is not a huge surprise given the price. You do get a copy of Corel VideoStudio X6 bundled, though. 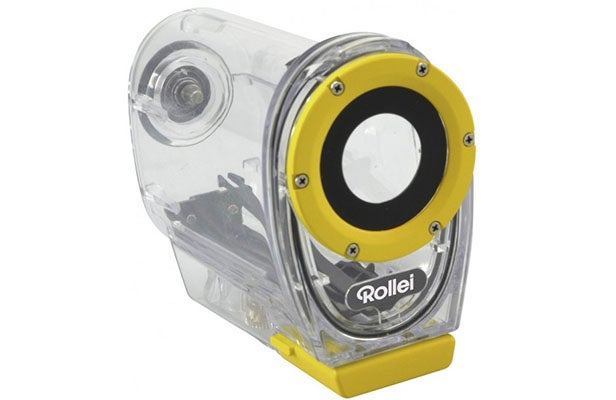 Rollei rates the S-30 as waterproof to a depth of 10m, and shockproof against a drop from a height of 3m, although neither of these are backed by any particular international standard. You also can’t have both at the same time, as the waterproofing requires an underwater housing, which is included in the box, whilst an alternative housing protects the camcorder from impact.

Not only does the S-30 come with these two different housings, but the box is also full of mounting options as well. A couple of robust double-sided adhesive pads are included, for sticking one of the mounts to a helmet. There are two bases – one for screwing to a bike handlebar, plus the helmet option, which can also be strapped on rather than stuck. 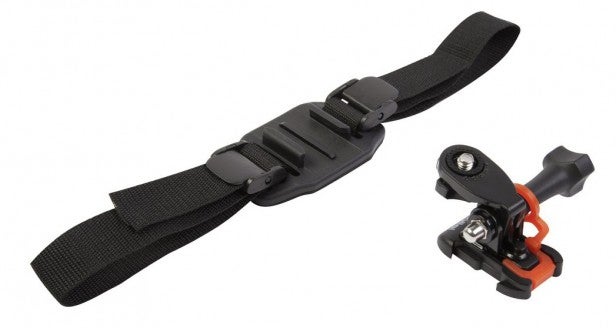 There are then three different arms you can attach to either base, and finally the screw plate, which can be attached to either the robust or waterproof housing. So the S-30 already comes with plenty of attachment options, and there are still more available from Rollei’s website, including chest and shoulder mounts, suction mounts for cars, and a number of others. The S-30 itself is available in orange, black and yellow, to suit your outfit. It’s also amazingly small, weighing just 75g.

Yet another amazing inclusion for the price is the 1.5-inch LCD panel. This is located on the side, so won’t allow you to use the S-30 like a regular camcorder, but will be great for selecting menu options and ensuring you are pointing the camcorder in the right direction when positioning it on a mount. It’s certainly great to see the LCD’s inclusion when even the GoPro only offers a panel as an add-on accessory. 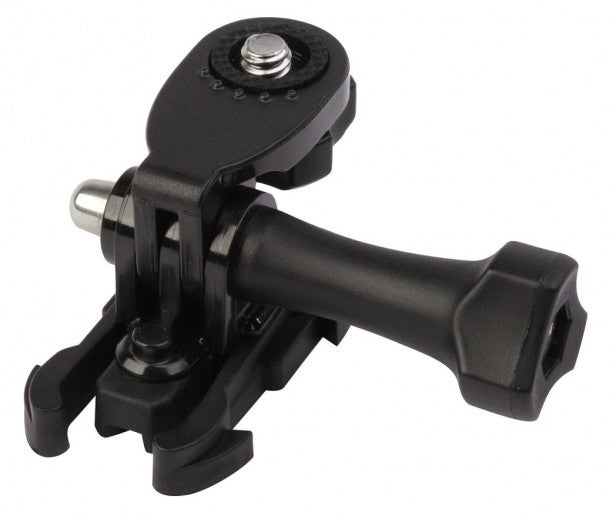 The availability of a menu means the S-30 can offer a few more settings
than most action cameras, which usually only provide the ability to
toggle record. The S-30 provides options to set the ISO from 50 to 800,
as well as leaving it on auto, but only in photo mode. Metering can be
changed from centre-weighted, to multi-point, to spot. There are
daylight, cloudy, tungsten and fluorescent white balance presets as well
as automatic, but no manual option. Both of these settings are
available with video as well as still image capture.

There
is even the facility to vary exposure between -2EV and 2EV, but no
direct control over shutter or iris, unsurprisingly, and again this is
only available in photo mode. No scene modes are available either, and
with the waterproof housing we would have liked to have seen an
underwater colour compensation filter, although the S-30 appears to be
more targeted at surfers than divers. In video mode there are
some digital filters, which include red, green and blue alongside sepia,
negative and black & white options. The menu buttons also let you
turn on WiFi mode and turn off the screen, which is handy for preserving
battery life. 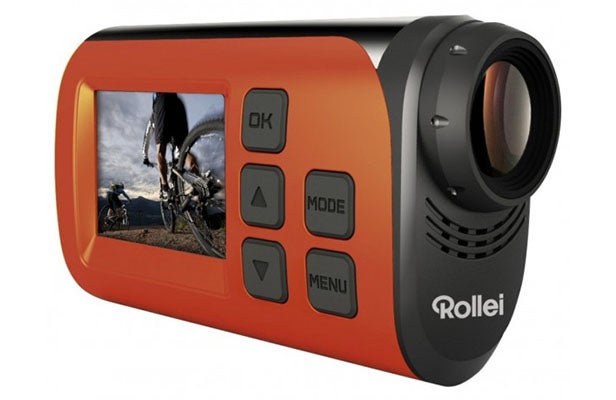 The
most surprising feature of all of the S-30 is of course WiFi control,
which is normally something only found in premium models. The usual
system applies, whereby you set the camcorder up as a WiFi hotspot, then
connect your smartphone to it. You can then fire up the Rollei app,
which is available for Android and iOS. This allows you to preview what
the camcorder is seeing, toggle record, and even configure some of the
settings, including continuous shooting mode, white balance, and
frequency (to compensate for mains light flickering). Best of all, the
preview continues even when you’re recording, unlike some WiFi
implementations, notably the Garmin VIRB’s.

The
S-30 has a 120-degree field of view, so picks up a fair chunk of the
action around it. Image quality in good lighting is decent, but not
outstanding. Colours are reproduced faithfully, but there is evidence of
noise and grain, which slightly mars the level of detail. This is more
evident as the light drops. Colour fidelity remains reasonable in poor
illumination, without a high level of compression patching. But the
image is not as bright as top-end models like GoPro’s HERO3 Black
Edition can produce. 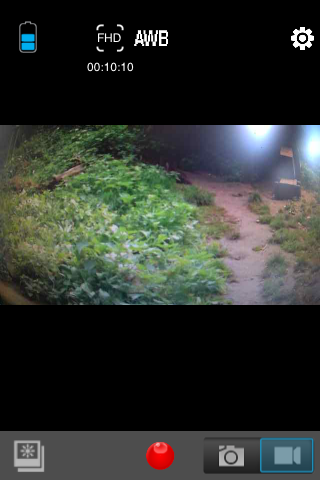 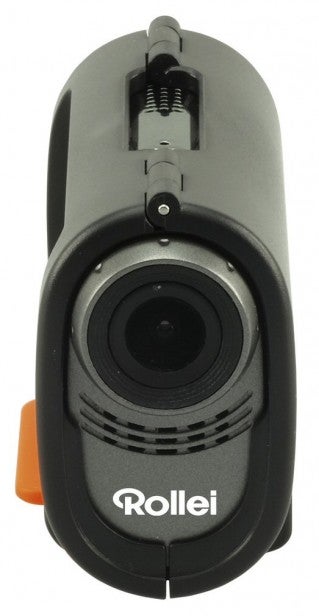 Should I buy the Rollei Actioncam S-30 WiFi?

The
Rollei Actioncam S-30 WiFi provides a lot of features for the money,
and the bundled housings and mounts don’t show any signs of cost
cutting. Image quality is a step behind more premium units like the GoPro HERO3 Black Edition or
Garmin VIRB Elite. But considering the price and WiFi
functionality, if you want to capture your extreme sporting moments like
the professionals but on a more modest budget, the Rollei Actioncam
S-30 WiFi is incredible value.

The Rollei Actioncam S-30 WiFi gives you a lot of extreme sporting camcorder for your money, including WiFi control.