What is the Rollei Actioncam 425?

The action camera market is filled to the brim with companies trying to match GoPro’s quality at a fraction of the cost, and Rollei is no different. The company currently has a range of four action cameras. The model reviewed here – the Rollei Actioncam 425 – sits one down the pecking order at around £100.

The Actioncam 425 can shoot 4K video at 25fps, 2.7K video at 30fps as well as Full HD at 60fps. That’s impressive considering its price. There are some other nifty features as well, such as integrated Wi-Fi with a 20m range. While on paper this all sounds very impressive, unfortunately the Actioncam 425’s performance falls right in line with its price tag.

From a distance, the Rollei could be mistaken for a GoPro. It’s a reasonable size, not too heavy when worn on the head, and has a reassuring feel to it, even if it does just have a plastic body.

Similar to most higher-tier models, it has a screen on the back. However, a large bezel does cramp it a bit, and instead of filling the width of the back, it’s a fraction of the size. At 2 inches, it’s not actually that small, it just makes poor use of the available space considering the camera’s size. 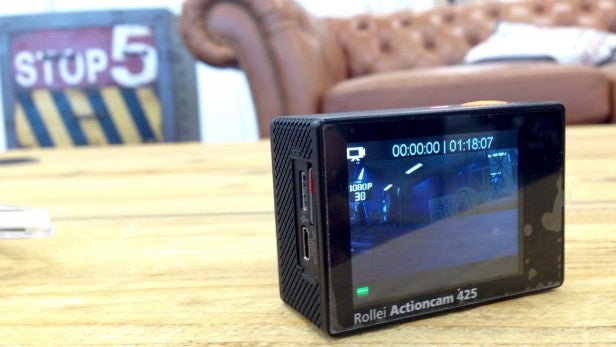 The display is not particularly sharp, either, with its low 320 x 240 resolution, and I found the colour temperature erred towards looking cold. The camera was tested a lot over late summer, with beautiful warm days and golden sunsets to which the display couldn’t do justice.

Equipped with just four buttons, the Rollei has a sleek design. When outside the case, button feedback is good, with a pleasingly tactile response. However, put the camera in its plastic waterproof casing and it’s difficult to tell if a push has registered due to its mushy feel – resulting in constant double-checking.

Happily, switching modes was simply a case of pressing the front button. A short press switches from video to still images and from time lapse to burst photos. You can also cycle through the settings, allowing control over the usual options such as frame rate and resolution.

To select a mode or to make a change requires a press from the top button, which is also the shutter button used to take photos or start recording. The built-in Wi-Fi is activated using the arrow keys on the side.

In terms of mounting, the Rollei comes with two sticky mounts, one of which I stuck to my helmet. Once firmly pressed down, the mount was safe and secure and never started peeling. 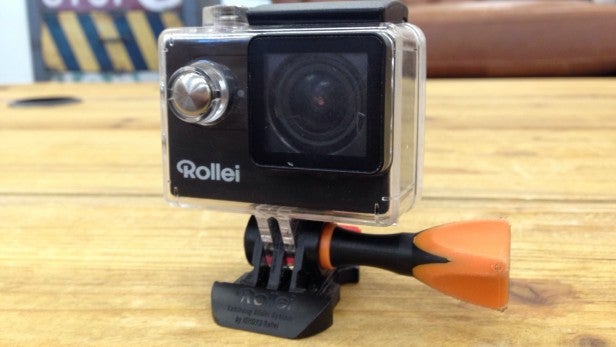 Also in the box was a tripod mount, necessary for those wanting to shoot timelapses, as well as a spare backdoor and a wrist remote.

The latter was great while it lasted, removing any anxiety about successfully starting a recording. Sadly, it just didn’t last very long. Supposedly waterproof down to 1m, it quickly succumbed to the rainstorm it was used in – throwing in the towel after 5-6 uses.

The waterproof case fared far better, protecting the camera through the rainstorm as well as when being dropped in puddles and splashed on no end. However, it too eventually succumbed to wear and tear. Over the test period the plastic covering of the lens became scratched, clouding all the footage I subsequently shot.

The Rollei does come with a companion app, through which you can control the camera, transfer files and edit footage. The camera and your device connect via the Rollei’s built-in Wi-Fi, which offers decent range and allows you a live view from your phone.

There’s only a little lag when connected. However, it is useful for playback duties or if you want to pay particular attention to composition when the camera’s mounted out of the way. Be warned, though – it’s guaranteed to drain the battery of both the camera and your phone.

In terms of battery life, I found I got around 1 hour 30 minutes of recording. A mixture of standby time and recording saw me net around 2 hours 30 minutes before the battery gave up. Luckily, the battery is user replaceable, so you can carry spares if needed. 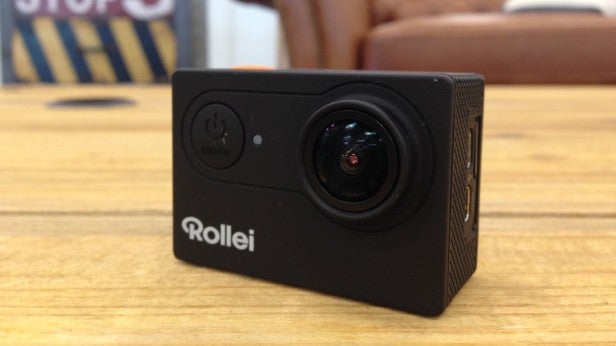 Editing through the app is basic, only allowing you to trim footage. Unlike the GoPro app there’s no option to place clips together, automatically create an edit, or export to Instagram, Facebook or Twitter.

There are three connections on the Actioncam 425. There’s a Micro HDMi output for an external display, a microSD card slot and a Micro USB port for charging. In terms of microSD cards, I used a 10-speed card, as recommended in the manual, with no issues.

What the Rollei does well, though, is customisation of settings. In 1080p, the frame rate can be changed between 60fps and 30fps. For the period of the test, I stuck to 30fps, finding 60fps to give footage a slightly frantic feel – as if sped up in post-production.

Exposure compensation is customisable from -3.0 to +3.0, and anyone who’s used basic camera functions will be able to master this.

Finding 4K on a camera of this price is a surprise in itself. Discovering the footage to be pretty decent is an even bigger shock. While I largely filmed in 1080p Full HD, I found the footage to be of good quality and very crisp. What’s more, the stability of the recording, considering the camera was mounted on my head, was superb.

Colours, however, were a little cold and perhaps a bit dull – the footage lost the vibrancy of the beautiful summer days.

Exposure was a little off, as the sky always appeared blown out in footage, losing any colour. Happily, there were no issues with underexposure, and the camera never darkened footage. The Rollei picked out detail impressively, especially considering its price point. 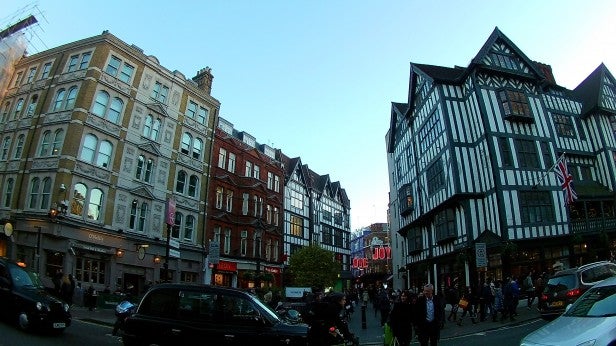 Where this camera is let down, though, is with its still image quality. In a world where an action camera’s biggest selling point is its still image capability, the Rollei 425 isn’t up to scratch. It offers options from 12-megapixel to 4-megapixel, although the sensor is actually only 5-megapixel and it uses interpolation to achieve the higher resolution.

Things don’t improve when it gets dark, either. Low-light photos were soft and hampered by noise. As a photographic rather than video tool, the Rollei is at the back of the action cam bunch. 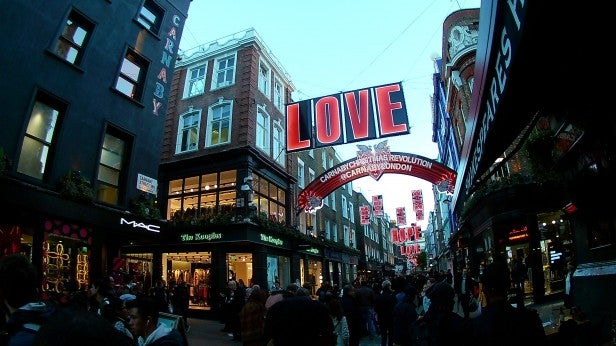 In terms of sound, the quality of the Rollei 425 was a gift and a curse in equal measure. The protective case blocks sound, meaning footage is muted due to obscuring the microphones. In fairness, this is a complaint of most action cameras.

While this means footage isn’t overwhelmed by wind passing over the microphone, it can lend a disconnected feeling to the footage. The good news, though, is that the muted microphone doesn’t catch you huffing and puffing your way around a trail.

Should I buy the Rollei Actioncam 425?

If you’re looking to only shoot video footage, the Rollei will get the job done at a fraction of the price of its competitors. It’s got top-flight specs, shooting up to 4K at 25fps and 1080p at 60fps, plus the image quality looks good for the money.

However, in a market increasingly defined by the quality of an action camera’s still images, the Rollei Actioncam 425 is severely lacking. Add on the flimsy accessories and that great price tag suddenly looks a lot less impressive.

Sure, it records good video footage, but an action camera needs to be so much more than that. The Rollei Actioncam 425 is let down by its poor still image quality and shoddy accessories.