Roku isn’t quite a household name in the UK, but you shouldn’t count this US-based company out. It’s well deserving of a place under your TV.

The Roku 3 is the company’s third-generation player and it’s currently the best model available to buy here in Britain. Roku launched the more advanced Roku 4 in the US last October, but that’s still unavailable in the UK, with no word on a release. What gives, Roku?

Anyway, Roku is one of the more versatile players on the market, supporting over 1,700 streaming channels in the UK. But it has rivals aplenty: Google Chromecast 2, Amazon Fire TV, and a raft of boxes from the likes of Sky, Virgin, and BT, all gunning for the limited space beneath your TV.

I’ve used the Roku 3 for around three months now, and it’s quickly become my favourite way to watch TV. Here’s why. 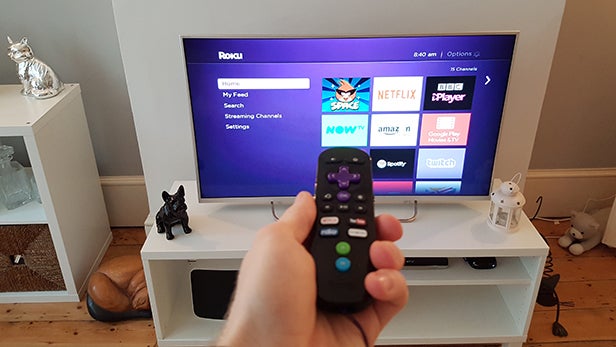 One of the best things about the Roku 3 is its tiny form factor. It’s about the same size as five drink coasters stacked on top of each other, and has shiny, black casing that looks great just about anywhere. It’s a breath of fresh air when compared to heftier broadcaster boxes like YouView or Sky’s +/HD/Q players.

A single cable plugs directly from the Roku 3 to the mains for power. There’s an ethernet port (no cable supplied). It supports dual-band Wi-Fi connections too. You can plug in local content using the USB or microSD ports, and a supplied HDMI cable connects the Roku to your television.

The Roku 3 comes with its own remote control – it takes two AA batteries, and is yet to die on me. It’s a fairly standard controller; it’s small, has the usual directional and ‘OK’ buttons, plus ‘back’ and ‘home’. There are also direct-to-app buttons for Netflix, Rdio, YouTube, and the Google Play store. If you turn it sideways, you can use the ‘A’ and ‘B’ buttons and arrow keys like a game controller too.

The most interesting thing about the remote control is that it comes with a 3.5mm audio jack. This means you can plug headphones into the controller and listen to the audio of whatever you’re watching on TV. It’s a great way to catch up on a TV show or movie without disturbing the rest of your house. However, it’s rare that my girlfriend and I won’t be watching the same show, so I didn’t find much use for this. 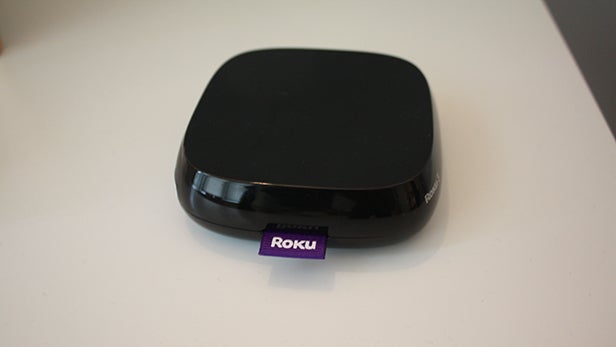 Once you’ve connected all the requisite cables to your Roku 3, it’s time to actually set the thing up. Fortunately, this is an easy process that took me a grand total of three minutes.

You choose your language, connect to a Wi-Fi network, go through any software updates, at which point you’ll be prompted to activate your Roku. The Roku 3 generates a five-digit code, which you need to enter on a PC, phone, or tablet. This is so you can link your Roku 3 to your Roku account. You can also create a PIN to prevent accidental content purchases on your Roku. And that’s it, you’re done.

Well, sort of. You’ll still need to enter all of your passwords to Netflix, Amazon, or whatever other services you use. But that’s just one of the pains of modern living, and if you stick with the Roku ecosystem then these log-ins will be saved for posterity.

Once you’re set up, you can finally get around to watching things. There are five main tabs on the Roku 3, the first of which is Home. This is where all of your favourite channels are saved, and it’s intended as a quick-access feature. You’ll want to store your most-used channels here, like Netflix or BBC iPlayer. I have 15 channels saved, most of which are TV/movie services, plus Spotify, and a couple of games. It’s a really simple grid layout, and keeps faffing around to a minimum.

Then comes Search. This is one of the Roku 3’s best features, because it’s a universal search. That means you can search for a movie, TV show, or actor across multiple channels at once. It might sound like a simple feature, but it involves Roku having to get third-party services on board. That’s one of the reasons why many media players don’t offer universal search, including the rival Amazon Fire TV. Even Roku only offers it for select channels, which include Netflix, Amazon Video, Google Play and, most recently, Sky’s Now TV. 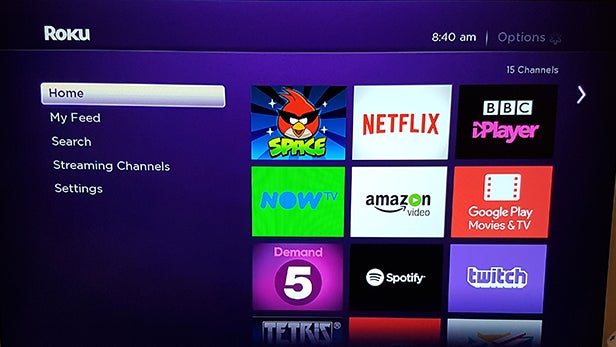 One of the best bits about Roku Search is that it will also show you where the movie you’re trying to find is cheapest. Maybe it costs £2.50 less on Amazon Video than Google Play. Maybe it’s free on Netflix. Rather than having to trawl through each service to find pricing, Roku tells you right off the bat.

The next tab is Streaming Channels, and it’s basically a giant store where you can download new apps. It’s categorised, so you can browse sections like Film & TV, Comedy, Educational, Good, and Games. There are also more curated sections like Featured, New, and Most Popular. And when all of those fails, there’s always the search bar.

Last, and probably least, is Settings. This is where you can change your UI theme, the screensaver, display and audio settings, set up Wi-Fi or wireless connections, and find software updates. Cracking stuff.

Roku ticks all of the boxes in terms of being a capable, user-friendly UX. But its best feature has nothing to do with design or layout. The Roku 3 is fast. Really fast. There’s basically no lag when browsing through the menus or within apps. No annoying loading screens. No juttering animations. The software is optimised really well, and it makes all the difference. I’d choose the nippy Roku 3 over my plodding Sony Bravia smart TV or BT YouView box based on this alone.

The big reason why you’d choose the Roku 3 over some of its rivals is its wealth of apps. Roku supports over 1,700 streaming channels in the UK, and over 3,000 in the US. That means I can’t list all of them, but I can reel off some of the more popular ones to set your mind at ease:

There’s also the Roku Media Player, which lets you navigate local storage on a connected USB flash drive or microSD card. For content on your phone, you can also cast to the Roku 3 via the Roku app.

Related: What is Spotify Video?

Games and apps feature on the Roku too, although it seems like they’re there to tick a box rather than serve a useful function. Facebook, Angry Birds, Firefox, Tetris – I never really used any of them beyond ‘giving them a go’.

The Roku 3 streams at a maximum resolution of 1080p – that’s Full HD. You can also downgrade to 720p if your TV only supports basic HD resolutions. For those with a 4K, your luck is out. This is probably the major downside of the Roku 3, considering the growing popularity of 4K televisions. The Roku 4 is the first (and only) Roku to support Ultra HD content streaming, but it’s not available in the UK. Nonetheless, Full HD content still looks great, and if you don’t own a 4K TV then this is no reason to be put off. Plus, there’s hardly an abundance of 4K content available right now anyway. 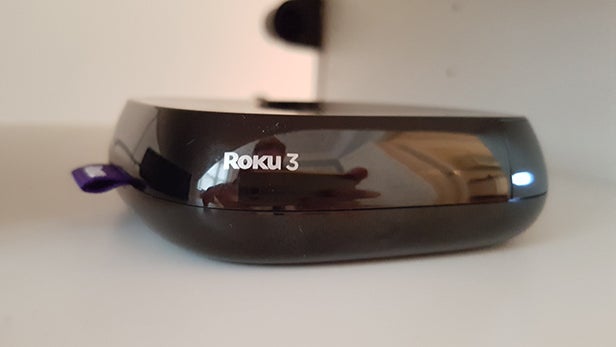 Should I buy the Roku 3?

When considering a purchase of the Roku 3, you need to weigh up your other options.

The Amazon Fire TV is cheaper at £80, but I’d recommend springing for the Roku 3 instead. In our Fire TV review, noted problems included buggy software, prioritised Amazon content, and a lack of universal search. All those problems are non-existent in the Roku 3, so spending a little more is worthwhile. Also note that the Amazon Fire TV doesn’t give you access to the Google Play Store, which is a real shame.

The Google Chromecast is another good alternative, and costs significantly less at £30. Unfortunately, it’s not really a set-top box so much as a casting device. That means you don’t have an EPG or any real user interface to speak of. It’s great, but it won’t suit everyone. Chromecast also lacks a lot of the gaming that’s available on the Roku, and you can’t access Amazon Video either. Plus, having a Chromecast depends on owning other devices like a laptop or mobile phone, which isn’t ideal for some users.

At £95, the Roku 3 is certainly an expensive piece of kit. But it’s easily the most refined media player I’ve ever used. It’s super quick, easy to browse, and gives access to a very wide range of apps. I have a Google Chromecast, a BT YouView Box, a Sony Bravia TV, and an Xbox One, but the Roku 3 is basically the only device I use to watch television now.

The Roku 3 might be expensive, but it’s a great media player with an impressive breadth of content and an easy-to-use interface. You get what you pay for, after all.

The Roku 3 is my favourite way to watch TV and, pending a miracle, will remain so until I can get my scone-fondling British mitts on a Roku 4.