Rogue Trooper Redux is a flawed yet enjoyable trip down memory lane. Rebellion Games’ 2006 original for PS2, Xbox and PC has been fully remastered, complete with a new control scheme and a few neat online features. It’s certainly not perfect, hindered by unorthodox design decisions and repetitive environments that sadly show their age. That aside, it’s still a uniquely charming third-person shooter, carried by its tongue-in-cheek narrative and quirky characters all heightened by a real sense of cheesy nostalgia for the 2000 AD universe.

You play as Rogue, a super-soldier created with one purpose in mind: violence and all-out war. Rogue is genetically superior, with his rock-hard abs, enhanced intelligence and an extreme proficiency with firearms. Unfortunately, this doesn’t prepare you or your squadmates for the hell that waits upon Nu-Earth – the main playing field of Rogue Trooper Redux. Rogue’s brethren are immediately wiped out, left with nothing but biochips that can be inserted directly into the player’s equipment for a range of shenanigans.

This is one of the core ideas that helps Rogue Trooper Redux be something other than a generic third-person shooter. Despite your comrades not having a physical presence, they’ll still partake in silly banter and provide tips; their souls reside in assault rifles, helmets and other parts of the usual military arsenal. One of my friends – now inside my rifle – could be left by an open door, keeping an eye out for reinforcements while simultaneously picking them off as a mobile turret. It’s a shame the AI is so brain-dead that it will often stumble into the oncoming fire anyway. 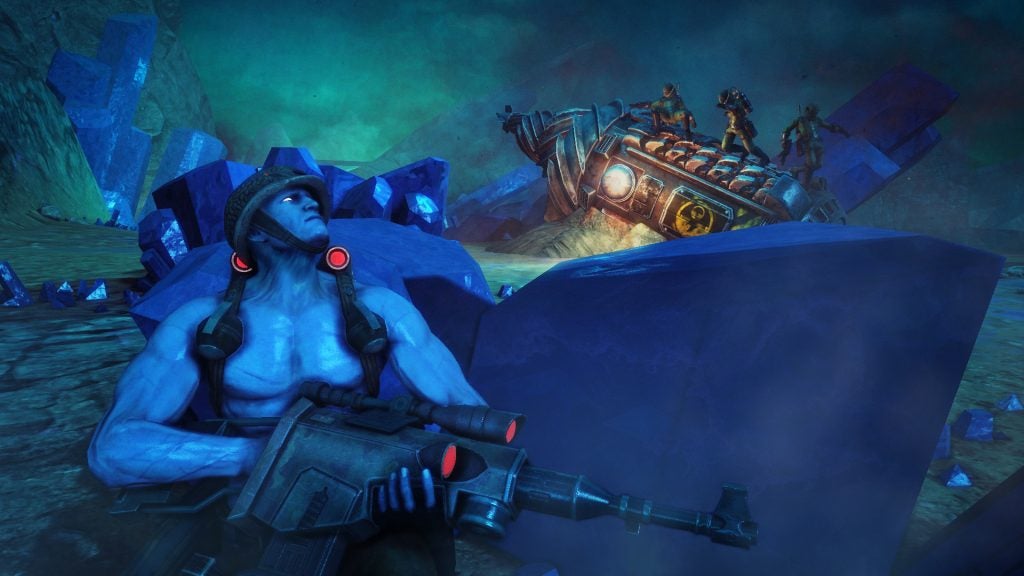 The entirety of Rogue Trooper has been lovingly refined in Redux. Character models are sharp and memorable while environments, despite archaic geometry, feel bleak and atmospheric as mortar fire exploded all around me. It’s a stellar remaster, showing that a shooter from over a decade ago can still hold its own in some regards. Unfortunately, the same praise can’t be lauded upon its sub-par gunplay.

While its shooting feels ropey compared to the likes of Gears of War or Uncharted, Rebellion has made some noticeable improvements that make it more straightforward to play. The cover system has been completely revamped, making it far easier to duck behind nearby walls and hide away from enemy fire. Blindly firing from cover is grossly inaccurate, with Rogue seemingly incapable of aiming without his eyes firmly cemented on a target.

Starting with an assault rifle and pistol, Rogue’s repertoire of destruction grows with each passing level. I soon found myself in possession of a powerful shotgun and utterly devastating mortar launcher for wiping out heavier enemy units. These new additions are introduced at an ideal pace throughout Redux, ensuring that things stay fresh as the same generic baddies march toward you like brain-dead cannon fodder.

Salvage is a crafting material that can be found in each stage and on the corpses of defeated soldiers. This can be used to craft armour, upgrade weapons and add new abilities to your arsenal. It’s simplistic but effective and made me feel like Rogue was growing stronger with each subsequent tweak I made to his load-out. Having to constantly stay on top of crafting ammo and med-kits also lends an aura of strategic urgency to the more intense firefights. 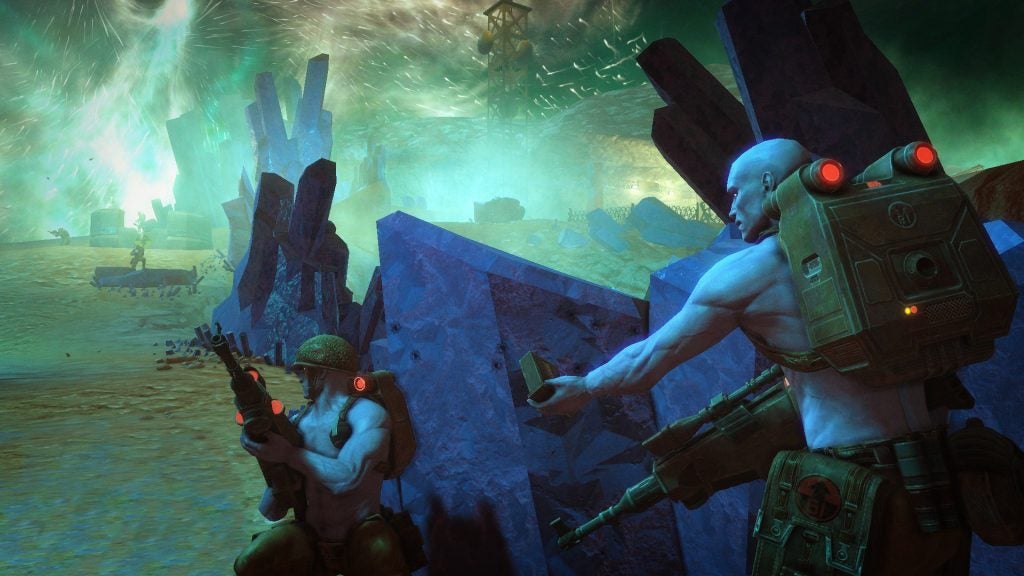 Rogue Trooper makes some admirable attempts at stealth – but, sadly, it doesn’t feel as effective as just blasting soldiers away the second I see them. Rogue moves far too slowly to make sneaking about seem like a truly viable option. It arduously interrupts the flow of an otherwise bombastic third-person shooter. One exception to this rule is turrets and alarm systems that are capable of spotting the player from afar. Taking these out without being noticed is fun, especially when emerging triumphant and unscathed.

The predictable flow of running and gunning is occasionally shaken up by a stationary turret section or two. Here you’ll be tasked with wiping out an oncoming tank or preventing a barrage of soldiers from storming your current position. Watching your foes comedically fly about the screen in response to gunfire is unintentionally hilarious, and never failed to crack me up. Sniping from afar results in a similar display of slapstick acrobatics that gives Rogue Trooper Redux a strange yet lovable charm.

Other sections have you firing a colossal launcher while aboard an aircraft, tailing your nemesis through narrow cliffs and gorges as enemy missiles fly relentlessly toward you. These sections are a neat palette cleanser but don’t try anything I haven’t seen before, and the remaster does little to disguise their mundanity. They lack the sense of creativity the straight-shooting levels granted me, even if it only extended to a few potential outcomes in each firefight. 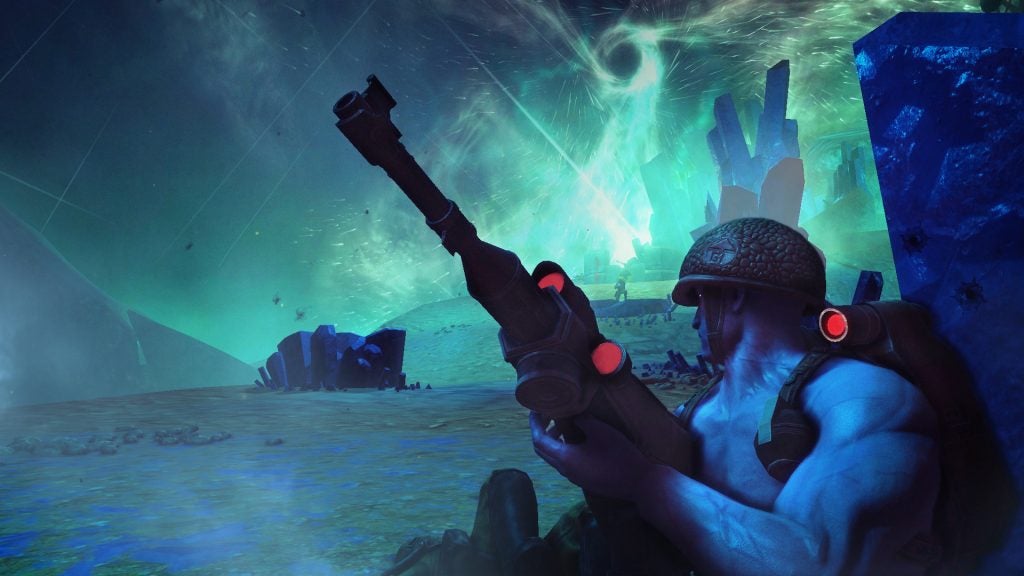 Rogue Trooper Redux dabbles in online multiplayer, including a co-op mode taking place before the main campaign. Stronghold and Progression can be played alone or with up to four friends. The former sees you defending a specific position from oncoming forces. It’s tense, and working together with friends to defend a constantly dwindling position can be exciting. However, without the solo campaign’s malleable abilities it quickly grows stale.

Progression is a little different, following me and my buddies as we fought valiantly to reach a nearby safe zone. Ensuring we all stayed alive and supported one another with appropriate covering fire was enjoyable, but far too simplistic for its own good. There simply isn’t enough complexity here to keep me coming back for more.

Rogue Trooper Redux is an impressive remaster of a shooter that doesn’t quite hold up when compared to its modern competition. That being said, it’s still a fun, atmospheric and wonderfully charming outing with a few neat tricks up its sleeve.