Rock Direct is a company that has managed to produce a succession of impressive notebooks at affordable prices. The Pegasus 650 continues that tradition and adds innovation to the mix. Unlike most of the Rock notebooks I’ve looked at recently, the Pegasus 650 is based on a Pentium M platform, rather than a full size desktop chip. This makes the machine far slimmer and lighter than the high-powered mobile gaming notebooks that Rock is well known for.


Despite being far more svelte than say, the Rock Xtreme Ti, it’s not what I’d call a thin and light machine. Weighing in at 3kg, the Pegasus 650 will make its presence felt in your bag, while the dimensions of 326 x 278 x 31 (WxDxH) mean that you’ll need a reasonable amount of room in that bag too. That said, it’s not much larger or heavier than other 15.4in widescreen notebooks – if you want a decent size screen, you’re going to have to put up with a bit of extra girth and weight. 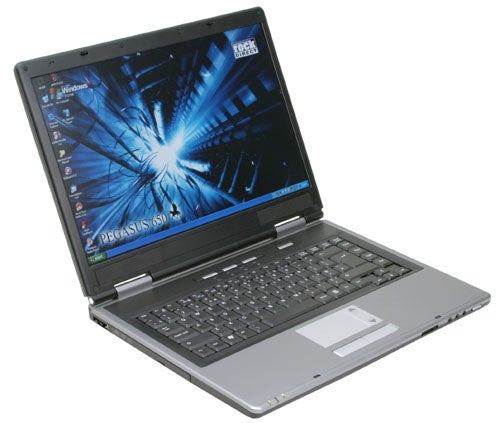 The notebok itself looks pretty good, and you can have the lid finished in a range of striking colours. The coloured lids come at no extra cost, unless of course you opt for the two-tone chameleon finish which costs £50 extra – if you’ve ever seen how great a TVR Tuscan looks with this paint finish, you’ll probably agree with me when I say that this would be £50 well spent.


Once you open up the lid you’re greeted with the 15.4in widescreen display. Many notebook manufacturers make the mistake of including a large screen, but then equiping it with a relatively low resolution. Thankfully Rock hasn’t fallen foul of this mistake and the screen on the Pegasus 650 sports a resolution of 1,680 x 1,.050 – pretty much perfect for the physical size. With this resolution you’ve got more desktop real estate than a 19in desktop PC monitor, making it easy to work with multiple windows open concurrently. The screen itself is a decent example and exhibits even lighting accross the surface, with no dead pixels. The viewing angle is also admirable – an important factor if you’re planning on showing presentations or demonstrations to others. 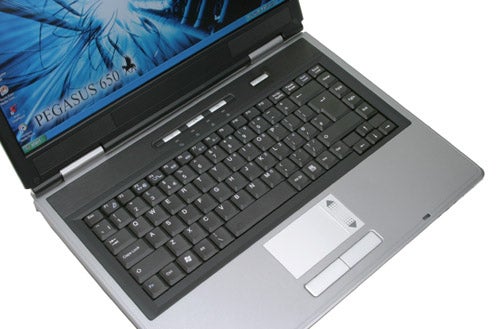 The keyboard is surprisingly good. Each key is a good size and has a tactile, textured feel. The Shift, Caps Lock, Tab, Backspace and Return keys are all large, making it easy to hit them when typing at speed. Each key exhibits a good amount of travel, while the solid break and spring back throw your fingers back up ready for the next strike. The cursor keys are also removed slightly from the main keyboard making them easy to use. In fact the only negative aspect with the keybaord is the fact that the Fn key is in the bottom left corner where the Ctrl key should be.


Below the keyboard is a large touchpad with a separate vertical scrolling area. I do like the fact that the scrolling area is separated by a raised ridge, so you don’t stray into it by mistake. Below the touchpad are two large silver buttons which respond with a reassuring click when pressed. 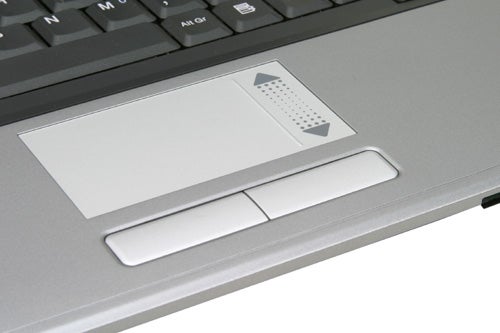 Inside the spec is pretty impressive with a 2.13GHz Intel Pentium M processor driving things along nicely. The CPU is supported by 1GB of DDR memory and a capacious 100GB hard disk. The graphics solution is where the innovation that I mentioned earlier comes in, since the Pegasus 650 actually has two graphics controllers. Being that the machine is based on an Intel 915GM chipset, you’ve got an integrated Intel graphics chipset. However, Rock has also installed a 256MB nVidia GeForce GO 6600 chipset along with a hardware switch to toggle between to two.


Now, you may be wondering why you would need two graphics chipsets, but the answer is simple – you get the best of both worlds. Whereas the integrated Intel graphics solution isn’t what you’d call high-end, it will give you far better battery life than the nVidia discrete graphics. So, the idea is that when you’re plugged into the mains you can use the nVidia graphics, and when you’re running on battery power you can use the Intel solution. In practice this works very well, although the machine does require a reboot in order to switch graphics solutions. 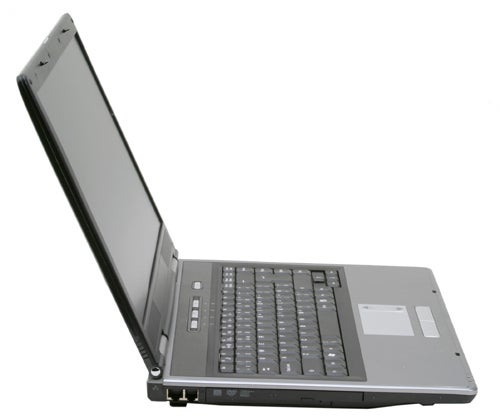 The different graphics chipsets definitely made a difference to battery life. Running Mobile Mark 2005, the Pegasus 650 turned in a battery score of one hour 54 minutes running the GeForce 6600 graphics, while switching to the Intel integrated graphics that time rose to two hours 48 minutes – that’s a pretty significant difference. Likewise, when running the DVD playback test under Mobile Mark, the GeForce graphics setup managed one hour 45 minutes, compared with two hours 39 minutes on the integrated solution – that’s the difference between watching a whole movie or not! Of course since the Pegasus 650 has an instant-on feature for DVD playback without booting into Windows, both those times can probably be improved upon. 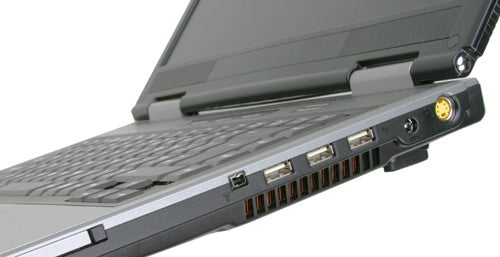 So, the switchable graphics solution definitely makes a difference to battery life, but even with the Intel graphics selected, the battery life is far from the best I’ve seen. Compare these scores to the Acer Ferrari 4000 notebook that I looked at a while back, and you’ll see that battery life could be better. To be fair to the Pegasus 650 it is a faster machine in both SYSmark and PCMark, so it’s probably drawing a bit more power than the Acer was.


The problem with the switchable graphics, is that even with the GeForce 6600 selected, the Pegasus 650 isn’t exactly a mobile gaming powerhouse. The 3DMark03 score of 5505 and 3DMark05 score of 1303, both at 1,024 x 768 show that you’re not going to be pushing high frame rates in the latest games. And if you want to play at the screen’s native resolution, things will slow down even more. The Acer Ferrari did better in 3DMark03, but it was running an ATI Mobility Radeon X700 chipset. But if you’d rather have the ATI solution that’s no problem, not only does Rock offer that option, but it will save you £50 as well.

There’s a decent amount of connection options around the chassis with the right side sporting three USB 2.0 ports, a four-pin FireWire port, a TV-Out port and the power socket. At the front is the switch for the graphics chips, a line-out/S/PDIFF socket, a line-in socket and a microphone socket. Here you’ll also find a memory card reader that will accept SD/MMC and MemoryStick formats.


The left side is dominated by the DVD-Writer that will burn DVD+R/RW, DVD-R/RW and CD-R/RW media. Next to the drive is a modem socket and an Ethernet port for the integrated Gigabit network interface. The rear is barren apart from the D-SUB port allowing you to hook the Pegasus 650 up to an external monitor.

Rock also bundles a Vodafone Mobile Connect 3G data card with the Pegasus 650. This is a great bit of kit and something that I simply can’t live without – if you ever need to work on the move, you need a 3G data card. The card comes with £10 of credit, but do be careful because the pre-pay data charges can get steep. At £4 per megabyte charges can soon mount up, although if you don’t do too much downloading and limit email attachments you should be ok. If you are going to be a regular mobile data user, you might try to convince Vodafone to put you on a contract where £23.50 per month will get you 75MB of data per month. It’s worth mentioning though that the Vodafone card is actually an Intel promotion, so you’ll find that many notebook manufacturers will be bundling them with Intel Centrino based notebooks.


When it comes to price, the Pegasus 650 is pitched pretty much where I’d expect to find it. At £1,350 including VAT you’re getting a decent amount of hardware for your money. However, the aforementioned Acer Ferrari 4000 can be had for £1,199 including VAT these days, if you’re happy with an AMD platform. But if peace of mind is important to you, the three year collect and return warranty offered by Rock will be a very welcome feature – something that the Acer can’t boast; a three year warranty is an extra cost. 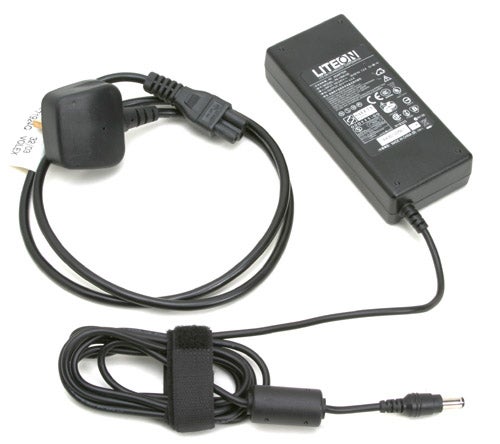