What is the Roccat Vulcan 100 Aimo?

German manufacturer Roccat rarely fails to impress when it comes to expertly crafted PC gaming peripherals. I still use a Roccat mouse for all of my head-blasting shenanigans, and the new Vulcan 100 Aimo will be replacing my usual SteelSeries keyboard too.

This metal board boasts a unique skeletal design, premium mechanical construction and RGB backlighting with 16.8 million colours on offer. It’s expensive, sure, but you get what you pay for. And in the case of the Vulcan 100, you get some serious quality and an excellent gaming experience.

Note that the Vulcan 100 Aimo can also be picked up in two other flavours. The Vulcan 80 Aimo is a cut-back version without the individual key lighting, while the Vulcan 120 Aimo is essentially the Vulcan 100 with a plastic wrist rest added on (for a tenner extra).

One of the first things you’ll notice about the Vulcan 100 Aimo is that half of the keyboard appears to be missing. Each key protrudes straight out from a metal board, which you’d expect to be hidden away using some kind of protective cover. However, this design doesn’t just look funky as hell, it’s also very smart. After all, you’ll never have the frustration of shaking dust, crumbs and other spilled debris from the Roccat’s innards. I’ve never tested a board that’s been easier to clean. 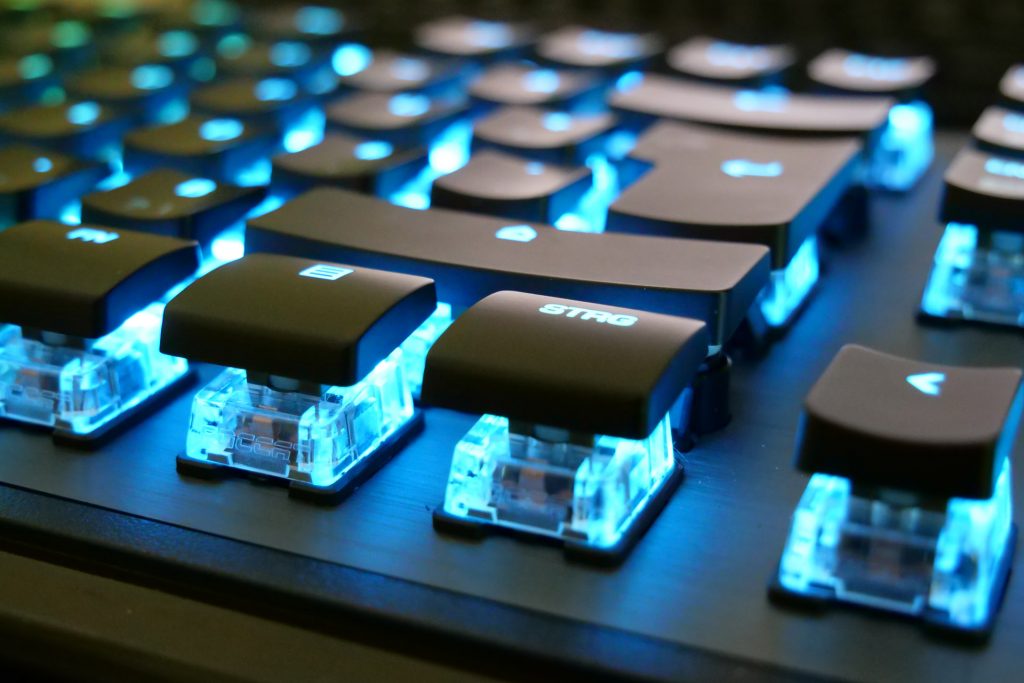 With its metal chassis, the Vulcan looks as though it should weigh a hefty amount. Thankfully it’s a shade under one kilo, so carrying it around is no hardship. It’s also tough as anything, putting up with all kinds of punishment without any apparent problems. Even the fold-out stands at the back feel rugged enough to survive a fair few knocks.

Key layout is just as smart as you’d expect from an expert such as Roccat. A numerical pad and the arrow keys are well separated from the rest of the board, so each section is easy to find by touch alone. The individual keys are well sized and spaced too, for effortless touch typing.

You don’t get any dedicated Macro keys here, although some handy volume controls are housed over in the top right corner. This includes a proper twisty dial for quickly cranking the volume up or down. It’s easy to find by touch alone, and very satisfying to use. 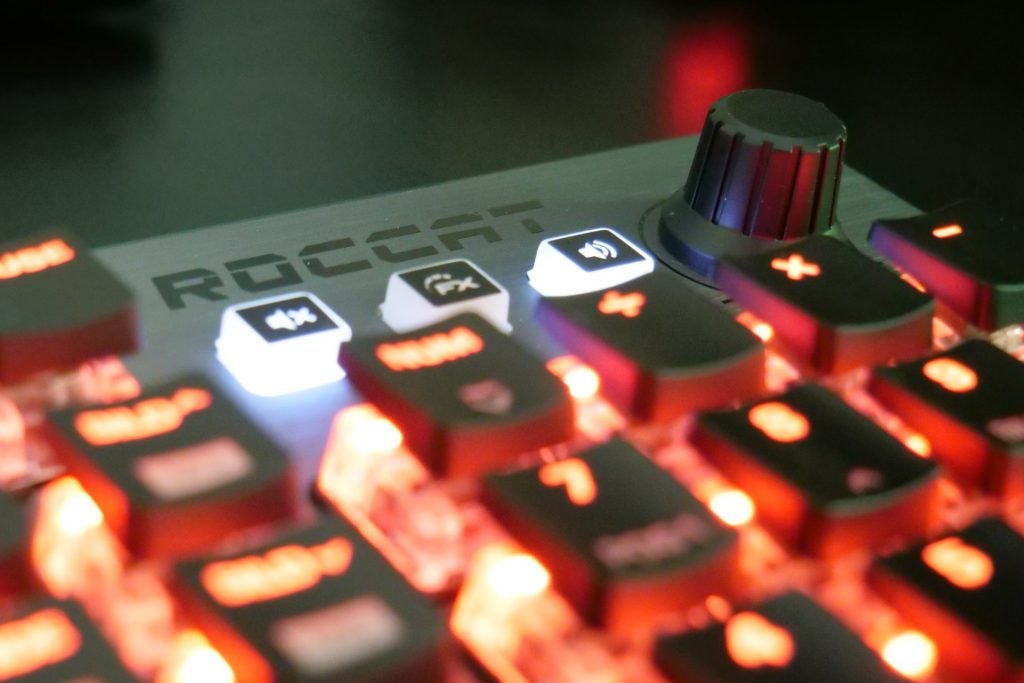 My Vulcan 100 review model turned out to be the original German version, hence some of the keys were oddly positioned – the QWERTZ layout had me scratching my head when I first pulled the thing from its box. Thankfully you can prise off each key cap rather easily and rehouse them elsewhere, to match your favoured layout. And when they snap back into position, those caps hold firm.

You can also remap any key using the Roccat Swarm software, which is free to download.

Bluetooth support is non-existent, so you’re stuck with a tethered connection to your computer. Likewise there are no additional ports for connecting peripherals, like some gaming keyboards offer.

The mechanical Roccat Titan switches boast a 1.8mm actuation point and proved very satisfying for everyday use as well as intensive gaming. 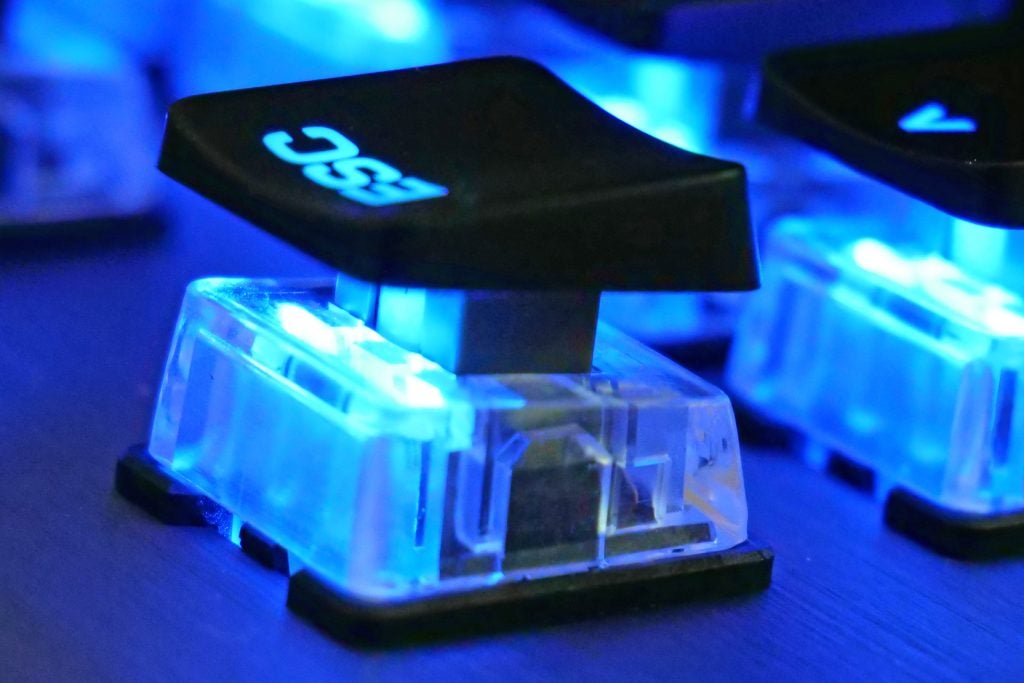 Each key moves fluidly when struck, offering comfortable travel. The result is a smooth and satisfying touch-typing experience. After being hit, the keys also bounce back into their original positions immediately, which is essential for any intensive gaming sessions.

Of course, like most mechanical keyboards, the Vulcan 100 Aimo is far from quiet. I’ve tested noisier boards, but anyone trying to sleep in the same room – or even the adjoining room – while you’re getting your game on is likely to be rather upset.

Each key on the Vulcan 100 is separately lit, offering an impressive 16.8 million colours to choose between. 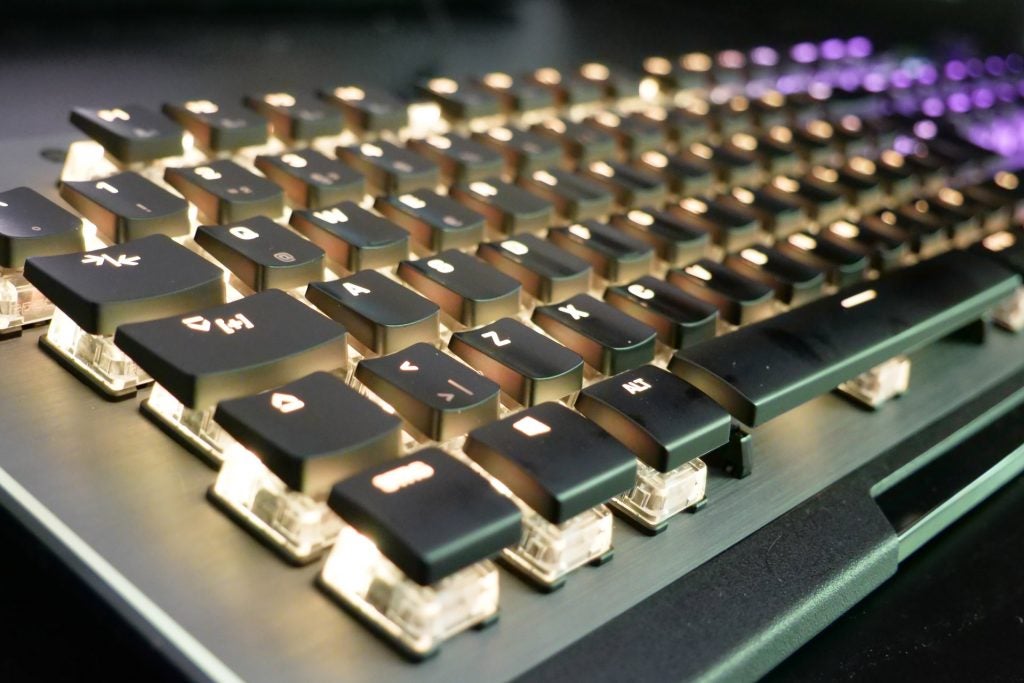 The Aimo in the keyboard’s title refers to Roccat’s intelligent lighting system. You can override this and set up your own psychedelic light show, but I rather liked the way the Vulcan’s keys glowed and ebbed to match my keystrokes. Leave it alone and the board will continue to pulse, cycling through all manner of vibrant hues. It’s quite a spectacle in a dimly lit room.

Of course, if you’d rather manually configure the colour of every key, that too is possible. You can set up a number of profiles and map different bindings and effects to each one, which is particularly handy if you regularly jump between a handful of favourite games. 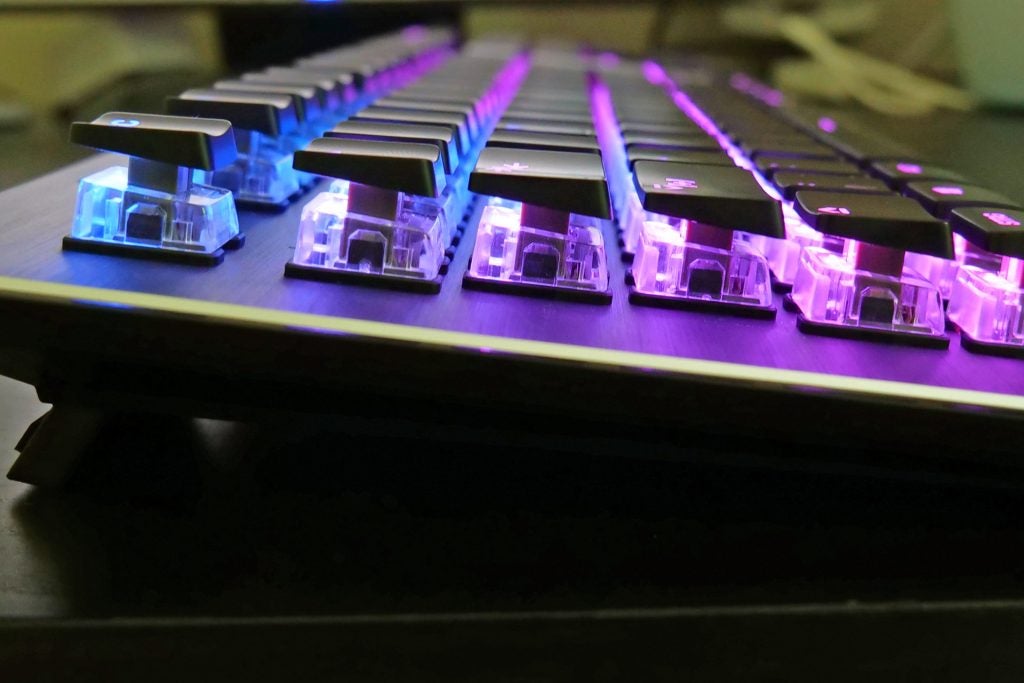 Why buy the Roccat Vulcan 100 Aimo?

If you’re serious about gaming and money is plentiful, then we’d recommend the Vulcan 100 Aimo in a heartbeat. You may wish to consider the Vulcan 120 of course, which also comes with that wrist support.

Those keys are tall enough to necessitate some kind of support, although any kind of wrist pad you happen to have lying around should work fine.

A fantastic keyboard with some very clever features