What is the Roccat Suora FX?

When it comes to in-your-face gaming keyboards, German manufacturer Roccat pretty much has the market cornered. The Suora FX is its latest launch, a colourful board that sports a less skeletal finish than the Vulcan 100 Aimo, but with pretty much all of the same advantages.

As well as durable design, the Suora boasts impeccable performance for gamers. Advanced anti-ghosting and a 1000Hz polling rate ensure that your frantic button bashing is registered every time, while the individual key lighting is fully customisable via Roccat’s software. 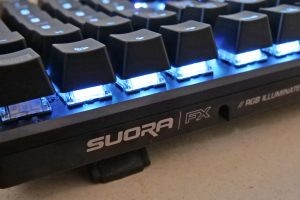 Design-wise, the Suora is a halfway-house between standard gaming keyboards and the funky Vulcan 100 Aimo (also a Roccat creation).

The keys once again stick straight out of a flat aluminium board, with no kind of housing to hide away the switches. However, this time the caps do come down around the edges of each key, so there’s less overall exposure.

All the same, you can easily snap the key caps off if needed. In fact, they pop off all too happily, so you’ll need to be careful when transporting the keyboard. Blissfully, there are no fiddly gaps that might otherwise collect dust, debris and doughnut particles. 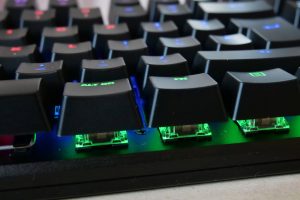 That metallic build is also reassuringly tough, as I can testify. I simulated a little mid-game rage by pounding the unit with my fists, to no ill-effect.

Although there are no dedicated media keys for skipping or pausing tracks, the Suora’s F9 through F12 keys double up with this functionality. Plus, you do at least have some standalone volume controls, housed in the top-right corner. Not as funky as the Vulcan 100 Aimo’s dial controls, but good to have all the same. 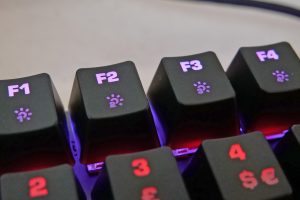 One rather minor grumble is the design of the Caps Lock key. For some reason, this key is marked with only a downward-facing arrow, which was more than a little baffling at first glance. Of course, it’s hardly something to lose sleep over, and you’re unlikely to notice when you’re gaming or touch-typing.

There are no bonus ports for connecting other peripherals anywhere on the Suora. You don’t get any kind of palm-rest either, so you’ll want to supply your own if your wrists are feeling the strain from far too many late-night sniping sessions. 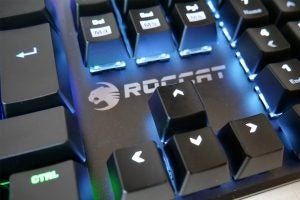 The mechanical key switches make for a deeply satisfying typing and gaming experience.

Those colourful keys spring back into place the instant you lift your finger, and without making too much racket either. Don’t get me wrong, this certainly isn’t a quiet board – you wouldn’t want to use it in the same room as someone who’s trying to get to sleep. But the Suora isn’t any noisier than other mechanical keyboards that I’ve tested recently.

Regardless, the firm action feels good whether you’re capping fools in an online match, or smashing out an almighty essay through the wee hours. Each key is well sized and spaced, so touch-typing is a breeze.

After just a little time spent with the Suona, my fingers were flying across the board and I rarely had to glance down to see what I was doing. A shame, really, given that funky design work. 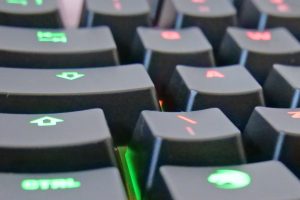 Download Roccat’s Swarm software and you’ll have full control over the Suora’s lighting and general configuration. From this app you can set up five separate colour profiles, assigning a hue to each individual key in turn. Every key supports 16.8 million colours, so you should be able to find a particular shade that tickles your fancy.

You can switch between these profiles quickly and easily, or assign them to specific applications – although there’s no way I could find of pairing them with individual Steam or Origin games. The F1 through F4 keys also allow quick cycling through the lighting presets, so you don’t even need to bring up the Swarm app to change on the fly. 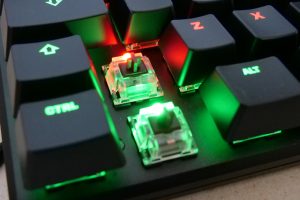 You can also change the function of each key if needed, with the ability to set up macros as handy gaming shortcuts. For each key you can assign a primary function as well as a secondary function, which becomes active when the Suoma is in ‘Game Mode’. This is toggled on or off with a quick tap of the top-rightmost button. It’s a simple, straightforward setup, so it definitely gets a big thumbs up.

Why buy the Roccat Suora FX?

Like the Vulcan 100 Aimo before it, the Suora FX is a well-designed board that will suit all kinds of gamers. Performance is dependable, the overall design is tough as well as slick and, as ever, you can customise the lighting and general functionality to your precise liking. 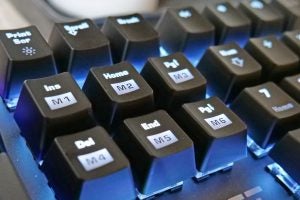 The Suora FX is a feature-packed, fully customisable keyboard that offers strong performance for gaming fans.