They’re softer than mechanical keys, and require less movement to register a press. They’re quieter for the most part, too, although the Skeltr’s Return and spacebar make more noise. You don’t get the bump that’s prevalent on certain mechanical switches, or the firm feeling when the keys bottom out.

The keys are softer and less insistent than mechanical keys, but this isn’t necessarily a bad thing – they’re comfortable and top-notch for typing. They’re just as quick to respond as mechanical keys, and their comfort is matched with solid consistency.

The Skeltr’s soft, responsive keys are absolutely fine when it comes to casual and mainstream games. I also had no problems with keys sticking or not registering. Despite that, for this money, I think that hardcore gamers will feel aggrieved at the lack of mechanical hardware. 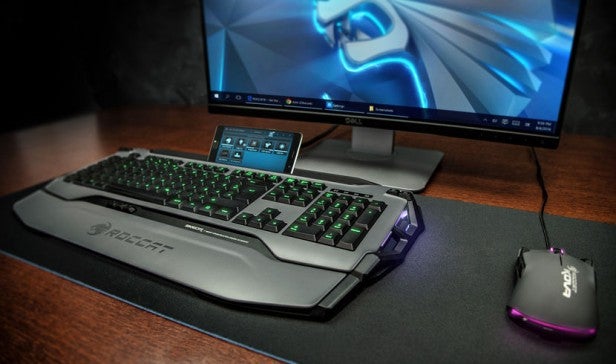 Mechanical switches are certainly the preferred option for competitive players, and people used to those heavy, fast-twitch keys could find the Skeltr a little too spongy. And while the Roccat is great for typing, mechanical switches aren’t exactly bad in this regard, either.

The Roccat’s macro keys use the same rubber dome construction, but the shoulder and thumb buttons don’t. They’re far stiffer, with barely any travel and quick response – more like a gaming mouse than a keyboard.

The Roccat’s soft-touch approach isn’t far removed from its rivals. The SteelSeries Apex M800 has a similar lack of a firm base and a defined typing action – it was comfortable, but not necessarily great for twitchy gaming. The Razer BlackWidow X Chroma was a little firmer and louder, with more resistance, but still not as relentless as a Cherry MX mechanical keyboard.

Should I Buy the Roccat Skeltr?

This is a keyboard that places greater emphasis on its features than the typing experience, and that means it’s going to be divisive.

The smartphone features are impressive. The ability to answer calls, reply to messages, switch keyboard profiles and monitor your PC’s hardware is a boon, and Roccat’s app links up easily and works well in most scenarios. It’s a boon in gaming, and it works well with multimedia applications.

Elsewhere, it’s a mixed bag. I like the macro keys, the design and the build quality, but serious gamers will notice the lesser key rollover and the dearth of USB ports.

The rubber dome construction is comfortable and quick, which means typing is top-notch and gaming is reasonable – but it just doesn’t offer the snap and weight of a mechanical device. This is likely to put off many gamers. 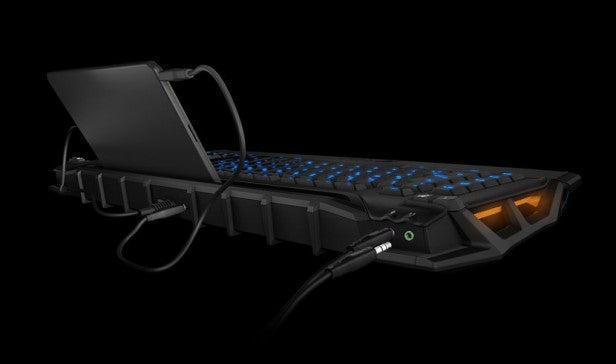 The price, too, makes me wince. The phone features are smart, the build is good and the keys are solid, but for that money I expect all of that – and mechanical keys, too. If you’re likely to make full use of the smartphone features then it’s a worthwhile investment. If not, rival mechanical devices are cheaper and better for typing and gaming.

The Skeltr makes big claims about smartphone integration, and it largely delivers. The keyboard itself is solid and good for typing, too, although the price is too high, and the lack of proper mechanical hardware means it will lose ground with hardcore gamers.