What is the Roccat Kone AIMO?

The Kone is the latest mouse in Roccat’s ‘AIMO’ lineup. It features brightly designed RGB lighting and offers top-class performance across games of all genres.

It’s a little different to some of its rivals, since it’s noticeably bigger and heavier than most gaming mice I’ve tested, and comes equipped with additional programmable buttons. It won’t appeal to everyone, but that almost adds to the Kone AIMO’s charm. If you’re after a mouse that’s just that little bit different, this could be exactly what you’ve been looking for. 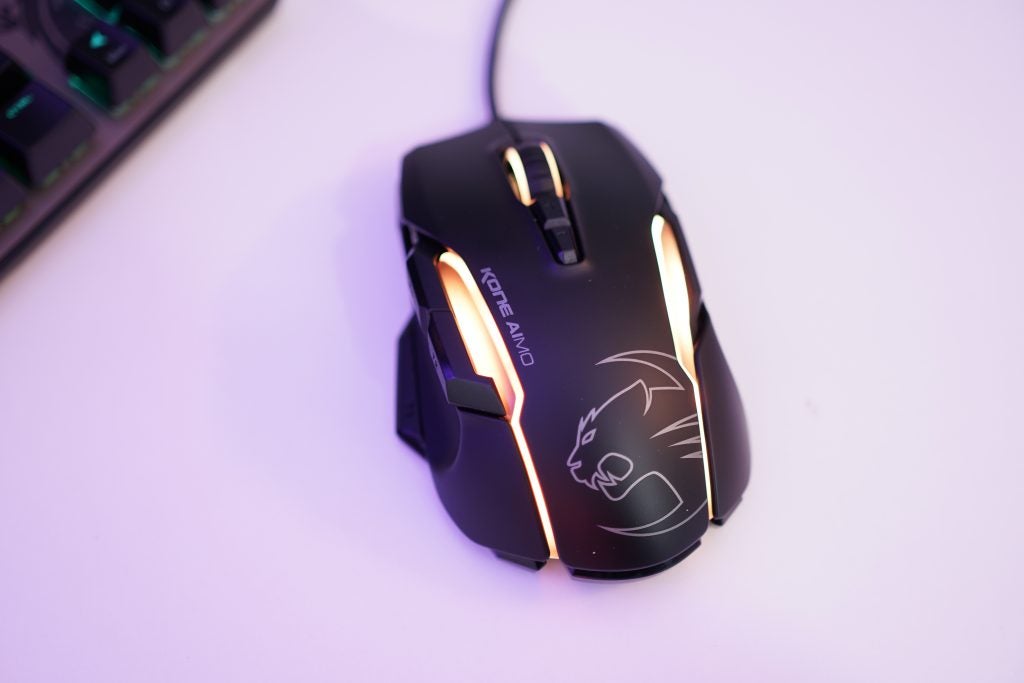 The Kone AIMO is perhaps the most sculpted mouse I’ve come across to date, with the larger body cut away at each side, and raised to match the natural shape of the human hand. It isn’t suitable for lefties, but it matches my hand and grip-style perfectly, and as such it’s outstandingly comfortable in operation.

The design language is unapologetically loud throughout, with two large stems on the front face of the Kone that shine veins of RGB lighting into the room. The Roccat logo also sits proudly on the front face, with the text ‘Kone AIMO’ neatly etched just above.

The mouse features a total of seven buttons, although the scroll wheel houses three click switches to bring the action count to ten. There are two DPI buttons on top, and the backwards and forwards buttons on the side are far more prominent than you’d see on your standard gaming mouse. There’s a further button below the thumb grip on the left-hand side, which, similarly to Razer’s Hypershift system, can be used to trigger secondary actions for each of the other buttons on the Kone. It’s called ‘Easy-Shift’. 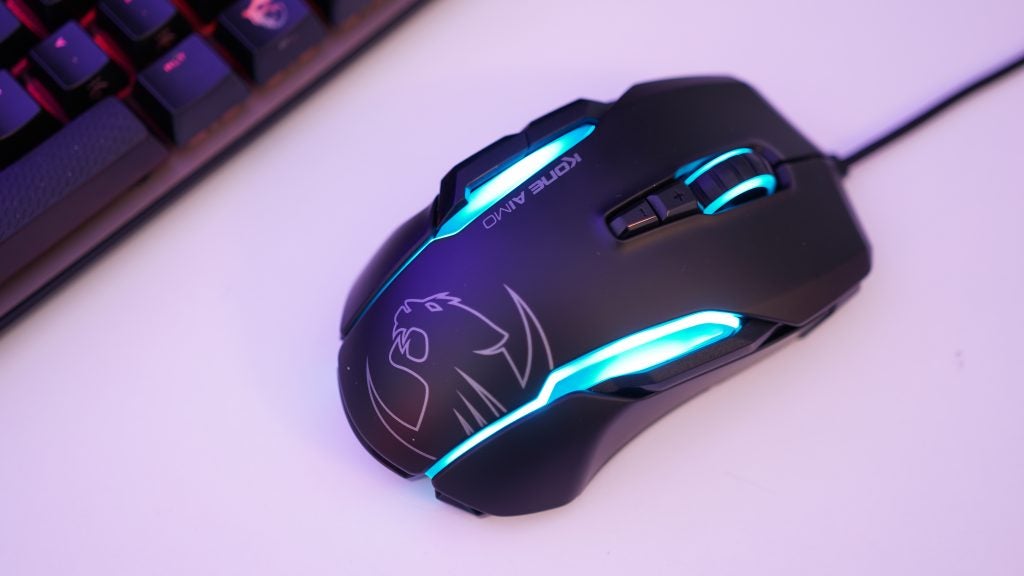 The underside of the mouse sports five large teflon pads for smooth gliding and, of course, the Owl Eye optical sensor. It’s a shame that there aren’t any customisable weights on-board, as the 130g weight of the Kone AIMO is a little on the heavy side for my tastes. It’s unexpected, too, since the mouse’s plastic build doesn’t feel as solid as the Corsair M65 Pro, for example, so I’d have expected it to be lighter as a result.

There are also a couple of other quibbles. The connection cable is braided, but sadly non-replaceable, and there’s also no trace of removable switches of the type found on rivals such as the ROG Gladius II.
Roccat Kone AIMO – Performance

When it comes to performance, I’ve been very happy with the Kone AIMO in both work and gaming scenarios. Tracking is responsive and precise across the entire DPI range. The Owl Eye optical sensor maxes out at 12,000, although you’re unlikely to come close to needing this. I opted for 1,750 as the default sensitivity, and set a lower value of 800 whenever the thumb button was pressed.

Regardless of whether it was the tense shooter action of PlayerUnknown’s Battlegrounds, or the laid back adventures of Sea Of Thieves, the AIMO was always super-comfortable, and felt natural to use. The level of accuracy is certainly up there with the best, and it’s been a pleasure to use. I will say that the SteelSeries Rival 310 feels slightly smoother and livelier, but I’m confident that the Kone AIMO will serve you well regardless of your gaming needs. 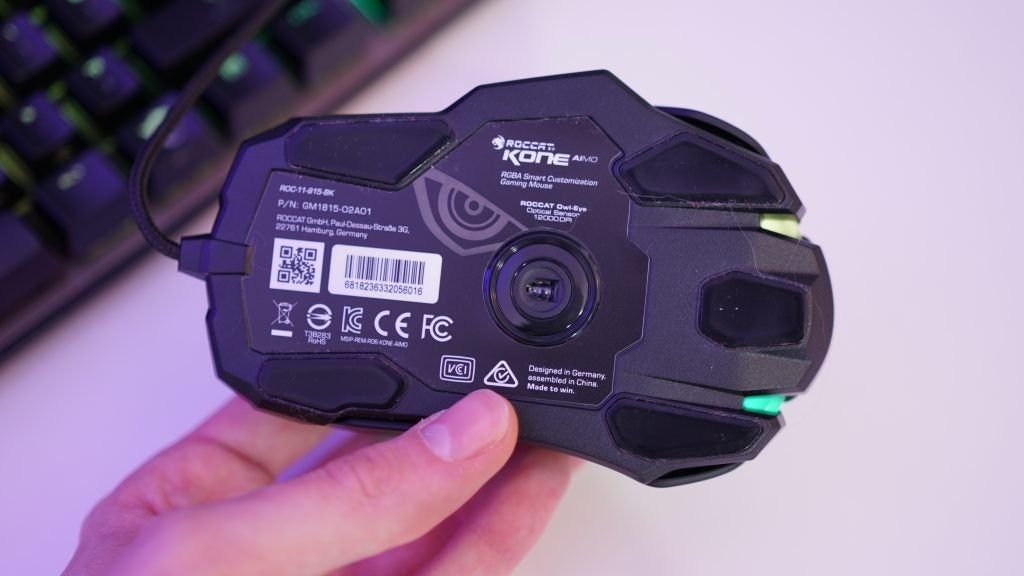 The lighting represents some of the best RGB implementation I’ve seen on a gaming mouse, with a loud and proud approach that clearly sets the Kone apart from understated rivals. Colours are bright and vivid, with multiple zones that can all be customised in the Roccat Swarm software. There are plenty of effects to choose from, and the mouse can be configured to react according to your current activities – although these effects are very subtle.

Swarm can also be used to adjust the performance settings of the mouse, including button actions and DPI selection. There are on-board profiles, too, so you can take the changes with you without needing to re-install the software. I’d maybe prefer a few extra features and a more friendly user interface, but you’ll get the job done without issue at all. 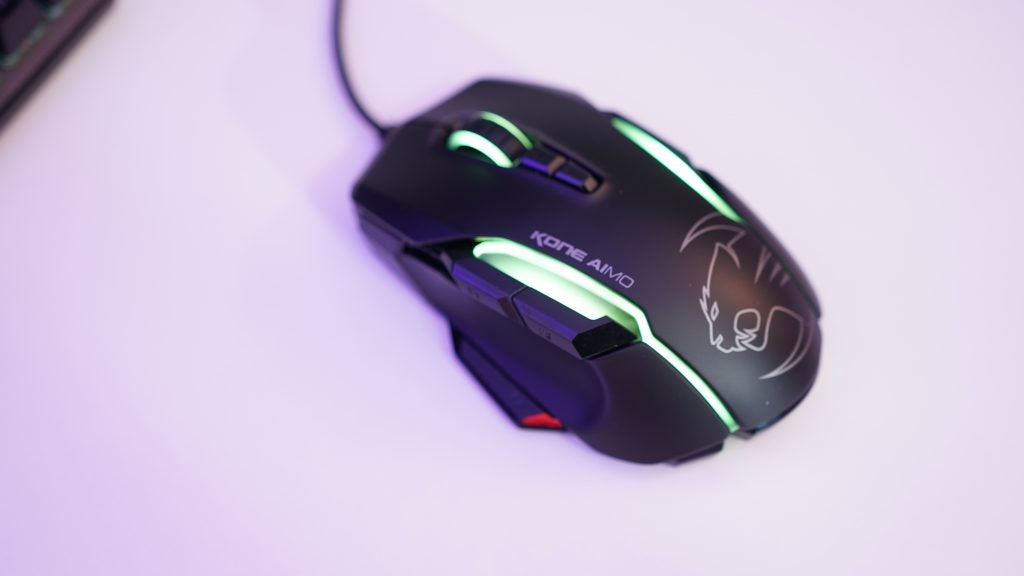 Why buy the Roccat Kone AIMO?

The Roccat Kone AIMO is an excellent gaming mouse. It’s super-ergonomic, tracks well, and has all the features you’d expect of a high-end gaming mouse. At £69.99, it’s fairly priced too – although there’s certainly plenty of competition.

My main concern with the Kone is that it’s on the heavier, chunkier side, and as such it isn’t a device I’d personally choose as my daily driver. But that’s okay, because there are plenty of people out there who want exactly that, and if you’re in that camp, the Kone AIMO comes highly recommended.

An ergonomic gaming mouse that’s ideal for those with larger hands.