What is the Roccat Kave XTD 5.1 Analogue?

Roccat may not be as big a name as Turtle Beach, Astro or Razer when it comes to PC gaming audio, but the German company has quietly recently been putting out some great products at keen prices. I liked the Roccat Kave XTD headset last year, while its Tyon gaming mouse fared even better.

The Roccat Kave XTD 5.1 Analogue is as pure a PC gaming headset I’ve seen recently. It doesn’t try and do anything fancy like go wireless, offer noise cancellation or be compatible with games consoles or mobile devices. No, this is just a well-made headset that offers surround sound features at a budget-friendly sub-£100 price point.

What the Roccat Kave XTD 5.1 Analogue does though, it does exceptionally well. The headset itself is really well made, from the subtle black styling to the comfortable cushioning and high-quality tangle-proof cabling. The surround sound features are excellent, and general audio performance is better than you’d expect from a headset at this price. The detachable microphone also offers clear voice communication for online gaming, VOIP or even livestream commentating. Overall, it’s a great gaming headset. 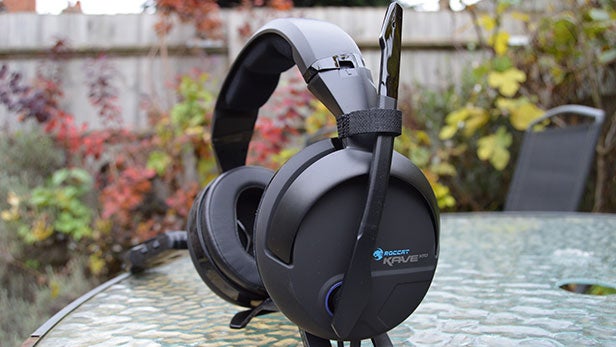 For a headset that costs only £90 (or less if you shop around), the Roccat Kave XTD 5.1 Analogue is sleekly designed and robustly crafted. The black styling is understated, the padding along the ear cups is soft and luxurious, and the weight of 336g is solid without feeling too hefty. The only stylistic flourishes are the small Roccat logos on the sides.

It’s not just the headset that’s well constructed – the cabling is equally strong when it comes to build quality. At over 2m, it’s long enough to stretch to a PC that might be tucked away, while it’s thick and strong enough to withstand being tugged on during an energetic gaming session. It’s also pretty much tangle-proof, so it doesn’t get caught up on itself after you’ve been using it for a few days.

As the name of the headset suggests, the wiring boasts a variety of analogue connectors, with four 3.5mm connectors providing 5.1 audio. If you’ve bought or built a PC in the last few years, chances are your motherboard will have the necessary ports, but check before you buy, or you may need to invest in a sound card. You also need one spare USB port in order to power the headset.

Roccat’s overall build quality is high, and exceeds what I’d usually expect from a headset at this price. The headband and earcups are made of plastic, but they feel sturdy enough to be dropped and thrown around, and they’re not creaky like a lot of budget headsets. The ear cups are padded and feature a leatherette finish. Again, this is a more luxurious finish than the fabric lining you usually get at this price. The headband padding is minimal and does have a less comfortable fabric finish, which sadly diminishes the feeling of luxury. 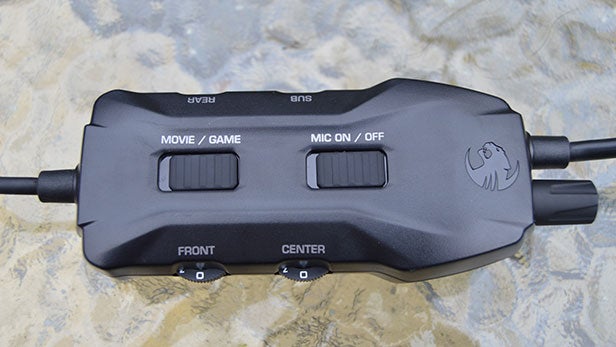 The cable also features a chunky remote control, with buttons to adjust pretty much every feature on the headset. You can turn the headset on and off, adjust the volume dial, turn the mic on and off, and switch the audio modes between game and movie. Each of the surround channels has its own separate volume control, meaning you can really customise the surround levels, as well as make quick adjustments in-game if you need to.

The headset features a microphone on the left earcup that can be folded up and tied in place with a cable tie, or completely detached if you prefer. It’s flexible, but not as manipulable as most other boom mics on gaming headsets. I do like that it lights up at the tip when muted though, so its status is immediately visible in your peripheral vision.

While Roccat has been laser-focused on doing a couple of things really well, the headset is let down by lacking the extras that we’ve come to expect from most gaming headsets. There’s no carry case, although you wouldn’t want to take the headset around due to the thickness of the cable and the number of connectors at the end. There’s no adaptor to make the headset compatible with consoles, although once again the number of connectors would make this setup cumbersome. And there’s no noise cancellation, although the thick padding on the ear cups do a good job of keeping external noise out.

Thankfully, most of these features are pretty superfluous to most people, and I think Roccat was smart to focus on audio quality and build quality Instead.

A simple desktop stand allows you to keep the headset stood upright on top of your computer or on a desk when it’s not being used. It isn’t fancy – it’s basically a bit of lightweight plastic – but it’s good to see Roccat thinking through how you might want to store the headset once you’ve finished gaming. 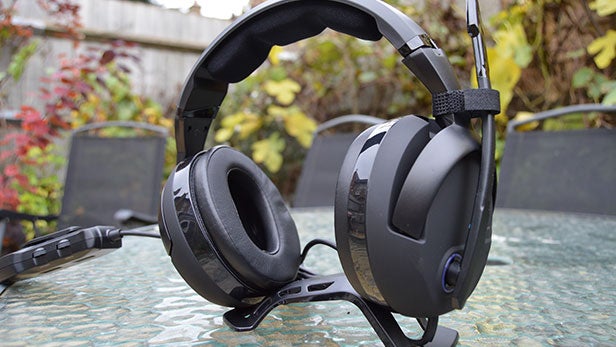 The Roccat Kave XTD 5.1 Analogue is a fantastic performer across the board, from audio reproduction, to surround sound, to microphone clarity. If you value sound quality but you’re on a budget, this is the best PC gaming headset at the sub-£100 price point since the Kingston HyperX Cloud II.

Roccat has designed each of the ear cups with a 40mm driver and a 30mm rumble unit, allowing the audio reproduction to be both detailed and powerful. This is a really punchy headset when it comes to reproducing audio in games. Details are clear and crisp, while powerful bass really adds to the overall presence of action games in particular. You have to go really loud before the audio starts to distort, which is another good sign of a high quality gaming headset.

The Roccat Kave XTD 5.1 Analogue is also one of the best surround sound performers I’ve encountered. I’m often left a little bit nonplussed by many headphone surround modes, but once I’d enabled the surround channel outputs in Windows settings, it was easy to hear the difference on the Roccat. I can only assume that Roccat’s decision to point the drivers at a very specific 12-degree angle (supposedly mimicking the way that our ears hear sounds around us) has a part to play. Whatever the design that Roccat has used, it’s very easy to hear which direction gunfire is coming from in first-person shooters, which has a definite gameplay advantage for those who play online. 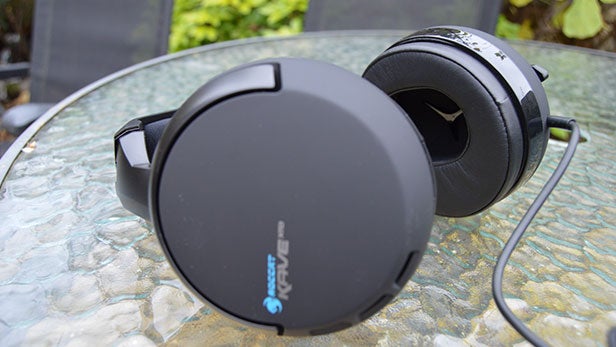 Another benefit of the Roccat’s analogue surround sound processing is that it’s a true hardware solution – there isn’t a USB sound card or a piece of software acting as an intermediary between your computer and the headset. This means that the headset is also good for movies as well as games, although there’s nothing quite like a true surround sound speaker setup. The headset also performed well musically, although this was the least impressive of its repertoire, which is also reflected in the dedicated “game” and “movie” modes on the in-line remote.

The headset doesn’t offer active noise cancellation, which is usually a feature of more expensive (and mobile-oriented) gaming headsets. It does, however, have Zero Noise Technology, which aims to reduce electromagnetic interference. I’ve never really had too much problem from interference on competing headsets, but the audio playback from the Roccat was certainly clean at distortion-free during our test. 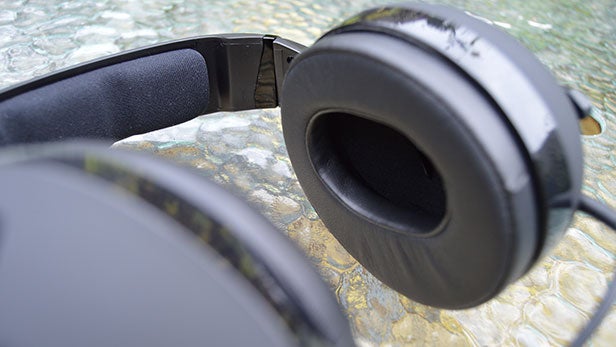 Should I buy the Roccat Kave XTD 5.1 Analogue?

It’s refreshing to see a gaming headset that’s so focussed on doing a few things really well, rather than a lot of things moderately well. The trend is for PC gaming headsets to offer compatibility with games consoles and mobile devices, or wireless compatibility, or noise cancellation, and these features are usually either done poorly, or bump up the price of the headset considerably.

The Roccat Kave XTD 5.1 Analogue, meanwhile, simply offers great build quality and excellent surround sound audio at a very competitive price. It feels built to last, is comfortable to wear for prolonged gaming sessions, and has one of the most noticeably beneficial surround sound offerings I’ve heard from any gaming headset at this price.

Verdict
It may not be versatile or feature-packed, but this high-value wired headset offers great build quality and excellent audio reproduction.