A surprisingly cheap robot vacuum cleaner that has proper navigation and mopping, but it lacks a bit of polish.

What is the Roborock E2?

There’s been something of a revolution in the world of robot vacuum cleaners of late, with emerging models offering excellent cleaning power at a decent price. The latest robot to join the masses is the Roborock E2 (also known as the Xiaowa E20). Available for £330, this model can not only vacuum but mop, too, much like its big brother: the Roborock S5. 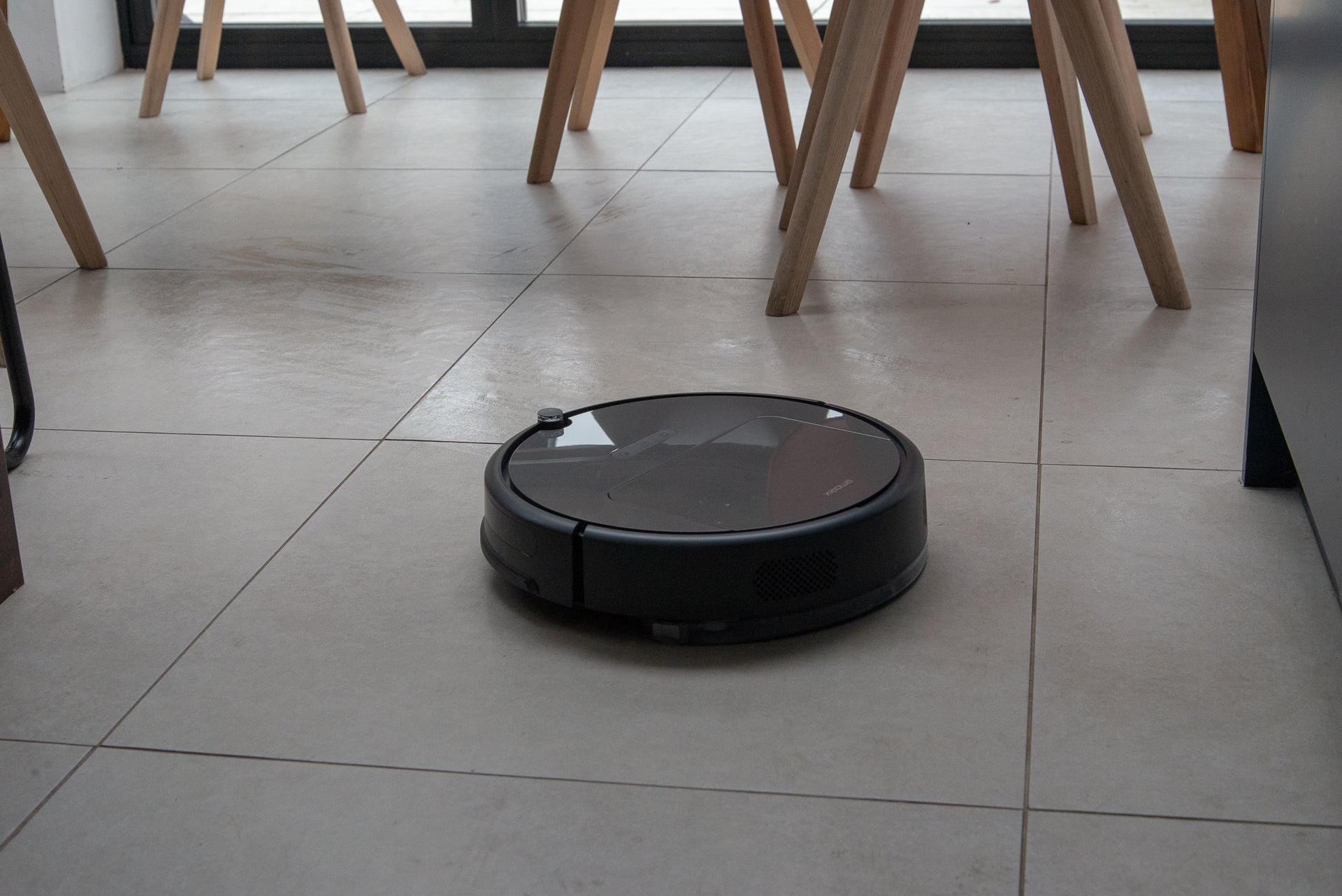 As with other Roborock vacuum cleaners I’ve seen, the E2 is a round and thin cleaner (351 x 353 x 91mm). As is common with this type of design, you’ll see the usual combination of trade-offs and advantages. While the robot is short enough to enable it to get under a lot of furniture, it will struggle to fit through tighter gaps such as chair legs.

Although the Roborock E2 is comparatively cheap, you wouldn’t know it from looking at it. In fact, put it next to any other robot vacuum cleaner and this model wouldn’t stick out as the budget option.

On top sit three buttons: start/pause clean, spot clean and return to dock. You flip up the plastic case to reveal the 640ml dustbin, which lifts out easily. I like that it’s made of clear plastic, allowing you to see at a glance how full the bin is. Emptying the bin is as easy as opening the rear and tipping out the dirt. A quick wash of the bin every couple of weeks or so wouldn’t go amiss. 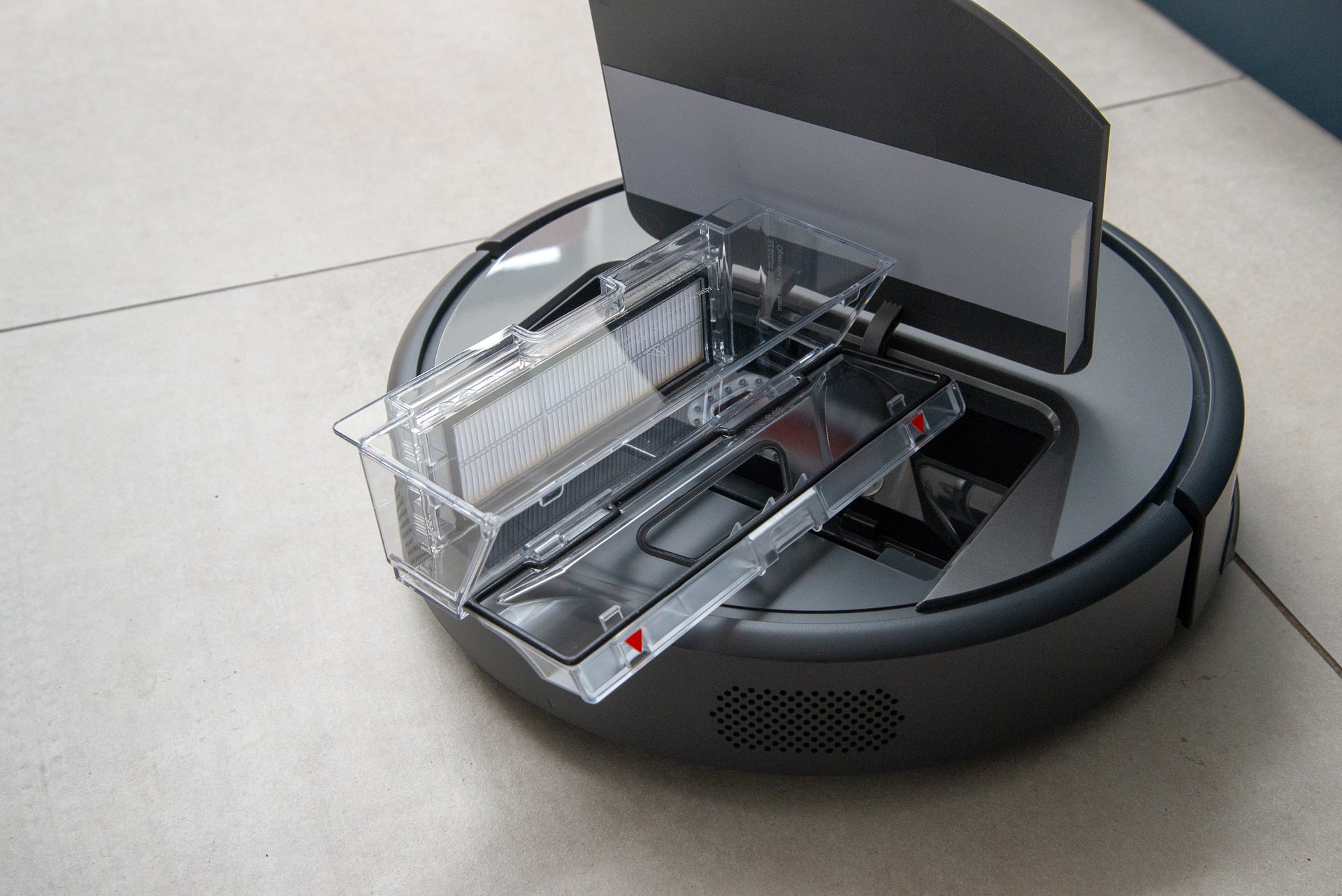 Underneath, there’s a single side brush used for pushing dirt into the main suction path. The main brush is a combination of rubber and bristles, designed to agitate dirt, so that it can be sucked up. You get a razor in the box to cut away hair that might become tangled in the brush. 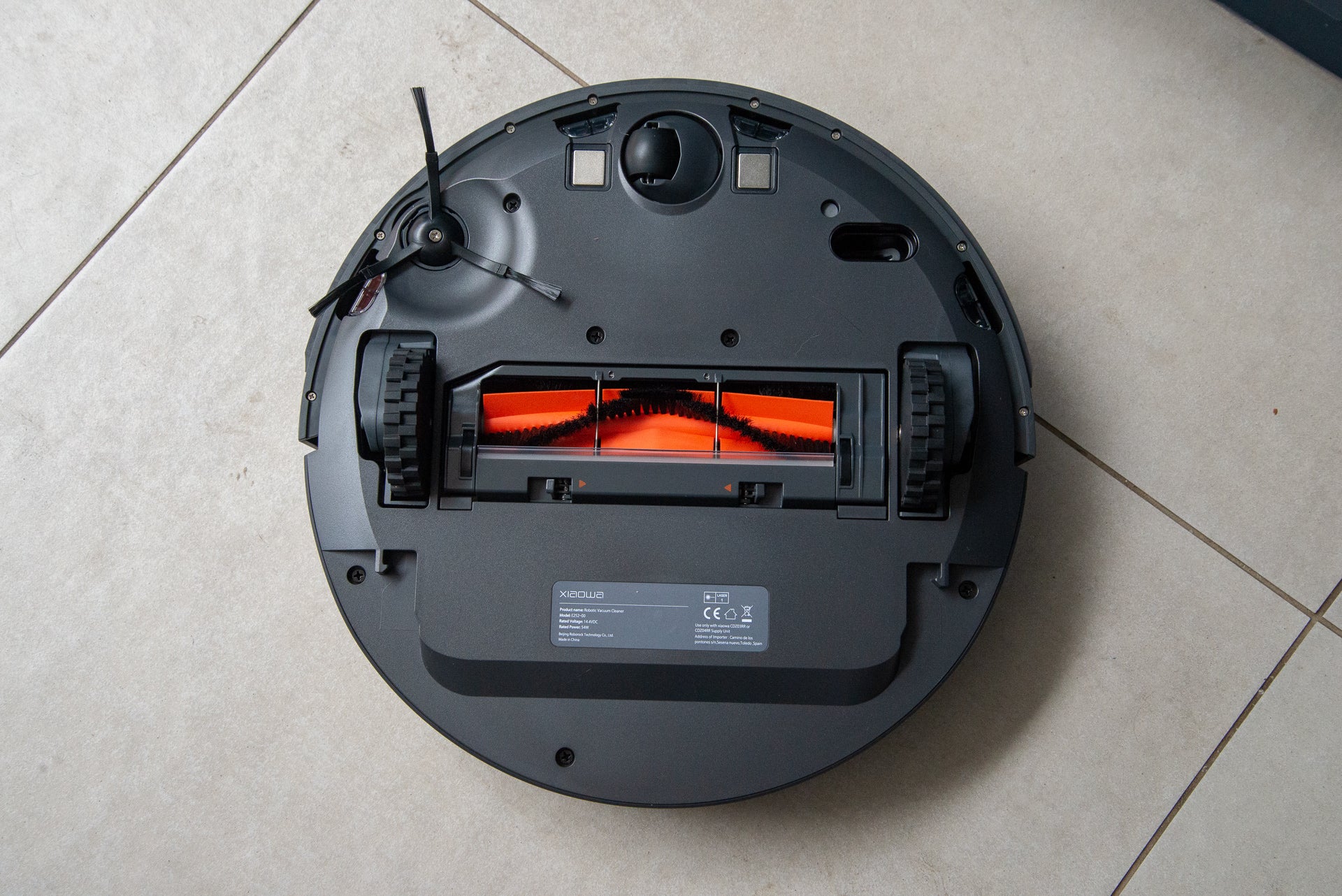 The filter in the bin needs to be replaced after every 150 hours of use; the side brush every 200 hours, and the main brush every 300 hours. The app will notify when it’s time to change them, with replacements available for around £10 that should last a year.

On the underside is also where you slide in the water tank with the removable microfibre cloth (two cloths are included in the box) for when you want to mop. The water tank clips easily into place.

Charging is via the provided dock, which annoyingly ships with a two-pin EU plug. As such, you’ll need an adapter or you’ll have to replace it. If you want to use the mopping function on wooden floors, Roborock recommends attaching the plastic base to the dock to prevent water leaking out and causing damage.

Although you can start a clean using the buttons located on top of the robot, yo’ll have access to greater options if you hook up the Roborock E2 to your Wi-Fi network and use the Xiaomi Mi Home app.

From the app, you’re afforded far more control over the robot’s cleaning modes, including a choice of four power modes: Silent, Standard, Strong and Max. Although, it’s almost too much choice; it would have made more sense to have just two modes, one for general cleaning and one for maximum power.

It’s worth diving into the settings and turning on the Carpet mode. When the robot detects that it’s on carpet, it ups power automatically. If your home has a combination of hard floors and carpet or rugs, this feature is well worth it.

There’s also a Mopping mode, which operates for the next clean only. It reduces suction to prevent the robot from sucking up too much damp dirt. You can also schedule the cleaner to start automatically, using any of the standard power modes. 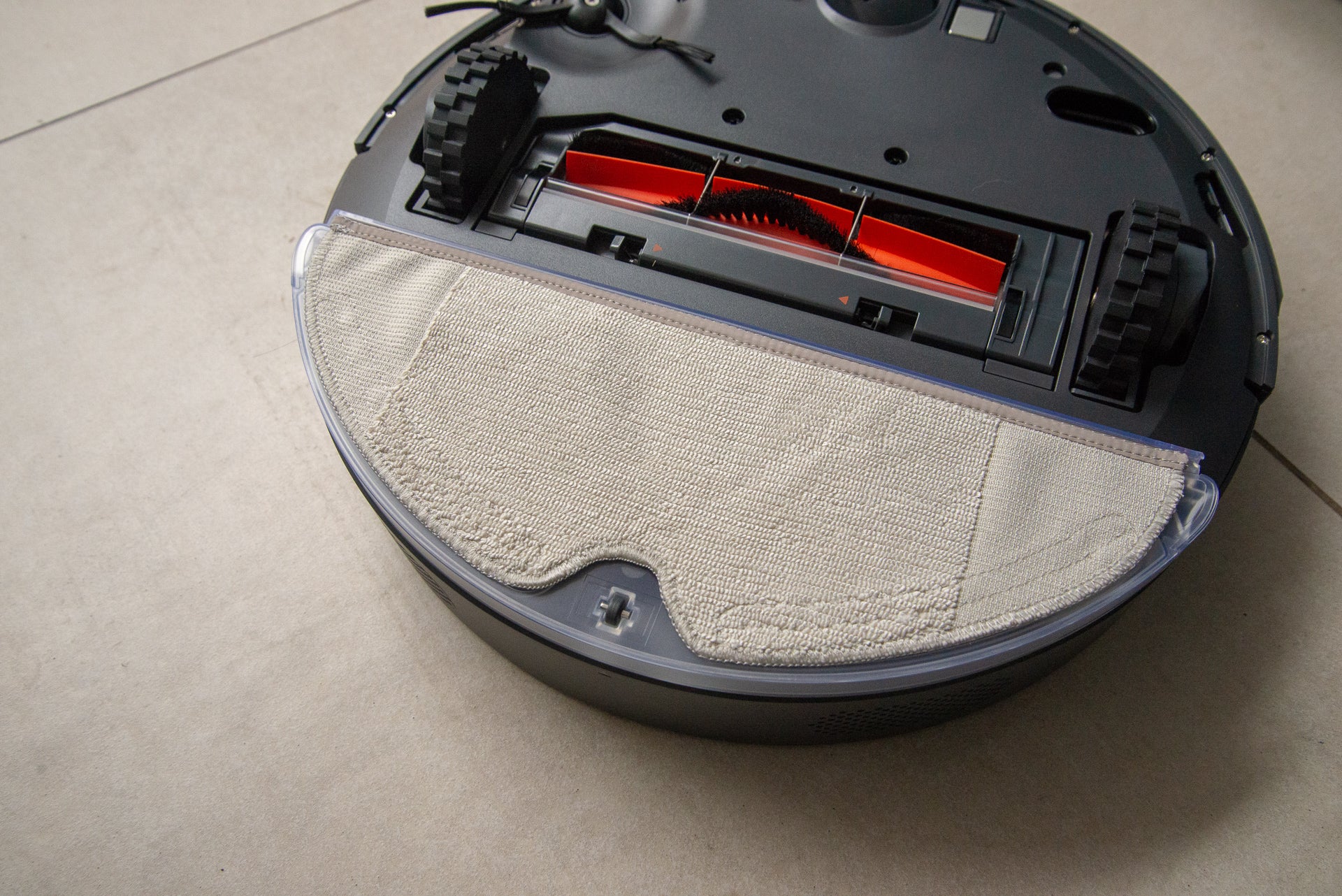 In Mopping mode, it’s recommended that you dampen the microfibre cloth first, then insert the small water tank into the robot. There’s no control over water use since the system is gravity fed, hence the need for the plastic base. Once the Roborock E2 has finished mopping, water will continue to drop out.

I’ve been told that it will detect magnetic tape, which you can stick down, but none is provided in the box. To stop the E2 from going where you don’t want it, you’ll either need to take up rugs or shut doors to prevent any accidents.

After each clean, the Roborock E2 generates a map to show you where it’s cleaned, but you can’t do anything with this information. 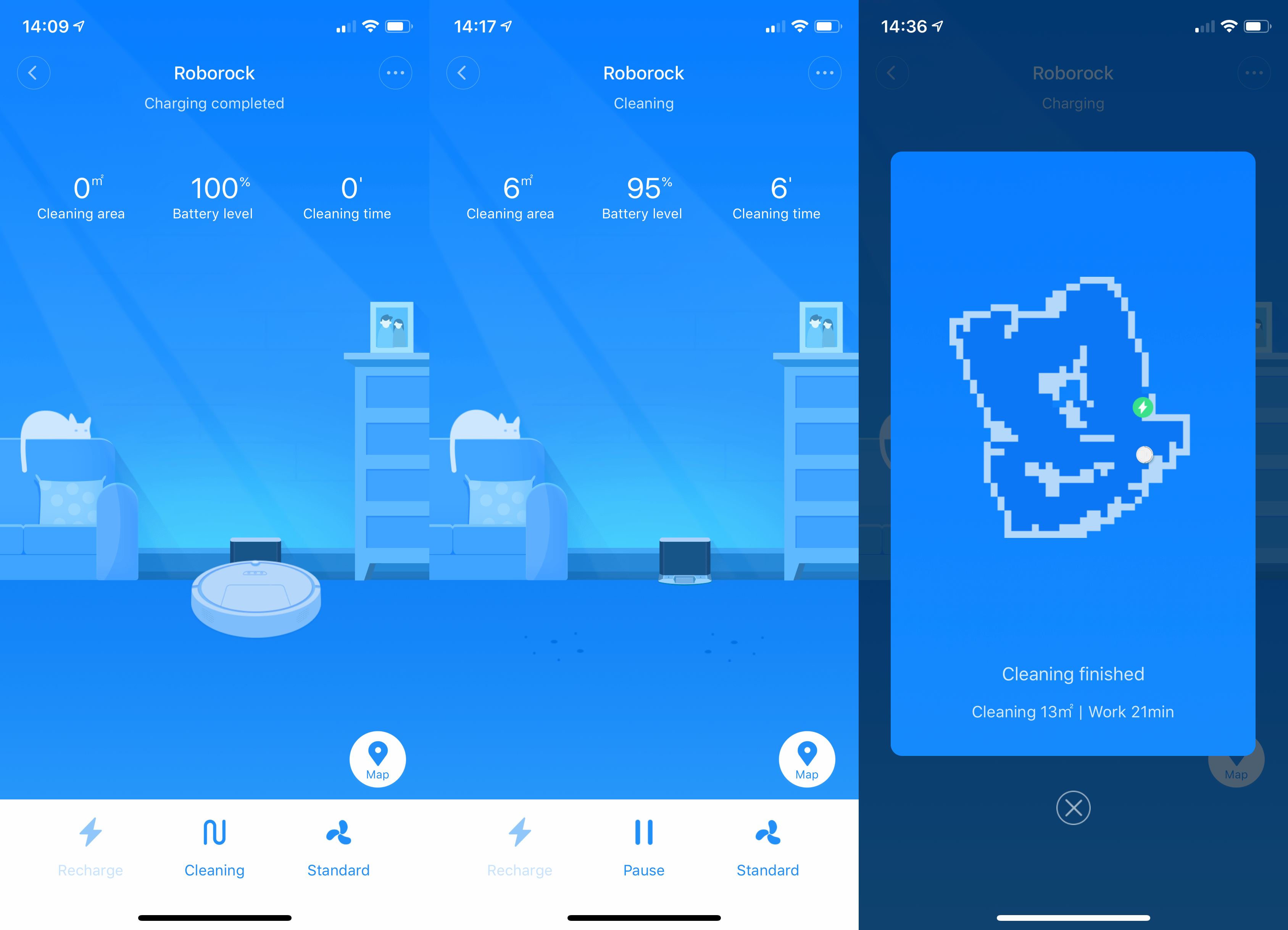 It’s powered by a 2600mAh battery, which is good for up to 1.5 hours of cleaning. After cleaning the kitchen and living room, the battery had depleted by only 16%. As such, you’ll definitely be able to clean larger areas or perform multiple cleans with this robot. You can also drive the vacuum manually using the app, although it’s more hassle than it’s worth.

There’s no Google Assistant support. Amazon Alexa is supported by Roborock E2, but logging into my account, Alexa couldn’t find any robot vacuum cleaners. That’s a shame, since the Roborock S5 is supported.

The Roborock E2 isn’t particularly loud. Running it in Standard mode and standing above the vacuum, I measured noise at 67.5dB; upping the power to Max, I measured it at 69.5dB. Dropping down to Silent mode didn’t make much difference: there’s less suction noise, but the mechanical noise of the vacuum running over the floor meant that it still measured 64.5dB.

Roborock E2 – How well does it mop?

Mopping is controlled by the gravity-fed water system, with the microfibre cloth picking up dirt. It does an okay job, picking up some dirt that the main vacuum can’t cope with.

My light kitchen floor can get quite dirty with three cats trampling dirt into the room. Surface-level dirt was picked up quite well, but deeper stains weren’t eliminated. 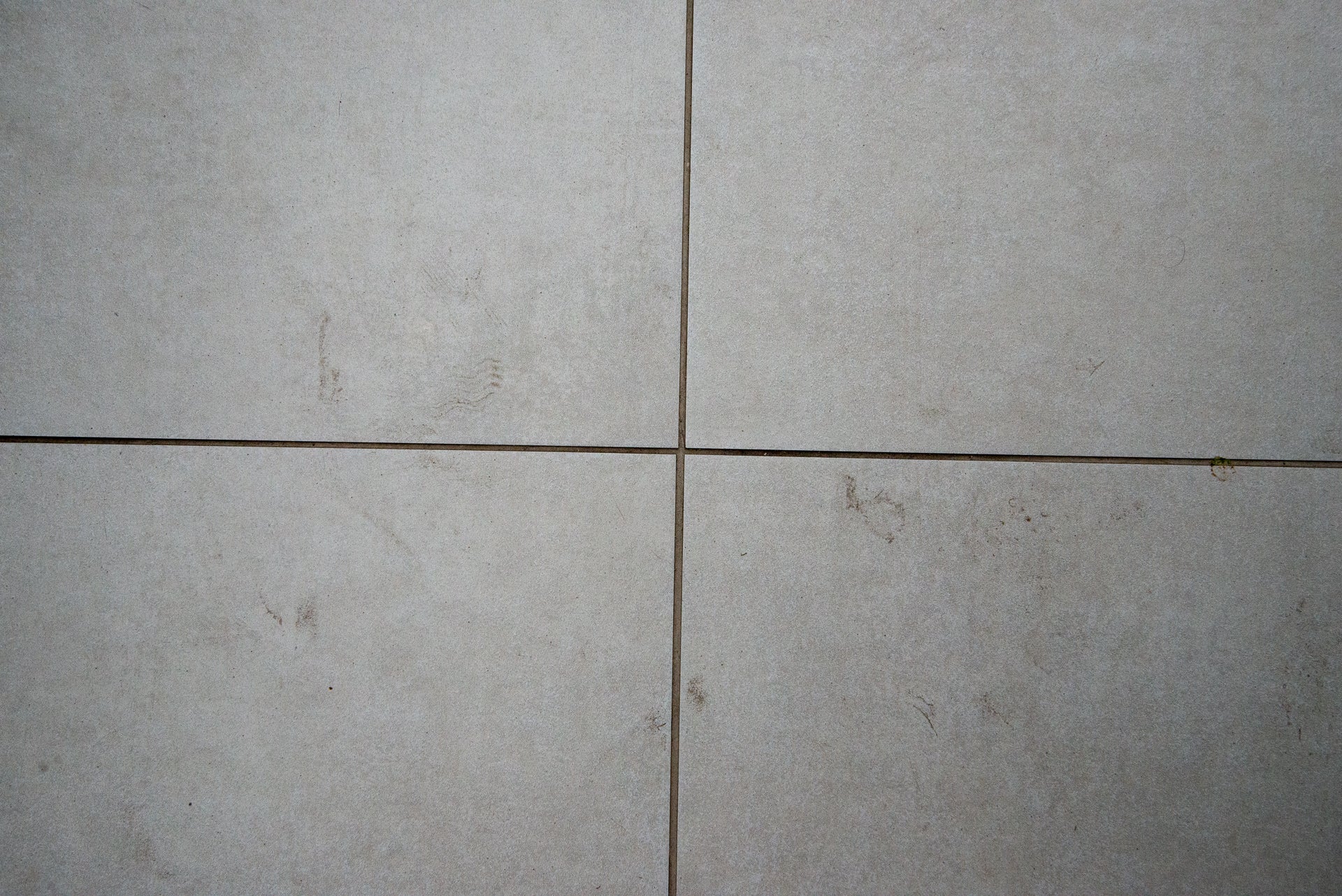 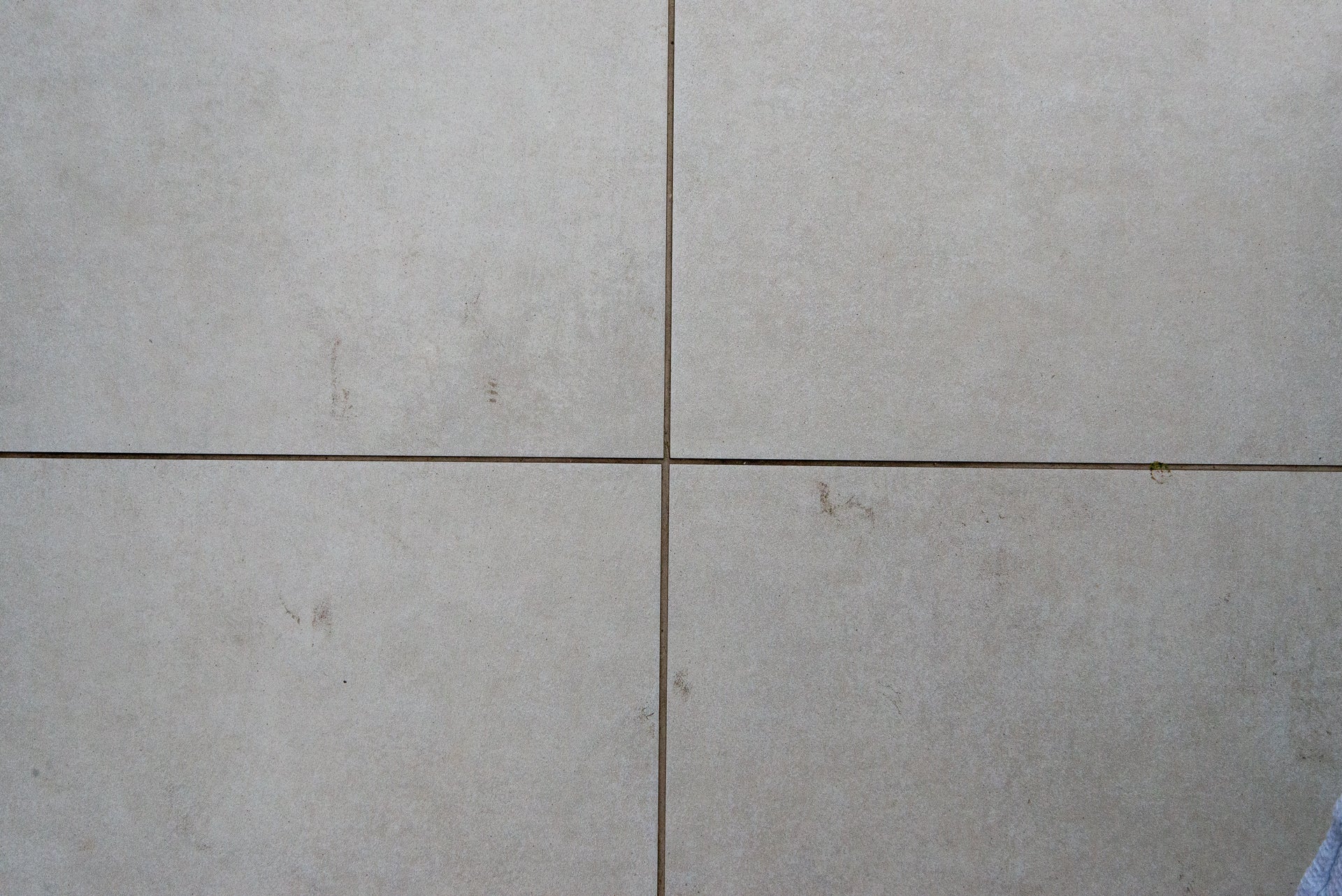 The more expensive Ecovacs Deebot Ozmo 930 does a far better job at mopping and lets you control how much water is used. That said, for occasional use, the Roborock E2 does a good enough job, and you can see by the dirty microfibre cloth that it was picking up dirt. 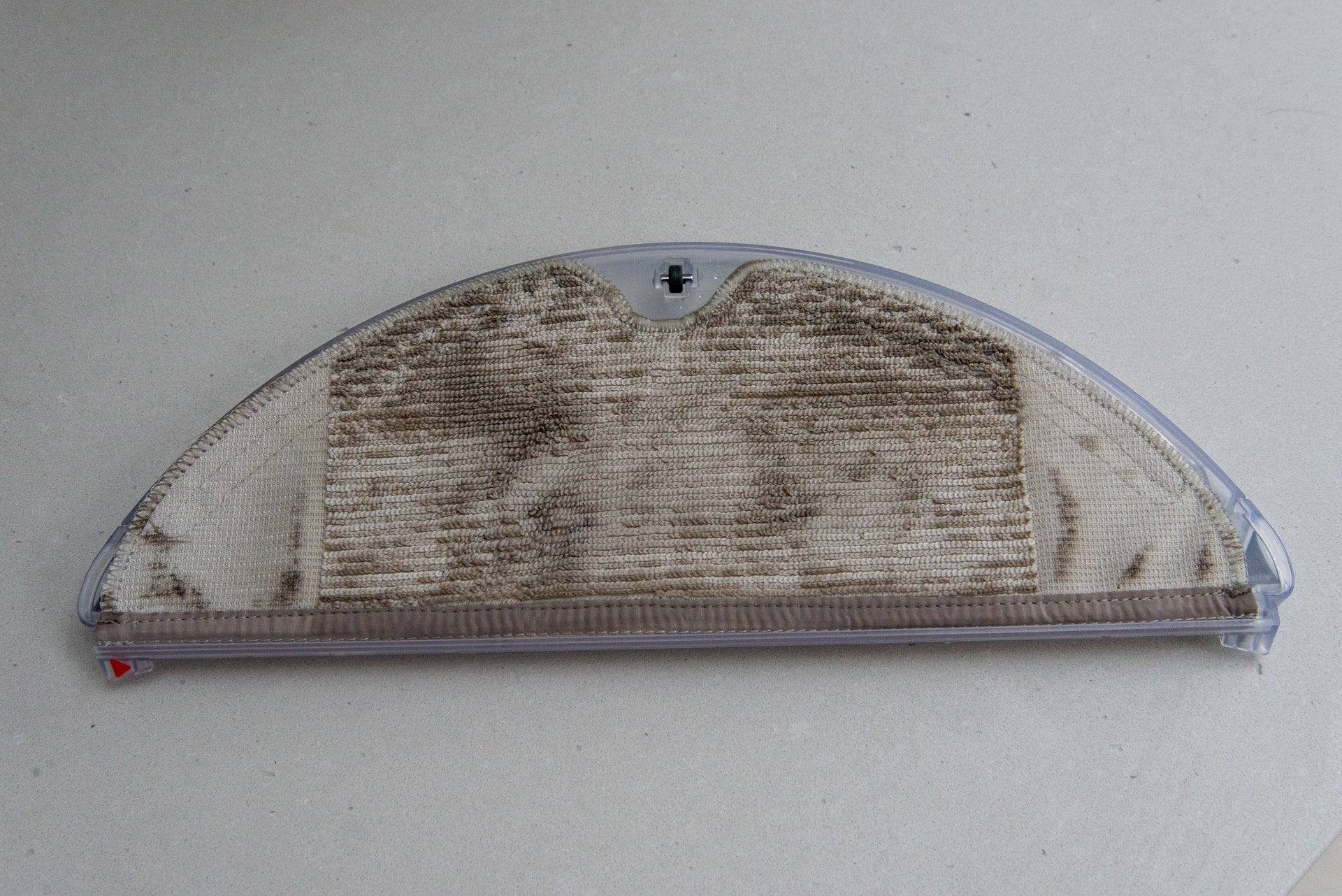 Roborock E2 – How well does it clean carpets and hard floors?

To test vacuuming performance, I spread “X” patterns of dirt on the floor, using a combination of carpet freshening powder and flour. The mixture was placed in the middle of the room, by the side of the room and on carpet.

Starting with hard floors first, the Roborock E2 did a pretty good job. A small amount of dirt was left behind at the centre of the room, although nothing that a second pass wouldn’t pick up. 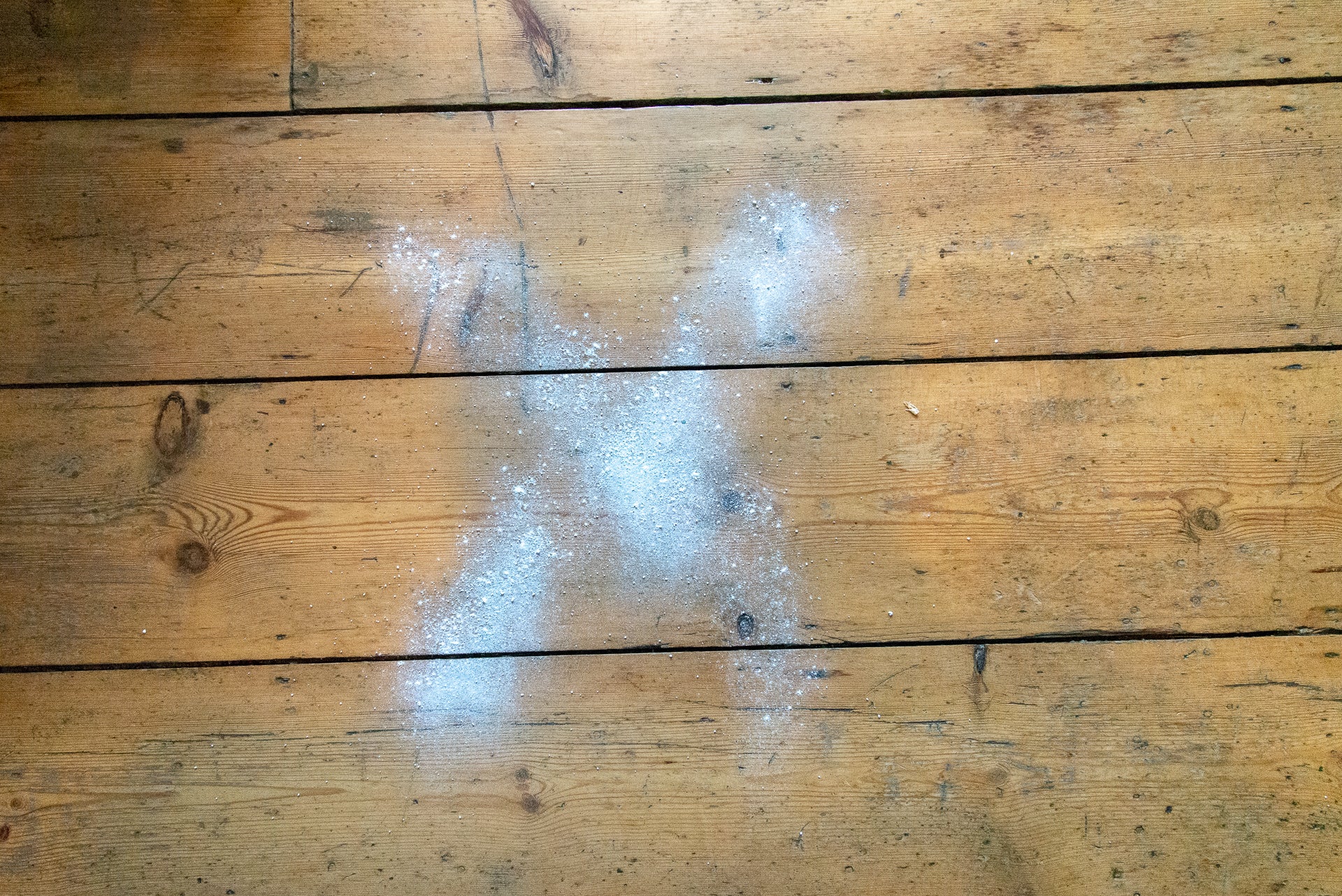 By the side of the room, the results were more disappointing. The Roborock E2 managed to sweep the dirt out from the side, but it didn’t manage to pick a lot of it up, leaving a good chunk behind. 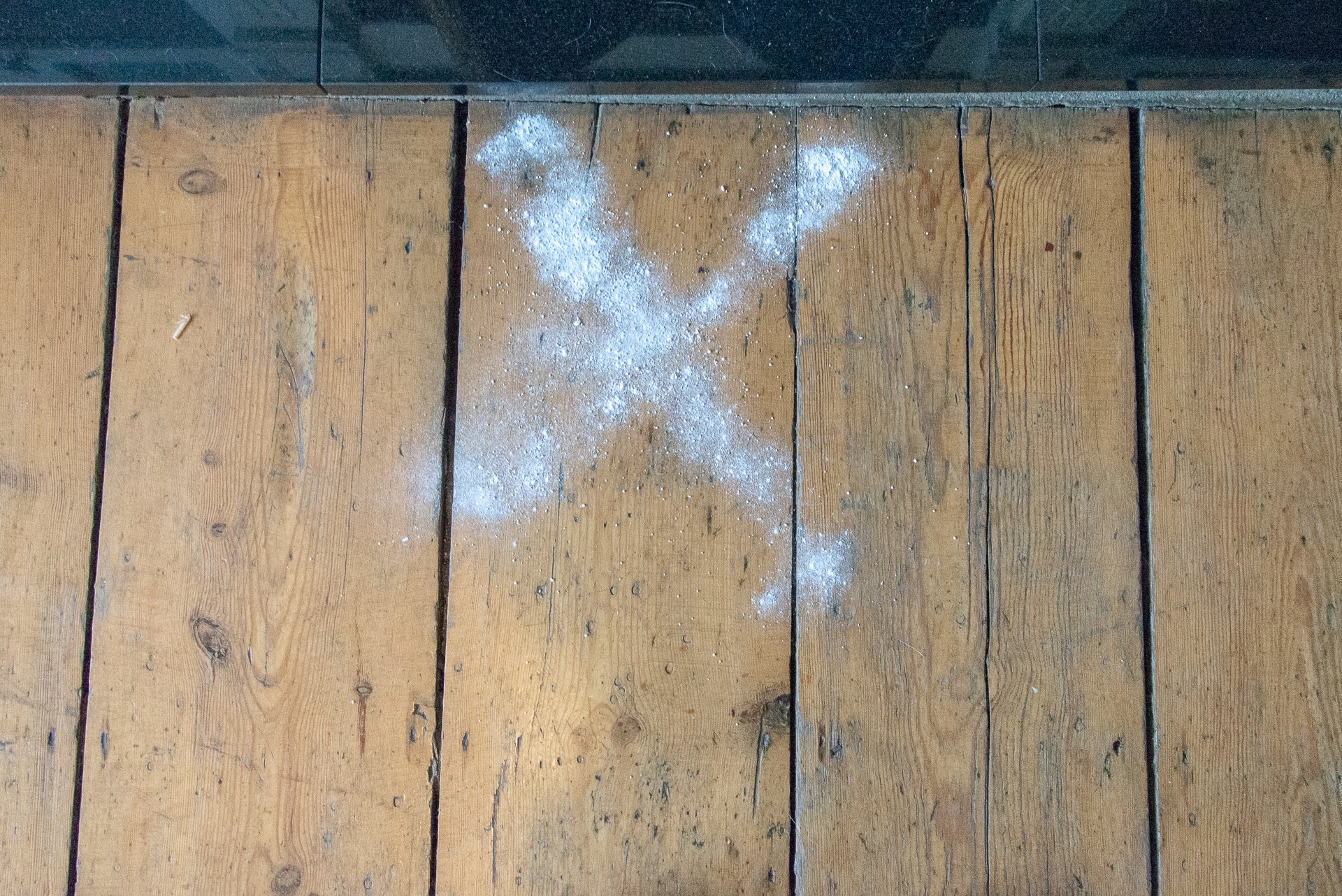 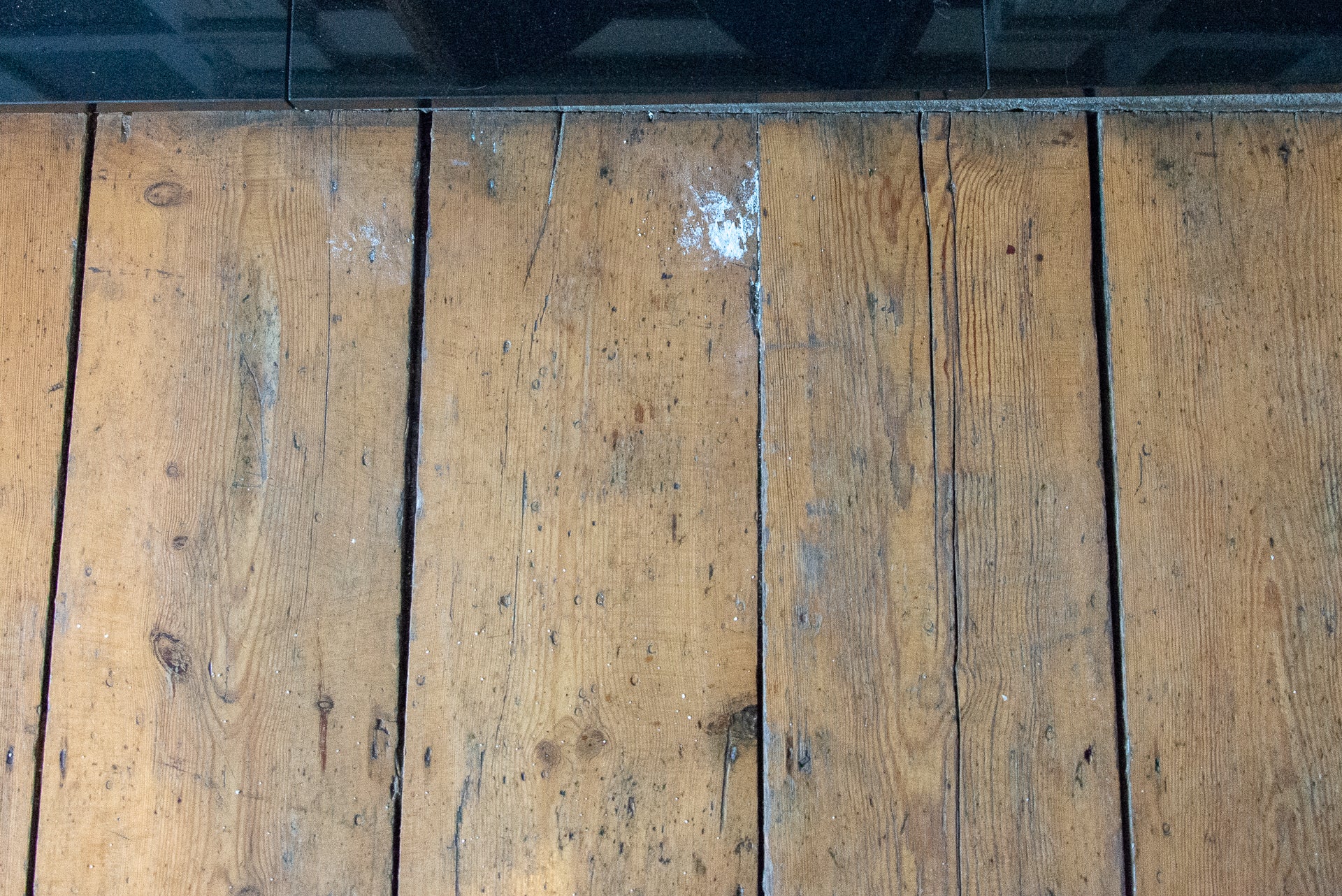 Carpet cleaning, with the Roborock E2 upping power when it hit the rug, was pretty good. There was a trace of dirt behind but it wasn’t significant. 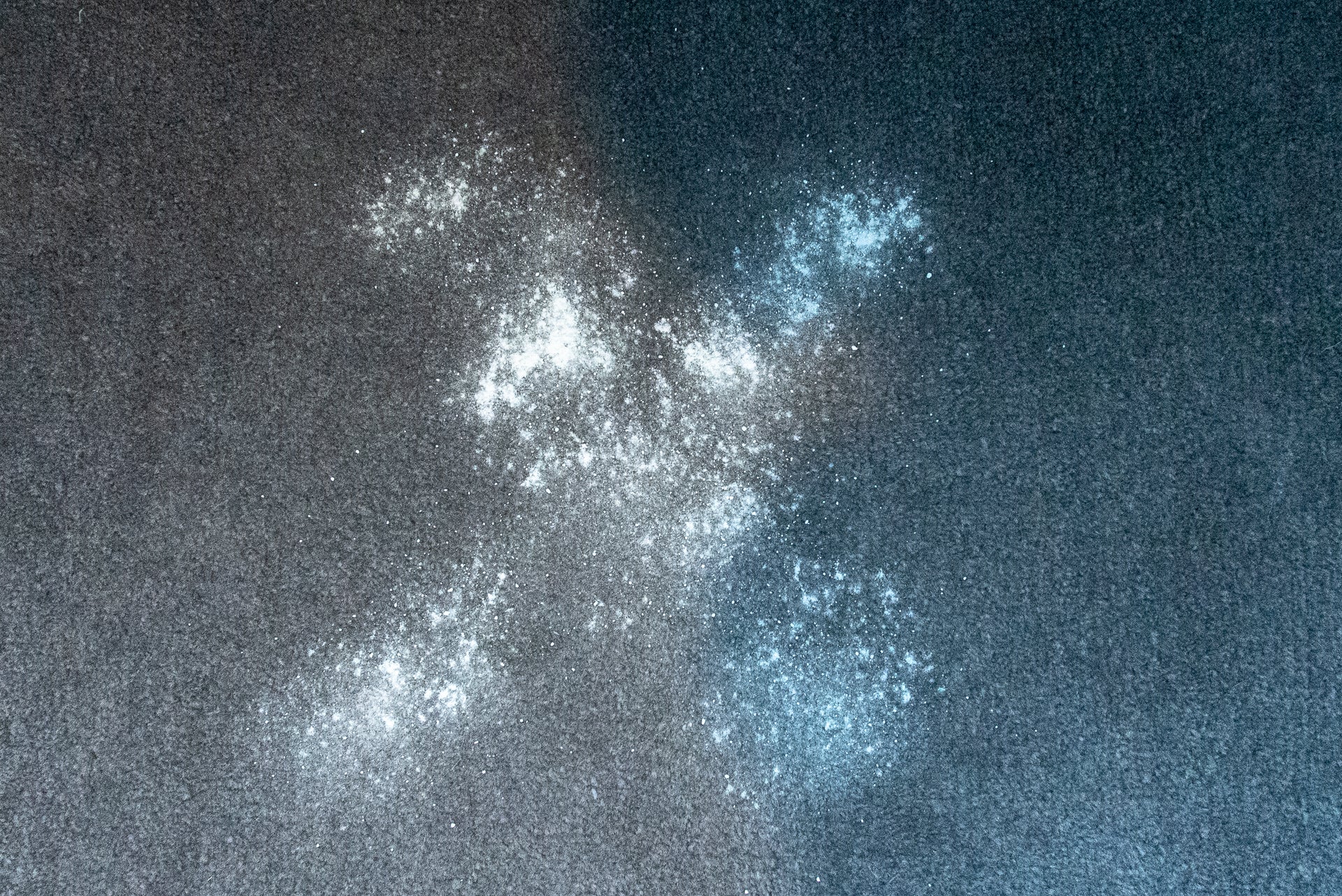 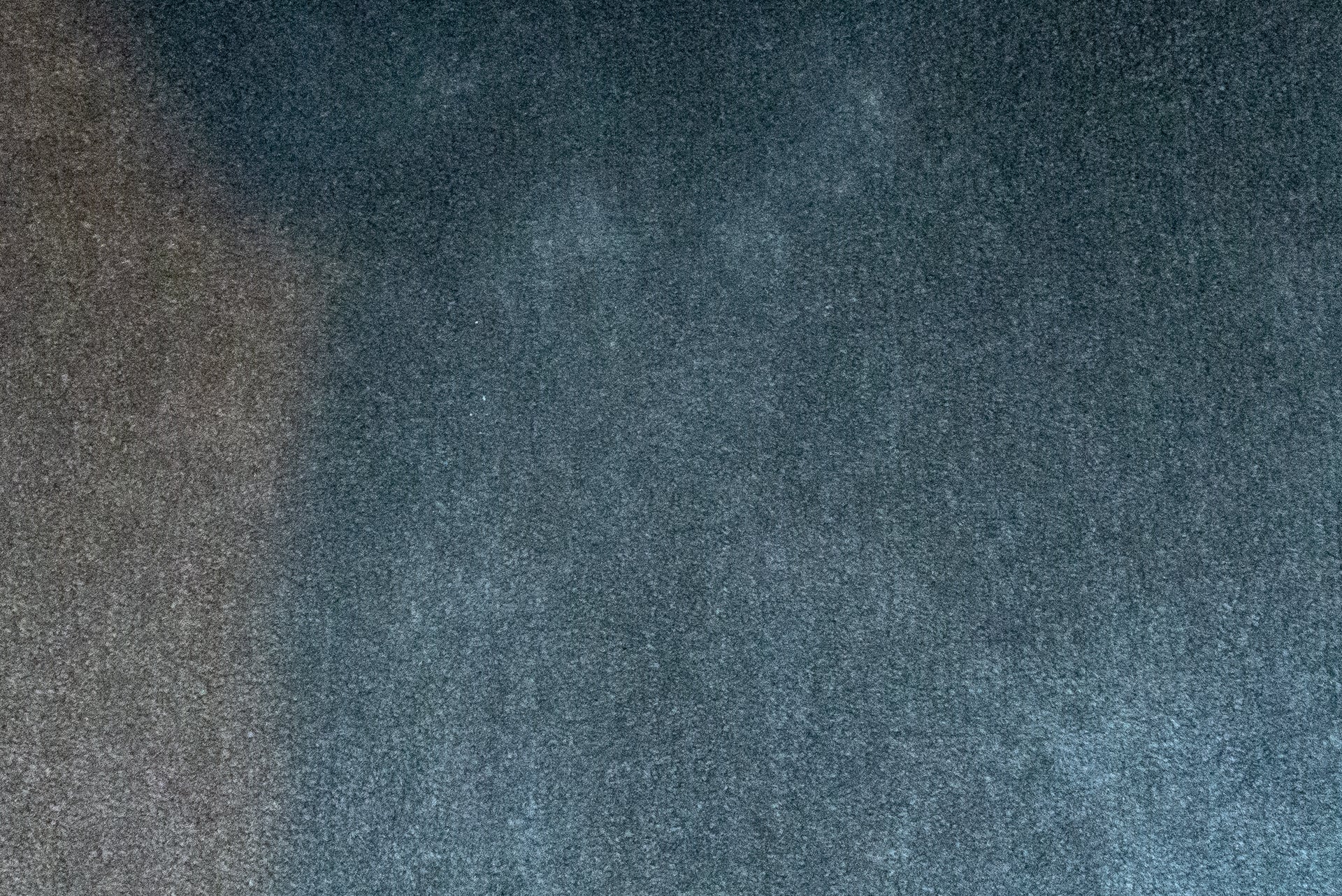 Roborock E2 – How does it cope with obstacles?

The Roborock E2 uses dual laser and LED motion tracking sensors to map out its environment, so it can make a single pass of the room. The robot gently nudged into some objects, but neatly made its way around my test rooms. 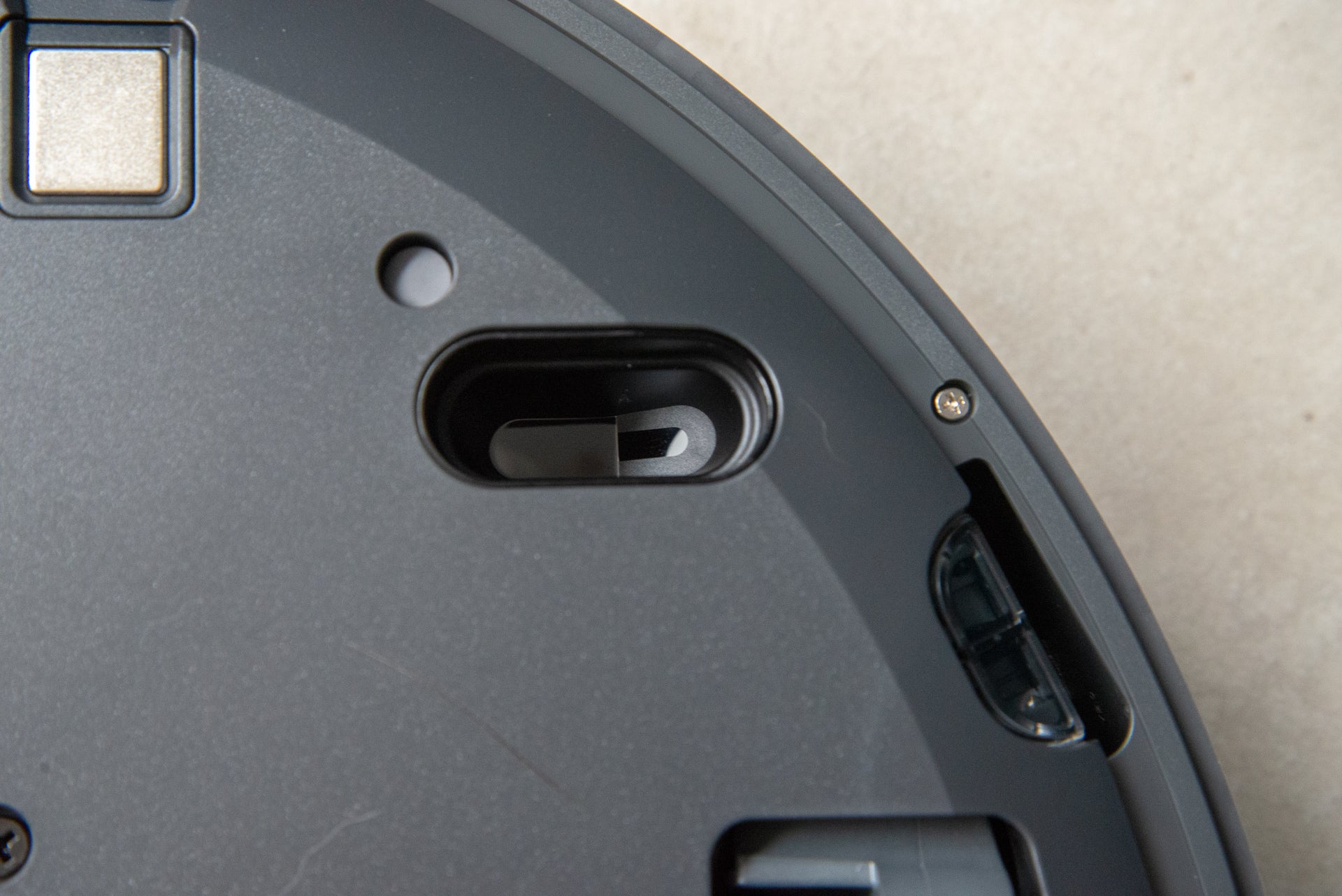 Cleverly, once the Roborock E2 has detected an edge, it moves around so that its single brush sweeps against the side to move dirt; if only it made a second pass to pick up everything.

The Roborock E2 struggled a little with my dining chairs. It didn’t get stuck in them, but nor did it manage to clean between the legs. Despite a gap in the chairs, the Roborock E2 didn’t manage to make it that far under the table.

There’s a cliff-edge sensor, which prevented the robot from falling down the small step into the kitchen.

Why buy the Roborock E2?

Navigating with a higher degree of precision than many budget robot vacuum cleaners, the Roborock E2 punches way above its price. Throw in the fact that it can also perform the occasional mop and it seems a bargain. That said, there are some things that hold it back.

At times the E2 will miss dirt, sweeping it away from the wall and then running away. The lack of Amazon Alexa support is also a touch disappointing, given that the bigger Roborock S5 offers such support. The competition is strong: if mopping isn’t a priority then the Ecovacs Deebot N79S is a better choice.

If you want a robot that will mop brilliantly, then you need to spend a bit more on the Ecovacs Deebot Ozmo 930. For better all-round cleaning, you’ll have to spend extra on one of the more expensive machines on our Best robot vacuum cleaners list.

However, if you’re after a device that can clean and mop at a low price, it’s hard to beat the Roborock E2 in terms of value – although you may need to get it to do a couple of sweeps for the best performance.