Robinson: The Journey is a game about exploration. While many VR experiences drop you in a cockpit and let the gameplay speak for itself, Crytek’s PlayStation VR effort relishes in taking you on an immersive and memorable journey. Throughout the six-hour adventure on Tyson III, I found myself wandering this strange new planet with a sense of childlike excitement. This is the first PSVR game where I truly feel like I’m exploring another world. For many, this story-led adventure will provide welcome relief, proving that virtual reality is a medium worth investing in, offering more than just pick-up-and-play fun.

Meshing bleak Sci-Fi sensibilities with environments lifted straight out of Jurassic Park, fittingly, Robinson: The Journey lets you live out your childhood dreams through the eyes of a child.

Stranded on the strange and dangerous planet of Tyson III, this unfamiliar landscape is experienced through the eyes of Robin, the lone survivor of a mysterious crash. A year has passed since his escape pod wound up on Tyson III, and thanks to the help of his miraculously intact, floating AI companion, HIGS, Robin has managed to forge a new life for himself. 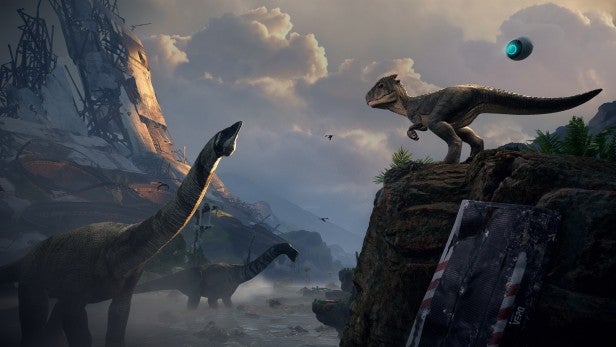 Impressively, in that short time our young protagonist has built himself a secure home, constructed a small farm and even managed to befriend a baby Tyrannosaur. Pretty solid going, all things considered. Yet just as I’m starting to enjoy playing fetch with my pet dinosaur, a routine walk leads me to discover a damaged HIGS unit from my old ship. Finding audio files stored in the wrecked droid, I discover chilling new information about the mysterious crash that landed me here. Desperate to see if there are any survivors, I leave the safety of Robin’s home and embark on a dangerous expedition to uncover the truth.

While Tyson III’s engaging world and interesting storyline ultimately make the experience, my first impressions of Robinson The Journey weren’t quite so positive. After stepping outside of the highly detailed escape pod Robin calls home, I’m greeted by a planet draped in some of the lowest textures I’ve seen on PSVR. Where experiences like RIGS confine players to one area and manage to pull off some pretty astounding visuals, the standard PS4 seems to struggle under the weight of rendering Crytek’s ambitious semi-open world.

The brilliant art design of Tyson III’s lush flora and fantastical creatures are muddied by incredibly low image quality, meaning environments appear hazy, lacking the clarity that I’ve become accustomed to on the platform. With such an interesting setting, it’s a shame it’s not done justice. Crytek has promised a noticeable bump in visual fidelity for PS4 Pro owners, but for those of us still reeling from the pricey VR outlay, it’s disappointing. Thankfully though, the overall quality of the experience means that I soon forgive the patchy visuals and surrender myself to the game’s imaginatively designed world. 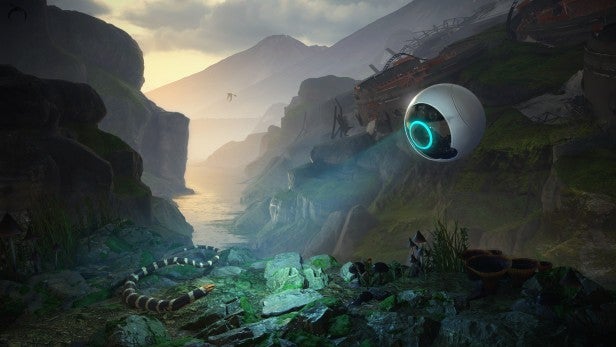 It seems as though this ambitious world doesn’t just impact the fidelity of the visuals, however, but the game’s movement too. No matter what the situation, Robin is only ever able to meander at a snail’s pace. Whether you’re strolling through a jungle or fleeing from hungry raptors, you’re always confined to the same speed. Sensibly then, Crytek has made sure that Robin never has to wander too far. Embracing the game’s theme of discovery, the slow paced stroll that you’re confined to gives you time to observe and interact with the weird and wonderful world you find yourself in.

Without the ability to run from danger, your only chance of survival is the tech at your disposal. Wandering through Tyson III’s varied and dense world, the most useful item is your multi-tool.

Robin uses this device – shaped suspiciously like a Move controller – to gather information on creatures and manipulate all manner of objects around him. Bizarrely, Crytek decided to pull Move support for the game at the last minute, meaning I’m left clutching a wand-like device in the game, while holding my very un-wand-like Dualshock 4. With Move support promised at a later date this will eventually look a bit less weird, but thankfully the controls work pretty well anyway. With the left analogue stick controlling movement, the right one manipulates the camera, and your eyes function as the multi tool’s pointer.

As I make my way across each new treacherous environment, I find myself fleeing Velociraptors, darting under Brontosauruses and dodging Pterodactyls, using the multi-tool to save my skin. As well as being used to collect information on the many species you encounter, the multi-tool also allows you to lift and throw objects. More excitingly though, the multi-tool gives you the power to make childhoods everywhere, as it can be used to direct Laika, your adorable pet dinosaur.

Finding myself in all manor of sticky situations, the multi-tool allows me to get through intact. Whether it’s through commanding Laika to fetch an unreachable item or by throwing boxes to distract hungry prey, the multi-tool lets you interact with your environment in fun ways. The puzzles on offer are fairly varied too, with the two basic mechanics offering enough variety that the solution to your problem won’t always be immediately obvious. 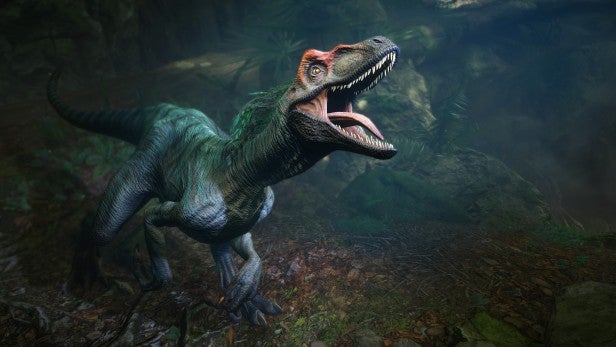 While Laika and the multi-tool bear the brunt of the puzzle solving, occasionally you’ll need to call on your friendly floating orb for help. Showing the environment from a bird’s eye view, AI buddy HIGS uses a mini-game similar to Deus Ex’s hacking sections as he connects different circuitry until he can bring damaged tech back to life. These sections aren’t particularly exciting, but provide a welcome sense of variety when they appear.

The one aspect where the lack of motion controls feels odd however, is in the game’s climbing sections. Tasked with tracking down HIGS units littered across the planet, I’m regularly scaling cliffs, trees and anything else with a handhold in order to progress. Looking to each handhold with PSVR’s headset, a quick squeeze of either trigger moves each hand to where you’re aiming. The feeling of climbing has been used to great effect in motion controlled games like Everest VR and Crytek’s own The Climb. After experiencing these climbing with just a controller feels like an unnecessary step backward.

Thanks to PlayStation VR’s camera tracking space being pretty small, I also regularly find myself fighting against it. Scaling rock faces, I often have to contort my neck into some pretty weird positions in order to reach certain handholds, standing up and doing yoga stretches mid-climb that my stiff games journalist physique was definitely not made for.
Yet while Crytek’s first PSVR outing definitely has it’s problems, they still don’t stop it being one of the most enjoyable titles on the platform.

Virtual reality has given developers everywhere the greatest gift a creator can hope for – a new medium to explore. Without a design rule book to follow, Crytek have gleefully created a first person walking simulator that manages to feel completely unique. While many PSVR experiences claim to let you inhabit another world, Robinson: The Journey fully embraces the medium and in doing so comes the closest to actually delivering on that promise. It’s not without its flaws, but still manages to deliver an ambitious, narrative-led experience that offers the kind of immersive escapism the medium was made for. It may be overpriced and not much of a looker, but Crytek’s latest still sits comfortably as one of the most essential PSVR titles to date.