The Roberts Stream 94i is a tweaked version of one of Roberts’ classic radios. It’s similar to the Stream 93i, the company’s long-standing Wi-Fi model, but features Bluetooth and a more attractive design.

This is the ultimate kitchen radio, and sounds better than most DAB sets too.

It can play internet radio, take Bluetooth audio from your phone, and use Spotify Connect. The only slight issue is that, at certain volumes, it can sound smaller than the recent Pure Siesta Home. It uses less traditional speakers to get closer to the sound output of a wireless hi-fi speaker. 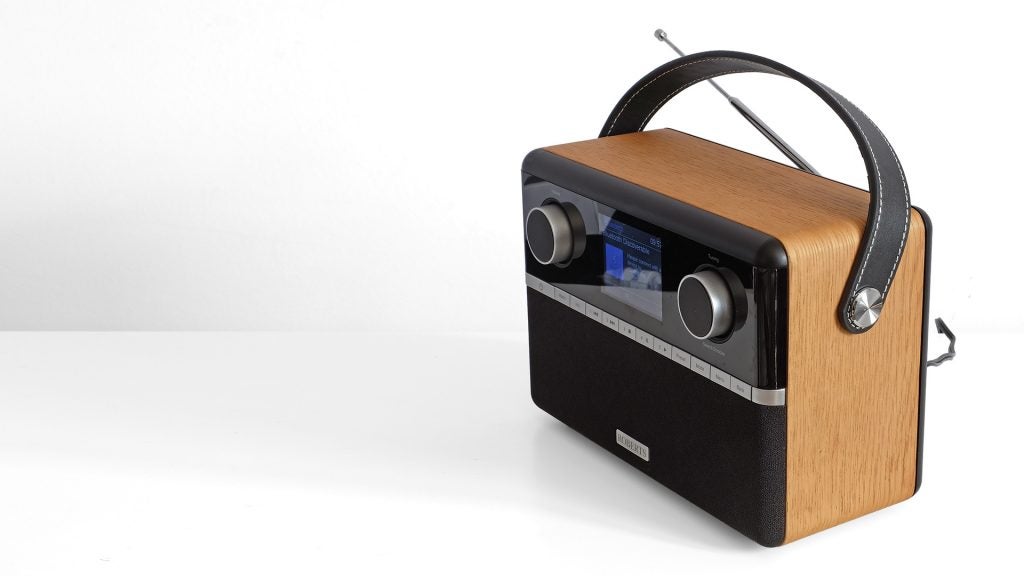 Roberts’s streaming radios weren’t known for their good-looks. Its Revival radios adopt style elements from the 50s and 60s, for a retro look that never seems to age. The Roberts Stream 83i, however, looked like an 80s ghetto-blaster.

The Roberts Stream 94i is far more tasteful, taking the visual improvements made in the 2014 Stream 93i and rounding off the edges for a softer appearance.

It’s likely to appeal if you find the retro Roberts Revival twee, and is one of the best-looking radios Roberts has made to date. 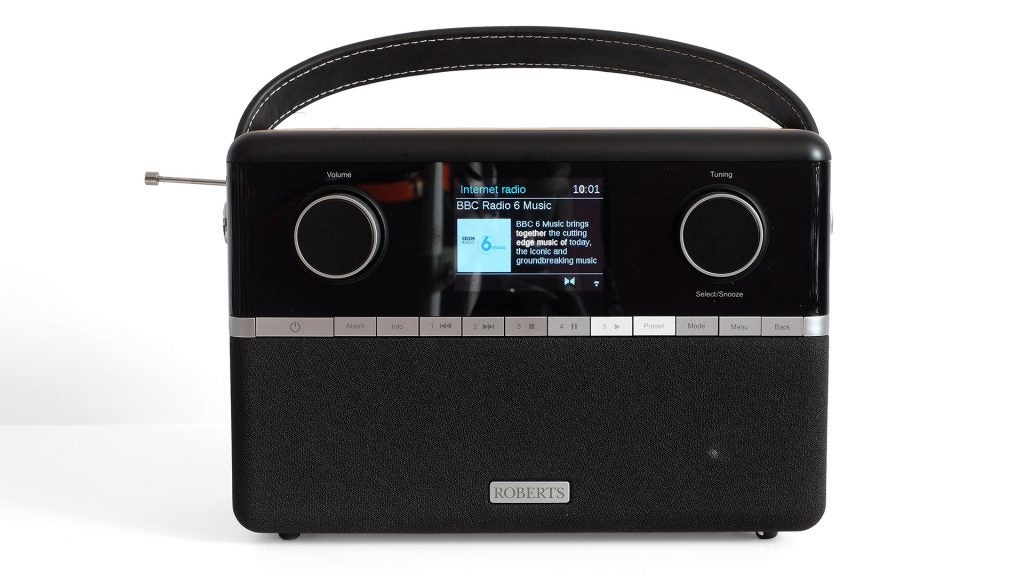 Just keep your expectations of its build in check. The Roberts Stream 94i doesn’t have the luxury construction of a B&O speaker.

The wood covering its sides is a laminate (it does have a wood – likely MDF – speaker enclosure); the silver buttons and knobs on its front are plastic, not metal; and its screen is a recessed-looking LCD. An OLED would have looked better against the black surround.

However, the Roberts Stream 94i’s £200 cost isn’t actually a “luxury” price, even if it does seem a lot to pay for a radio. 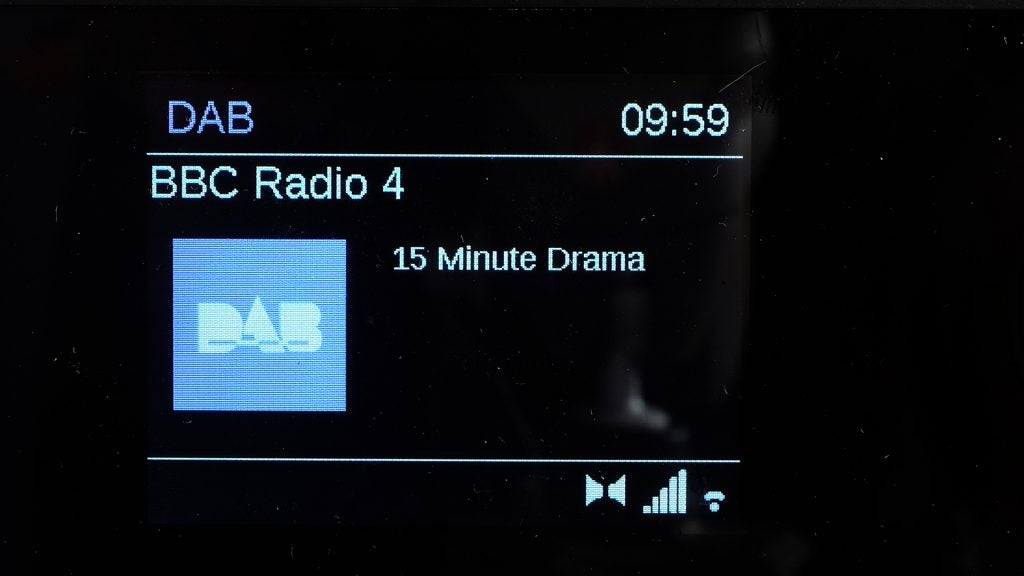 The strap is the other big design change since the Stream 93i. That radio has a fixed metal handle; this one a synthetic leather strap.

Like the more rounded shape, further softened with wood panelling, this strap’s style is closer to that of the popular Revival radios.

The Roberts Stream 94i’s buttons have become slightly less clear as part of this revamp, but they look much better. Each button’s function is printed on the front, but high-contrast clarity has been dropped in favour of style. You might not appreciate this if you wear bifocal glasses.

They remain a godsend, however, if you want to avoid fiddling about in menus. There are five radio preset buttons on the front, which double as playback controls when using Bluetooth or Spotify. You can access up to 40 station shortcuts with the “preset” button. 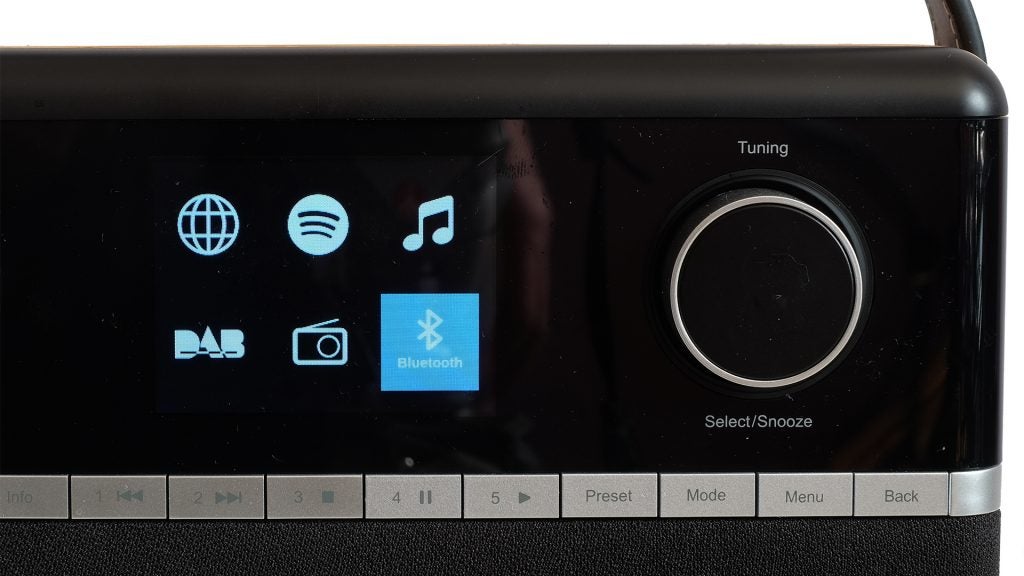 The Roberts Stream 94i does a lot more than just DAB and FM radio. Press the Mode button and you can scroll through the Bluetooth, Spotify Connect, Internet radio and My Music modes. This last one, My Music, lets you play files shared over your home network, or from a USB stick plugged into the Roberts Stream 94i’s rear.

Roberts probably doesn’t imagine most will use this radio as a networked audio player, but it can do the job. And if you find navigating through a library with the two control knobs fiddly, there’s another method.

The Roberts Stream 94i can use the Undok phone app. This is a cross-manufacturer platform designed to let smaller speaker makers use multi-room features, without having to develop their own software. Most of you won’t have another Undok-ready speaker, but it’s used by companies such as Riva, Ruark and Goodmans.

In the Undok app you can look through any tunes stored on a USB or your home network, switch between Roberts Stream 94i modes, and select radio stations. You can control the radio completely through Undok. This is particularly useful for internet radio; there are so many stations to browse, it suits a phone screen better than the radio’s interface. 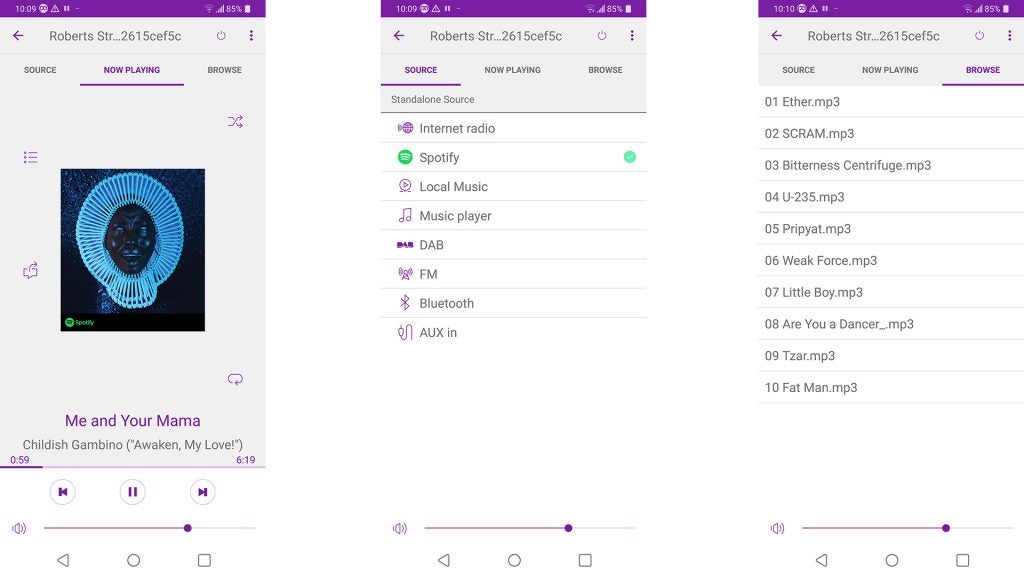 Use Spotify? You can beam music directly to the Roberts Stream 94i from the Spotify app using Spotify Connect.

The last Stream-series radio had these features too. But it didn’t have Bluetooth. Bluetooth lets you stream audio from phone apps such as YouTube.

The Roberts Stream 94i has a good spread of older features, too. You can set two alarms and a kitchen timer, which is handy for cooking. To snooze a morning alarm, simply press in the right control knob. 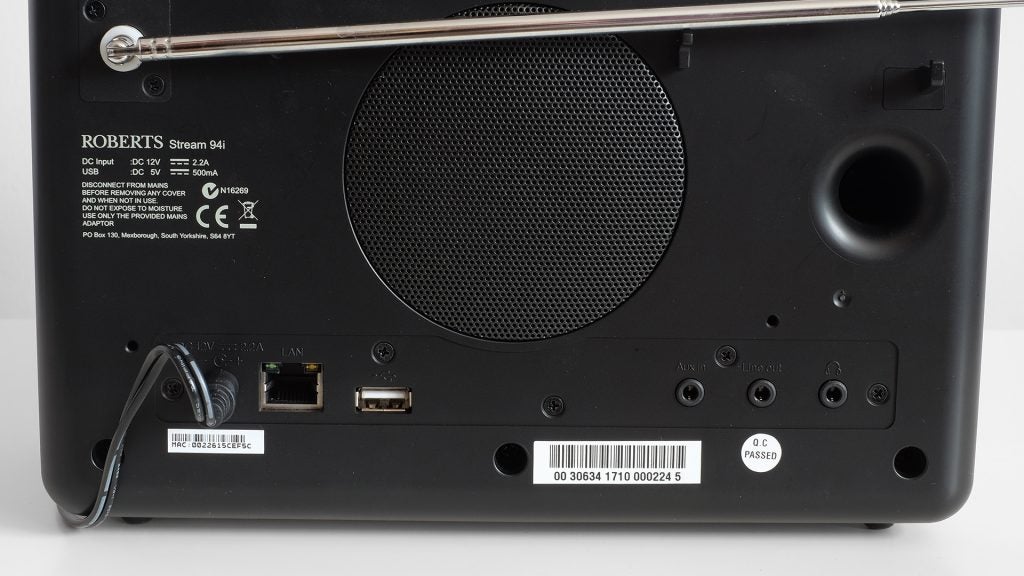 On the rear is a line-in for non-wireless sources, a line-out to connect to a hi-fi, and a headphone jack. There’s also an Ethernet socket – handy, if you use a Powerline, or other, Wi-Fi access point to make up for poor signal in your home.

The Roberts Stream 94i can also be used battery-powered, but one isn’t included in the box. Its mechanic is a bit unusual: the £40-45 battery pack hooks onto the rear of the device and plugs into the AC adapter slot. It’s a slightly awkward solution, but at least you have the option. Roberts says the battery lasts 6-10 hours. 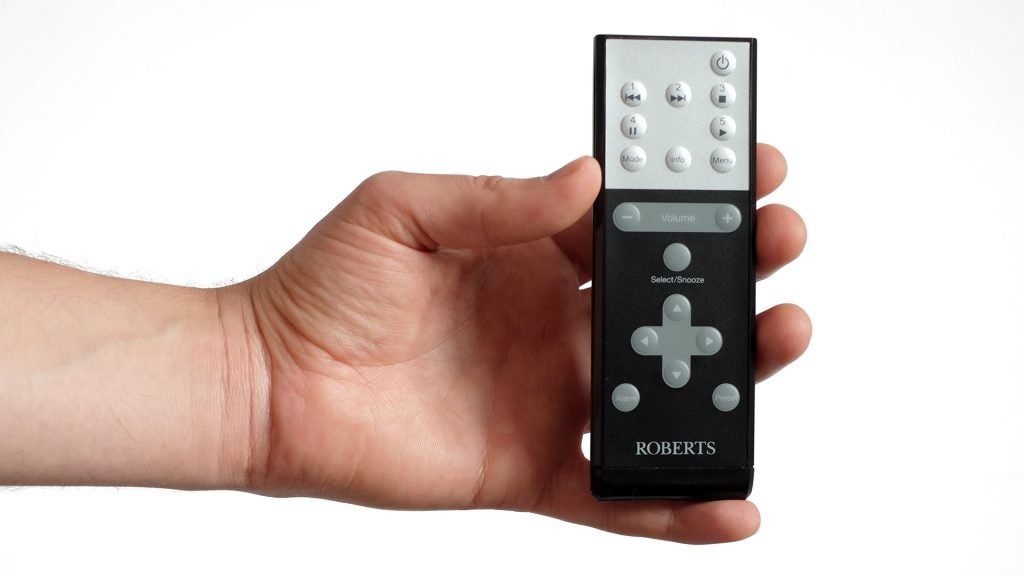 You get a remote control, too, which lets you control playback or even turn off your alarm. That’s handy if you’ll use the radio on a windowsill rather than a bedside table.

The Roberts Stream 94i does more than most speakers. However, it doesn’t let you talk to Amazon digital assistant Alexa, a feature found in some wireless speakers (but no radios yet, to my knowledge).

This radio has the same speaker setup as the Stream 93i model. There are two small drivers on the front and a much larger one on the back, which acts like a subwoofer.

It provides a good combination of treble clarity for spoken-word stations, and bass power when you listen to music. A radio such as the Roberts Stream 94i isn’t really meant for party duty, or to replace a big hi-fi. However, I’d happily use this as my speaker to listen to music casually during the day.

And while the front speakers are used for just about all output but the bass, rather than just treble, they still make spoken-word stations sound very clear. I didn’t have to EQ-out any treble harshness either. +/- 14dB treble and bass controls offer good control over the speaker’s character too. 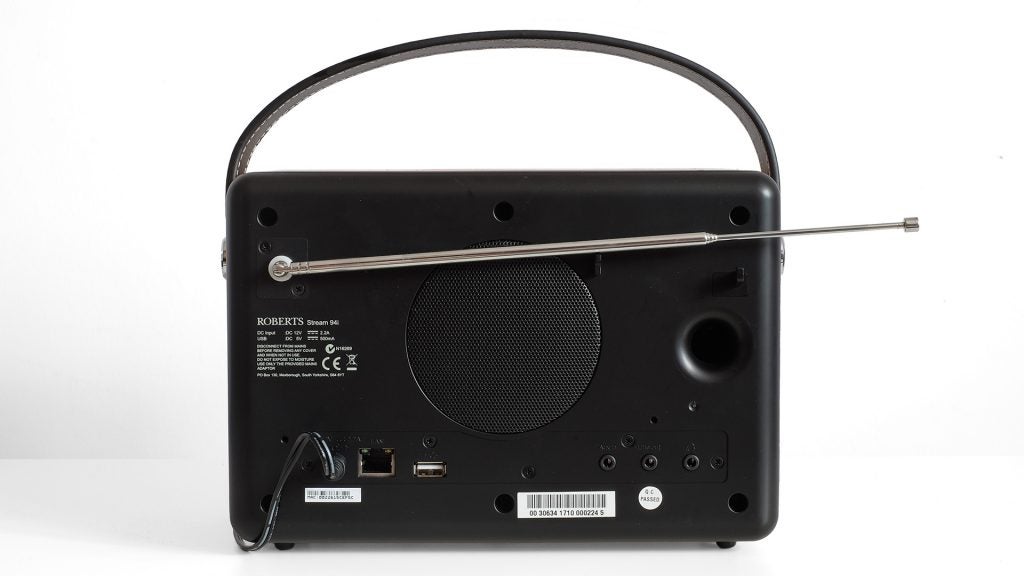 A lot of DAB radios that look like the Roberts Stream 94i use a couple of full-range drivers, which can leave bass lines and kick drums lacking weight. However, the dedicated bass speaker here fills in these frequencies. This radio doesn’t feel out of its element when playing music at anything but low background volumes.

However, at mid-high volumes, the Pure Siesta Home performs a little better. The Roberts Stream 94i is quite treble-forward, while the Pure’s larger, main driver has stronger mids. This helps to make vocals sound fuller and more natural. Here, too, much of the vocal is represented in the treble and upper-mids.

It’s a common effect when mids are handled by very small drivers. At 50% volume, the Pure also has a larger soundstage and slightly better bass impact.

It isn’t an outright win for the Pure, though. It has less evident treble clarity, a darker sound, and the Roberts also goes louder.

To put the Roberts Stream 94i in a wider sound context, it has significantly worse bass depth than the Sonos One. A dedicated subwoofer just can’t compete with the R&D put into that speaker’s long-throw driver. The Sonos also sounds better and bigger than either the Pure or Roberts radios at high volumes. In the DAB radio class, though, this is a star. 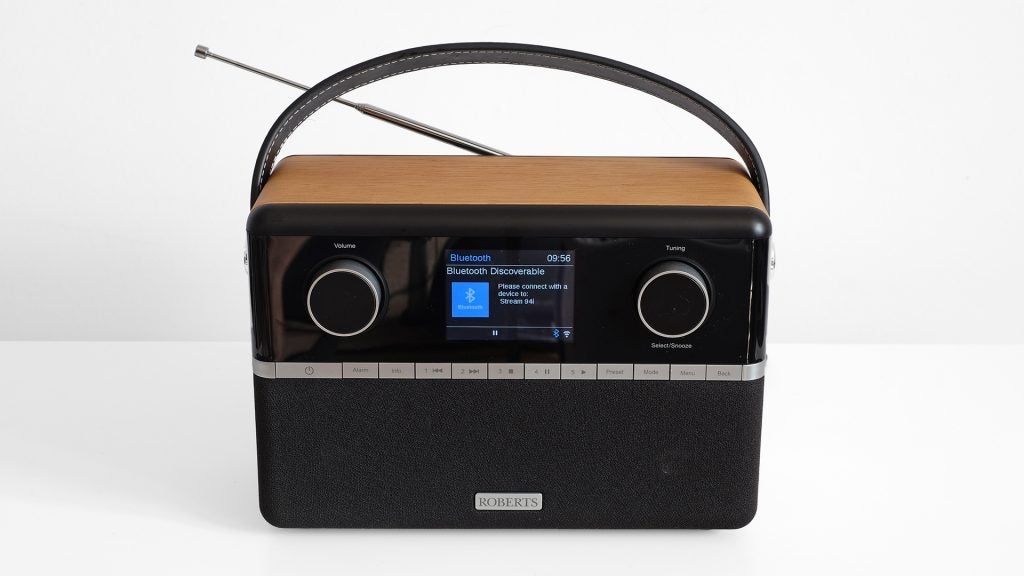 The Roberts Stream 94i is one of the best DAB radios available. It looks better than any in this series to date and it has every wireless feature you could want – except digital assistant support.

Sound is very good. A sub driver on the back gives music more weight than the average DAB set.

At around 50-60% volume, the Pure Siesta Home performs slightly better. However, it doesn’t have internet radio, Spotify Connect or any Wi-Fi features, opting for a CD player instead. Not everyone has made the shift to streaming, but at this point we’d rather have Spotify Connect than a CD player.