All-in-one music boxes are the perfect choice for anyone who wants to get a great audio experience but doesn’t have space or money for a full Hi-Fi system or simply doesn’t want to deal with the mess of cables that a separates setup entails. Now you can get an iPod dock, CD player, DAB radio, speakers, and amplifier in a single unit that will fit neatly on a side cabinet or TV stand. No wonder, then, that Roberts has seen fit to enter this burgeoning market with its Sound range of products.


There are two models to choose from, the Sound MP-53 and smaller Sound MP-43 (Roberts seems very inconsistent with its naming, sometimes listing these models without the Sound name and without the hyphen, i.e. Roberts MP43) and it’s the larger that we’re looking at today.


Immediately when you remove the MP-53 from its box you’re put in mind of a quality device. The glossy black finish looks deep and rich while the front panels, speaker grills, and iPod dock are all finished to a high level. There’s also a reassuring weight to the whole thing, despite its compact dimensions of 35cm x 12cm x 26cm. This is mainly due to its solid wooden interior construction. It’s not quite the same level of finish you get on more expensive (£500) rivals like the Vita Audio R4 but it’s not far off.


The MP-53’s CD drive is of the slot-loading variety (as found on most of these all-in-ones), so you won’t be able to use small or misshapen CDs, which may disappoint fans of Green Day. 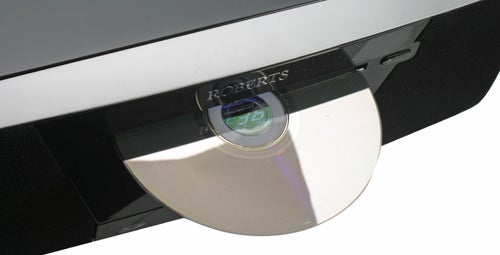 Below the CD slot is the display, which uses an LCD panel. This means visibility can drop off when viewing it from an angle but this drop off is not as severe as we’ve seen on many similar devices. The display is also commendable for the amount and nature of information it carries. 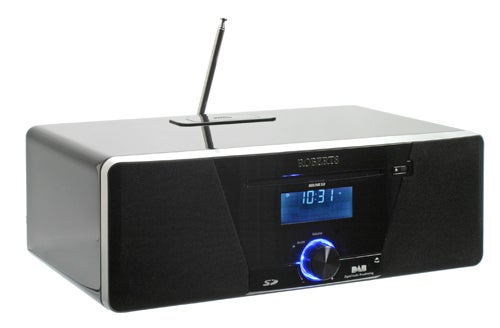 At the top there’s a large clock display that’s easily visible from across a large room. Below this are two lines of generic alphanumeric characters for displaying date, radio station, track, and other miscellaneous information. Dotted above these and to either side of the clock display are further specific icons for displaying volume level, audio source, alarms, playback modes, etc. It’s a very clear and easy to use display, which is far from a given on such devices. 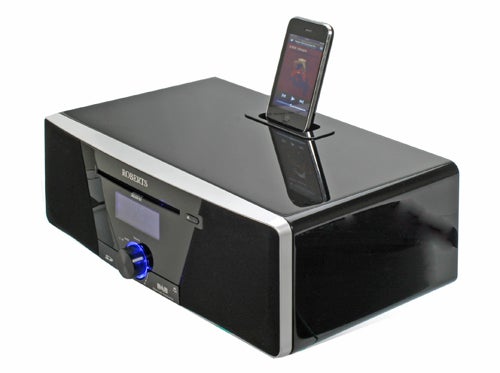 Below the display sits the only control (bar the CD eject button) on the unit itself, which has a black anodised machined metal finish. This is the volume dial that also doubles as the power button when pressed. As with the rest of the device this feels very sturdy and well made with no hint of wobble or rattle. Surrounding it is a ring of blue light that we think is rather fetching. However, Roberts has been mindful of light sleepers (or of those that are easily distracted) as the brightness of the ring of light, along with the backlight for the display, can be turned down when in standby mode.

Further down the MP-53’s front is a little push-to-open flap that conceals an SD card slot and USB port. These can be used to play mp3 and wma audio files as indeed can the CD player. Playback is quick to start and quality is good but, despite the display showing a scrolling marquee listing artist, album, and track information, it didn’t seem able to read the ID3 tags of our sample tracks; it only seemed to play tracks in the correct order if the file names included the track number. For someone like myself who keeps their music in exacting order, this shouldn’t be a problem but if your collection is a bit more haphazard you may struggle to get the MP-53 to play the music you want in a timely manner. 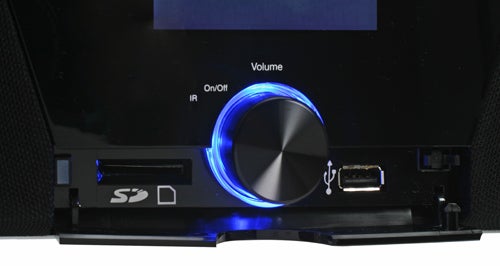 Thankfully the iPod support is a bit more comprehensive with full menu control courtesy of the MP-53’s remote. The iPhone also works though no compatible insert for the generic iPod dock system is provided and there’s no speaker isolation so you still get interference noise from the phone’s network signal, unless it’s in flight mode of course. That said, the interference isn’t as distracting as on some devices and we were quite happy to listen for extended periods without engaging flight mode.

Around the back, things are fairly Spartan with just headphone, line level output, and auxiliary input jacks and an optical SP/DIF digital audio output alongside the power socket and aerial. While this may not sound like much, when you’re talking about a device that can do so much in the first place, it is in fact quite adequate.


Having touched briefly on the remote a moment ago, we must say this is one thing that really lets this device down. It looks very cheap with its big, almost toy-like rubber buttons. Granted, it still functions perfectly well despite a less than inspired layout, but it’s quite a disappointment considering the premium look of the MP-53. 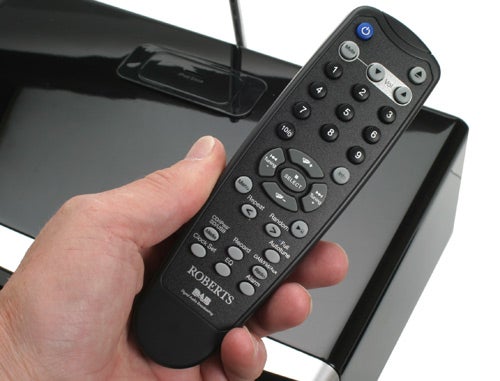 With no time shift facility or an equivalent to the intellitext feature seen in Pure’s DAB Tempus-1 S, the MP-53 isn’t the most fully featured radio. However, it does offer basic manual recording of both DAB and FM stations and CDs to USB or SD storage. You can also store 20 station presets and all the usual RDS information is supported. There are also two alarms on offer each of which can be set to go off once, daily, on weekdays or at weekends and you can choose from all the MP-53’s sound sources or a buzzer for the alert.


Unlike many similar all-in-one systems the MP-53 doesn’t use a 2.1 speaker system and instead relies on just two front-facing speakers. Nevertheless, the sound it produces is plentiful in both the bass and volume departments and will adequately fill a sizeable living room with full luscious sound. However, it’s not without fault. In particular, there’s a lack of mid-range, which oddly enough is something we’d normally expect from a 2.1 setup. This doesn’t leave any music sounding bad per se, but it can sound a bit hollow next to more accomplished competition like the Meridian F80 and Vita Audio R4, though this is largely offset by the price.


There are six preset EQ settings on offer, ranging from Rock to Jazz, as well as individual bass and treble controls, and although those all had noticeably positive effects for their genres, we found the MP-53 sounded best set to the ‘flat’ EQ setting for the wide variety of music we listened to.


The Roberts Sound MP-53 is a great all-in-one home audio system that packs in plenty of features and sounds pretty decent as well. There are DAB radios with more features, better sounding CD players, and more elegant iPod docks but few things can match the MP-53’s abilities for the same price.