What is the Roberts Revival RD70?

The Roberts Revival RD70 is a new version of a DAB radio you’ve probably seen before. Perhaps years ago.

Roberts hasn’t messed with the look of this radio much, because almost everyone who buys a Revival does so because they look great. This R70 is similar to the older iStream2, but it loses Wi-Fi and internet radio, and gains Bluetooth plus a new display panel.

The £199 Roberts Revival RD70 does not sound as good as the best wireless speakers around this price. However, if simple radio functionality and a classic look are what you want, this is just about the best option around. 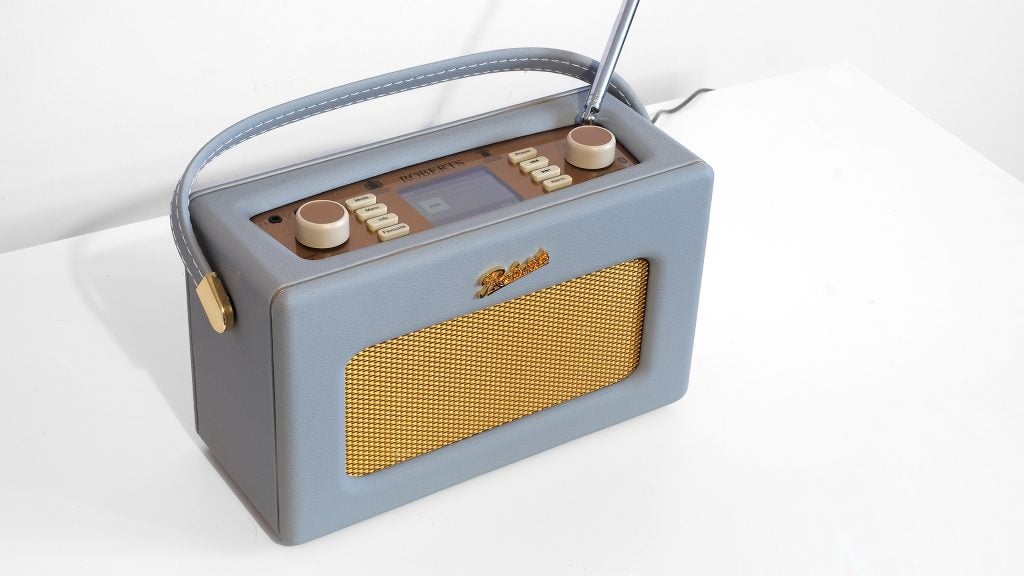 There’s a good chance many of you will have seen a Roberts Revival RD70, even if it was in a shop or on a TV show. This is perhaps the most famous modern DAB radio design.

It takes its inspiration from radios of the 50s. But the look has managed to seem “current” over the past decade despite the massive changes in tech and culture.

It’s quite simple, really. The Roberts Revival RD70 has a faux leather outer with a gold coloured grille on the front. There’s no touchscreen, just buttons and knobs, giving it a cosy familiarity miles removed from the voice assistant speakers we often review today.

You press a button, it turns on. Voila… radio. 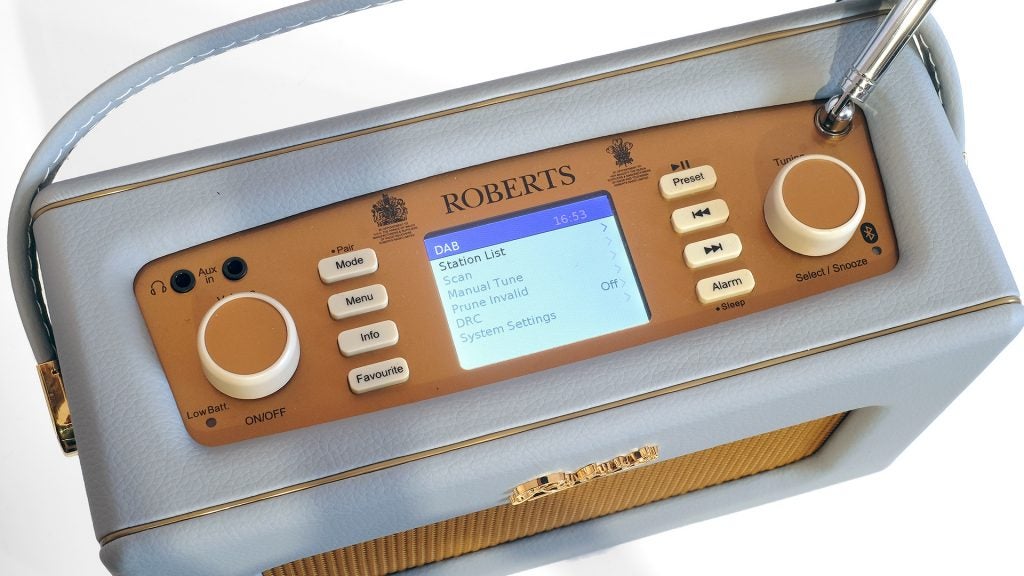 The Roberts Revival RD70 has a wood frame, and the leather on its surface is synthetic. You need to be fairly careful with it. We’ve managed to take chunks out of the finish with a knock in previous models.

Roberts has fixed one other common breaking points in its radios here, though. Most other Roberts models of this style have a hinged back door that gives access to the battery compartment.

We’ve seen a bunch of broken Roberts radio doors over the years, and the RD-70 now has a fixed back.  The battery compartment is accessed from the bottom. It’s a more sensible design. 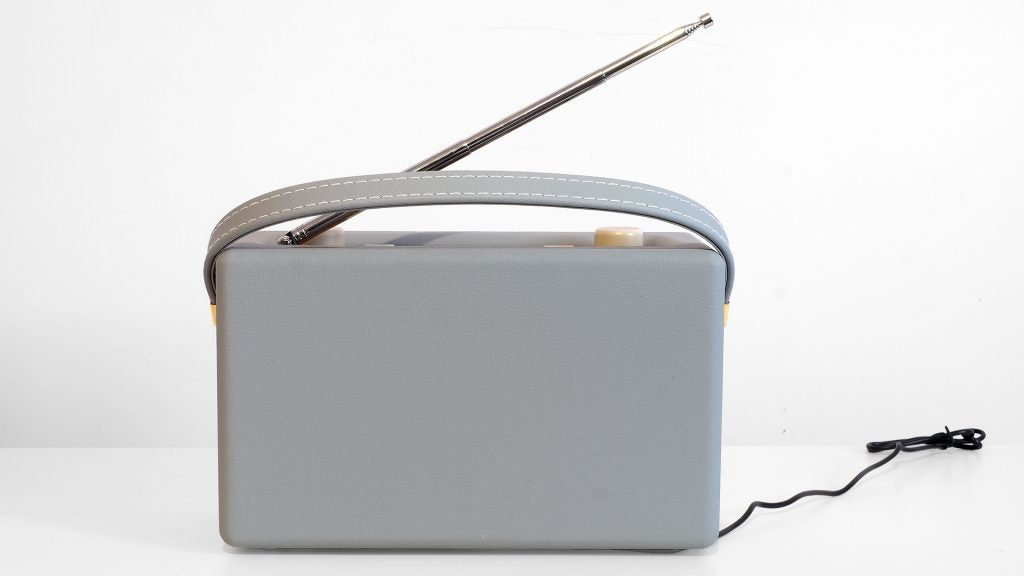 You can currently get the Revival RD70 in six finishes. Ours is Dove Grey, handy for those with grey-walled rooms. Other options include black, cream, “duck egg” blue, red and “leaf”, which is a pastel green.

All look great, there’s not a badly chosen shade among them. This is probably the closest a DAB radio gets to being living room furniture, aside from perhaps the Ruark R1 Mk3.

It is mainly meant for the home, though, despite the carry handle. The Roberts Revival RD70 RD70 can be powered by four AA batteries that slot into its bottom. But in an age when only kids’ toys and TV remotes use non-rechargeable cells, this part of the RD70 feels out of date, not retro.

If you want a high-quality radio with an built-in rechargeable battery, check out the Goodmans Heritage Portable. It’s one of the most pleasant things bearing the Goodmans name in years. 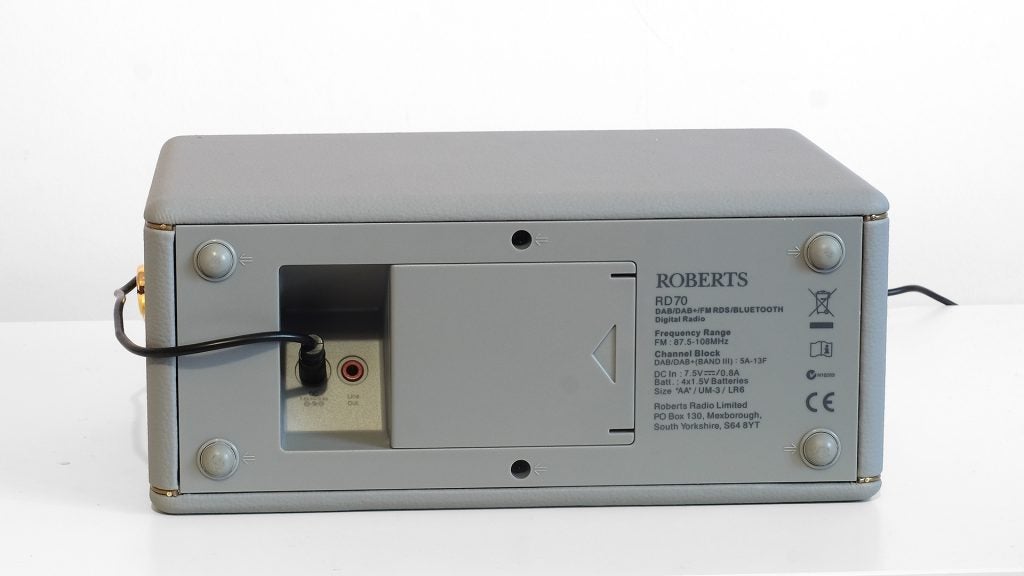 The Revival RD70 is like the Roberts iStream 2, but is has Bluetooth instead of Wi-Fi streaming. Oddly enough, the older iStream 2 is technically more advanced. It has Spotify Connect, multi-room features and internet radio.

The Roberts RD70 does not have these, but Bluetooth often seems simpler. It relays all audio from your phone. You don’t have to rely on an app supporting the radio.

There’s another difference too. The iStream 2 has a blocky monochrome screen. The RD70 has a colour LCD of much higher resolution. 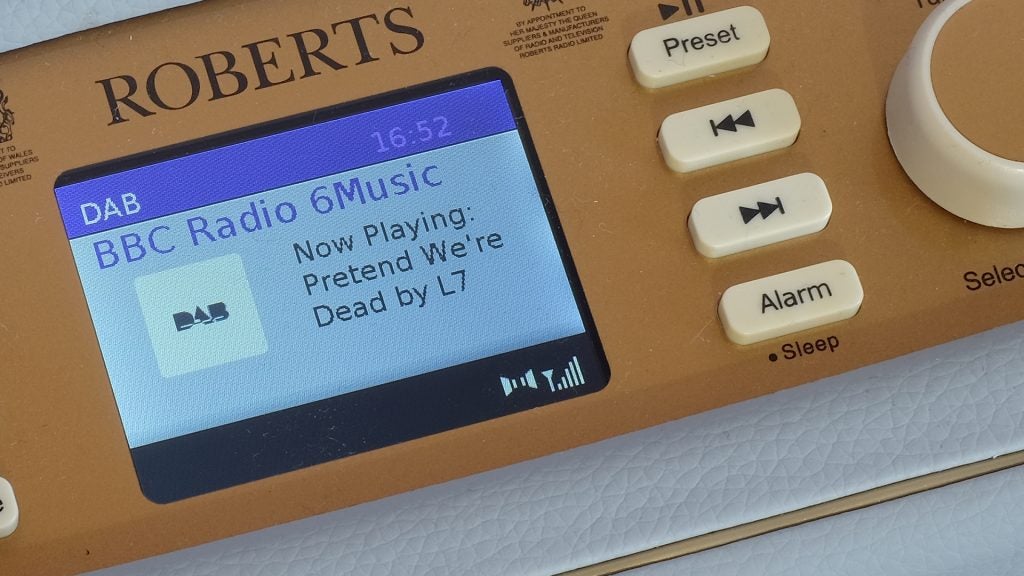 It displays the image thumbnails of the radio station you’re tuned into, or the clock when the box is in standby.

Unlike a Pure Evoke radio, there aren’t dedicated buttons for your favourite few stations, but there is a separate presets button. After pressing this you use one of the knobs to pick the right one on-screen.

Want to switch to Bluetooth? Just press the Mode button and use the other knob to select the source. There’s DAB, Bluetooth, FM and the aux input. A 3.5mm socket on the top plate lets you plug in other non-Bluetooth sources. If you have any left.

The Roberts Revival RD70 RD70 also has a headphone jack, handy if you’re working late in a home office, and a line out on the bottom. Buying for the bedroom? There are two alarms, and the right knob acts as “snooze”. 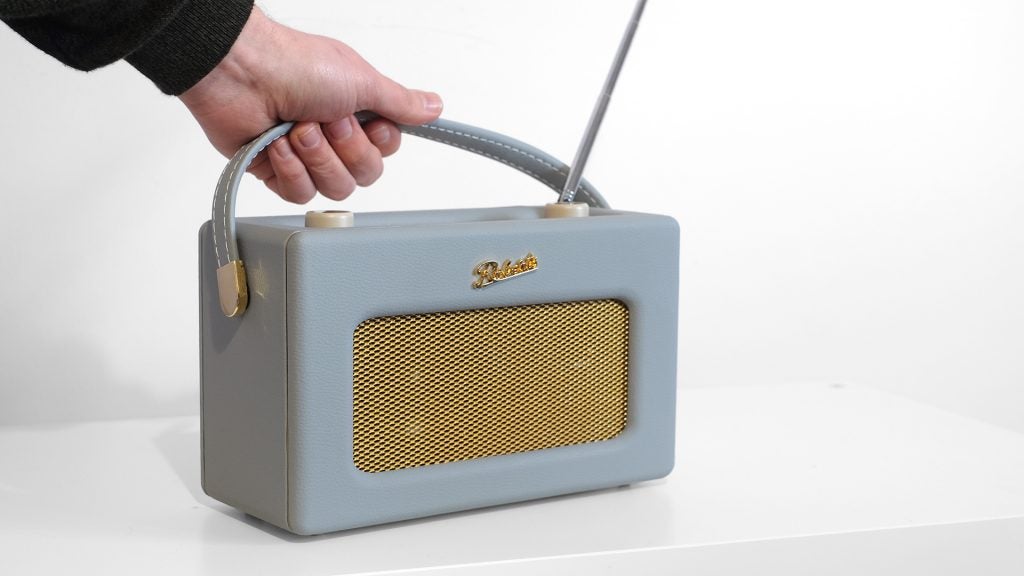 I’ve had a chance to directly compare the Roberts Revival RD70 with some of its key rivals, the Pure Evoke D4 and the Goodmans Heritage Portable. In its role as the sort of radio you might put in a bedroom or kitchen, the Roberts is the best of the three.

It has the most appealing mid tone of the lot, making voice-led stations like BBC Radio 4 sound better.

Like just about every radio that doesn’t have a thin tone, the Revival RD70 benefits from EQ’ing if you listen almost exclusively to spoken radio, though. Fresh out of the box there’s a bit of bass bed that sits under voices. You can EQ this out in the Settings menu if you like. For Revival RD70 owners: I find a -2 or -4 bass setting makes voices cleaner without neutering music. 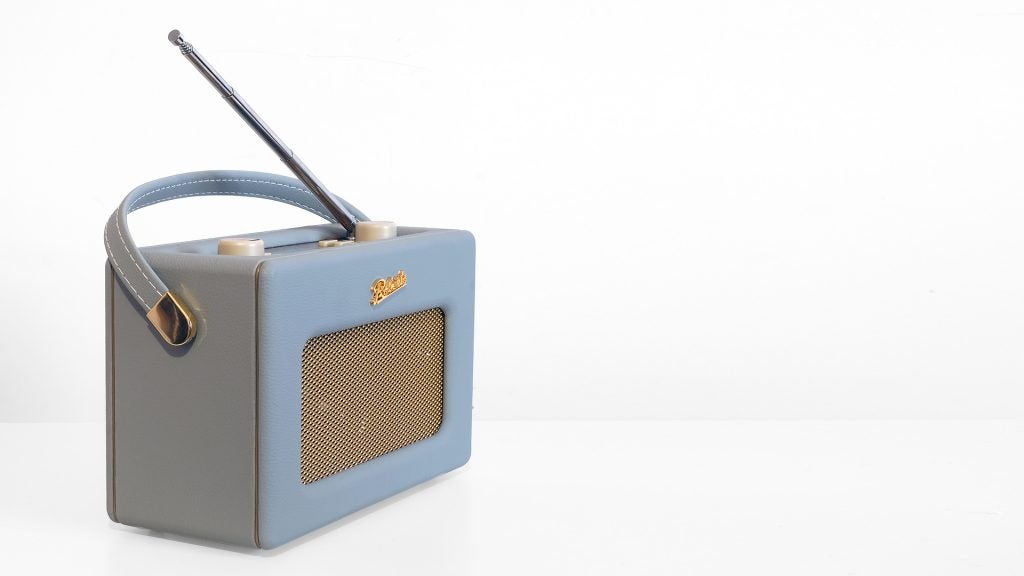 The Roberts Revival RD70 RD70 has a tone that suits its design almost perfectly. It’s slightly dark sounding, not remotely harsh and doesn’t try to hit you over the head with big bass. You might call it “woody”. The Pure Evoke D4 is a lot bassier, and not in a manner that improves the tone.

This is not a party speaker, though. The Goodmans Heritage is better in this respect, which much higher maximum volume, deeper bass and brighter treble. However, the Goodmans isn’t anything like as relaxing a listen, particularly before you tweak its EQ to take the edge off its hot treble.

The Roberts Revival RD70 can fill a 4x3m bedroom with sound easily enough. However, don’t expect the sort of sound-quality-to-size ratio you get with a Sonos One. This radio uses a very traditional single mid-size driver for its sound.

Its scale and dynamics aren’t close to those of £200 speakers that exploit clever tech or advanced enclosure designs. As in other respects, it’s a traditionalist. 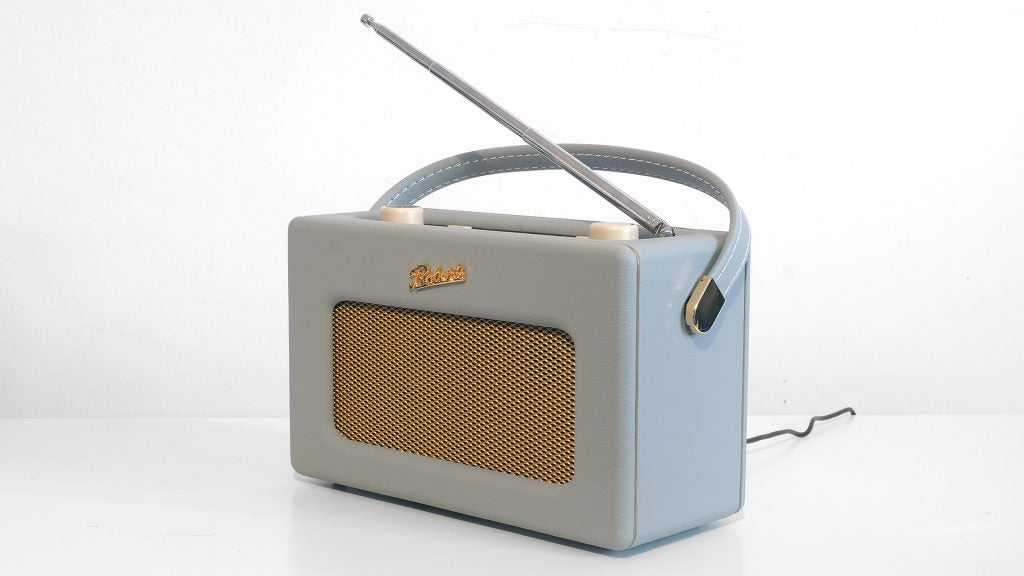 Why buy the Roberts Revival RD70?

With a pure techie hat on, the Roberts Revival RD70 isn’t the kind of product that immediately springs to mind for a recommendation. It’s expensive, the tech is dated and you can get better sound quality elsewhere for the price.

However, it looks great and still sounds better than most other radios in its class. While the world may be excited about AI in our homes, there’s still a lot to be said for a radio you can just turn off and on with the press of a button.

It’s not high-tech, but this charming radio has bags of simple appeal.