I guess I never should have sneared at Matt Damon. The star of the Bourne movies apparently steered clear of any involvement in the Bourne video game because he was more interested in making a Myst-style puzzle game than a shooter. At the time, I thought I couldn’t imagine anything more boring or less suited to the high-octane action of the film trilogy, but now I’m not so sure. It’s not that The Bourne Conspiracy is a disaster, or that it’s been made without any idea about what makes the Bourne films tick. It’s just that we’ve been left with a game that looks good, plays like a reasonably competent action title, but captures little of the ingenuity of the character or the pace and tension of the source material. 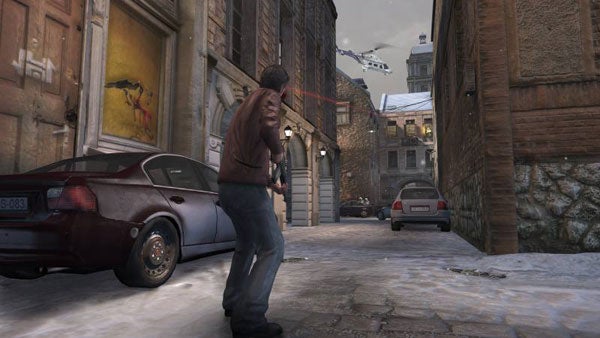 Within the space of the first few levels you can see much of what High Moon Studios has got right, and most of where the team went wrong. Despite having three Bourne books and three Bourne movies to work from, The Bourne Conspiracy concentrates on the events of The Bourne Identity, but slips in additional or reworked material to basically dumb-down and action-up the game. As a result, the aborted assassination attempt on the African dictator Wombosi is now preceded by the equivalent of World War III in the docks of Marseille, while Bourne’s arrival in Switzerland triggers a handy flashback to a hit on a terrorist leader that plays out more like Die Hard 2 than The Bourne Ultimatum. If you were expecting anything in the way of puzzle solving or clever improvisation, think again. The Bourne Conspiracy is linear action all the way, with mindless violence and a body count to match. 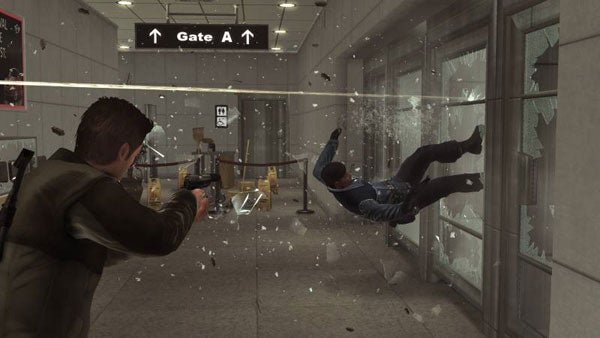 This wouldn’t particularly worry me were the action great; I might even have coped with a Bourne does Solid Snake or Bourne does Splinter Cell adventure. The main problem is that The Bourne Conspiracy has been designed to ape the look and style of the movies at the cost of pretty much everything else. Make no mistake: this is a thoroughly decent looking game. Sure, we get some nobody instead of Matt Damon and those grittily realistic environments could have done with a little more excitement, but the Unreal 3 engine does a fine job of rendering the characters, the animation is smooth and effects like pouring rain and exploding scenery are used quite well. Sudden changes of angle, rapid cutting and a shaky pseudo-handheld camera are used effectively to capture the aggressive, hard-edged style of the films. Watch Bourne in hand-to-hand action against one or more assailants, and it even looks like High Moon has replicated the fighting style of the trilogy. Listen, and the music and the dialogue make the experience even more convincing.

Sadly, these things have an unfortunate payoff when it comes to actually playing the game. Beneath the fast cutting and atmospheric settings, Bourne isn’t actually that fast or responsive character to play. While using his ‘Bourne sense’ will help you find targets or handy ammo caches, a lot of the time the camera and controls seem to be working against you, not for you. Worse, the hand to hand combat is actually pretty basic – just simple combos of fast and heavy attacks which slowly build up an adrenaline meter. Charge it up one level, and you can press a button to dish out a ‘takedown’ attack, whereby Bourne breaks bones, chops away at pressure points or uses objects in the environment to put his foe permanently out of commission. You’re actually very limited as to where you can go, what you can jump on or off of and what you can climb over – if there’s no button-press prompt, you ain’t doing nada. 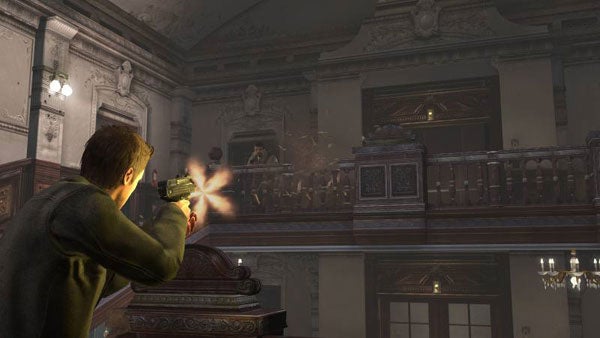 In other words, the really cool stuff you’re seeing isn’t actually happening under player control, and what is happening under player control is actually quite pedestrian. There’s a huge amount of hand to hand combat in this game, and most of it involves holding the block button, taking advantage of gaps in the enemy attack to make your own blows count, then triggering a takedown as soon as it’s offered. It’s dull enough when you’re scrapping with grunt after grunt after ordinary grunt, but when it comes to the tougher boss battles, where you’ll have to earn several takedowns, it’s all just a bit of a slog. Sure, the idea of bashing heads into crates or snapping limbs like twigs sounds cool, and the execution looks cool, but wouldn’t it be even cooler if you actually felt like you were playing some part in it? 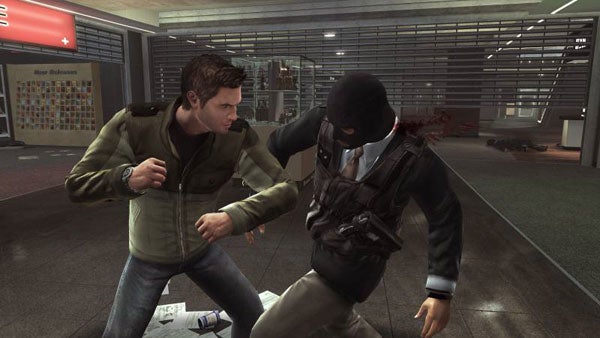 And when you’re not fighting, you’re shooting, and the gunplay is the dictionary definition of average. The Bourne Conspiracy has a basic cover system running, but it’s nowhere near as flexible or responsive as the ones used in Gears of War or Uncharted, and the enemy AI just isn’t that engaging. Weapons seem to lack punch from any sort of distance, and even the basic enemies seem to take two or three shots before they collapse, while the tougher foes can take several head or neck shots before they deem it reasonable to graciously expire. For a game where you’re the ultimate weapon, you don’t half feel strangely impotent.

That’s pretty much the game. You move from one fairly linear area to another, having punch ups with people who – curiously – often appear from nowhere, then having shoot-outs with other people who have now popped into the vicinity. There’s little in the way of sneaking or ‘traversal’ (as game designers like to call jumping and climbing these days) and amazingly Bourne, a man blessed with the skills of a top Parkour athlete, has trouble getting over things like stacked crates, piles of suitcases and barrier ropes. Yes, those same ropes you’ll find outside the doors of cheesy nightclubs are such an impediment to Bourne that he has to find an alternative route through the level. Who would have thought he’d find taking the hook off the post such a challenge? 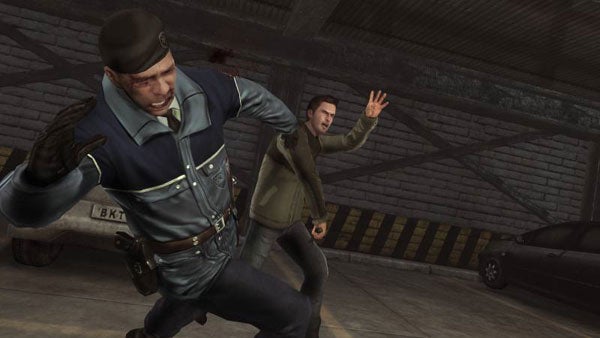 Again, we shouldn’t go overboard with the Bourne-bashing here. The Bourne Conspiracy is at the very least competent, even when it’s at its most uninspired. There are a few levels where it all comes together and you actually feel some excitement creeping in, and if you wait long enough you’ll eventually come across a fine section based on the car chase from the first movie. All the same, this is a game that starts off feeling reasonable, but soon drops to average then mediocre. At its worst, it’s mildly annoying. The early levels are fairly generous (even overly generous) with checkpoints, but later on the flow stems, meaning that a sudden attack or an unforeseen explosion can mean slogging through the previous ten minutes of action all over again. And shouldn’t it be a golden rule by now to always checkpoint before a boss battle? 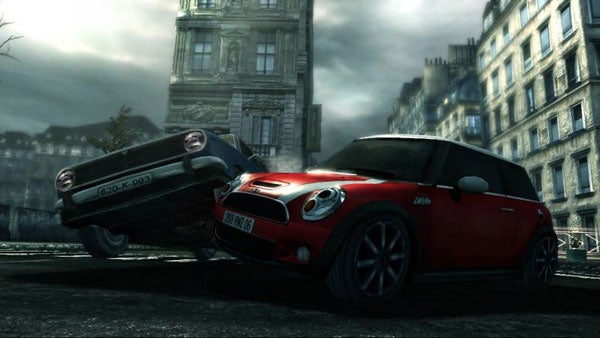 You see? Maybe Matt Damon was right, Maybe a Bourne game where you do what he does in the movies and use your brains and the tools around you to get out of tricky situations would have been more fun than this slightly lobotomized effort. Of course, a little gunplay, fast driving and fisticuffs might not have hurt, but by making the action the sole focus of the game, High Moon has lost the heart and soul of the films. The Bourne Conspiracy is not a bad effort, and it has caught enough elements of the Bourne cinematic style to keep the less discerning Bourne fan happy. All the same, it could have been so much more. To my mind, Bourne deserves better.


A competent action game that captures something of the style of the movies but little of their drama, ingenuity or edginess. Bourne was never boring, The Bourne Conspiracy sometimes is.