There are times aplenty during Robbery Bob 2 where you’ll just want to snap someone’s neck. What makes it even worse is, in the vast majority of cases it’s the neck of an OAP that’ll you’ll be desperate to break in two. If we handed out awards for making you feel like a bad person, Robbery Bob 2 would most definitely be in the running.

Luckily – for the OAPs at least – Robbery Bob 2 gives you no such ability to kill or even injure any of your supposed targets. This is despite decades of stealth games teaching us that the most straightforward path to success is to creep up behind the person you want to bypass and relieve them of their life. In Chillingo’s latest, however, it’s case of simply slipping by unnoticed if you can. In fact, the only person who ever comes to harm is Bob himself, repeatedly thumped with a variety of different instruments by his assailants whenever he’s discovered.

The story behind it is a little strange, however. After being broken out of jail in the original release, Bob is on the run in this sequel, with the game opening as he tries to escape the clutches of the law by crashing a wedding, quite literally. The premise of Robbery Bob 2, therefore, is his attempts to make amends, fearful of getting on the wrong side of the bride’s father, who is one of the city’s most feared mobsters. As such, Bob then attempts to sneak into building after building, attempting to replace all the items he damaged in his wedding crash. Yes, it’s a somewhat convoluted set up, but in the broad scheme of things it’s really not all that important. 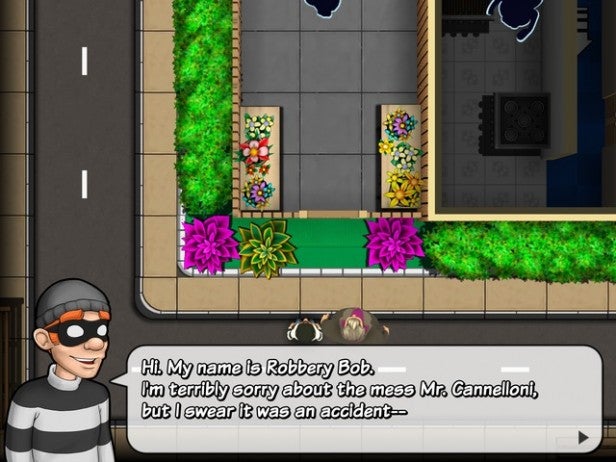 All you need to know is, there are a series of 2D stages you have to sneak around, picking up objects without being spotted and making it out of whatever building you’re asked to infiltrate within a short amount of time. Viewed from above, Bob basically has two tools in his arsenal; the ability to creep very slowly and quietly, and the ability to run rather fast in short bursts. Doing the latter tends to make a lot of noise so has to be used sparingly and, for the most part, successful attempts are a case of tracking the movements of your foe and slipping by unnoticed.

It’s much akin to attempting to navigate your way around a maze. Each room in the building has to be taken one at a time, with there basically being only one way of making it through without being spotted while also picking up the trinkets dotted around each stage – it’s a question of working out just what that way is. Do you need to distract a guard? What will happen if you slam open that door? Is it really worth putting yourself in danger to pick up one extra item? 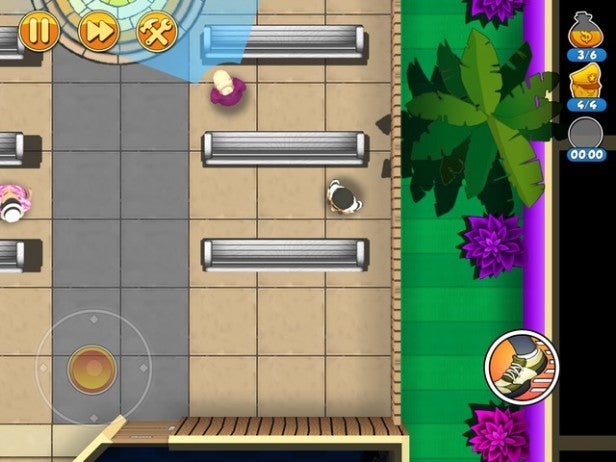 That’s if you want to get a perfect score in each stage, of course. Robbery Bob 2 is one of those games where, if you so choose, you can blitz through it, setting off every alarm and alerting every security guard in each stage if you see fit, as long as you pick up the target object in each level and make it to the exit. There are also a whole host of objects you can pay out for via the game’s shop too that make the game a little easier, and often more entertaining: though you should be able to make it to the end undetected if you’re clever enough, there’s an undoubted appeal to letting off a clockwork mouse in order to distract your nearest foe so you can slip on by, for instance.

However, for those who want all three stars in each and every stage, Robbery Bob 2 is an entirely different beast – one of slow movements, tactical sprints, and tracking people’s movements. It’s stealth at its most pure, and taps into the kind of tactics players would be more used to employing in classics like Metal Gear Solid. It’s because of this, however, that the game’s two mistakes are all the more jarring. 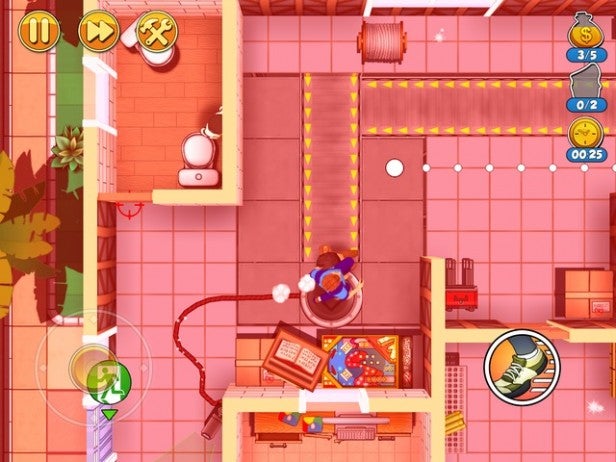 Firstly, the game’s controls feel a little loose. Using virtual buttons and a thumbstick, it’s a fairly common occurrence to find yourself setting off alarms and getting spotted because Bob has decided to take a couple of steps in any direction seemingly of his own accord. It’s by no means a game breaker,  but it’s safe to say you never truly feel like you’re in complete control of his movements.

Equally grating is the game’s look. Robbery Bob 2 is, frankly, a little bit ugly. It’s neither cute and cuddly, nor slick and stealthy. Rather, it all just looks a bit amateur, and the mock Tom & Jerry styling never truly fits in with the gameplay or serves as a draw in its own right. Instead, it just feels a bit odd, combining with the game’s bizarre storyline to undermine what is otherwise a solid effort just a touch.

That aside, Robbery Bob 2 is a more than entertaining stab at the stealth genre that feels like a natural successor to the original release. Don’t be put off by its looks – there is some genuinely deep gameplay to unearth here, without a hint of any neck snapping in sight.

Verdict
Though visually Robbery Bob 2 is a bit of an eyesore and the virtual controls are far from perfect, underneath all this dressing lies a sharp stealth adventure that really sits at odds with the cartoon style approach developer Level Eight has taken to the game’s graphics. Nonetheless, Robbery Bob 2 finds the perfect balance between a game casual players can zip through at leisure and one the more dedicated can slave over.