Only a short few years ago the one box satellite navigation system was something of a novelty. Indeed, when the original TomTom Go appeared it was quite a revolution – small, portable and astonishingly easy to use. Since then many others have rushed to get in on what is now a huge market and the shelves of your local Currys or Halfords are now groaning under the weight of the various GPS systems on offer.


Therefore, each has to offer something unique to stand out from the crowd. The Road Angel Navigator 6000 claims to be two products in one. It aims to combine the best bits from Road Angel’s dedicated speed camera and blackspot database units with a small GPS navigation system. It makes sense to combine the two but does that make it the perfect solution? 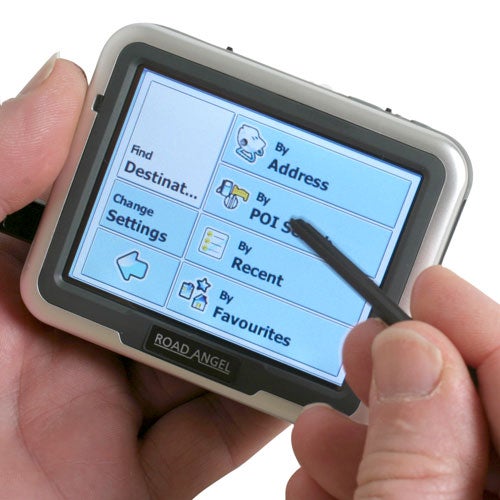 The device itself is as small and light as one could hope for and naturally a car bracket is supplied, which I found quite tricky to plug together compared to others I have used. I also found it tricky to get it to sit an angle that I liked. Once set up you have an in-car charger than plugs into the USB connector on the side. The device isn’t as thin as some of its competitors but it does have the advantage of the battery lasting a decent amount of time – it’s rated at eight hours, and I managed to get nearly seven out of it during my testing so that’s not bad. One thing that disliked about my TomTom Go One was how often it nagged about needing to be plugged in, which meant trailing cables around the car.


The device is Windows CE based so is able to play MP3’s and display photos as well. Why one would want to do this on a GPS device is always a source of bemusement for me, and on the Navigator 6000 it makes less sense than ever – there’s no headphone socket and the screen is quite grainy so it’s not the best way of showing off your snaps.


The menu button at the top also reveals an interface that I could only describe as odd. When you press it you get two small icons – ‘RA Menu’ and ‘Full Screen RA’. Choose the menu and you get a very large icons and arrows to navigate the choices – to make changes you have to press Open, then press ‘Adjust’ and then press ‘Store’, and you then get a confirmation screen. It’s definitely not something you’ll want to do when driving. 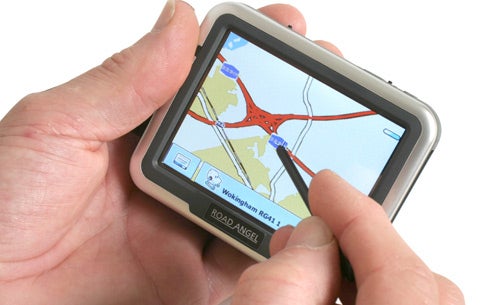 When you fire up the Road Angel button you are confronted with an image of a globe surrounded by satellites with laser beams shooting down. It’s designed to indicate how many satellites you are getting a signal but it’s rather bizarre. You can choose to wait until you’ve got a signal or press the Nav button to go into the navigation interface proper. Overall, my impression of the interface was that it was by no means intuitive or in any way well thought out. I got used to it with practice but I couldn’t say it was fun to use.

On the right hand side is a reset button, which is a tacit admission that the device will crash on occasion. I didn’t experience any total lock ups during testing, but I did get the odd Windows style meaningless error message and you have to press a small, awkward OK button, several times to get rid of the message.

When you first go into the navigation software, you’re treated to a overview of your location from high in the sky, with the map moving down through the clouds and zooming in on your location, until you finally get down to street level. It’s pretty flashy, but the downside is that it takes ages, which isn’t what you want when you just want to get going. 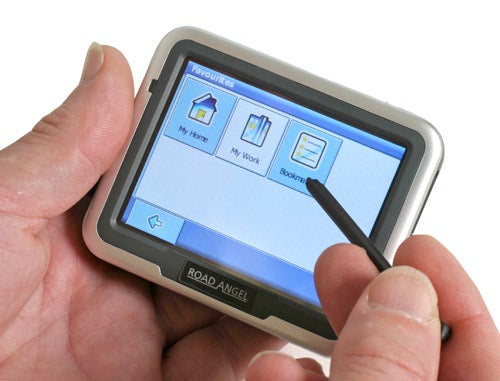 My other bug bear was that it was slow. There was a noticeable lag between pressing the screen and something happening. Again, after prolonged use you take this into account, but I found it frustrating and off putting.


Back at the main screen, you can plan your route by choosing Destination. You then find your destination by putting in the City, Street and number or straight via a Post Code, my preferred method. The device supports full 7-digit postcodes for the UK, which lets you get right to where you need to go. Once you’ve entered this you get a white screen with a very basic bar with the words’ Calculating Route’ across the screen.


Once this is done you get the usual affair of a 2D or 3D map, with an arrow showing the next turning in the top left. Along the bottom, there’s information such as distance to destination, the current time and the expected ETA. If you tap the screen you can naturally, go into a Settings page, and you can also choose an alternative route to take you round obstacles. From a Nearby option, you can go into the Points of Interest Database, which found all my usual locations. 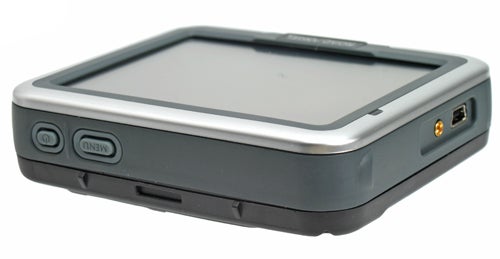 The speed you’re travelling at is shown clearly on the bottom right, which is important in a device like this, which is designed to help you avoid speeding fines. When you do approach a camera you get a warning that flashes at the top, with the speed camera icon and the speed limit. What’s quite irritating though is the harsh beeping sound that it emits repeatedly as you approach the camera. You can change this behaviour by going into those initial menus and telling it to beep once, which is recommended to retain your sanity while driving.

For some reason I wasn’t able to turn of the voice commands, as sometimes I prefer to just use the screen. When you do approach a camera, the voice that informs you of it is no less the Tiff Needell, the presenter of Channel Five’s driving programme, Fifth Gear. Unless you’re some sort of bizarre sort of Tiff Needell groupie, this hopefully isn’t enough to make you go out and buy this Road Angel, though there’s no telling what executing a perfect power slide can do for some people. The device also alerts you when you are approaching an area where accidents are likely to occur, known as blackspots, and also when you are in a school zone. Both do make you pay more attention, but I’m not sure you need a device to make you drive carefully. 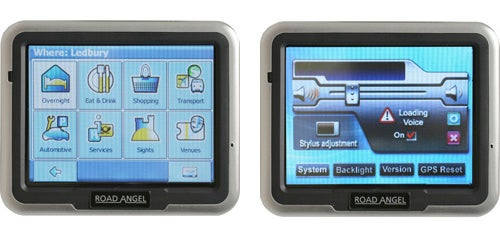 While driving to locations that I was familiar with, such as Home, Work and friends, I found that the Road Angel by default tended to pick routes that I wouldn’t have chosen myself. There is an Alternative Route feature that does work but I didn’t feel comfortable with most of the choices it made. It also had that annoying habit of insisting you turn back and go on its chosen route for far longer than other navigation tools. As a result I found that I wanted to check the route that the Road Angle has chosen, but I couldn’t find a way to do this.


After extended use I found that I did get used to the Road Angel’s foibles but I can’t say that it would be my choice of device. The interface is odd, it’s slow to respond, the routes it chooses are suspect and the manner and frequency of its alerts are grating. 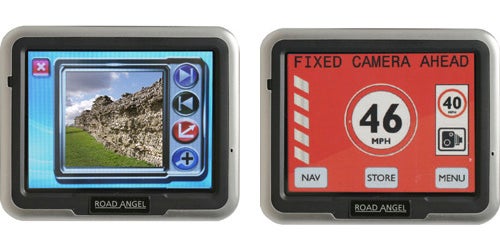 Once again, all I can say is that you’d be better off with a TomTom. You can pick up a TomTom 510 for not much more than the Road Angel, and you can buy a well regarded safety camera database from www.pocketgpsworld.com for £2 a month, while with the Navigator 6000, you only get six months free subscription after which it will cost you £4 a month. With TomTom, you can also subscribe to live traffic information – something that the Road Angel doesn’t offer.


With the Navigator 6000, Road Angel wishes to trades off the reputation of its speed camera database. Certainly the warnings are comprehensive, but the device itself has numerous flaws, with questionable navigation and slow response time being just two of them.