What is the Riva Turbo X?

The Riva Turbo X is a fairly large portable speaker that uses Bluetooth to stream audio from your phone or tablet.

At £250 it’s an expensive gadget, given that you may not have heard of this brand before. However, it’s one of the better-sounding, longest-lasting portable Bluetooth speakers available. 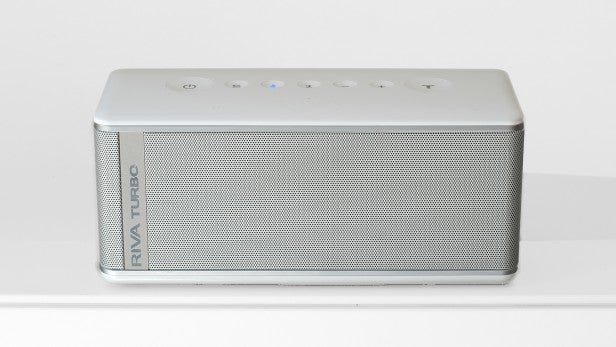 The Riva Turbo X is the big brother of the Riva S, a small Bluetooth speaker we reviewed, and loved, recently. Their features and conceit are the same: this is a simple wireless speaker, not one that has Sonos-like multi-room abilities.

In return, you get a speaker that has a built-in battery, letting you use it freed from the adapter. I’d use a speaker of this size as a home unit rather than one to cart around on holiday, though. I took the Riva Turbo X out for a weekend trip to Brighton during testing, and it sucks up quite a lot of your bag space.

The Riva Turbo X is a pretty fat brick and a lot larger than the Riva S. 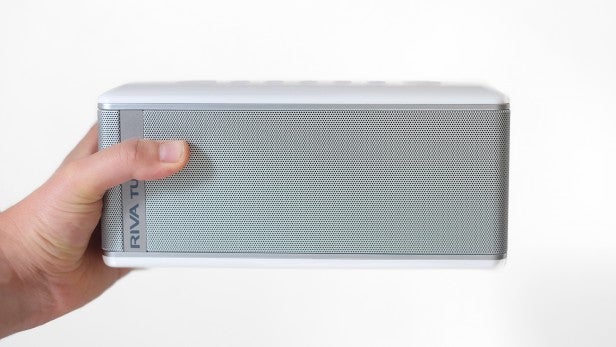 It’s a well-made brick, though. The top and bottom are curved plastic, the sides very rigid aluminium. It’s splash-proof too, although through a slightly clunky mechanism.

On the Riva Turbo X’s bottom are three light blue bits of rubber. Two of them are fixed, standard rubbery feet, the third a bung that can be removed to cover the ports on the back, keeping water out.

The key question is: are you going to remember to put the third in place before the splash happens? 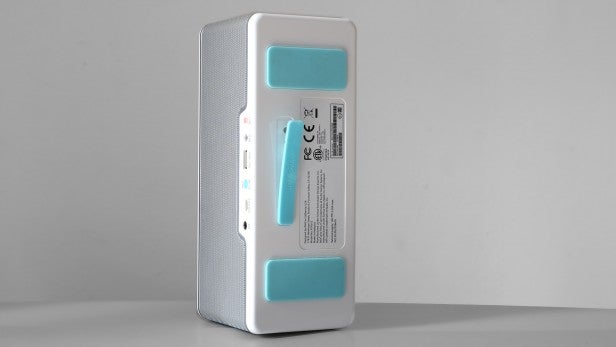 It’s better than having no splash-proofing at all, though. The Riva Turbo X can also take a wired source – there’s even an RCA phono adaptor included – as well as charge other devices using the rear USB port. You get a vague approximation of the battery level through the LED on the back. When it turns red, it’s time to recharge.

Riva says the Turbo X will last for up to a whopping 26 hours between charges. I haven’t had it last that long, but only because I’ve been running the speaker at quite a high, room-filling volume a lot of the time. However, battery life is still excellent and that 26-hour figure is measured at a fair 75dB volume level (probably measured right by the grille). 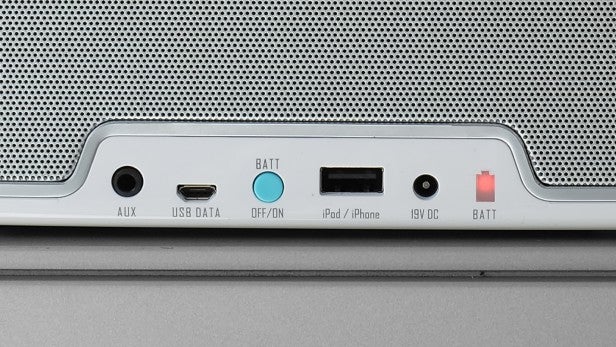 Relatively low maximum volume was my main criticism of the Riva S, and the Turbo X can crank up much louder, to 100dB. This is what the big “T” button on the top is there for – a Turbo mode that increases the max volume.

These top buttons aren’t clicky moving pads but concave capacitive touch panels. The function of most is pretty obvious. There are volume controls, a mute button and a power button. The mystery “S” is a surround mode that subtly tweaks the sound for a wider effect, designed to make TV and movies sound better if you use the Riva Turbo X as a TV speaker-replacer. 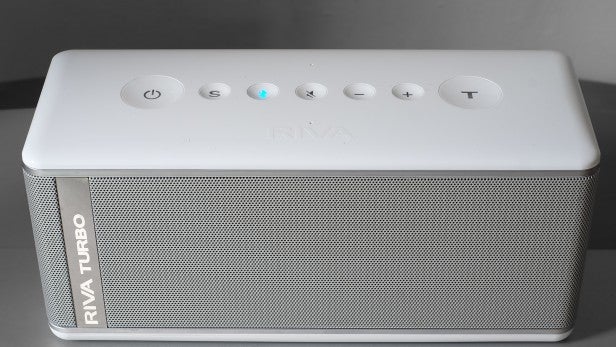 You can also control these features via the Riva X app, but I had some trouble getting it to “see” the speaker even when connected. It’s completely optional and doesn’t seem to add any extra features, though.

The final extra is a microphone with echo cancellation, letting you use the Riva Turbo X as a speakerphone, or as a mic/speaker for your laptop Skype calls. It’s a good-quality mic, as you’d hope given the price. 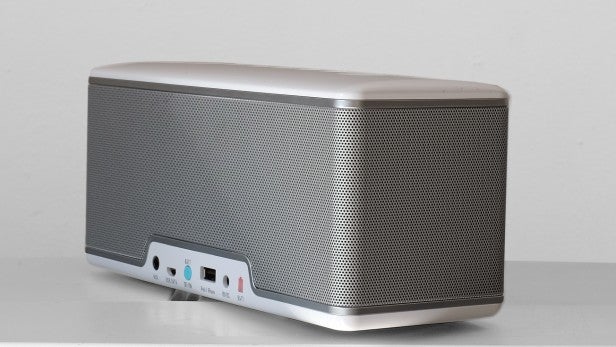 The Riva Turbo X sounds very similar to the Riva S, and that’s a good thing. The big difference is that this bigger box has – quelle surprise – bigger drivers.

It has three 60mm active drivers and four passive radiators, which push bass out of the front and back of the unit.

What it does better than a lot of wireless speakers is to give real weight to the mid-range, the frequency band often neglected by boxes like this. As well as giving vocals a much more life-like presentation, it does wonders for meaty instruments like saxophones and lower-register strings. The sound is full, seems complete. 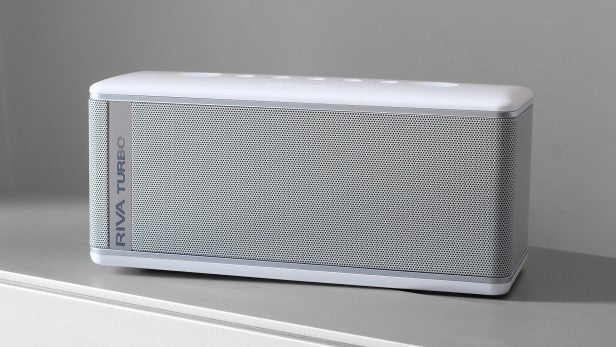 Without the kind of mid-range ballast the Riva Turbo X has, the sounds of these elements can end up having much of their tone and detail delivered through the upper-mids and treble, reducing their power and presence.

The Riva Turbo X has solid, confident bass that’s very well integrated with the mids, but it’s not a bass monster. If you’re after something to get the walls shaking, you can get better results from a non-battery-powered speaker at this price. The Harman Kardon Go + Play sounds bigger and will fill larger rooms too, although its sound has less of that special hi-fi sound balance.

This is a great-sounding and somewhat unusual speaker, in the way that it doesn’t go in for the easy wins of sparky treble or ultra-fun big bass. It also supports Bluetooth aptX for higher-quality streaming from your phone.

However, I’ll admit I was hoping for a little more of an obvious sonic improvement over the Riva S. This speaker sounds similar; it can simply go louder and has slightly greater scale. Ask yourself whether this is going to be worth the extra bulk, which reduces its versatility in a purely practical sense. 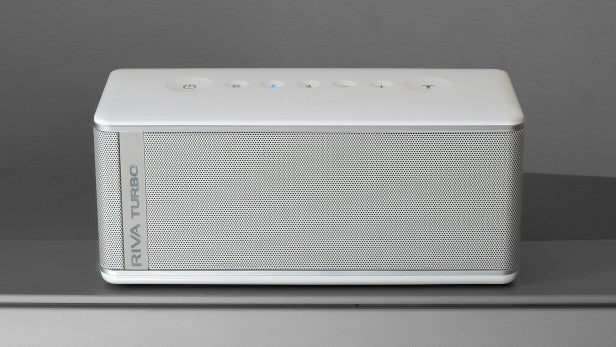 Should you buy the Riva Turbo X?

The Riva Turbo X is a high-quality wireless speaker, a top pick to consider if you want a battery-powered Bluetooth speaker with higher sonic aspirations than most in this field.

It didn’t quite blow us away like the Riva S, though, which set a new standard at its size.

Its larger size loses the Riva Turbo X a handful of portability points, and the two speakers sound fairly similar. However, it’s still one of the best units of its size.

A great-sounding speaker for those who don’t mind spending big on a simple Bluetooth unit.