Available on PS4, PC, Xbox One
Thank goodness for Lara’s 20 year anniversary; without it, Square-Enix would have had to call this new PS4 version of Rise of the Tomb Raider the ‘Sorry You’ve Had to Wait a Year Edition’ or the ‘Finally, The Period of Exclusivity has Ended Edition’. Instead, it’s been able to position it as a sort of bonus edition for PS4 owners, rewarding them for their patience with a nice bunch of juicy extras. On the Xbox One and PC, meanwhile, it works as a Game of the Year Edition, so there’s something good here for everyone who hasn’t already plumped up for the game and DLC.

PS4 gamers have plenty of reason for jubilation, though perhaps a little mild disappointment. This isn’t a huge visual upgrade from the Xbox One original, dragging over new effects or assets from the superior PC version, but a more consistent effort, running at a rock-solid 1080p 30fps with no noticeable input lag and no discernible slowdown. We’re expecting more bells and whistles when the PS4 Pro version receives its patch at launch, but for now, if you’re looking for some kind of Definitive Edition, the PC is still the way to go. 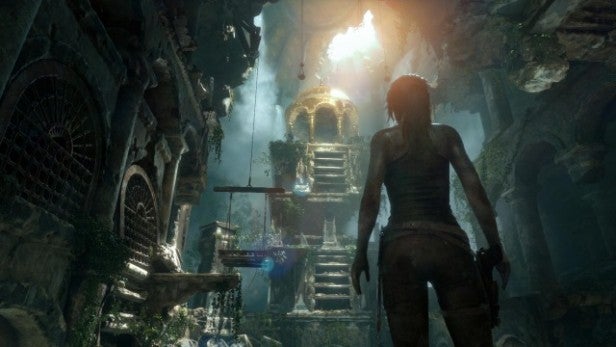 This isn’t a problem. Rise of the Tomb Raider was and is a stunning-looking game; not quite the equal of Naughty Dog’s amazing work on Uncharted 4, but not in a lower league, either. It’s hard to watch Lara in action without being impressed by the details in her animations, her expressions or even the movement of her hair, while Crystal Dynamics knocks out a whole series of scenic locations – some with fantastic water and weather effects – that give you exactly what you’d want from a Tomb Raider in 2016. Like the 2013 reboot it’s a powerful, sometimes visceral, cinematic action game, which works best when you care about its young heroine and feel for her as a tough but not invulnerable human being.

It’s a superb effort, too, lacking a little of the raw grit of the 2013 comeback but making up for it with a greater sense of exploration and adventure, improved stealth and survival action and more honest-to-goodness ancient tombs and mysterious clips to explore. There are still sections where the levels of ultra-violence jar with the way Lars’s portrayed elsewhere, but Rise is generally happier to hit you with tactical challenges or more spectacular action sequences than wave after wave of gun-toting goons. The puzzle-solving aspect still feels like it’s on the back burner, but there’s more and stronger platforming to compensate. 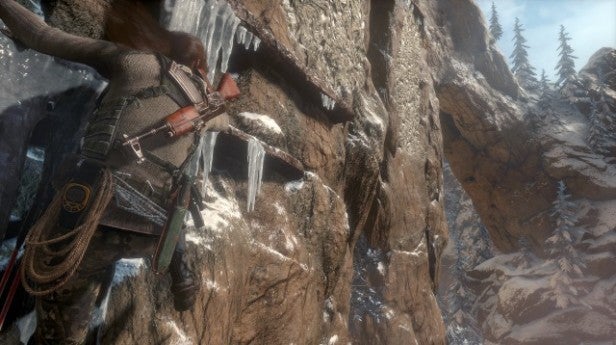 No, Rise of the Tomb Raider isn’t quite as magnificent or immersive as Uncharted 4, but there’s no shame in being one of the best action-adventure games to come along this generation. If you’re looking for thrills, derring do and mystery, Miss Croft still has it where it counts.

Along with the main game, you get all the DLC released so far for the Xbox One and PC versions, including the Baba Yaga: Temple of the Witch and Cold Darkness Awakened packs. None of them feel like an essential part of the core experience, but each takes Rise in a different direction, with Baba Yaga focusing on action, platforming and puzzles while Cold Darkness Awakened has a weird survival horror vibe. Arguably, they work better thrown in here as freebies than as paid for DLC. 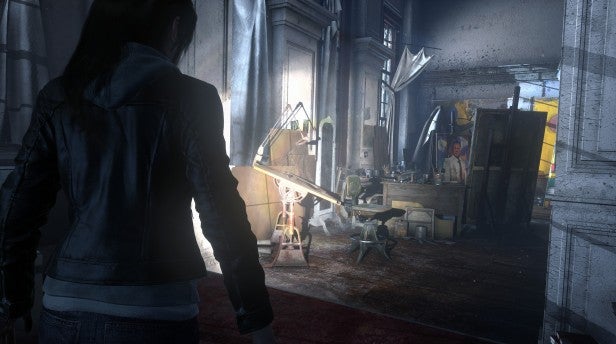 The real treat, though, is a set of new costumes and skins giving you classic Lara looks and models, plus two substantial new additions and an enhanced Endurance mode. First, we get a new story chapter, Blood Ties, fitting in between Lara’s Syrian escapades and her arrival in Siberia. Set in Croft Manor, it has you looking into the fate of Lara’s mother, using clues and objects secreted around the manor to access hidden areas and unlock the central mystery. We previously previewed it as a PlayStation VR showcase, but it’s still very enjoyable played on a screen from a third-person viewpoint. It’s more like an old-school graphical adventure than an action game, albeit one with some pretty heavy steering in the right direction.

There’s no need to worry about missing a detail on an object or failing to recognise a document’s significance when the game alerts you that the former may need further examination or the latter points towards the solution of a specific puzzle. All the same, it makes for an entertaining hour or so of play, while the use of diary entries and voice recordings – how many tape recorders did the Crofts have lying around? – makes Lara feel an even more rounded character. 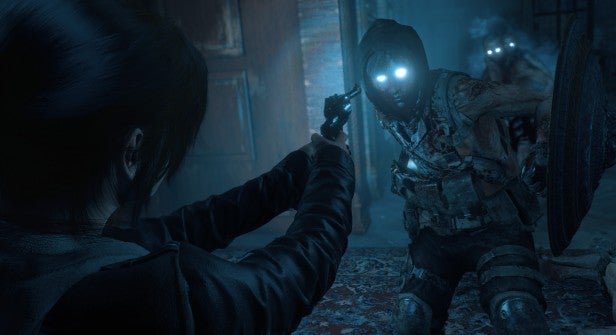 Crack Blood Ties, and you’ll be all the more ready to tackle Lara’s Nightmare: a Tomb Raider spin on the much-loved zombie challenge mode. In Lara’s spectacularly nasty dreams, glowing-eyed ghouls have invaded Croft Manor, urged on by three screaming skulls. Blast the ghouls, slay the skulls and you kick off a final boss battle, but you’ll need to spend a lot of time dodging and scrabbling for small quantities of ammo on the way.

It’s a fun, if lightweight challenge mode, neatly tied into the main game through the game-modifying Expedition Cards you can collect both here and in the main campaign. These enable you to start with certain weapons or equipment, while you can escalate the difficulty – and earn more points – through add-on challenges. If you’re the sort of gamer who loves competing with your friends for leaderboard positions, Lara’s Nightmare should keep you busy for a while. 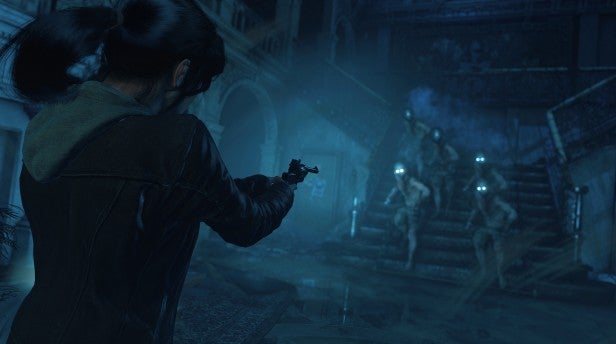 But while both the Croft Manor modes are great, it’s probably the revised Endurance mode that will keep players coming back once the campaigns are over. Previously playable solo, but now inco-op, it sees Lara dropped into the freezing Siberian forest, patrolled by Trinity forces and growing colder or hungrier by the second. You can prolong your life by collecting firewood and hunting the local fauna, but your only hope of escape is to light a signal fire, which will call in a helicopter rescue.

It’s a survival mode, but there’s a little more to it than that. For one thing, you will encounter hostile varmints and Trinity soldiers, so it helps if you’ve mastered the stealth and combat mechanics from the main campaign. For another, you’re scored on how long you survive and on what you discover while you’re out there, including underground crypts and the valuable artefacts they contain. As in most survival games, death is final, making for a very tense and exciting mode. Do you call in the ‘copter at first sight of a signal fire or risk death from cold, starvation or violent causes while you continue searching for lost relics? The choice is yours. 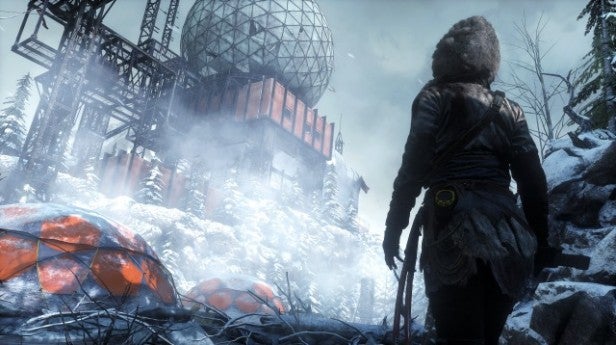 Now, I’m not generally a big fan of survival games, but something about Endurance clicks. It’s partly that it relies on some already effective, well-established game mechanics, but also because the environment is so immersive; the constant snowfall, mist and loss of visibility, not to mention the eerie wilderness sound effects, make it really compelling. Of course, it’s an absolute bastard when you fall into an underground spike trap or get hunted down by wolves after an hour of play, but this only encourages you to pay more attention and think before you move. The random nature of the landscapes can make it feel impossible, but when the main adventure’s over it’ll be Endurance that keeps you coming back for more.

Verdict
The PS4 version isn’t quite the definitive edition, but the smoother frame rate and more responsive gameplay makes a great Tomb Raider even greater. The new Blood Ties mode is an interesting adventure that gives us time to go deeper into Lara’s back story, while the Lara’s Nightmare mode is a fun, fast-paced action challenge. Throw in the other extras and the enhanced, co-op friendly Endurance mode and you have a package to make the wait worthwhile. Sometimes being the second-best adventure of the year is more than good enough.