With BlackBerry’s Storm reportedly racking up over 100,000 pre-orders in the UK you could be forgiven for overlooking this model, the company’s first flip phone, but that would be a mistake as the 8220 has plenty to offer those who aren’t ready or willing to make the leap to a touch-screen device.


The 8220 owes its existence to America’s love affair with the flip format. BlackBerry reckons that there are many in the US who simply won’t buy a phone unless it has a flip design, so it simply had to create a model to cater for these refuseniks. We’re not so flip obsessed in the Europe, but heh, more choice is never really a bad thing so we’re not going to complain. 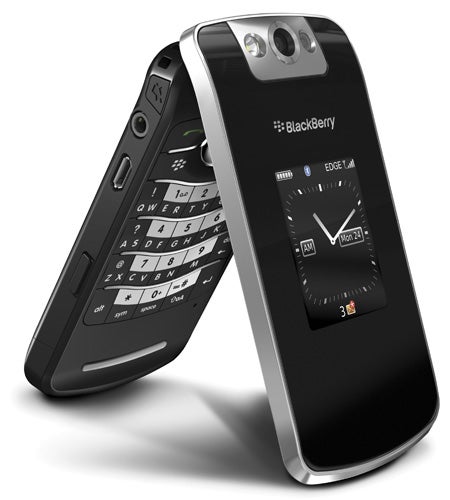 With the flip closed the phone is the most compact in the BlackBerry range, but when open it looks taller than Yao Ming. Measuring a full 18cm from head to toe, it initially feels a little bit large when you’ve got it up to your ear during calls, but you soon get used to it. From the front the finish looks pretty classy thanks to the glossy black paint job and chrome trim around the edge. Unfortunately this hasn’t been carried over to the rear. Instead you get a cheap plastic battery cover that looks and feels quite flimsy.


Opening up the phone, things improve as the hybrid keyboard is surprisingly large and actually has much bigger buttons than those on the Pearl 81xx series. It takes a while to get used to the two-letters-per-key layout, but once mastered you’ll find you’re able to tap out even long and complex emails at a decent speed.

The screen is also very good. It isn’t the biggest around, but it’s very bright and graphics look quite crisp and sharp thanks to its 240 x 320 resolution. There’s also a smaller external screen, which BlackBerry has made good use of. For example, when an email is received a large envelope icon is first displayed before the display swaps to show a preview of the contents of the message. Similarly, in music mode it’s used to show album art and the name of the currently playing song.


The 8220 uses BlackBerry’s latest V4.6 operating system, which has a redesigned interface with a cleaner and simpler layout. On the whole the new interface is a big step forward, but there’s still room for improvement. Although the new icons look great, it’s not always obvious what they relate too. There are also too many textual menus dotted around the place for our liking, but with time we’re sure BlackBerry will improve on this.

Of course, the main reason people opt for a BlackBerry phone is because of their email prowess. Thankfully, in this regard the 8220 doesn’t let the side down. We used the phone with our personal email account and getting everything up and running was a doddle. You just enter the email address and password using the configuration tool on the BlackBerry site and then wait around 20 minutes for the service to activate itself.


One advantage of the new software is that HTML mail is now fully supported. In fact, the 8220 rather neatly reformats incoming HTML mails so they fit the width of the screen eliminating the need for any horizontal scrolling. BlackBerry has also added support for instant messaging services including Gtalk, AOL, MSN, Yahoo and ICQ, so keeping in touch certainly isn’t going to be a problem. 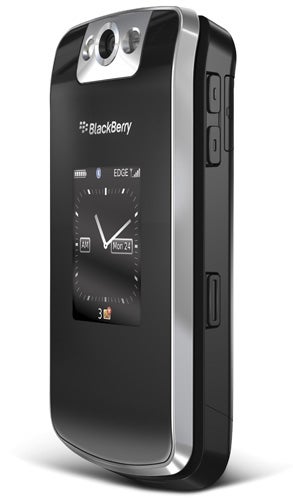 But while the messaging features are excellent, the phone’s browser is a bit of a disappointment as it seems to be rather buggy. Loading pages even over Wi-Fi can sometimes take an age as the phone struggles to decide what to do with the incoming data. Also, there were times when having the browser open in the background slowed the rest of the phone’s functions to a crawl. It’s a shame, as when the browser does work properly it does a good job of rendering pages on the screen, although in terms of usability it’s a long way from the iPhone’s Safari. Nevertheless, we hope BlackBerry can sort out these problems in a future software release.


Naturally, as this model is aimed at consumers BlackBerry has kitted it out with a camera, albeit a fairly basic one. It captures 2-megapixel snaps and has an LED flash for shedding a bit of light on proceedings when you’re taking picture in low light. Apart from the LED flash the only other features on offer are 5x digital zoom and the ability to set white balance. The shots are the usual passable cameraphone affairs. Pictures taken outside in good sunlight don’t look too bad, but in darker conditions even with the flash turned on the results are marred by lots of digital noise.

With the improved OS comes an upgraded music player. You can browse tracks by the usual artist, song title or album name categories and the Now Playing screen displays Album Art if it’s available. Music can be transferred to the phone using either BlackBerry’s own software, which isn’t all that hot, or alternatively you can just rely on either Windows Media Player’s sync feature or drag and drop via Windows Explorer. The sound quality is surprisingly good although it’s disappointing that there are no EQ features at all, not even a list of presets.


BlackBerry supplies the phone with a pair of decent stereo headphones complete with an in-line mic for handset-free calling. The phone also has a standard 3.5mm headphone jack so you can swap these for your own headphones if you want, but as the hands-free set isn’t a two-part design, you’ll loose the hands-free calling capability. Another option is to opt for a stereo Bluetooth headset as the phone supports A2DP so it can stream stereo sound to a compatible headset. 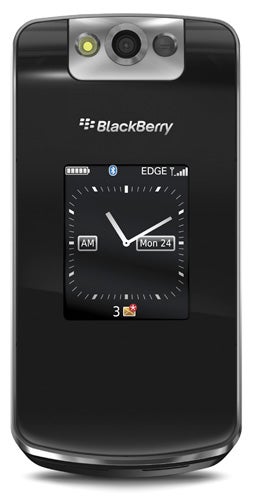 Call quality was consistently excellent during our test period and the phone does a great job of holding on to reception even in weaker signal areas. BlackBerry’s handsets have a reputation for excellent battery life and thankfully the 8220 doesn’t sully this good name. With medium to heavy usage for phone calls, emailing, web access via Wi-Fi and music listening via A2DP we got around three days out of it, which is very impressive.


Despite this there is one serious omission on the 8220 – its lack of 3G support. While it’s not all that much of an issue for emailing, it is a problem when you’re using the browser on the move. The browser is already quite slow when working over Wi-Fi, so as you can image waiting for pages to load over EDGE is a bit like watching paint dry.


On the whole, BlackBerry has done a fine job of squeezing its emailer concept into a flip design. The keyboard is good, the screen is impressive and battery life is top class. It’s only the sluggish browser and lack of 3G support that blot its copy book somewhat.