With a very particular visual style that bleeds neon, Rifter looks to set itself aside from so many other platformers. The graphics almost pulsate from the screen while the avatar blazes past the scenery at high speed and it’s all backed up by a synth inspired soundtrack which beats and kicks, percussed with blasts of sound effects ripped from a sci-fi space-age future. Playing as a Rifter, guided by a sprite called Tiny who harks back to Navi from Ocarina of Time, the game tasks you with destroying planets by traversing levels with a grappling hook and toppling the tower at the end of each section.

Tiny spends so much time chirping about techniques at first, slowly evolving into a more pressing voice which raises questions about how the avatar is being guided. There’s a story being deftly woven throughout the fast-paced levels, bolstered by side characters who bring new views on the plot while introducing extra mechanics, including some devilish bonus levels.

When Rifter opens, a choice of several control styles is presented. Keyboard and mouse allow for a little more precision over aiming the grappling hook, but an option for controller support is there for those who lack confidence on a keyboard. Rifter feels a little more intuitive on controllers, as the left stick controls movement of the avatar and the right stick is flicked in the direction of floating nodes for the aforementioned hook. 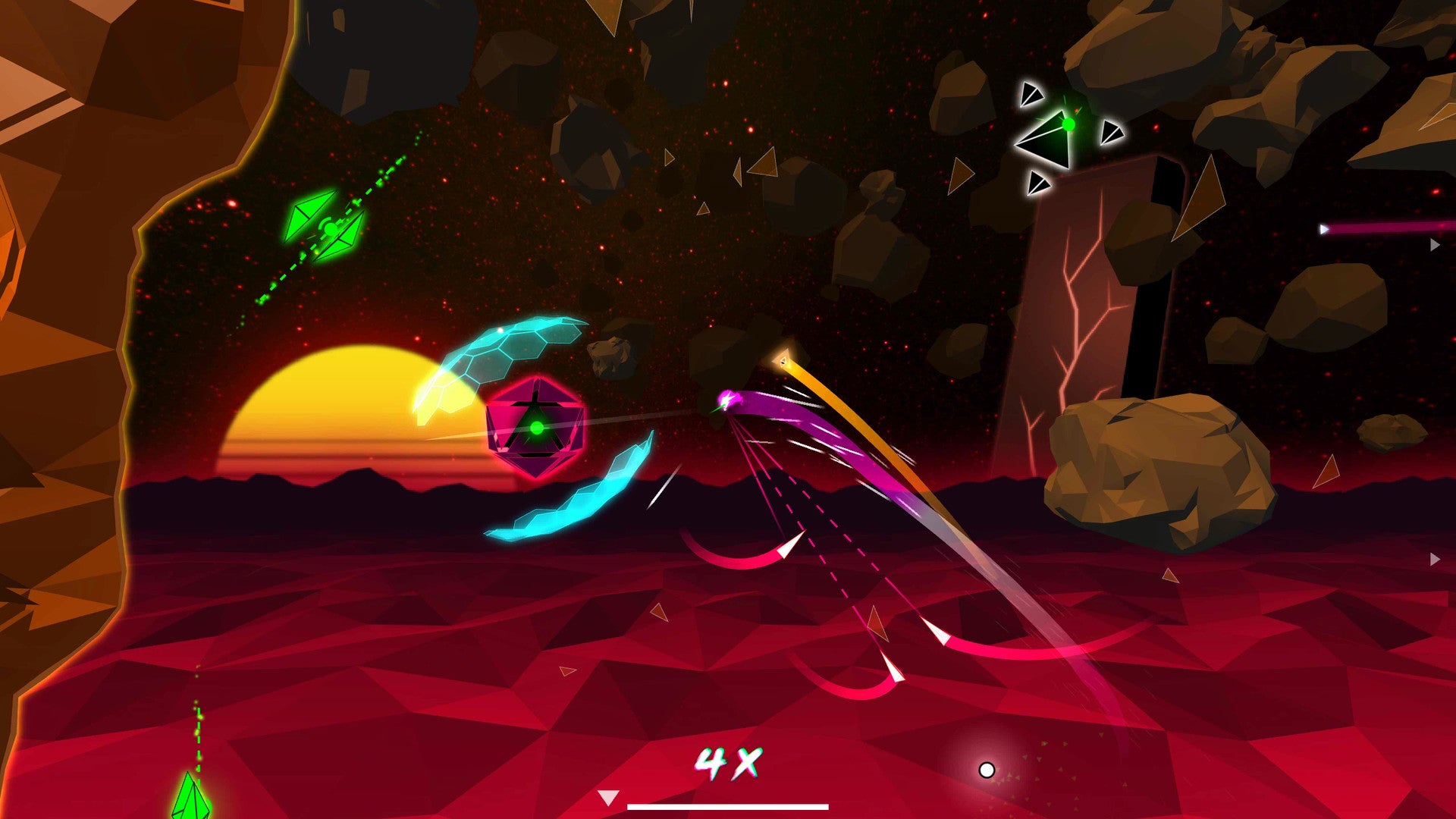 When the hook grabs onto a node, the game shifts and becomes more about momentum. Swinging back and forth on the left stick sees our hero rock sideways, building speed. Release the right stick to watch as they tumble through the air to further platforms or nodes. Or, as the jump falls, flick the right stick back and use the boost of speed to gain more distance or height. Turning the avatar into a pendulum at first feels awkward, but eventually becomes a thing of joy. Successful grapples, changes of direction and launches into secret areas soon feel natural and create the biggest grins of pride.

While the game focuses on speed of movement, utilising timers seemingly created for speedrunners, the option to take time doesn’t penalise if you prefer exploration. Heading off the obvious path rewards shards of different colours which act as currency to improve the Rifter’s performance. It may be higher jumps, extra speed or even the ability to skip across bodies of water rather than sink and drown. If death does come, a quick restart is always available and the game is never unfair. Each death will fall back to a need to practice movement, rather than unfair enemies.

There are indeed enemies within levels and they vary from plant-like tentacles to crafts akin to rocket ships. All have a weak spot which must be attacked by flicking the right stick towards it. Rather than grappling, the Rifter will slice at the enemy. Of course, you’ll also have to watch out for environmental dangers too, it’s not just water that kills you, but mines that drift towards the Rifter’s movements or electrified surfaces. Each will pick away at the health metre until it runs out and the level needs to be restarted.

As the game steadily progresses, new skills will be unleashed. A dash jump soon appears and allows for mid-air traversal which aids the score combo that ticks away in the corner, but is only really important if you want to chase high scores. The same can be said for the end of level ratings, from A to F, they don’t really impact the game, but add on an extra level of depth. 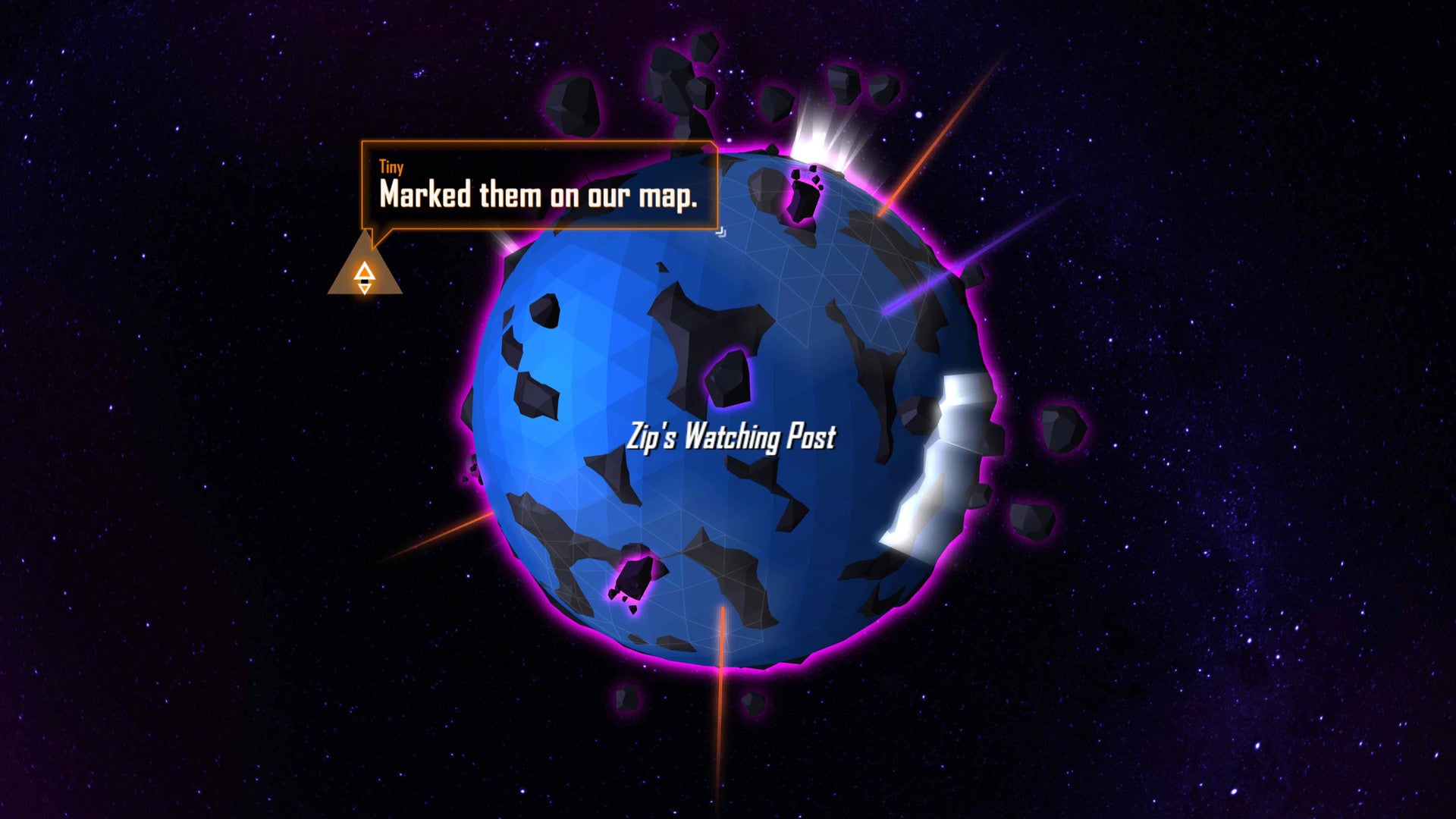 Rifter is a very unassuming game, that hides a surprisingly touching story beneath a glaring visual style that kindly assaults the eyes with neon, sparks, explosions and trails of colour from the Rifter spinning in the air. Each character, while simplistic in looks, is bursting with a personality which comes from genuinely funny writing and charisma. Each planet uses gaming tropes to differentiate themselves, bring ice and other elements into play and all look sharp and bold.

It’s a challenging game; one that requires patience and plenty of practice. At times, some grinding is needed to find those extra shards that will grant a new skill. While these aren’t needed for progression, they will certainly help players who are finding the latter stages a struggle. For example, there’s a skill to purchase which makes the Rifter grab ledges, meaning close shave jumps will still count, rather than see the hero plunge to their death or restart a section.

Small gripes crop up occasionally with the grappling hook as it misses the target node even though you could swear you aimed at the right spot and after a while, the soundtrack begins to repeat, which isn’t necessarily a bad thing, but it highlights a limited selection of tracks. When repeating levels often, you’ll hear a lot of repetition. And in the bonus stages, restarts are constant as you’re tasked with juggling skills, grapples, jumps and mid-air dodging of hazards.

These don’t stop Rifter being a standout game, not only in aesthetics but in the feel of motion. When the flips, jumps and grapples all come together, there’s a rush of adrenaline. And it’s all raised by that bouncing soundtrack and disco visual style. Precision platforming is currently hot and Rifter will easily step into the shoes left behind by Meat Boy and Celeste.