In its early days, Sony’s PSN Store was often compared unkindly to Microsoft’s Xbox Live Arcade service – and not without good reason. Live Arcade launched with storming arcade hits like Geometry Wars: Retro Evolved and such casual favourites as Hexic HD and Bejeweled 2. Ever since, it has dished out a steady diet of retro classics, remakes and classy original titles. Bar notable exceptions like Gran Turismo HD, Tekken: Dark Resurrection and Super Stardust HD, the PSN Store has not been so successful. However, in the last few months things have begun to turn around. With games like the great PixelJunk Monsters, Sony has proved that it can dish out games to match anything you’ll find on Live Arcade. 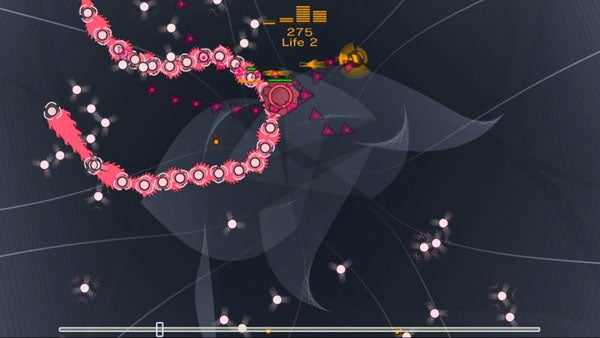 Riff: Everyday Shooter is a case in point. Having launched four months ago on the US and Japanese PSN Stores, it’s a bit of a case of ‘better late than never’ over here, but at least the wait was worth it. If you have a PS3 and you like old-fashioned shoot-em-ups I’d suggest you stop reading and download it right now. Trust me. It will be the best £5 you’ve ever spent. 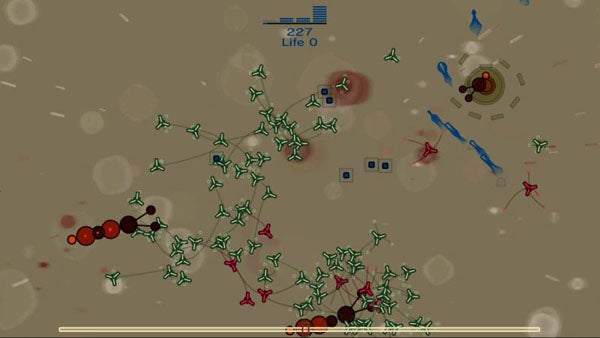 Still here? Perhaps you need convincing. Well, think of Riff as the love-child of Geometry Wars, Rez HD and the cult-classic ‘shmups’ of Kenta Cho (as discussed in more detail here. The game’s developer, Jonathan Mak, has described it as ‘an album of games exploring the expressive power of abstract shooters.’ Now, that might sound slightly pretentious, but within a few hours of play you’ll think it’s right on the nose. 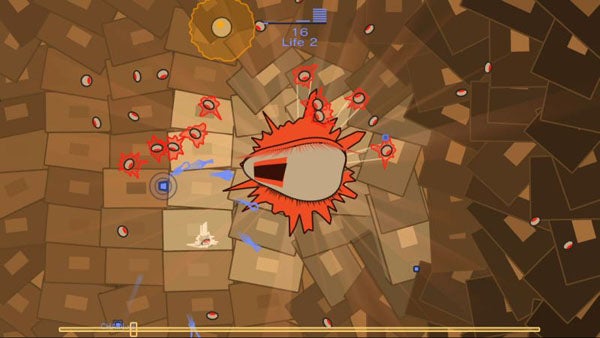 It’s an album, because it’s structured like one. Its eight levels are all variations on the classic top-down shooter. As in Geometry Wars, the left-stick moves your tiny craft while the right stick (or the four face buttons) streams a hail of bullets in the selected direction, and you need to master both in order to dodge the constant swarms of enemies headed in your direction. However, each level has its own visual theme, its own distinct rules, its own specific enemies and – crucially – its own soundtrack. Why crucially? Well, the level lasts only as long as the background music before fading onto the next. Your principle task, therefore, is merely to survive each level long enough to see it out.

Intelligently, the game gives you basic onscreen instructions during the first level, but in the levels after that it’s up to you to work out the new rules for yourself. On the first try, you probably won’t get them. There are always enemies to shoot, and shooting some of these enemies may or may not leave you with a glowing or pulsing dot to collect (more on these later). However, there’s also usually some way of causing a chain of destruction that can clear large portions of the screen (and net you a lot of dots) if only you can work it out. The second time you reach a new level a bit of experimentation will probably give you some more idea of what to do, and after the third or fourth time it’s just a case of doing it. With dozens of enemies and an inordinate quantity of bullets knocking around the screen at any time, this can be harder than it sounds. Luckily your ship is extremely agile, particularly if you bear in mind that it moves faster when you’re not firing. 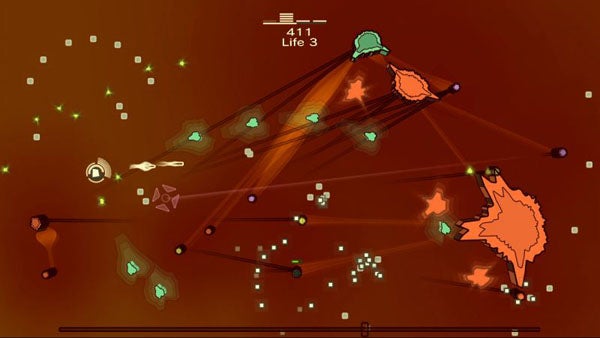 Taken on its own, each Riff level is an elegantly constructed little shooter, full of clever mechanics and a great mix of memorable patterns you can work with, and random elements that keep it unpredictable and interesting. As a result, the game is immensely enjoyable and hideously addictive. However, while Riff kicks off with a fairly gentle learning curve, it does get tricky once you’re on the third stage and beyond. As you have to go through each level in turn in the main single-player game, this might be a drawback for those of us who aren’t hardcore shoot-em-up fanatics. 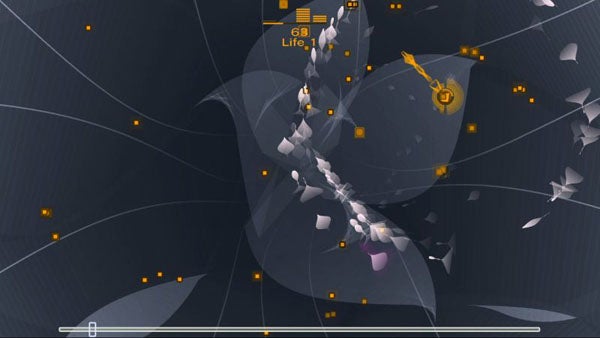 Luckily, the game has an elegant solution built in. Remember those dots you collect? Well, at the end of each game all the dots collected are added to a central running total, and from there they can be used as credits to buy additional lives, taking your starting total from 2 to 3 to 4 if necessary. Collect 200 or 700 dots in-game and you’ll also be rewarded with an extra life. What’s more, lives aren’t all you can buy with the dots. You can unlock particular levels as ‘singles’, giving you the chance to play and practice them without having to work through their predecessors first. Once that’s done, you can also unlock shuffle mode, so that the game shuffles your available levels each time you play. As a result, Riff is satisfyingly tough but also quite welcoming provided you’re prepared to play enough to meet it halfway. On top of this, dots can also be spent on new colour treatments and visual effects – a bit like the optional visual schemes in Rez.

I think we’ve covered the ‘album’ and ‘shooter’ aspects, but what about the ‘expressive power’ and ‘abstract’ bits of Mak’s description? Well, like Rez or Geometry Wars, Riff doesn’t go in for realistic graphics. Instead, it opts for simple geometric shapes, glowing vectors, swathes of neon and weird imagery. On a big HD screen the effect is mesmerizing – to the extent that it’s hard to complain if, on occasion, the confusion results in your untimely death. That’s not all, however. As in Rez or Lumines, the sound effects are all constructed so that they blend into and add to the background music. The guitar-based themes – hence the Riff of the title- play a major part in defining the atmosphere of each level, running the gamut from crunchy rock sounds to finger-picked, folky melodies. Somehow, the way your blasting interacts with the music and the visuals enhances the pleasure of playing the game. 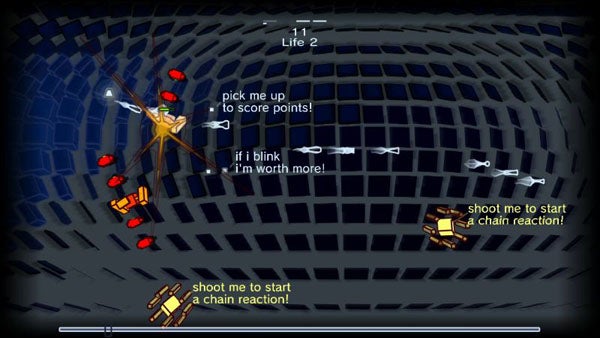 Bringing it all together – the visuals, the music and the gameplay – is what Riff does so superbly. Play it on a big screen with either headphones or a good sound system turned up high and the cumulative effect really is oddly powerful. The game engages your reflexes and your senses but also – in some weird way – your emotions. Maybe it’s nostalgia, because there’s something about this game that reminds me of the days when I wasn’t worried about photorealistic grass or HDR lighting or facial animation systems or believable real-world physics – good as all these things are. Instead, I was perfectly happy just enjoying the simple fierce joy of dodging certain death and kicking alien booty. That’s the beauty of this Everyday Shooter, in all its retro-modern loveliness – it’s the kind of game that reminds you why you got into games in the first place. Needless to say, it comes highly recommended.


A dazzling collection of retro shoot-em-ups bound together with an ingenious structure, good music and hypnotic visuals. Unmissable, particularly given the low price.