The Ricoh WG-6's price means it's stuck in a no man's land between its premium and affordable rivals. It can't match the Olympus TG-6 for all-round features and manual control, but it's also a lot more expensive than the Fujifilm XP140. Fans of close-up photography might be tempted by the unique macro light function, but will be disappointed by this mode's 3-megapixel photo restriction. There are some improvements compared to its WG-5 predecessor (higher resolution sensor, better screen and 4K video), but there are also some pretty big omissions (optical image stabilisation, built-in Wi-Fi). If you’re a particular fan of the Ricoh brand, you might be drawn towards the WG-6, but otherwise the Olympus TG-6 and Fujifilm XP140 are better options at either end of the price tag scale.

Ricoh’s rugged cameras have survived for many years now in the increasingly tough compact camera space – in fact, if you include their Pentax predecessors, the WG range can be traced all the way back to the Optio WPi in 2006.

So have they evolved into kings of the tough cam jungle? The WG-6, which sits above the WG-60 as Ricoh’s premium waterproof camera, is certainly a decent specimen on paper. It features a 20-megapixel, 1/2.3-inch sensor and a range of tough guy credentials, including 20-metre waterproofing, plus the promise of being crushproof, dustproof and freezeproof. It also has a unique LED ring around the lens for macro shooting.

Then again, many of today’s smartphones offer milder forms of waterproofing, and the WG-6 has big competition on either side of its price point in the form of the premium Olympus TG-6 and much more affordable Fujifilm XP140.

I took one to the beach to see how it fared against its rivals.

Design – The Ricoh WG-6 is tough and utilitarian, with some handy macro lights

Compared to its predecessor, Ricoh has filled out the WG-6 a little bit, giving it a boxier overall shape. This is not necessarily a bad thing, but it has a bit more of an “ordinary” design now. That said, the WG-6 feels, on the whole, well-built with a satisfying amount of weight to it.

On the top of the camera is a dial for choosing between various exposure modes the camera offers, including fully automatic, scene and P (program mode). There’s no fully manual mode here, nor the ability to shoot in Raw format like we see from some other offerings such as the Olympus TG-6. 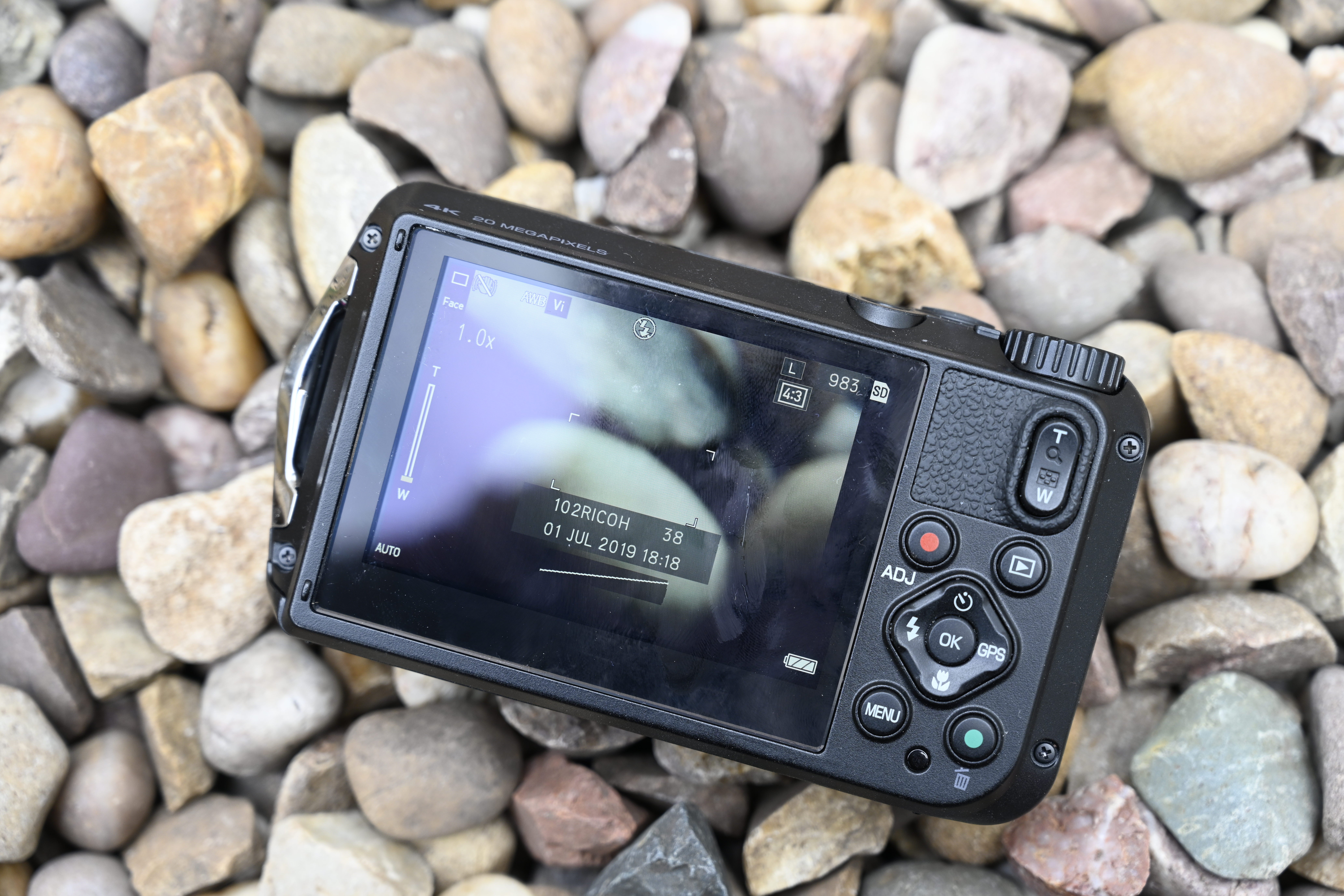 The WG-6’s buttons are nicely laid out and placed and its screen is very crisp, but there’s no viewfinder like the on the Panasonic FT7

One unique feature of the WG-6’s design is a set of macro lights around the camera’s lens. You can activate these by selecting an icon on the mode dial which looks like a microscope. These come in handy when shooting extreme close-ups to illuminate the subject, though it’s worth bearing in mind that files are restricted to 3 megapixels when shooting in this mode.

The battery, memory card slot and charging port are all found behind a single door on the bottom of the camera. A locking mechanism means it a two-step process to open, and therefore less likely to flip open underwater or in sandy/dusty conditions.

Although the WG-6 makes some improvements on the WG-5, some of the changes don’t necessarily equate to a good thing or, most importantly, better images.

The sensor has increased in resolution, but crucially remains at the same 1/2.3-inch size. Indeed, in 2019 you will find smartphones with larger sensors. Now there are 20 megapixels instead of 16, which spells trouble for low-light shooting. That said, it could be argued that as an adventure or holiday camera, low-light is not what it’s designed for. 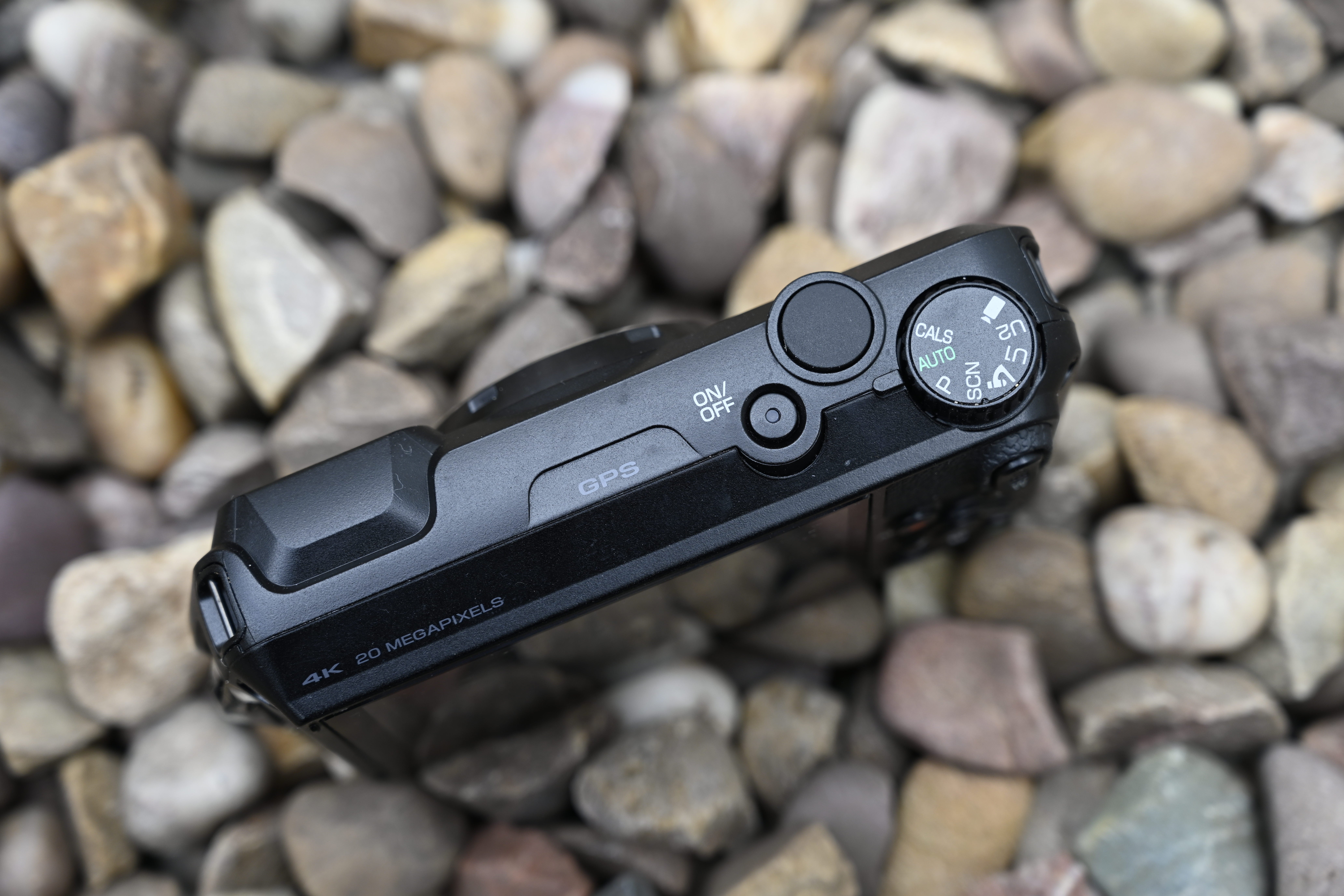 The WG-6 has a handy dial for choosing between exposure modes but, unlike the Olympus TG-6, there’s no manual mode or the option to shoot in Raw to rescue details in post-processing

In what feels like a strange move for a camera announced in 2019, the WG-6 does not have built-in Wi-Fi. GPS is included for tracking where you’ve taken your shots, at least.

On the plus side, the rear screen resolution has been increased to 1.04-million dots, while battery life has also been given a boost and you can now shoot at 5x optical zoom, compared to 4x in the previous model. 4K video, which you can shoot at 30fps, has also been introduced.

Speaking of the lens, the new WG-6 is not quite as wide (28mm vs 25mm), but the maximum aperture has reduced – now offering f/3.5-f/5.5, compared with f/2.0-f/4.9 with the older model. So you get more zoom, but at the expense of light-gathering ability, which again is a downside for shooting in lower light.

Image and video quality – The Ricoh WG-6 delivers in good light, less so in low light

It’s hard to be blown away by image quality from cameras like the WG-6 and others with a similar sensor size. These days, modern smartphones can easily outperform them in terms of image quality. Of course, your smartphone is unlikely to survive diving, rugged mountain biking or even just your kids smashing it around in the sand or off some rocks. That’s where cameras like this come into their own. Colours directly from the camera are bright and punchy, while detail is generally good if a little soft at the pixel level

Images and video from the WG-6 aren’t spectacular, but they are pleasant enough, with nicely saturated images and a good overall impression of detail – particularly when shooting in bright light (which hopefully you will be when on your holidays or travels). As you’d expect from a camera with a 1/2.3-inch sensor, the WG-6 struggles a little more in lower light when it comes to dynamic range

The small sensor, coupled with the lack of a wide aperture, makes this is a camera that isn’t particularly well-suited to low-light shooting, but at least there is a trick up its sleeve for extreme macro shooting. With those kind of subjects you can switch to microscope mode and the macro lights will illuminate – annoyingly, you’re restricted to three megapixel files if you do so though, which is very disappointing.

I compared the WG-6’s macro mode against the Olympus TG-6, which also has a microscope mode. Although the WG-6 has the benefit of the macro lights, being able to shoot at bigger file sizes gives the Olympus the edge.

Should I buy the Ricoh WG-6?

It’s quite hard to get too excited about the Ricoh WG-6, which occupies a kind of middle ground between its waterproof compact rivals.

It’s not quite as expensive as the Olympus TG-6, but it’s also nowhere near as good. If you’re going to compromise on image quality and features to save money, you’d probably be better suited to something even cheaper, such as the Fujifilm XP140 (or its now-discounted predecessor, the XP130). If you’re particularly keen on shooting macro images, the WG-6 might seem like a good choice with its in-built macro light feature being unique among compact cameras. Unfortunately, you’re restricted to shooting at just three megapixels with this mode, which is a bit off-putting and again makes the Olympus TG-6 more appealing.

Although Ricoh has increased the resolution for this camera, it’s kept the sensor size the same and paired it with a much slower lens, resulting in a camera which doesn’t perform particularly well in low light. In good light, the WG-6 is a perfectly decent compact, but the Olympus TG-6 and Fujifilm XP140 are more compelling buys for performance and value respectively.