What is the Ricoh Theta?

The Ricoh Theta is a camera dedicated to taking 360-degree panorama photos. Think Photo Sphere on Android Jelly Bean smartphones and tablets, but without having to slowly thread images together shot by shot.
Launching in Europe by the end of October priced at 399 Euros (£336), the Wi-Fi enabled Theta is currently iOS, Mac and PC compatible. So, it will be arriving just in time to use with the iPhone 5S and iPhone 5C. It’s clearly a lot of money to spend on a camera that’s a one trick pony. 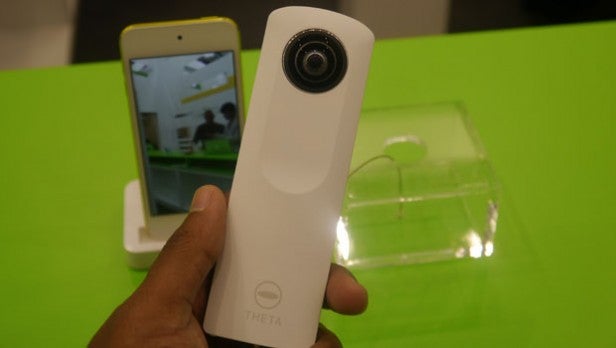 About half the size of a pocket pico projector, the Theta features two small lenses on either side of its textured white body to capture a combined 5-megapixel resolution quality 360-degree image. Just below is the camera shutter and on the side you’ll find Wi-Fi syncing and on/off buttons. On the bottom there’s a micro USB port to charge and a tripod mount hole for hands-free shooting.

There’s no screen to scope out the scene pre-shot, but you can hold the camera at any angle and it’s still capable of taking a 360-degree photo.
The Theta weighs an ultra-light 95g and is small enough to slip into your pocket next to your smartphone. The textured surface makes it comfortable to grip when you are taking a picture as well. 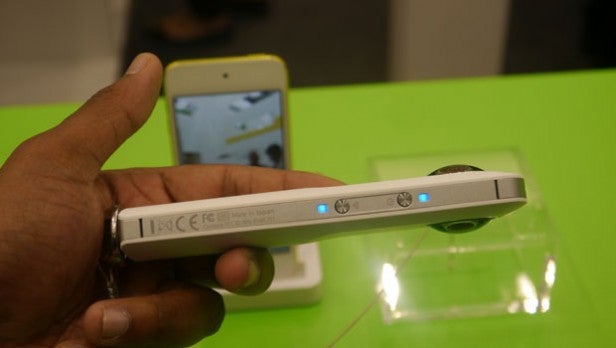 There’s no manual settings on the camera itself, so exposure and white balance is all done for you automatically. It has a shooting range of around 10cm to infinity and an ISO sensitivity range of 100-600 to shoot in low light conditions. From the app you can adjust the image brightness, but it’s largely down to the camera to take care of the setup.
Images can be stored on the 4GB internal memory giving you room for around 1,200 pictures. The Theta works with a Windows and Mac desktop application to store photos and update firmware. There’s also a free Ricoh Theta iPhone app and currently supports iPhone 4S and iPhone 5 running on iOS 6.0 or above. An Android app is on the way and is scheduled to be ready before the end of the year. 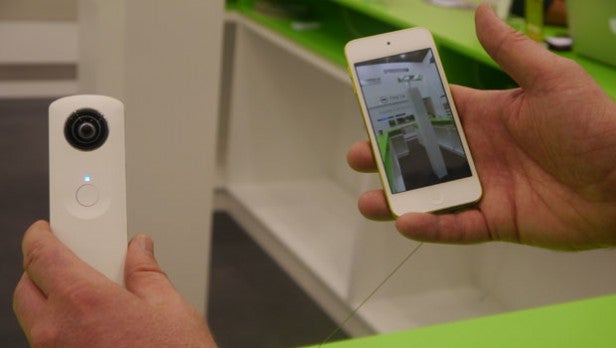 The iPhone app is a pretty simple setup. You can take images from within the app, view images in all their spherical glory and upload to Facebook, Twitter and Tumblr. Additionally there’s also Microsoft Photosynth support to view and zoom around images from all angles.

In terms of battery life, Ricoh claims the built-in rechargeable Li-ion battery will last for around 200-250 pictures. We guess that would be enough to use for a trip abroad if you are not planning to only take 360 degree images on your holiday.

Whether you are taking images with the camera or your iPhone, it’s extremely easy to use. Aim the camera, or simply hold it out in front of you and simply hit the shutter. Sending images to the phone takes a matter of seconds and it processes images quicker than it does using the Photo Sphere camera feature on Android devices. 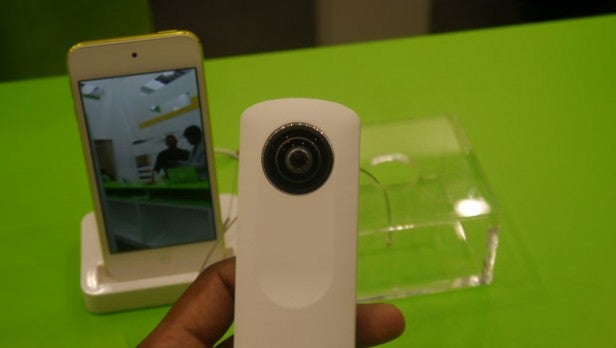 It captures 360 degree images far better than Photo Sphere currently manages and pinching and zooming around the image you can see there’s no reason to worry about the threading issues and disjointed effect the Android camera feature suffers from.

The image quality is not great however. The 5-megapixel quality shots it produces are on par with what you’d expect from a mid-to-low range smartphone. It’s fine for Facebook, Twitter and websites, but photos lack the kind of vibrancy and image sharpness we’d expect from a camera that costs more than £300.

Aside from the consumer angle it could well find a niche use for estate agent’s looking to show of property or providing a better online view of hotels, restaurants and holiday homes. 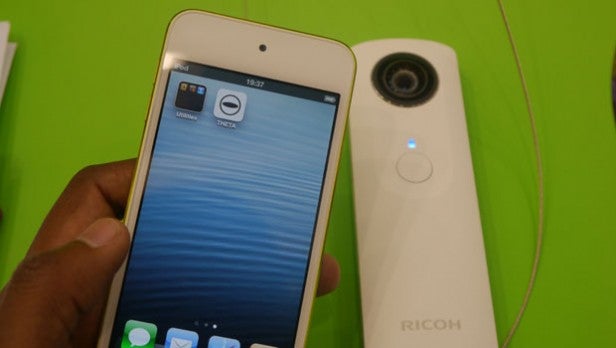 The Ricoh Theta takes great 360-degree spherical photos and is small and portable enough to slip into your pocket. We were expecting more impressive image quality though and the app could benefit from having more manual settings.  There are already iPhone apps available that can capture 360 images like 360 Panorama and an app like Cycloramic can even capture 360 degree video.
If you really only want to shoot 360 images, the Theta does a fantastic job of capturing the entire scene. At more than £300 we are not sure the Theta offers great value for money.