Whether you call them “interchangeable lens cameras”, “mirrorless system cameras”, or my current favourite “compact system cameras”, a new type of camera was born with the launch of the Panasonic Lumix G1 in 2008. Olympus joined in early last year with its popular Pen E-P1, and this year Samsung and Sony have both jumped on the bandwagon. However they will have found to their consternation that Ricoh was already there, having launched its innovative but rather strange GXR system in November last year.

Although it has a tiny share of the market compared to the likes of Panaonic, Sony and Samsung, Ricoh has always been one of the great innovators of the digital camera industry, coming up with a number of ideas which other companies have copied and taken on to commercial success. However while long-zoom compacts with wide-angle lenses have proved to be a big hit, whether the GXR concept will become as popular remains to be seen. While the other manufacturers have adapted the traditional SLR system of lens mounts and interchangeable lenses, the GXR has a unique modular design, with the lens and sensor combined as a removable, interchangeable unit. Ricoh has reasons for doing this, and to be honest they are good ones, but while there are some advantages to doing it this way, there are also disadvantages. 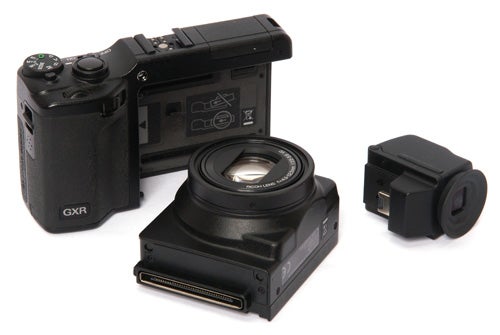 Ricoh claims that by having the lens and sensor in a combined unit it avoids certain optical compromises that have to be made with an interchangeable lens and mount design, allowing each lens to be matched to a sensor that can be optimised to suit its optical properties. It also avoids a problem that plagues all interchangeable-lens digital camera designs, that of dust getting on the exposed sensor when the lens is removed. It also saves a bit of weight and bulk by eliminating the mount. The major disadvantage is that the lens/sensor component is much more expensive than a corresponding lens for another system. It is also potentially larger and heavier. 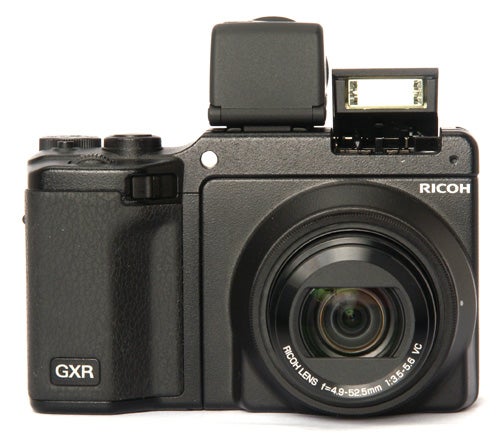 The design of the camera body section is derived at least in part from Ricoh’s excellent but expensive GR Digital compact. It is made from tough but light magnesium alloy, and is finished in a scratch-resistant high-friction matt black crackle coating. The front handgrip and rear thumbgrip area are covered in textured rubber, and the whole thing feels very robust and solidly made.


The control layout is also derived from the GR Digital, with a small shooting mode dial on the top panel, with a locking button to prevent accidental jogging. It has the same user-configurable Adjust lever at the top of the rear panel, and a single adjustment wheel mounted on the top of the handgrip. The D-pad is slightly unusual in that it has eight directions rather than the usual four, allowing quicker diagonal movement of the adjustable focus point but not really conferring any other advantages. The secondary functions of the D-pad can also be configured by the user. There are dedicated buttons for the self-timer, macro mode (also used for focus adjustment in MF mode), display mode, switching between the LCD monitor or the optional electronic viewfinder, and also for activating the new Direct menu, a quick menu system for adjusting main camera settings. 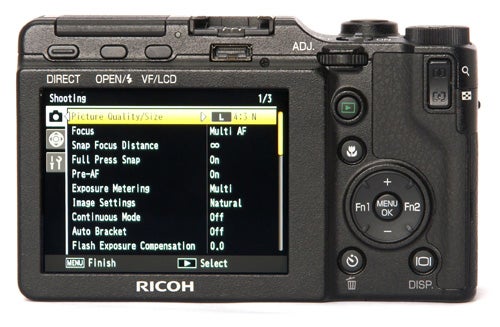 I’ve always admired Ricoh’s control interface for its versatility and ease of use, but with the GXR I think they may have gone a bit too far. With so many ways of accessing various functions the result is jumbled and confusing, and the layout of the controls is also a bit of a mess. Even with the rubber thumb grip the camera is not particularly comfortable to hold, and the position of the buttons does get in the way. The vertically mounted zoom control is also less than ideal. One stand-out feature however is the LCD monitor, which is a big three-inch unit with a resolution of 920,000 dots. It has a good anti-reflective coating, and extremely wide angle of view and works well even in bright sunlight.

The interchangeable mechanism itself works well. The lens-sensor unit is released with a large accessible switch on the side of the handgrip, and slides in and out sideways. The mounting rails are metal, and the unit slides into place with a satisfyingly solid click. Electrical connection to the camera body is via a wide multi-contact edge connector, and I can’t help but feel that this is a potential weak spot of the design. Electrical contacts, and especially edge connectors, do wear over time, and are also vulnerable to dirt and dust. However I experienced no problems with this while I was testing the camera. 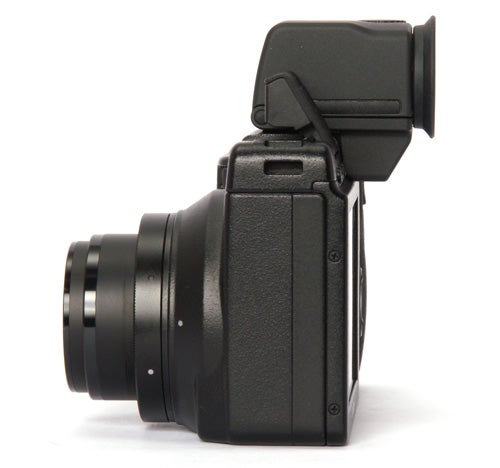 
The list prices of these units illustrate the main stumbling block of the GXR design. The P10 unit costs around £270, the S10 is £300, while the A12 with its big sensor is around £500, roughly the kit price of a Sony NEX-5 with an 18-55mm lens. Add to this the price of the body unit, currently listed at around £350 and you really have to wonder who is going to buy the GXR system when there are better specified compact system cameras available for much less.


Considering its very high asking price the GXR is lacking in several key areas. It has no mechanical image stabilisation in either the body or the current lens units, and the degree of photographic control is also more limited than I would have expected. Shooting modes include program auto, full manual and both shutter and aperture priority, as well as a limited range of scene modes. Shutter speeds from 30 seconds to 1/2000th of a second are available, but for the P10 lens unit at least only minimum or maximum aperture can be selected, hardly the sort of versatile control likely to lure users away from a digital SLR system. 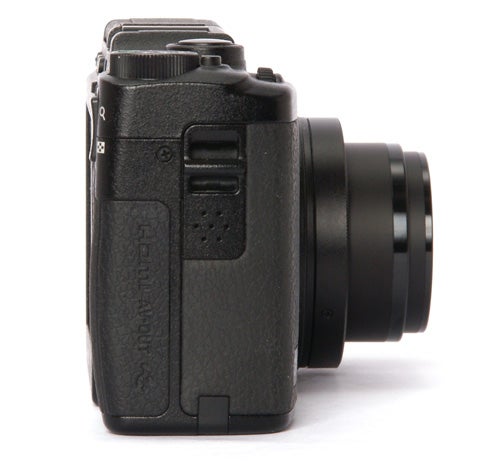 The usual array of metering modes – multi-zone, centre-weighted and spot – are available, and it has a range of autofocus modes including multi-point, spot AF, multi-target AF, infinity, manual focus and a a snap-focus mode with a selection of pre-set distances. Colour and tone control at least do offer some versatility, with a range of pre-sets as well as two user-configurable settings that can be customised for saturation, sharpness and contrast as well as individual colour balance settings.

The camera’s overall performance is generally quite good. It takes approximately three seconds to start up and take a picture, which is a bit on the slow side, but in single shot mode it can maintain a shot-to-shot time of approximately 1.2 seconds, which is reasonably fast. In standard continuous shooting mode it can maintain a good speed of just over four frames a second apparently until the memory card is full, and also has several faster high-speed modes, although at reduced resolution. 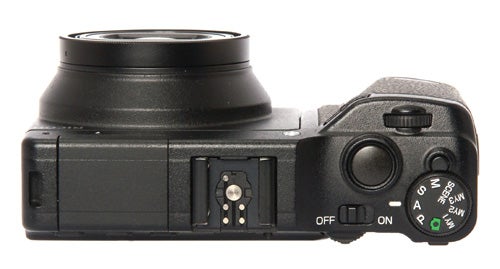 The autofocus system is very quick in good light, although it does slow down noticeably in reduced lighting. It has a good AF lamp and can focus in darkness at a range of several metres. However I did find that the auto focusing was frequently very inaccurate, producing blurred shots even with good well-lit high-contrast subjects. This is a major flaw for an expensive camera with professional aspirations.


Image quality was also not without its problems. I was only able to test the GXR with the 10-megapixel 28-300mm P10 lens unit, which has the weakest sensor of the three currently available, a tiny 1/2.3-inch chip no bigger than those usually found in pocket compacts. The results were quite disappointing, with poor overall detail, excessive barrel distortion at wide angle, severe chromatic aberration, limited dynamic range and poor colour rendition, especially in the “Vivid” colour mode. Image noise was also a major issue, with visible noise from 400 ISO upwards. 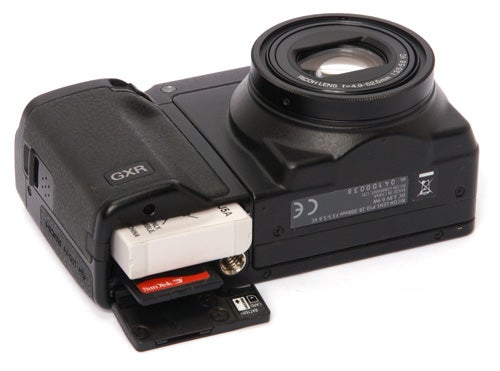 Overall the GXR is something of a disappointment. I’m usually a fan of Ricoh cameras, and have owned several over the years. However the GXR system appears to be poorly conceived, with a number of disadvantages compared to other interchangeable lens systems, not least its very high price. The image quality from the 12-megapixel 50mm APS-C lens unit may be better, but for the cheaper P10 unit the results were very disappointing. Compared alongside other rival systems, especially Sony’s outstanding NEX-5, I can’t see a bright future for Ricoh’s GXR concept.

While the GXR is well made, technically proficient and has good overall performance, the very high price of the lens/sensor units and the disappointing image quality shown by the test unit, as well as the unreliable autofocus system mean that the GXR isn’t much competition for the other compact system cameras that are available. 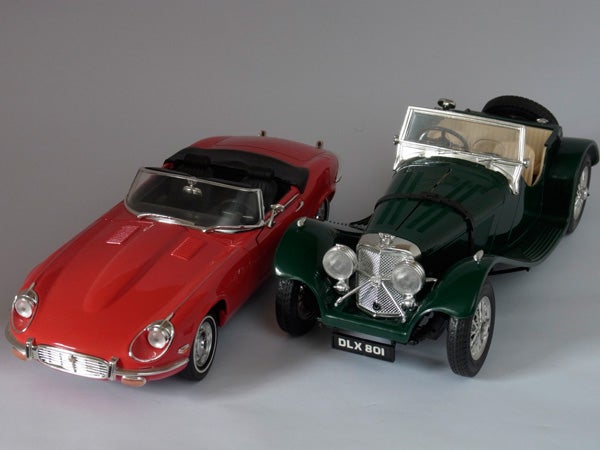 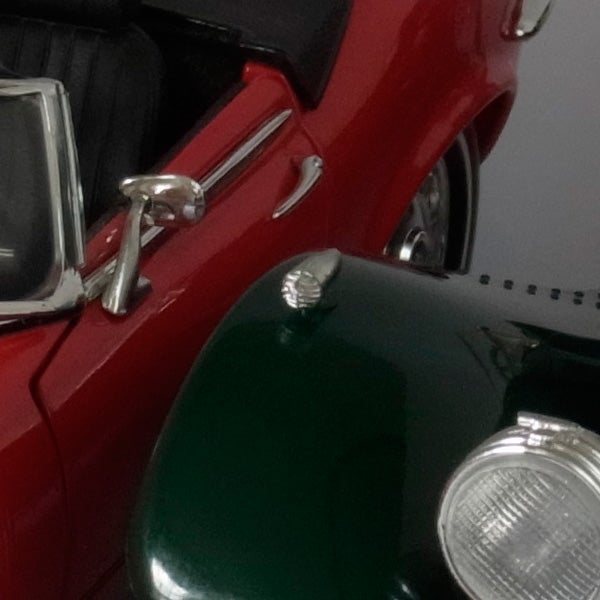 At the minimum 100ISO the image quality is good, but a bit under-exposed. 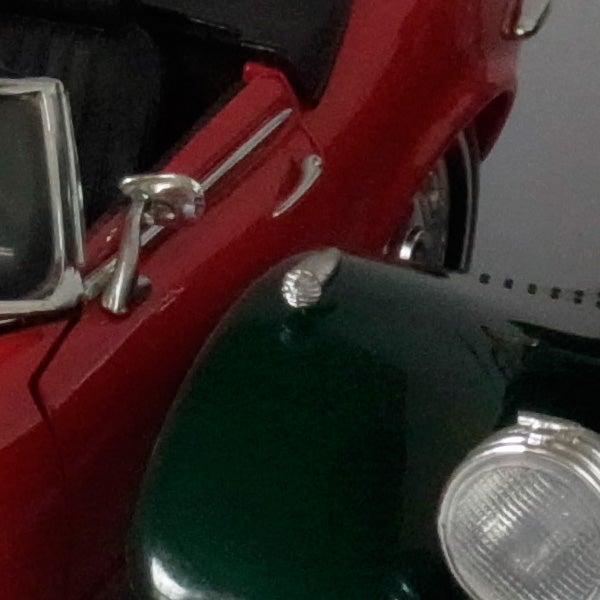 Noise is starting to creep in at 400 ISO. 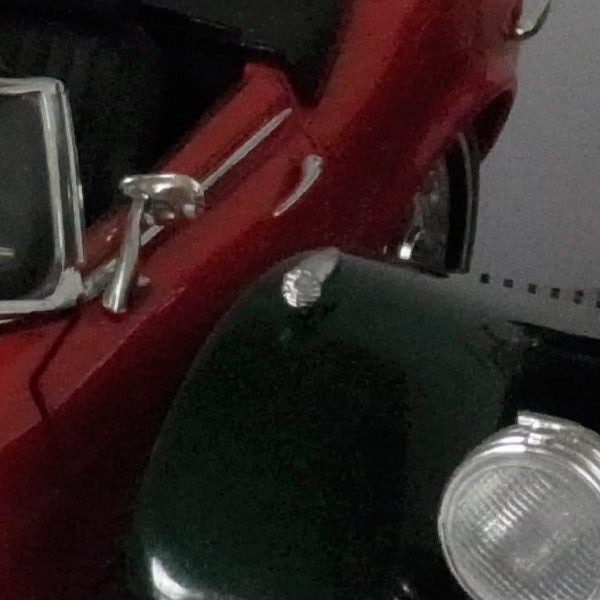 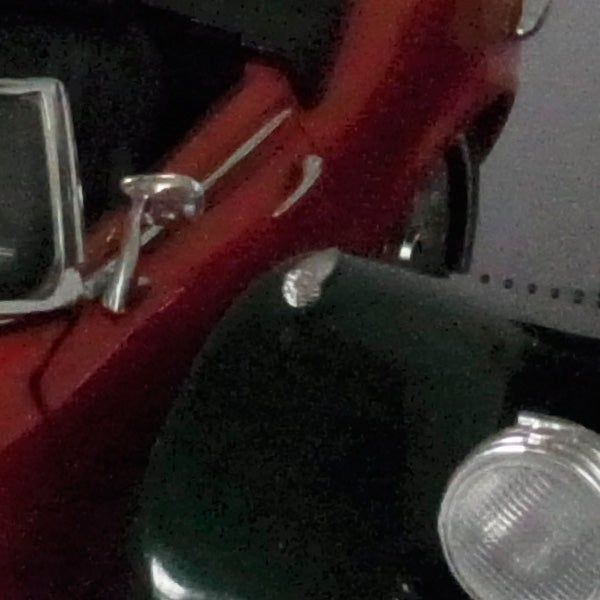 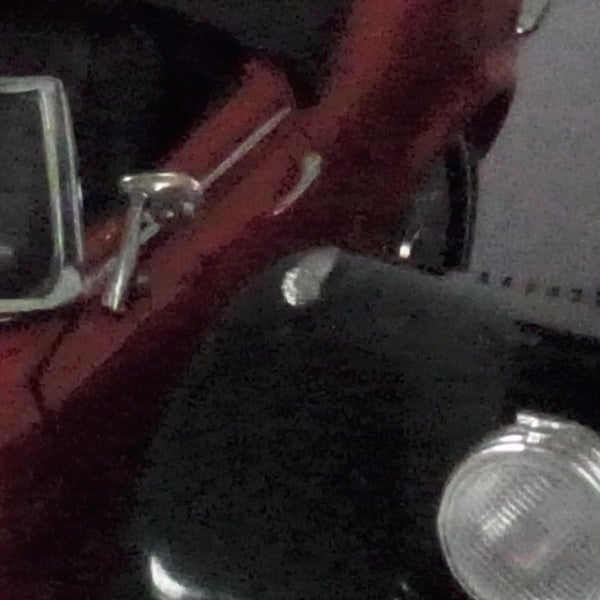 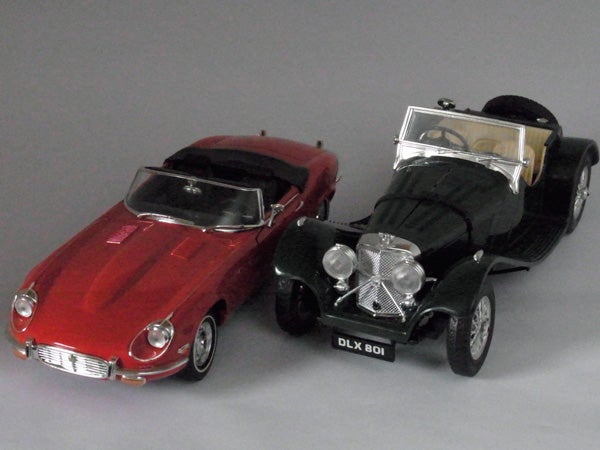 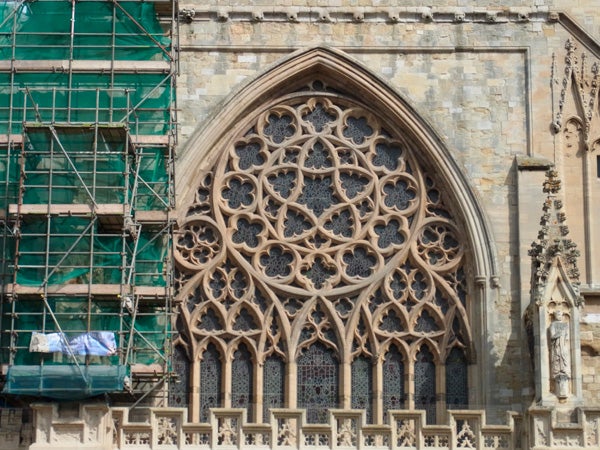 Here’s the usual detail test shot of the West Window of Exeter Cathedral, for you to compare with other cameras. See below for a full res crop, or click to see the whole picture. File size 2MB. 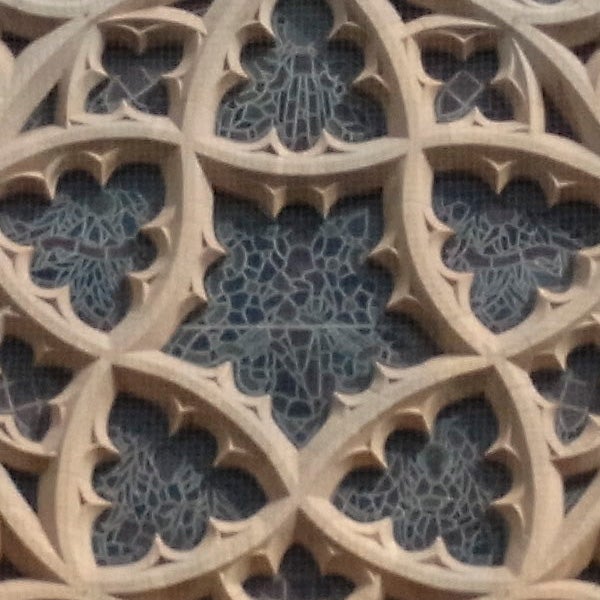 As you can see the autofocus has messed this one up badly. I’ll try and get a better test shot tomorrow, weather permitting. 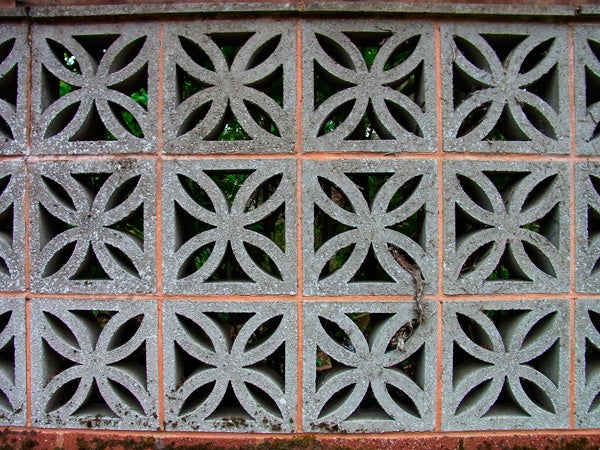 Centre sharpness isn’t bad in this shot, but no better than a 10MP compact. 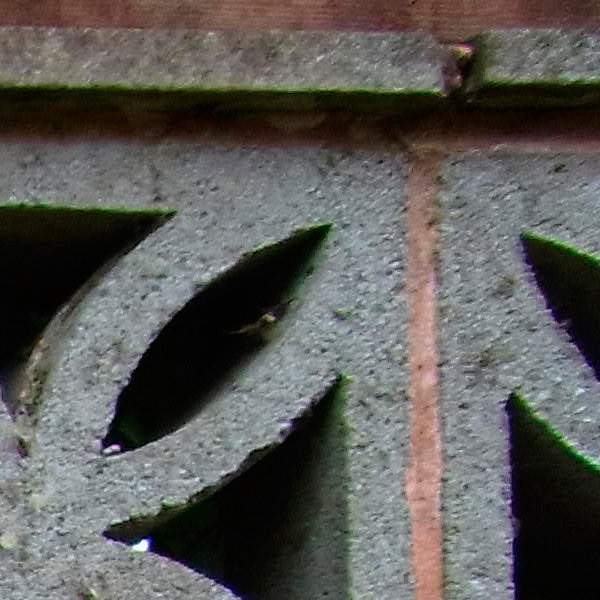 Corner blurring and bad chromatic aberration at the corners of the frame. 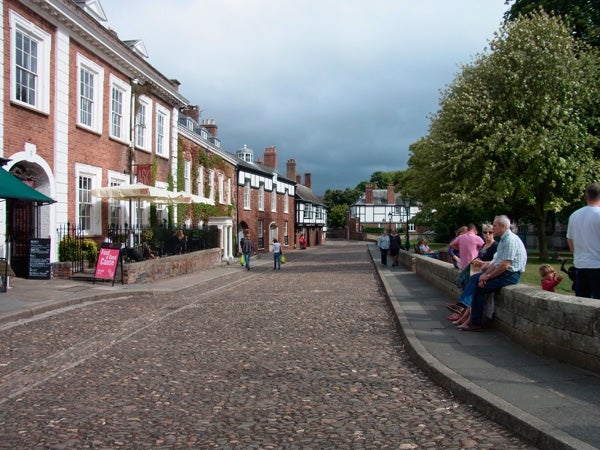 The wide angle of the P10 lens is equivalent to 28mm. 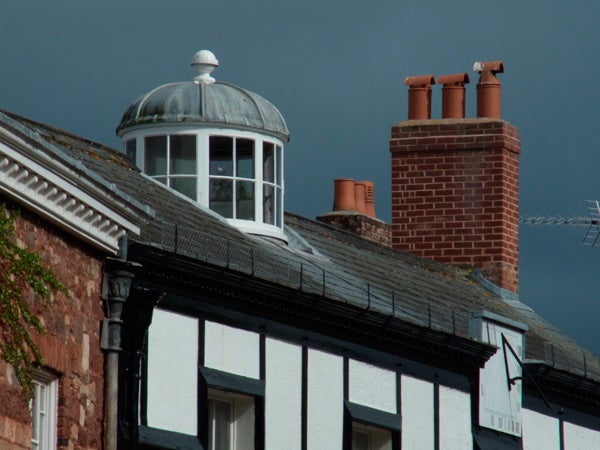 The telephoto end is equivalent to 300mm. I just got this one before it started to rain. Dynamic range from the tiny sensor is disappointing, with poor shadow detail. 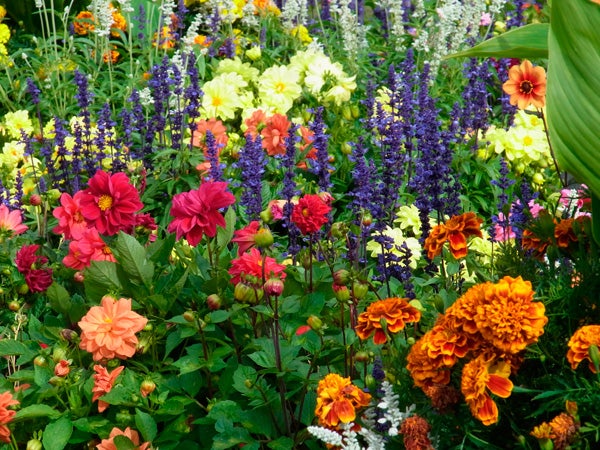 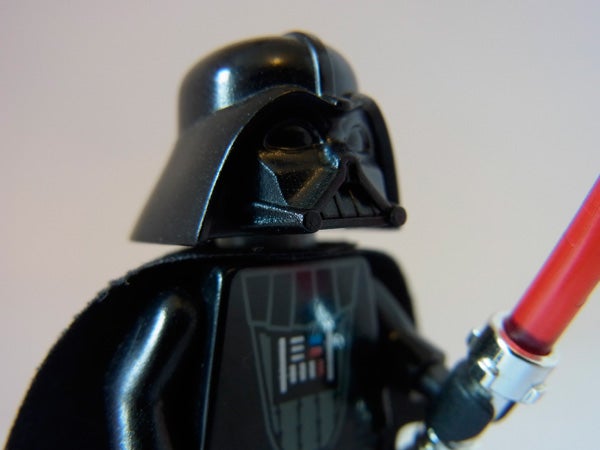