Last week Jamie reviewed the Ricoh GX200, a £350 12-megapixel compact camera with a 3x zoom lens and a range of features designed to appeal to enthusiast photographers. Today I’m taking a look at the GX200’s stablemate, the Ricoh GR Digital II, an even more specialised camera unlike any other camera on the market – except one. 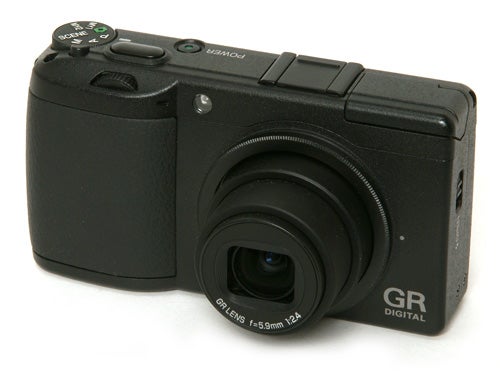 The GR Digital II is a replacement for the original GR Digital which Ricoh launched in 2005. I’ll come clean and admit that I own a GR Digital, in fact it’s the only compact camera I do own. I’ve used it extensively for landscape, travel and macro photography, where its wide-angle f/2.4 lens and excellent Raw image quality at low ISO settings have provided some superb shots that I couldn’t easily have taken with any other camera. While it’s never been a particularly big seller, the GR Digital gained positive reviews from most sources and has many fans, myself included. Hopefully the Mk. II version can live up to its predecessor.


The appearance and specification leave no doubt over its ancestry. The body design is almost identical to the Mk. I, a no-frills matt black rectangular box finished in a scratch-resistant high-friction coating, with a comfortable rubberised handgrip, a recessed hot shoe and a pop-up built-in flash. It has the same high quality non-zoom f/2.4 GR lens with a focal length of 5.9mm, equivalent to a fixed 28mm wide-angle. In fact sitting the two camera side-by-side it’s hard to tell them apart at first glance. 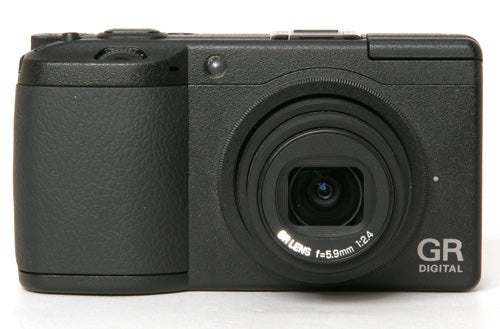 However a closer inspection reveals a number of significant differences. The LCD monitor has been enlarged from 2.5 inches and 210k dots to 2.7 inches and 230k dots and now has a very wide viewing angle of approximately 170 degrees, the sensor for the original camera’s hybrid AF system has disappeared, and there are a couple of different options on the main mode dial.

Ricoh’s intention with the GR Digital (both I and II) is to make a compact camera with the control and versatility of an SLR, and within the limitations of the format it largely succeeds. The range of exposure control is wider than most other compacts, with aperture settings of f/2.4 to f/9.0 available in 1/3EV increments. There is no shutter priority option, but the inclusion of full manual exposure makes up for it, with shutter speeds from three minutes to 1/2000th of a second available. Exposure settings are adjusted via two input controls, similar to the dual-wheel control system found on top DSLRs. 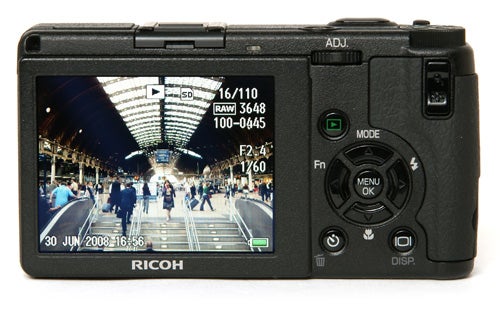 The rear control also doubles as a function menu button and selector for quick adjustment of up to four frequently-used parameters. The selection of parameters available on the function menu can be chosen by the user via the menu.


The menu also offers a wide range of control over picture style and quality. There is a huge list of image size options, frankly more than anyone could sensibly need, but it does include three different sizes of Raw file. The GR Digital uses the Adobe DNG Raw file standard, which is growing in popularity.


The main mode dial has two positions that weren’t present on the original model. These are My1 and My2, which as the name suggests are user-programmable pre-sets. There GR Digital offers a very wide range of user control, so it’s certainly useful to be able to save a particular set of parameters. 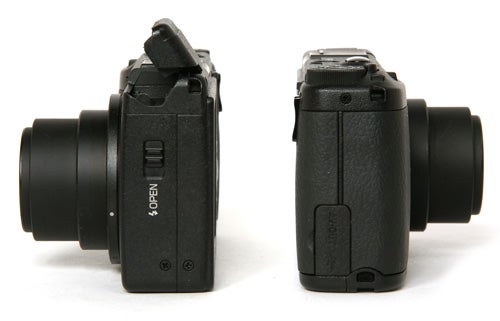 Most of the control over picture style is found in the Image Set option of the main menu, which offers a wide range of pre-set styles, including four which can be customised by the user, with a wide range of adjustments for colour depth, contrast and sharpness in the colour modes, as well as two black and white modes, one of which has an adjustable toning effect. As well as these adjustments, image noise reduction can be turned on or off, and the camera also features a versatile manual white balance option, with colour temperature settings and fine adjustment of pre-set values.

For a camera with semi-pro pretensions performance is obviously an important factor. The original GR Digital had a fast hybrid autofocus system, but this has been replaced with a nine-zone contrast detection system, which is still nice and fast and also operates extremely well in low light thanks to a good bright AF assist LED. As a result shooting speed is also very quick, with a consistent 1.4 seconds per shot at the highest quality JPEG setting, which is slightly faster than the previous model. In continuous shooting mode it is even faster, shooting at just over two frames a second, which it can maintain until the card is full. In the highest Raw setting shooting speed drops to four seconds per shot, but this is a massive improvement over the original model, which would take around 13 seconds to process a Raw shot. Start-up time is approximately 2.5 seconds. 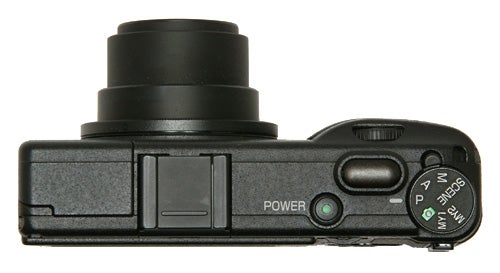 Picture quality is also a crucial consideration, and it is here where the original GR Digital excelled, although some commentators criticised it for image noise at higher ISO settings. Since the new model uses the same lens optical quality is unchanged, and is still superb, with virtually no barrel distortion and very good edge-to-edge sharpness. The final images are slightly soft in default mode, but adjusting the sharpness either in the menu or afterwards in editing produces better results. Shooting in Raw mode and converting images in Photoshop, as most serious users will prefer to do, overall picture quality is excellent with good colour depth and above average dynamic range for a 10MP camera.


Shooting at 80 ISO with noise reduction turned on there is absolutely no trace of image noise and the resulting pictures are among the best I’ve ever seen from a compact camera. As with most 10MP compacts however, noise does begin to become a problem at higher ISO settings. At 200 ISO colour noise is visible particularly in the green channel, although not enough to cause a serious problem, and even at 400 ISO there is little loss of either detail or colour fidelity. However at 800 and especially at 1600 ISO image quality does suffer a great deal, so it would be best to avoid these settings for important shots. 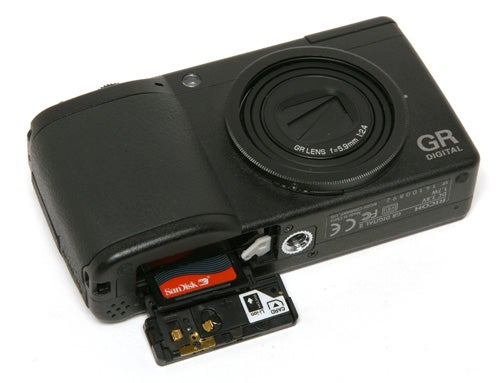 Perhaps more important than anything else though is the sheer pleasure of using the GR Digital II. It is a real photographer’s camera, and its combination of versatility, performance and handling encourage you to use it, and once you start it’s difficult to stop. The fixed-length lens means that you have to think about your shots more, and the result is more and better pictures, which in my opinion is as good a reason as any to choose it. I will very likely buy one of these cameras myself.

The Ricoh GR Digital II is a unique and ambitious camera. Despite its lack of a zoom lens it offers a level of versatility higher than almost any other pocket-sized compact camera on the market. Handling, performance and build quality are all of a very high standard, and image quality is excellent at low ISO settings. More importantly it is a genuine pleasure to use and encourages creative photography. For enthusiast photographers looking for a compact camera it offers one of the few serious alternatives to the Canon G9. 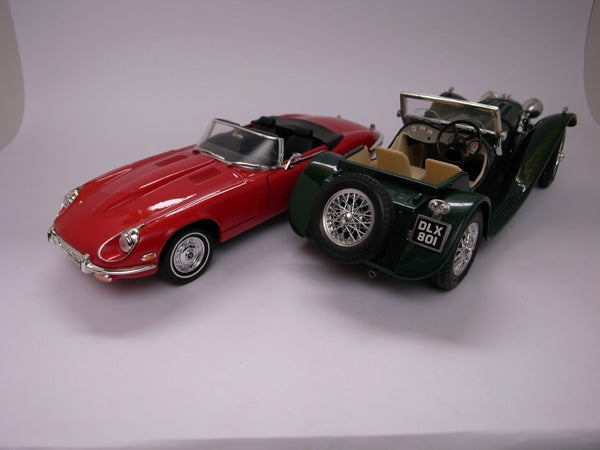 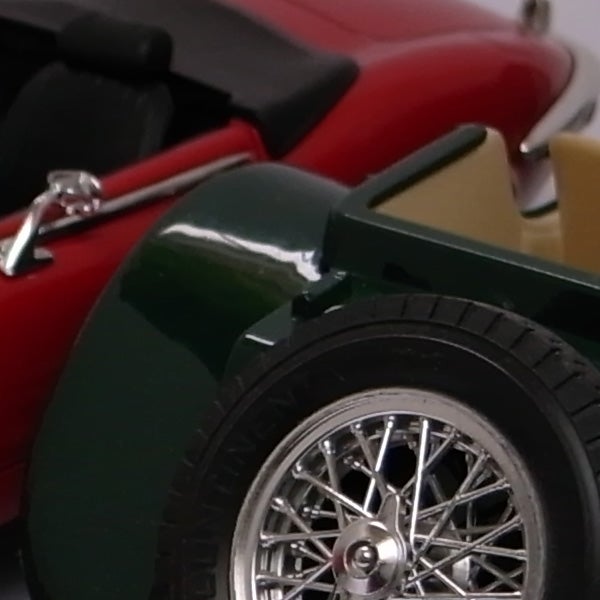 At the lowest ISO setting the image quality is superb, with smooth colour tones and no visible noise. 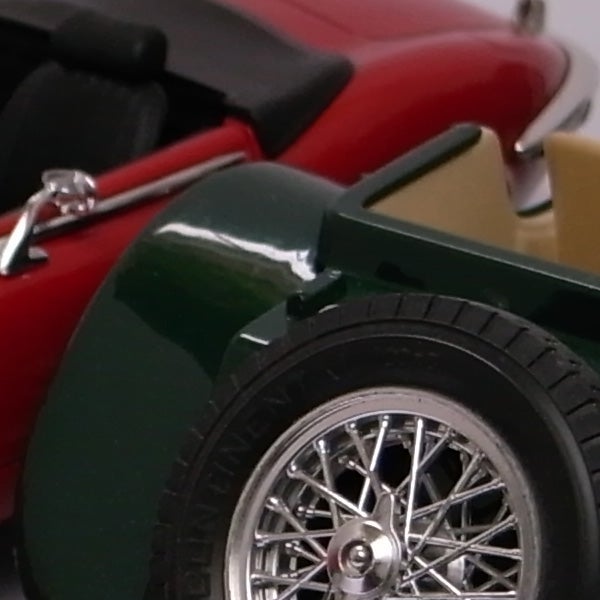 Still no noise problems at 100 ISO, as one might expect. 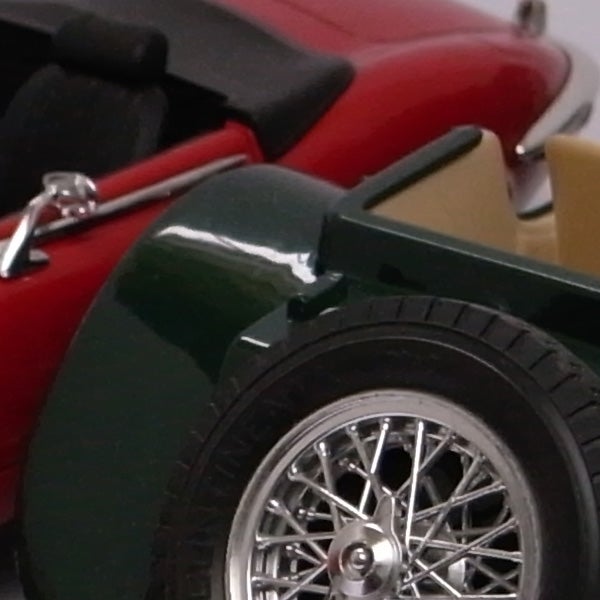 At 200 ISO there is a little fine-grained colour noise, but not enough to cause a problem. 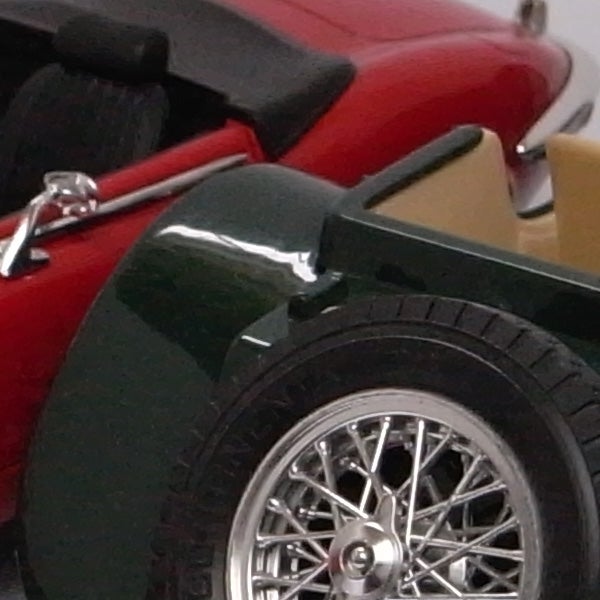 Noise is more visible at 400 ISO, but colour accuracy and detail are still very good. 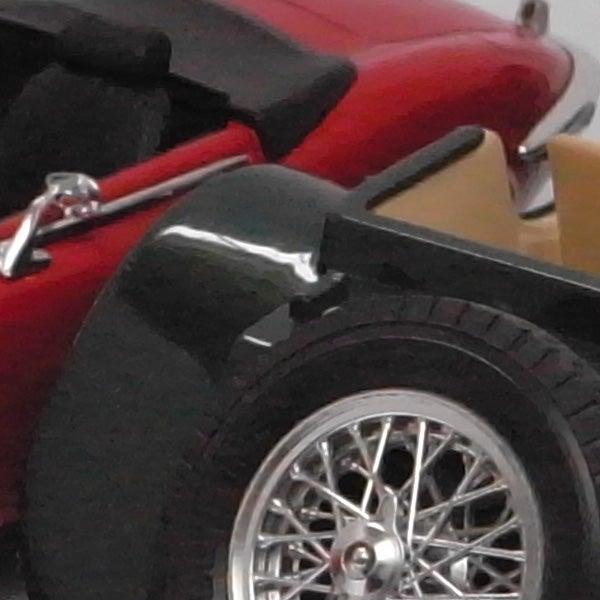 Image quality is very much worse at 800 ISO, with poor colour and little fine detail. 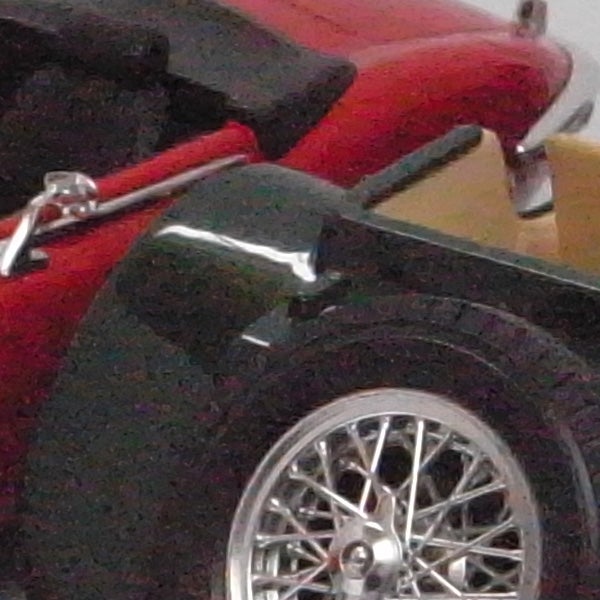 At 1600 ISO the image quality is very poor indeed. 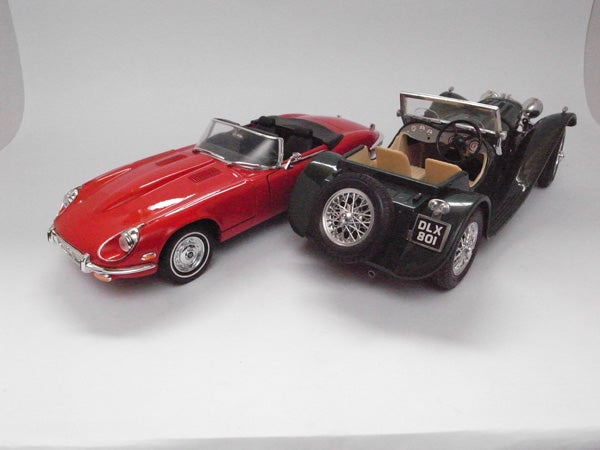 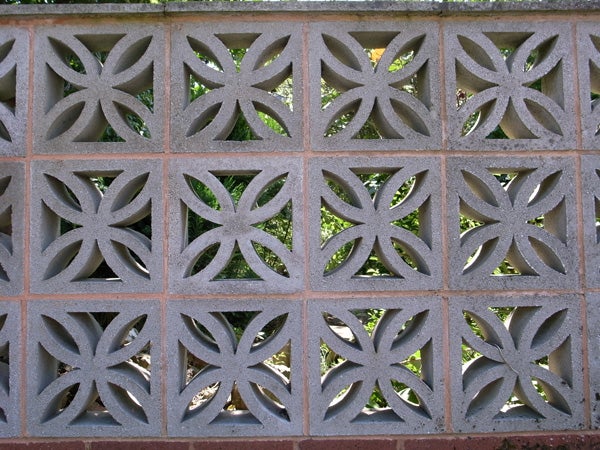 No cathedral window shot for the GR Digital II, since it doesn’t have a zoom lens, but my favourite garden wall shows remarkably little distortion thanks to the excellent 28mm equivalent wide-angle lens. 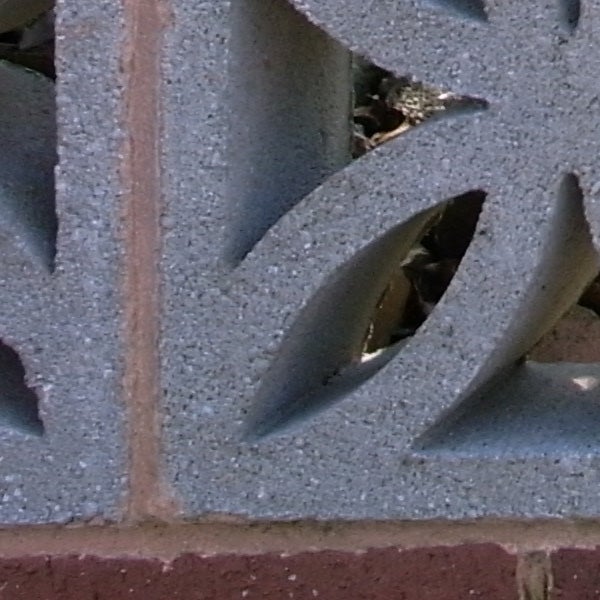 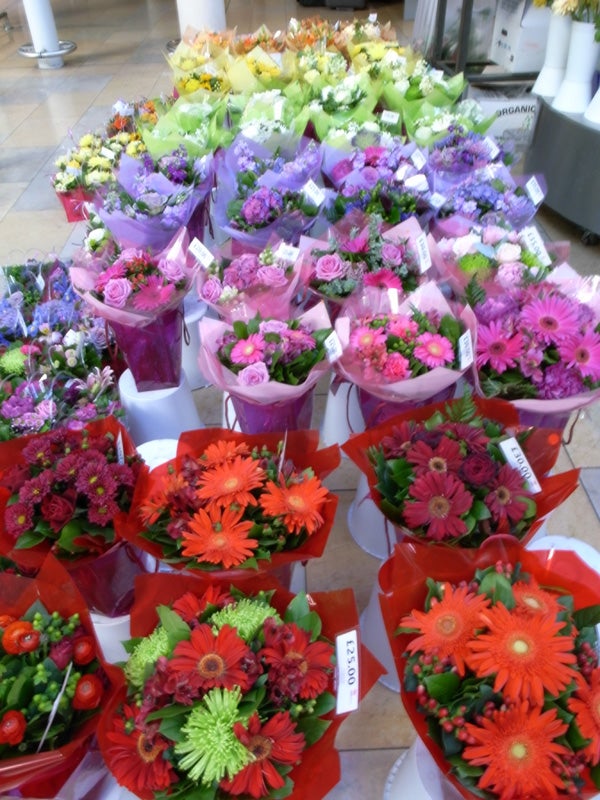 Considering this was shot hand-held at 1/3rd of a second on a camera with no image stabilisation it shows very little camera shake. Colour depth and saturation are excellent. 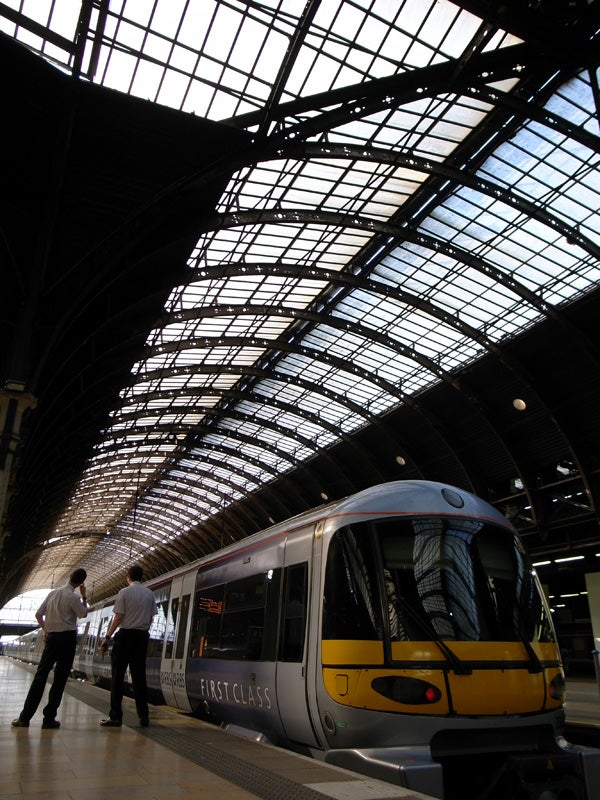 The GR Digital is a pleasure to use. I nearly missed my train I was having so much fun. 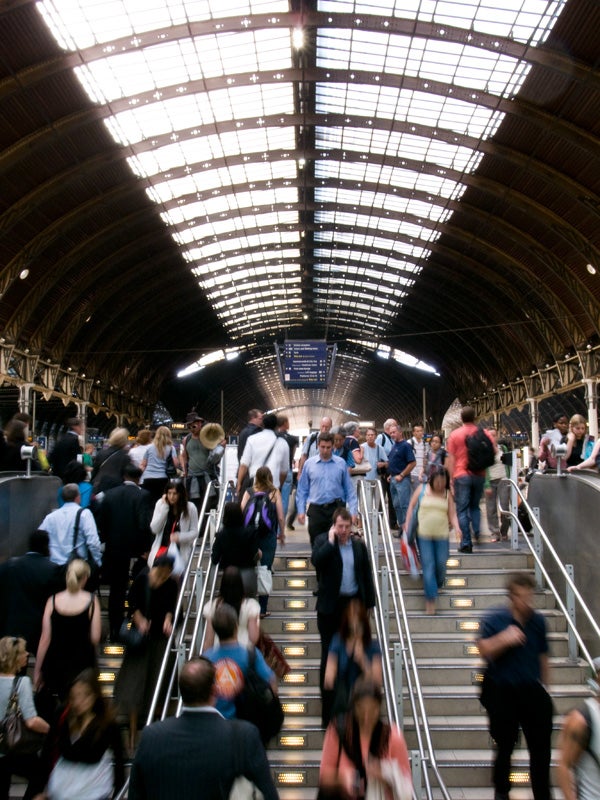 This was shot using aperture priority on f/9 and a shutter speed of 1/9th of a second, with the camera braced on a railing. 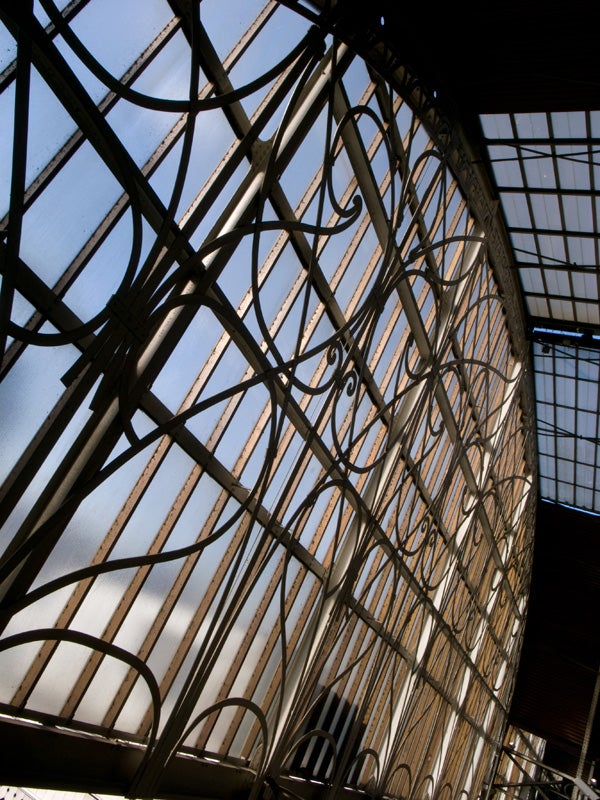 Dynamic range is better than average for a 10MP camera thanks to the larger 1/1.75-in sensor. 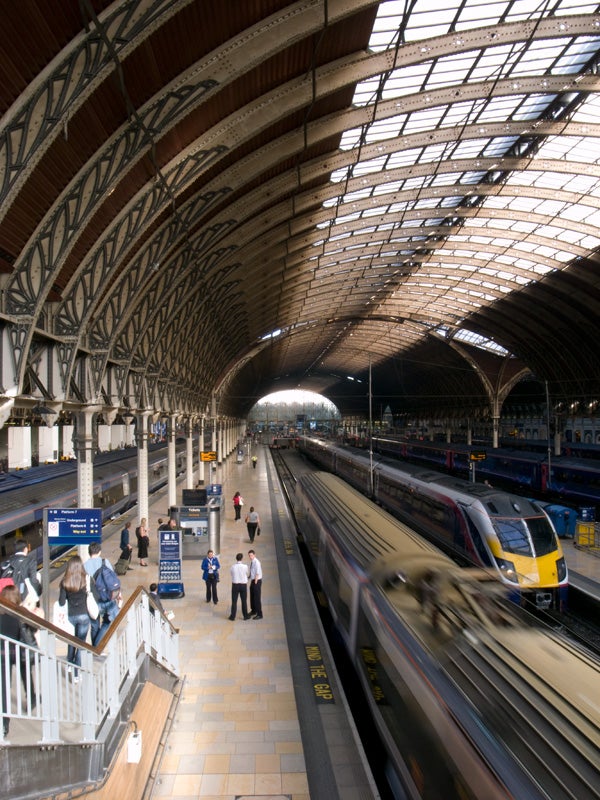 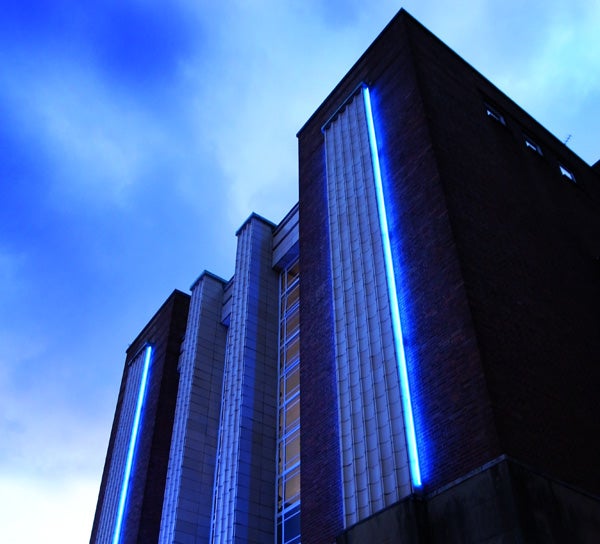