I’ve been following Ricoh’s digital camera development with interest for a number of years. The first digital camera I ever owned was a Ricoh RDC-5000 back in 1999. It was one of the first 2.3-megapixel cameras to be launched, and at the time it was the most compact and powerful digital camera on the market. Of course by today’s standards it resembles a housebrick with a lens, and could eat a set of four AA batteries in about 20 minutes, but even then it had some innovative features that we now take for granted, such as a metal body, an automatic lens cover, a USB port and 4cm macro focusing. Ricoh has continued to innovate and improve over the years, and its products have seldom been far from the cutting edge of digital camera design. Models such as the Caplio R3, the R5 and the excellent R6 launched earlier this year have all scored high marks in reviews, although they never seem to get the market share they deserve. It must be down to poor advertising, because in terms of quality and capability Ricoh’s cameras are a match for the very best of the competition. 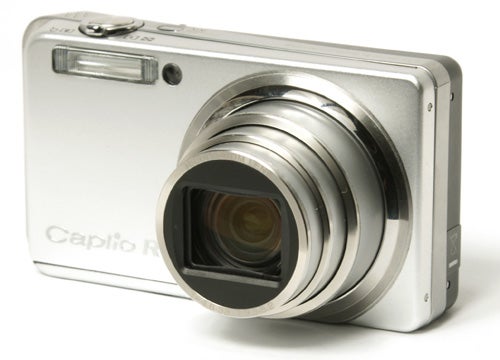 The Ricoh Caplio R7 is the latest in the range, and was launched in August this year. It is an 8.15-megapixel compact camera featuring a 2.7-inch monitor with 230k pixel resolution, moving-sensor mechanical image stabilisation, and a flush-retracting 7.1x optical zoom f/3.3 – f/5.2 lens with a zoom range equivalent to 28-200mm. Despite this specification the camera is exactly the same size and weight as the Caplio R6, measuring 99.6 x 55 x 23.3mm and weighing 161g including card and battery. From the front at least the body design is also the same as the R6, which is no bad thing since it is very attractive. There are a few tweaks on the back however, with a new larger rubberised thumbgrip and a slightly different control layout to accommodate a couple of new features. 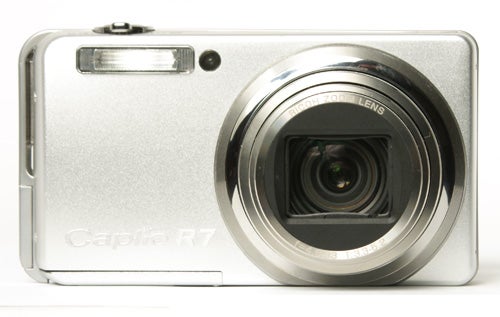 There are relatively few cameras on the market that can match the R7’s specification, but one that springs to mind immediately is the Panasonic Lumix TZ3, which offers a 10x zoom lens and 28mm wide-angle, but is only 7.1 megapixels, is larger and heavier and has a smaller monitor. It is also around £235, while the Ricoh R7 is currently selling for around £220. Other than that it’s pretty much in a league of its own. There are other cameras that have longer zoom ranges, but none that combine longer zoom with 28mm wide-angle, image stabilisation and an almost ultra-compact shape.

As with previous Ricoh Caplio models, the initial impression is very favourable. The body is all metal, with excellent built quality and good fit and finish to the controls and hatch. It’s not a flashy-looking camera, but it does have a distinctive style that is instantly recognisable. For some reason, possibly the relative size of the lens mounting, the R7 looks at first glance to be somewhat bigger than it actually is. Sitting it on my desk next to a couple of Pentax and Casio ultra-compacts reveals the R7 to be surprisingly small, within a few millimetres of the Optio M40. It’s a little thicker at 23.3mm, but it will still slip unobtrusively into any pocket or handbag. 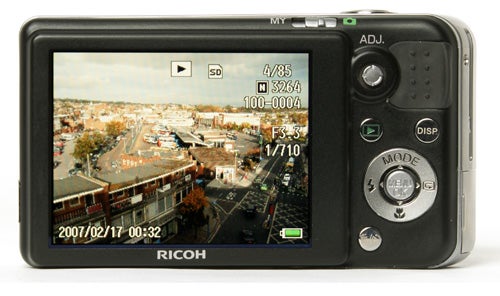 As well as the new sensor, the R7 has a couple of other new features too. The first is the new Smooth Imaging Engine III, the camera’s image processor, the output of which we’ll discuss in a moment. Externally the main new feature is the ADJ control, a small four-way joystick-like control separate from the main D-pad. This allows quick on-screen adjustment of up to four user-selectable parameters, with exposure compensation, ISO setting and white balance as the defaults, although image quality, focusing and metering modes, sharpness, contrast or bracketing can be substituted via the main menu. It is an extremely effective system, and much simpler than the multiple function menus favoured by other manufacturers.


There are a couple of new features available in playback mode as well. Contrast and colour tone can be adjusted after the shot has been taken, and a skew-correction feature automatically corrects images of pages of text, whiteboards or other rectangular objects to make the sides parallel. 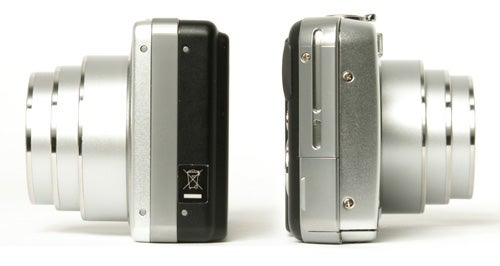 Apart from these additions, the R7 retains all of the features of the R6, including eleven scene modes with face detection in portrait mode, two user-defined shooting modes, and a 30fps VGA movie mode, although like the R6 the zoom lens cannot be used while filming. It also has the same Ricoh-designed moving-sensor image stabilisation system.

The R7’s overall performance is also little changed from its predecessor. It starts up in a little over two seconds, which is pretty brisk, and shuts down again in under two seconds. The AF system is also very quick in good light, focusing in a fraction regardless of range and zoom setting. In lower light it slows down noticeably, but its low-light focusing is very reliable, and with the bright AF assist lamp it has no trouble focusing in the dark at a range of several metres. As with the R6, shooting speed is extremely impressive. In single-shot mode it can shoot over a frame a second, and in continuous mode it can manage two frames a second at full resolution and keep it up until the memory card is full. The R7 is powered by a 1000mAh Li-ion rechargeable battery, larger than the one in the R6. I couldn’t find any specific claim about battery duration, but I shot over 150 photos and the charge meter was still reading full. 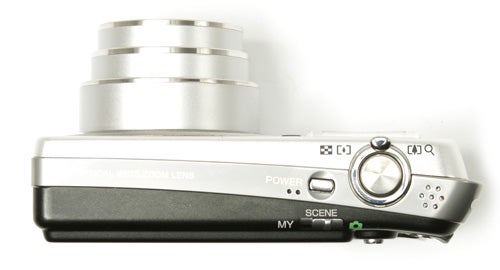 The only negative point about the R7’s performance, and one which may put some people off, is how noisy it is. I’m not talking about image noise here, but the actual mechanical noise of the camera’s operation. Power-up, zooming and focusing are all accompanied by loud whirring sounds as the motors and cogs inside the camera spin. It is far louder than any comparable compact, and it makes the camera sound a bit clunky and primitive, when nothing could be farther from the truth. 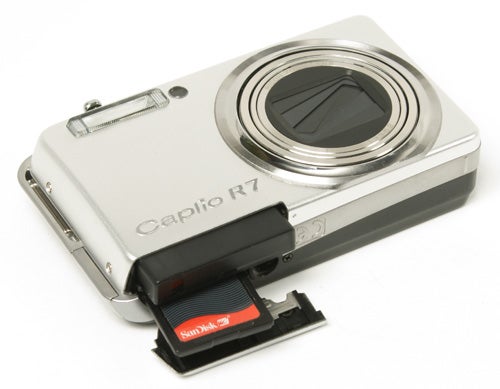 With the higher resolution sensor and new processing engine, image quality is also improved over the already impressive R6. The 256-segment metering provides very accurate exposures, although where it reached the limits of its dynamic range I found it tended to burn out highlights in order to keep shadow detail. Default colour rendition is also a little more highly saturated than is usually the case, but a quick adjustment in the menu provided a more naturalistic tone. The overall level of detail is very good, although no better than I would expect from an 8MP camera, but once again it is the lens that is the stand-out feature, providing excellent corner-to-corner sharpness and detail across the focal length range, with virtually no barrel distortion at all at wide angle, and only the tiniest hint of chromatic aberration in the corners of the frame. Noise control at higher ISO settings is also excellent, with usable images right up to 800 ISO.

Once again Ricoh demonstrates that in terms of technical ability and value for money, its cameras are among the best on the market. The Caplio R7 is an outstandingly versatile pocket compact with an unmatched list of features. It is stylish, well made, has blindingly fast performance and excellent picture quality, at a price that beats its few competitors. If it doesn’t sell like hot cakes this Christmas then Ricoh needs to fire its advertising agency. 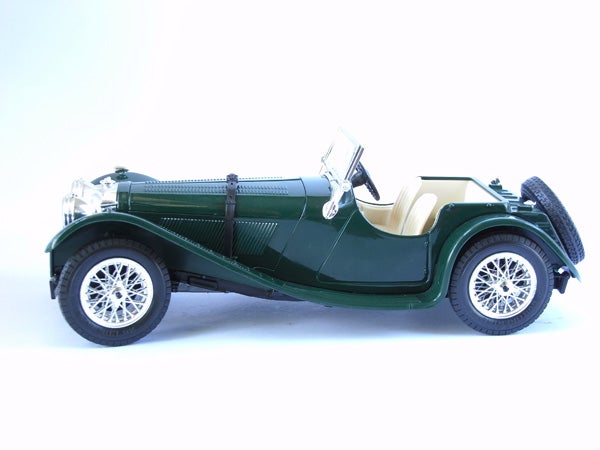 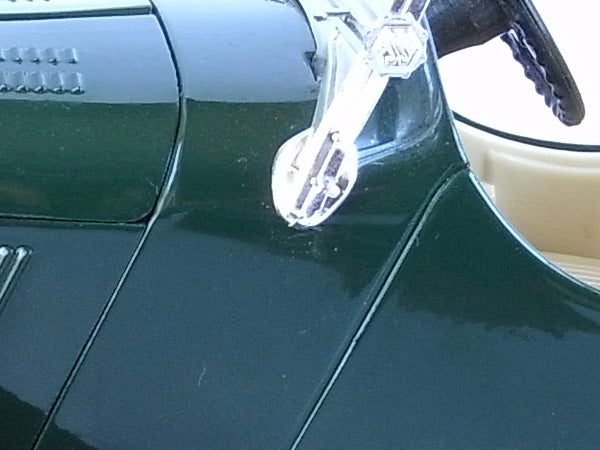 This shot 64 ISO is slightly over-exposed, but the overall image quality is very good, with no image noise at all. 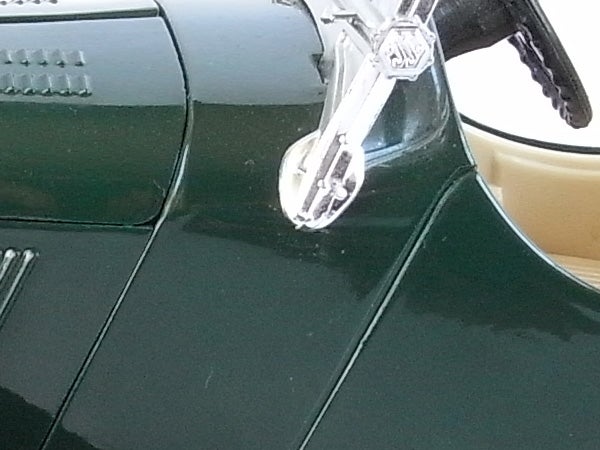 The exposure is more accurate this time, and at 100 ISO there is still no image noise. 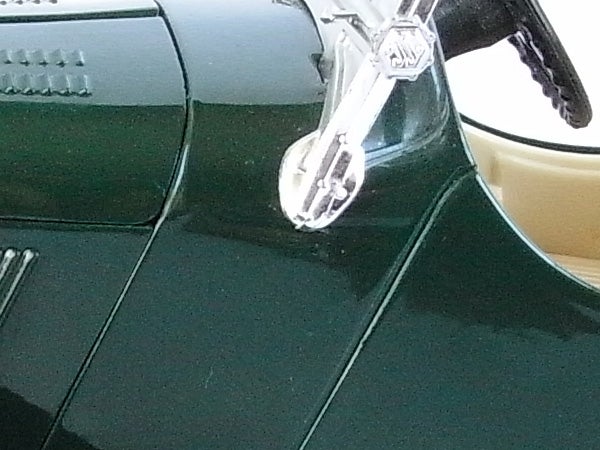 Noise levels are still very low at 200 ISO, with just a little luminance noise in the mid-tones. 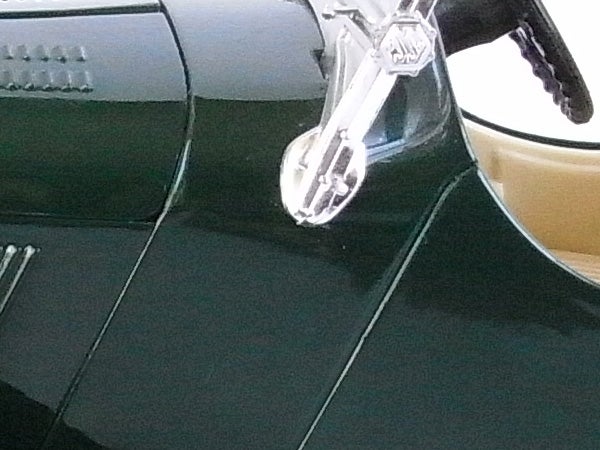 400 ISO and it’s starting to look like a very impressive performance from the R7, with only a little fine-grained noise at this setting. 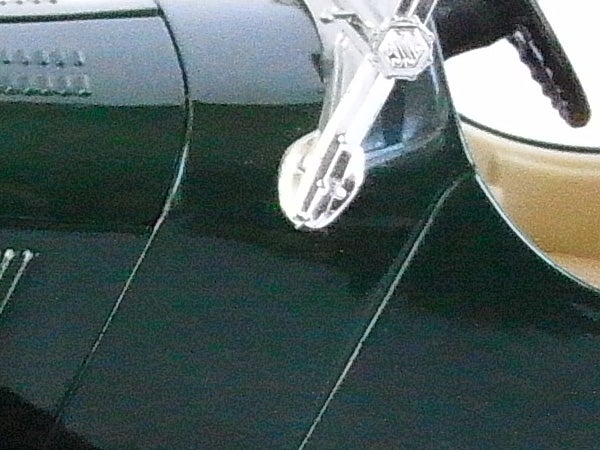 Even at 800 ISO the image is quite printable, with good colour balance and very little obtrusive noise. 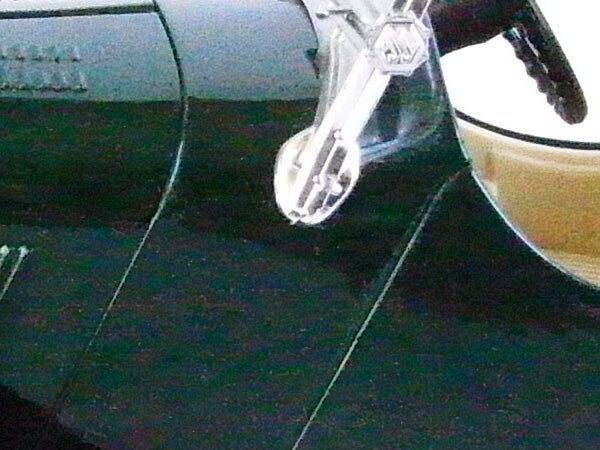 Image quality does drop off at the maximum 1600 ISO, with a lot of colour noise and a shift in the overall colour balance. 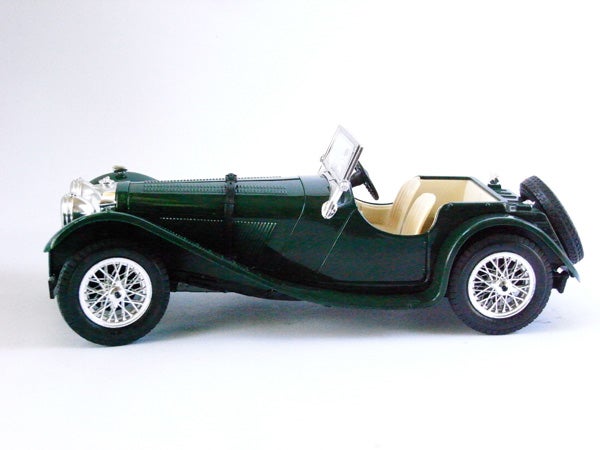 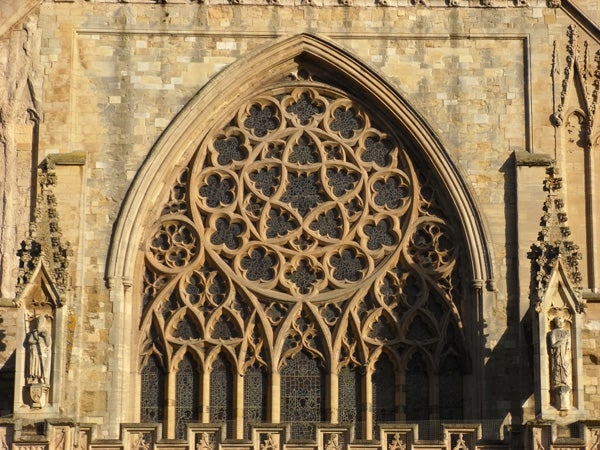 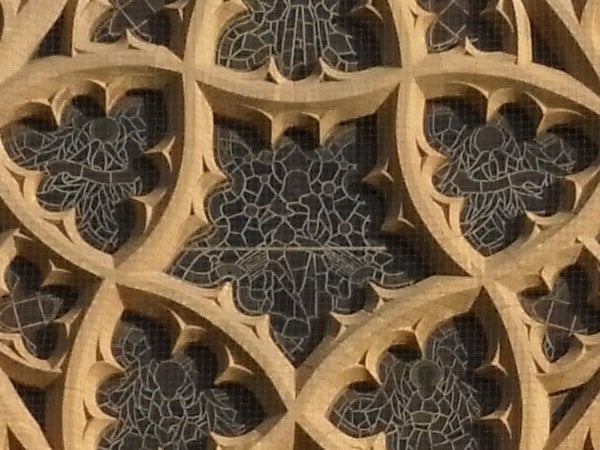 The overall level of detail is good, but no better than most 8MP cameras. 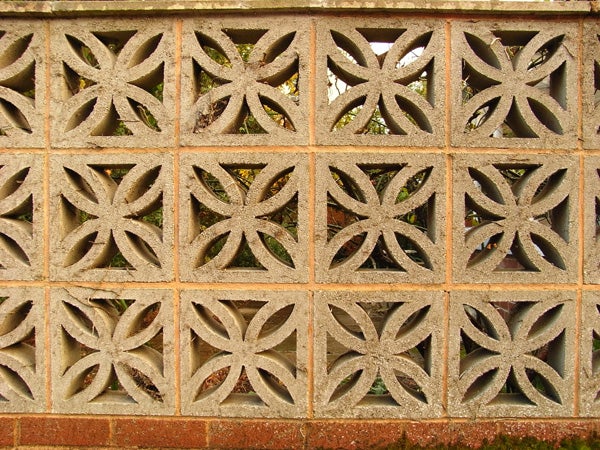 The Ricoh lens performs superbly, with hardly a trace of barrel distortion in this wide-angle shot. 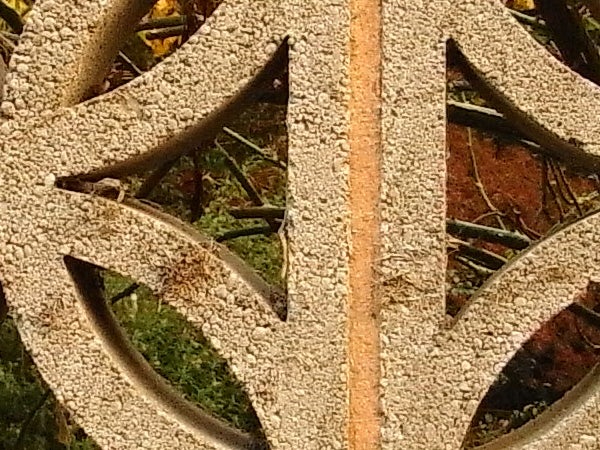 Sharpness at the centre of the frame is very good. 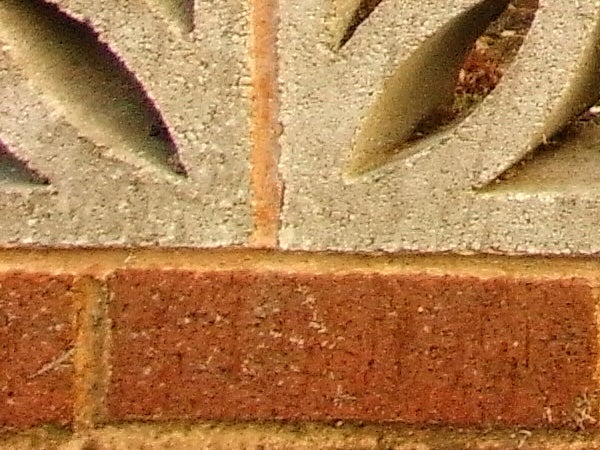 Sharpness is still good at the edges of the frame, although there is a slight hint of chromatic aberration. 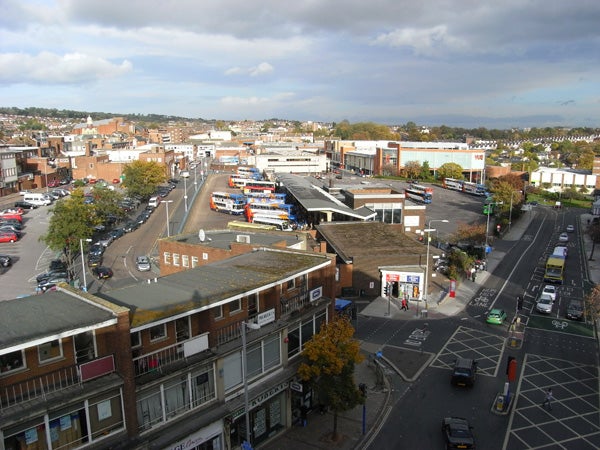 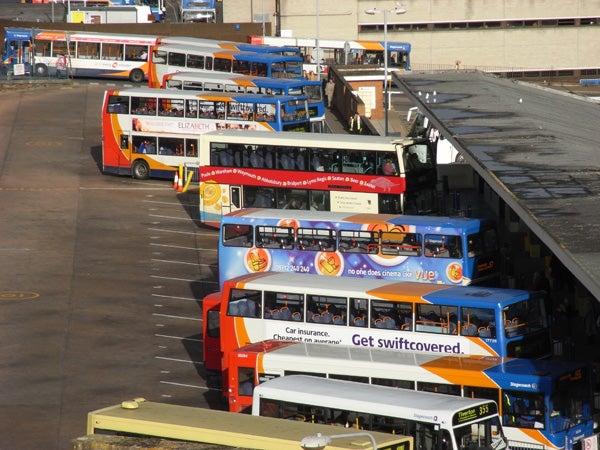 …and even fewer that also have a 200mm-equivalent telephoto end. 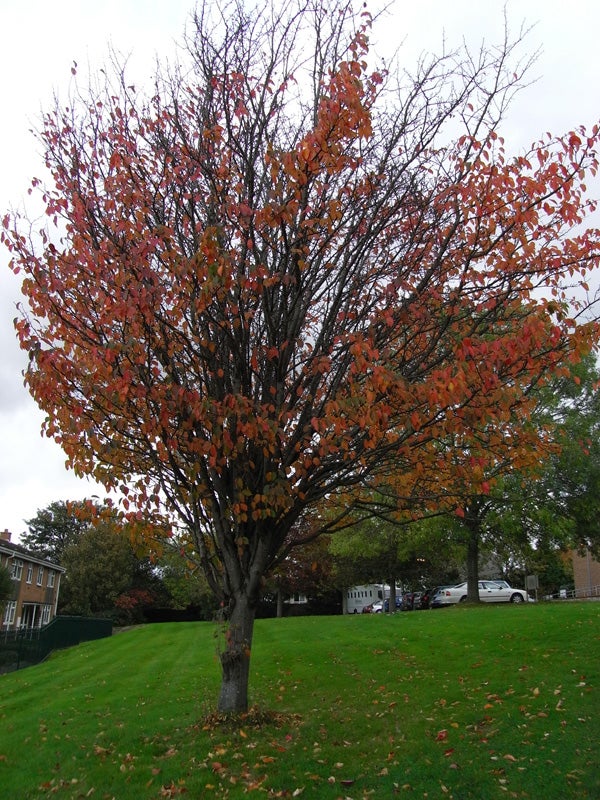 Colour rendition is very good thanks to the new processing engine. 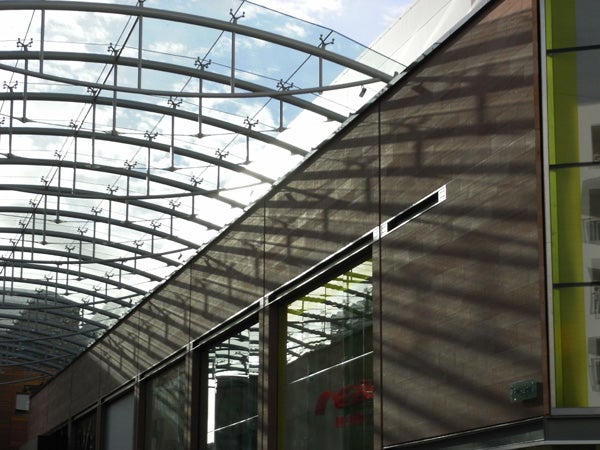 The exposure system tends to burn out highlights in order to keep shadow detail. 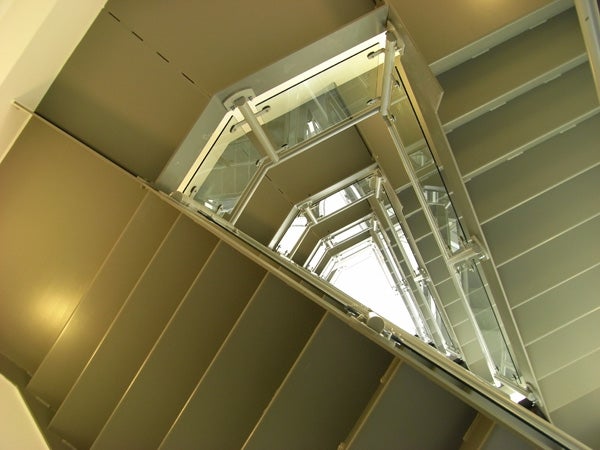 The versatile zoom range allows for some creative control.