In December last year I reviewed what was then Ricoh’s new flagship model, the excellent 7.0-megapixel Caplio R5, featuring a 7.1x zoom lens with a focal length range equivalent to 28-200mm, Ricoh’s own moving-CCD image stabilisation system and a nice high resolution monitor. I was suitably impressed by its combination of performance, features and image quality as well as its outstanding value for money. 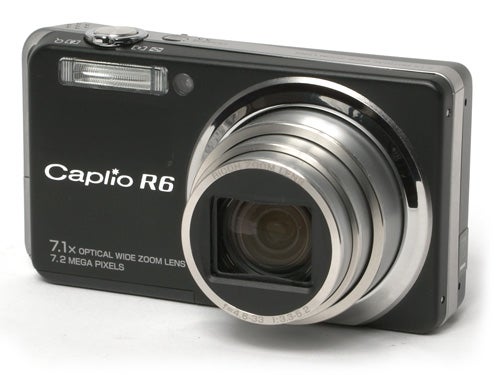 However the digital camera market moves very quickly, so just four months later the R5 has been superseded by the R6, which combines all of the features of the R5, adds the latest must have gizmo face detection technology, and somehow manages to cram the whole lot into a compact new body, measuring just 99.6 x 55 x 23.3mm and weighing just 161g including battery and card.


There are few cameras on the market at the moment that even come close to the R6’s specification, and none that can match it on price. It is currently available for just £224.95, which is significantly cheaper than the broadly similar Panasonic TZ3 at £250. The TZ3 has a longer 10x zoom range (28-280mm equiv.) but is both larger and heavier, and has a smaller, lower resolution monitor. 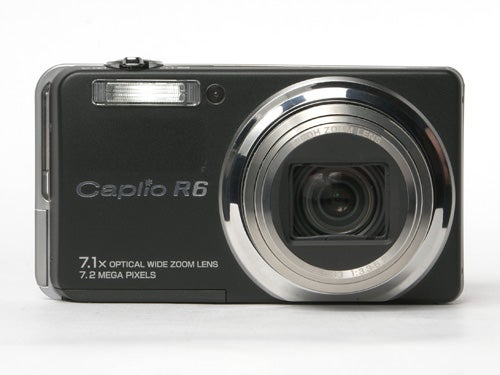 From the moment I got the R6 out of the box I was impressed. Previous Ricoh cameras have been very good, but the styling has always struck me as being a bit industrial. Not so with the R6; the all-metal body is beautifully designed, with some nice touches such as the strap lug and port hatch integrated into the trim on the right end, and the subtly sculpted shape of the thumb-rest area on the back, with its comfortable rubber grip. The control layout is excellent, with everything within easy reach for one-handed operation, but managing at the same time to avoid being cluttered. The zoom control is a rotary collar around the large shutter button (a massive improvement on the R5’s fiddly little rocker switch), and the only controls on the back are the D-pad and four small buttons, so despite the camera’s relatively small size there’s plenty of room for even those with large fingers to hold the camera securely.

The R6 is absolutely loaded with features, most of them genuinely useful. The three basic shooting modes are selected via a simple slider switch on the top panel. In the standard green mode you have access to the extensive list of menu options, including five focus options (multi-point, spot, manual, snap and infinity), three metering options, adjustable sharpness and colour depth, three continuous shooting modes, auto bracketing including white-balance bracketing, interval shooting, long exposure (up to 8 seconds), and the ability to record images at two different sizes simultaneously. As well as this substantial list, there is a user-programmable quick adjustment button with default settings of exposure compensation, white balance and ISO setting, as well as flash mode and the stunning 1cm-range macro mode selected via the D-pad. 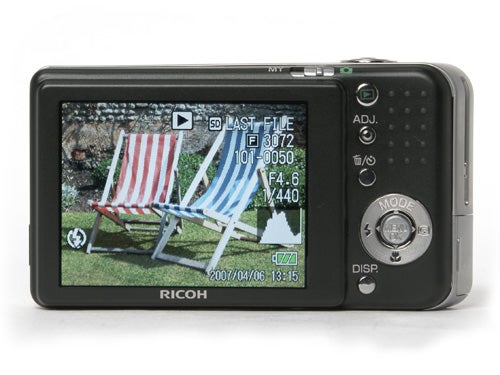 In scene mode even more options become available, including all the standard options such as portrait, landscape, sports and night scene, but also high-sensitivity mode for flashless low-light shooting, a digital zoom macro feature for extreme magnification of very small objects, a skew correction mode for copying documents (also available in playback mode), and of course face detection portrait mode. The movie mode is also found in this menu, offering VGA shooting at 30 frames per second.


The third shooting mode is an option to set up two personalised custom settings, although with this many features available in standard mode it hardly seems necessary. 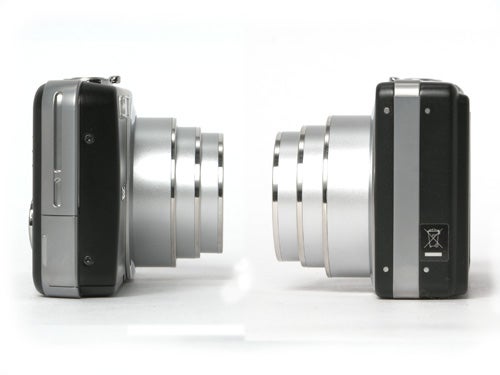 There are relatively few compact digital cameras around with a minimum focal length equivalent to 28mm, and fewer still that combine it with a 200mm-equivalent telephoto, giving the R6 great photographic versatility, capable of both wide-angle panoramic shots and pulling in distant objects. Ricoh’s CCD-shift anti-shake system is very effective, reliably providing at least two stops worth of extra stability when shooting hand-held at slow shutter speeds. I was able to take good sharp photos of a band in a dimly lit bar, at a shutter speed of 1/8th of a second without the flash, simply bracing my elbows on the back of a chair.

The camera’s overall performance is also very impressive. It starts up in approximately two seconds, which is very quick for a super-zoom camera, and shuts down again even more quickly. In continuous shooting mode it is so fast I thought I must have set it up wrong, but no, it really can shoot at over two frames a second in full resolution and keep it up until the memory card is full. The image stabilisation system is inactive in continuous mode. 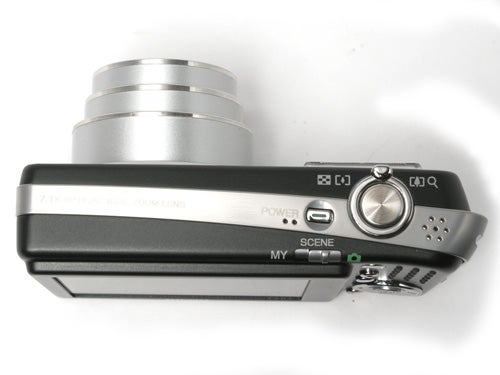 The AF system is a bit noisy, making an audible whirr as it focuses, but it is impressively quick and accurate, locking focus almost instantly in good daylight. Low light focusing is also very good, thanks to a bright AF assist lamp, a feature that was missing from the R5.


The R6 is powered by a 1000mAh Li-ion rechargeable battery, for which Ricoh claims 330 shots on a full charge. I took around 170 shots while I was testing the camera, including about thirty with the flash, and the battery indicator was still showing a full charge when I’d finished, so this claim is probably accurate. As for storage capacity, the R6 has a big 54MB of internal memory, more than double that of the R5, and enough for 34 full-res shots. A 1GB SD card provides enough storage for approximately 352 shots. 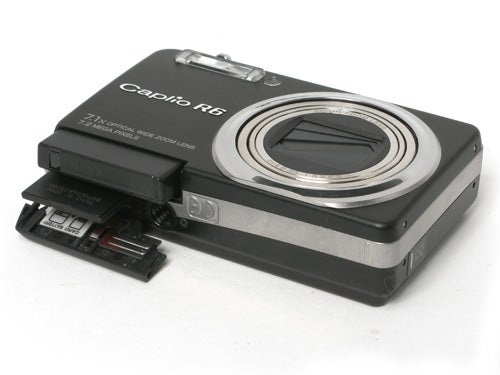 One or two previous Ricoh cameras have been let down by inferior image quality, but this is not the case with the R6. Despite its compact design the lens performs extremely well, producing very little distortion at the wide angle end with good corner sharpness. In almost all exposure situations the metering system performed superbly, coping with high contrast, backlighting, bright colours and low light with equal precision. There was a small amount of purple fringing visible on some high-contrast shots with burned-out highlights, but very little compared to some other cameras, and none at all on most shots. High ISO noise control was also generally good, I would say slightly above average for its class. From 64-200 ISO there was very little noise even on long-exposure shots, 400-800 ISO were noisy but usable, while 1600 ISO was quite noisy and best avoided, as is usually the case.

The Ricoh Caplio R6 is a fantastically versatile all-round camera, an improvement in almost every way on the already impressive R5, offering a winning combination of style, build quality, performance and image quality. It is loaded with more features than almost any other camera on the market, and certainly more than any other in its price range. I would happily buy a Caplio R6 myself. 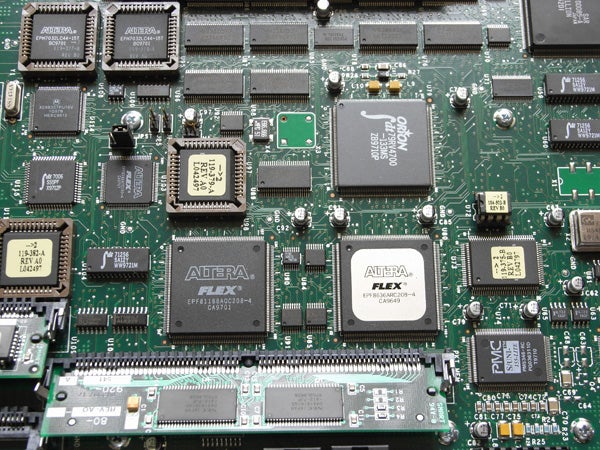 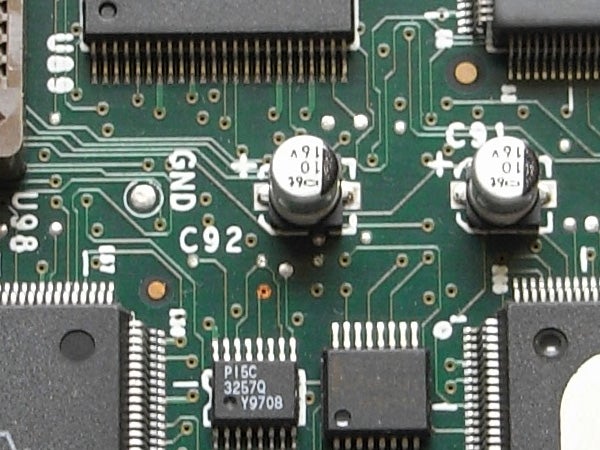 64 ISO and the R6 produces a beautifully smooth image with no noise at all. 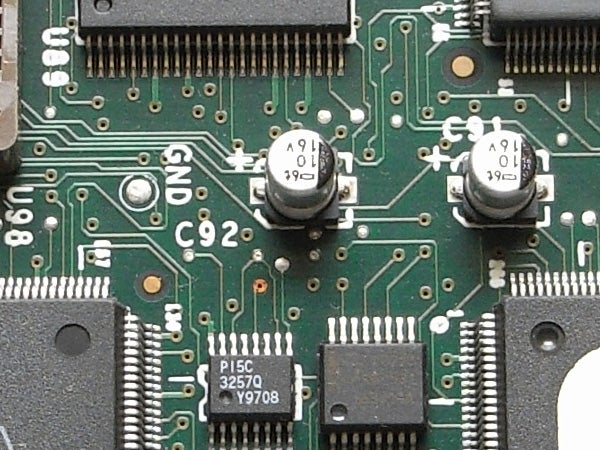 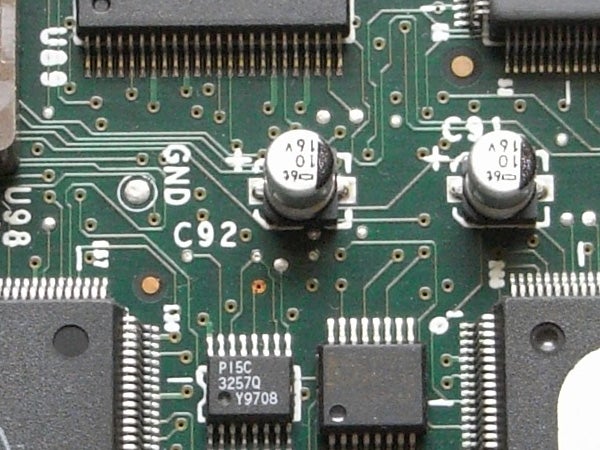 200 ISO and the image is still largely noise-free. 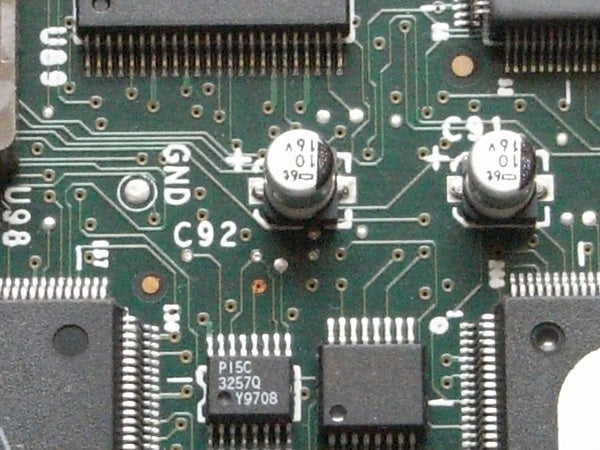 400 ISO and there is now visible noise in the mid-tone area and some colour speckling in the darker areas. 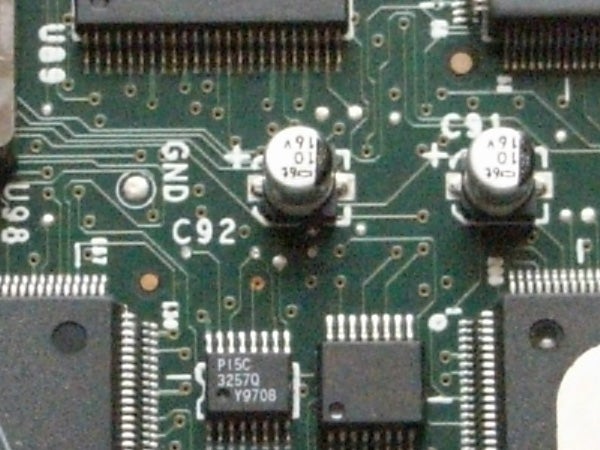 At 800 ISO there is now quite a lot of image noise all over the image, but the level of detail is still quite high and the picture is usable. 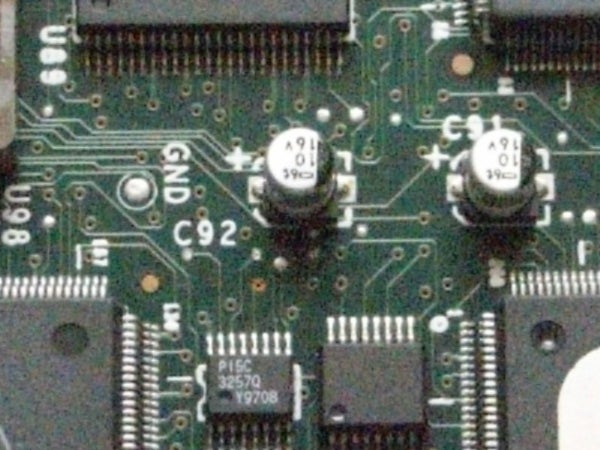 At the maximum 1600 ISO the noise is quite coarse grained, and although the colour and detail are still good this would not make a good print. 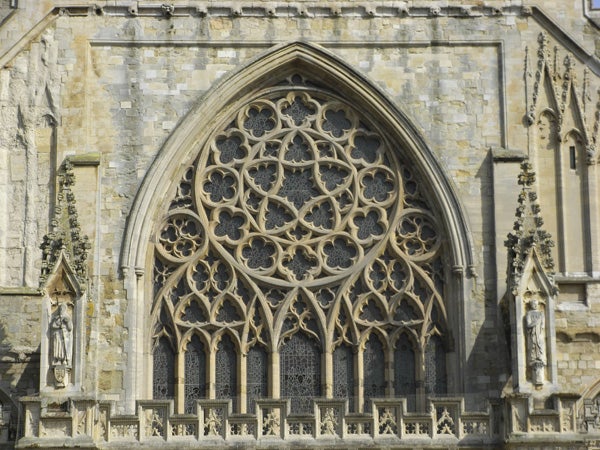 My usual detail comparison shot, the main window of Exeter cathedral. See below for a full-size crop of this image. 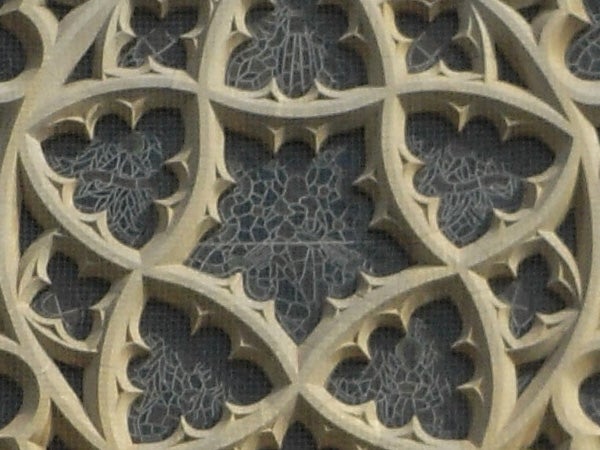 Compare this 100 percent crop with test shots from other seven-megapixel cameras. The R6 produces a good level of detail, although there are a few compression artefacts. 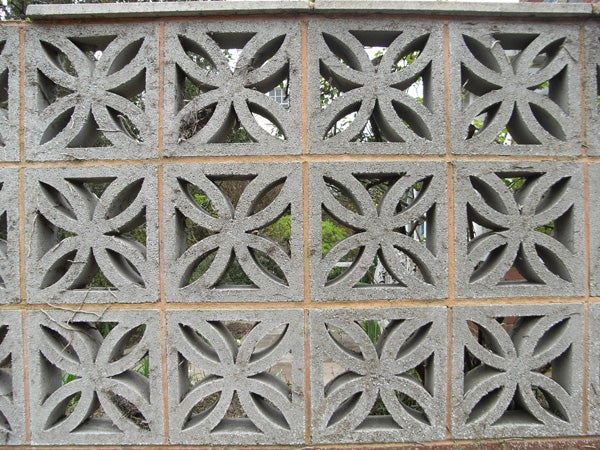 Despite its unique specification and compact size, the R6’s lens produces very little barrel distortion. However compare this to the Panasonic TZ2. 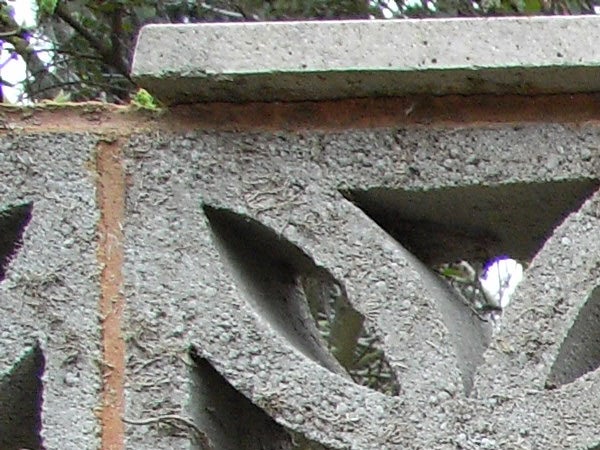 This is a 100-percent crop from the corner of the above image, showing the degree of corner sharpness. There is a little purple fringing around the highlight. 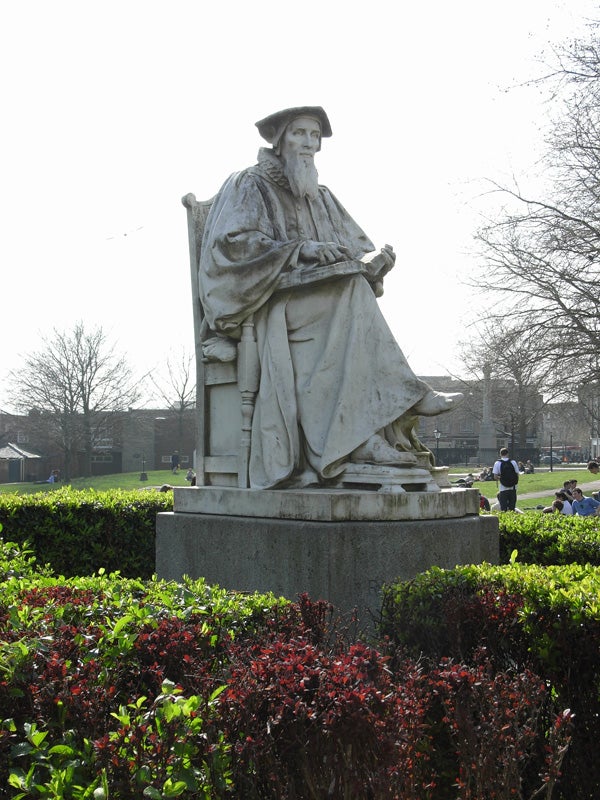 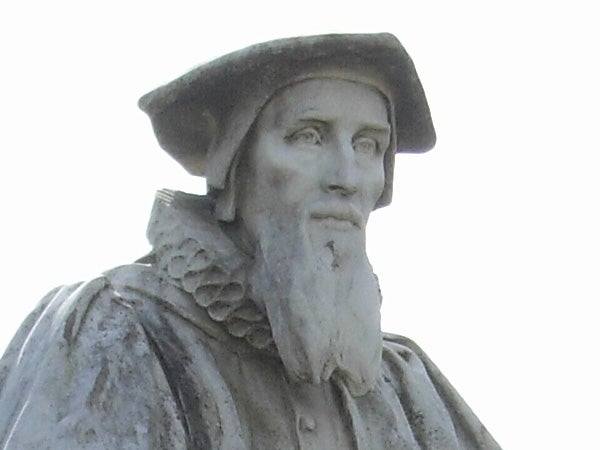 This is a crop from the image above. There is no purple fringing around the high contrast edge of the statue. 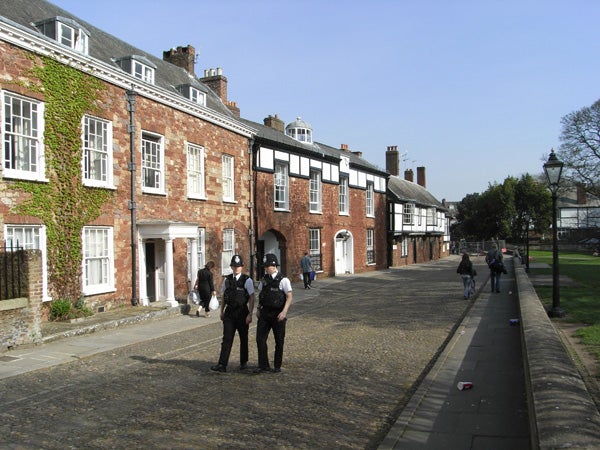 This was taken using the widest setting of the 28-200mm equivalent lens. 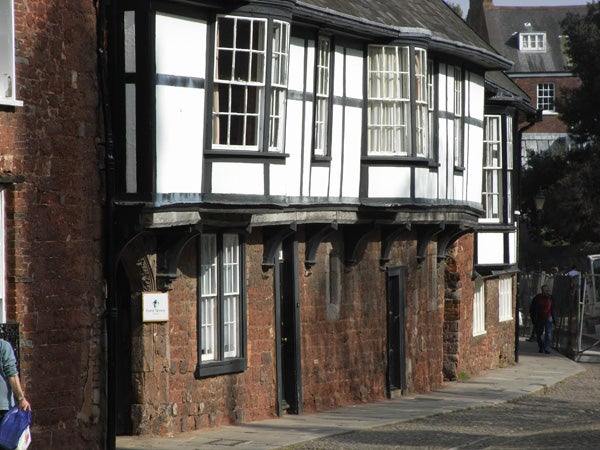 Taken from the same position as the shot above, this shows the effect of the other end of the zoom range. 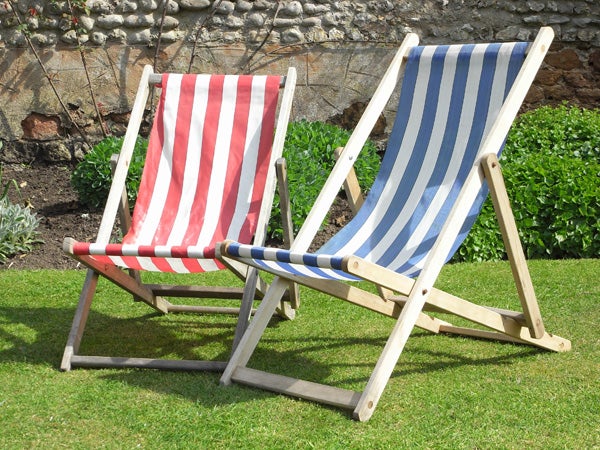 The lovely weather we’ve had over this Easter weekend was ideal for taking photos, or for just sitting around in the park. 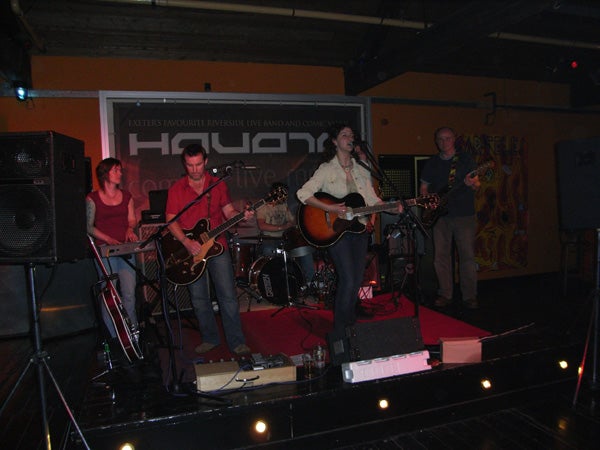 The built-in flash is a bit under-powered, but has still managed to make a good job of this shot from about three metres away. 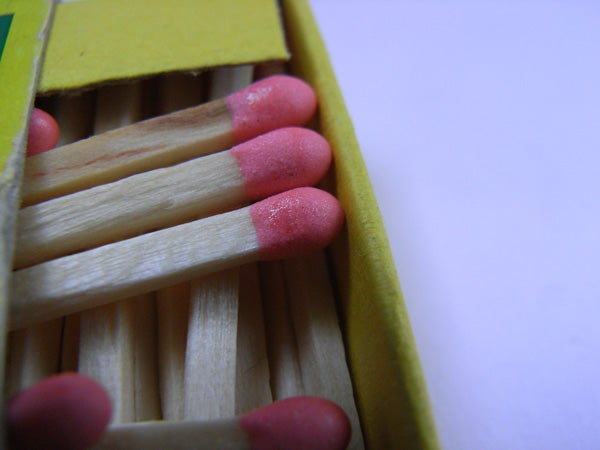 The R6 has an excellent 1cm macro range. 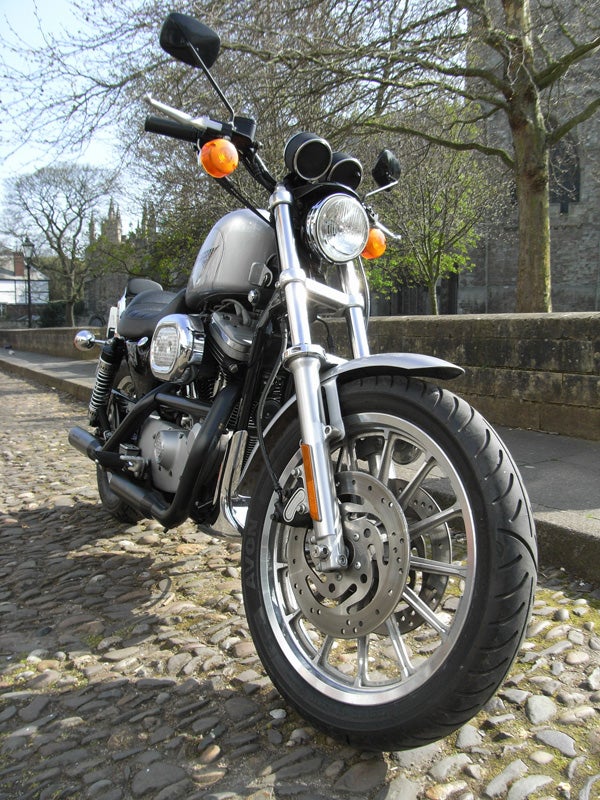 The 28mm-equivalent lens is great for getting in close to large subjects.