A little over a year ago I reviewed the Ricoh Caplio R3, and was impressed by its unique and powerful specification and outstanding value for money. Since then it has been joined in the Ricoh line up by two more cameras featuring the same high-powered compact zoom lens, unsurprisingly named the R4 and the R5.


The Caplio R5 was announced in August this year, and is now the flagship of Ricoh’s zoom compact range. It has a specification unmatched by any other compact camera on the market, offering 28-200mm-equivalent optical zoom, 7.24 megapixel resolution, 2.5in 230,000 pixel monitor, 1,600 ISO sensitivity and moving sensor image stabilisation. This is all contained in a package measuring 96 x 55 x 26mm and weighing just 140g. It has a current high street price of £249.99, but is available online for around £239. This is a little on the expensive side but compares reasonably well with what is probably its closest match, the 6x zoom Canon PowerShot A710IS. 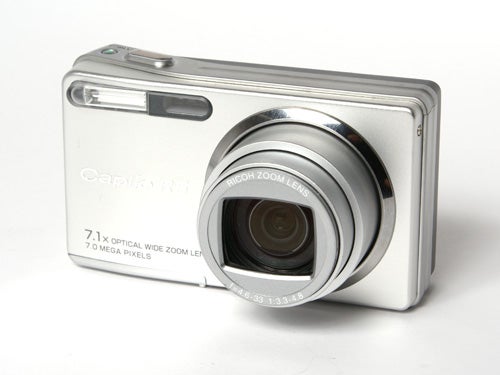 Even though it is the specification that will sell it, the R5 is also a stylish and attractively designed camera. It is available in black, red or the silver version seen here. The body is all aluminium, and the build quality and the finish are of a very high standard. Because it is so light it doesn’t feel as solid as some other high-spec compacts, but this is only comparative.


It’s not the slimmest camera in the world, but considering the size of the lens that somehow folds completely flush with the body, 26mm is quite an achievement and far from bulky. It’s certainly small enough to slip into your pocket or purse.

The overall shape of the camera is little changed from the R3, with a straight-edged rectangular profile. Like the R3 however the body is subtly sculpted at the right hand end providing a comfortable grip and an easy shape to hold. 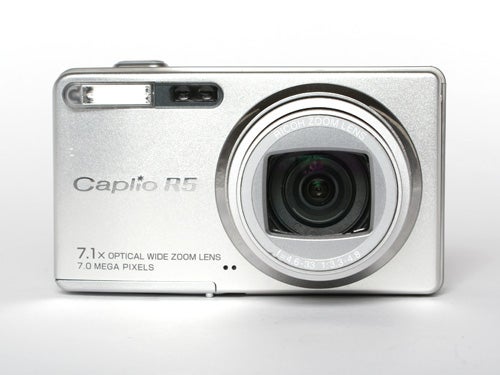 The control layout has been altered slightly from the R3, with some positive and some negative results. The zoom control has been moved to the left of the thumb rest, which does make the camera easier to hold, but it has also been made much smaller and less sensitive, which on a camera with such a huge zoom range is perhaps not the best idea.


Another small but significant change is the removal of the on/off button for the image stabilisation system. This has now been replaced with a menu option, and the system is on by default. This makes a lot more sense, since there’s little point in having such a system on a camera like this if it’s not switched on.

The image stabilisation system is Ricoh’s own in-house moving-sensor mechanism. Ricoh is only the third manufacturer to develop such a system, and the R5 is one of the smallest cameras to feature such technology. I spent some time trying different exposures and focal lengths to get some idea of how effective the system is compared to others that are available. It seems to provide at least two stops of extra hand-held stability although pushing it to three stops produced some visible camera shake. This is on a par with the performance of the IS systems in use by Panasonic, Canon and Nikon, although it’s not as effective as the Konica-Minolta system now being developed by Sony. 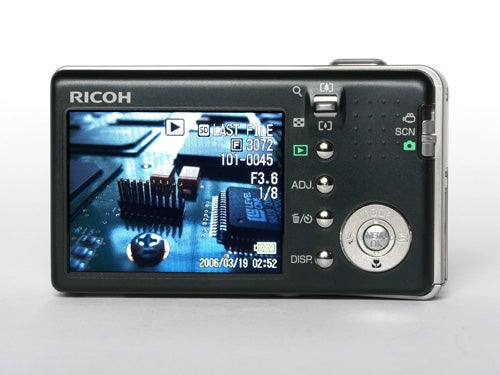 It has to be said that apart from the optical zoom, IS and high ISO, the R5 is not exactly overburdened with features. It has no options for manual exposure control, no contrast or saturation adjustment, and has only eight scene modes. However the adjustments that it does offer are easy to access thanks to a partially programmable Adjustment button. One of the scene modes is the unusual skew correction mode, which allows you to photograph documents at an angle, and then automatically corrects them to appear flat.


The camera’s performance is also a bit of a mixed bag. It starts up in just under two seconds, slightly slower than the R3 but still a respectable time. Even more respectable is the continuous shooting mode, which can fire off an average of two frames a second until it runs out of room on the memory card. This is extremely fast by any standard.


As I mentioned, the zoom control is rather small and awkward, and makes accurate framing more difficult than it needs to be, especially considering that the lens has at least twenty steps between wide and telephoto. Because of the control it is very difficult to progress the zoom a single step at a time. The zoom mechanism is also incredibly noisy, making a loud mechanical whir as it grinds in and out, which is probably why it can’t be used with the 30fps VGA video mode. 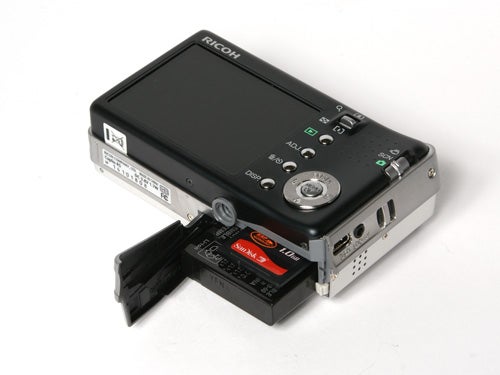 The hybrid AF system also has its ups and downs. In good light and normal range it is accurate and very quick, taking just a fraction of a second to focus. However its low light performance is dismal, a real problem since the R5 has no AF illuminator. Focusing is also very slow at close range, but in macro mode it is capable of focusing down to just 1cm in front of the lens. Very close macro focus has always been something of a Ricoh speciality, but it’s still pretty impressive.

The R5 is powered by a chunky 3.7V 1150mAh Li-ion battery which Ricoh claims is good for 380 shots. I didn’t have time to test this claim, but I took a couple of hundred shots with it, about a quarter with the flash and it was still showing a full charge. 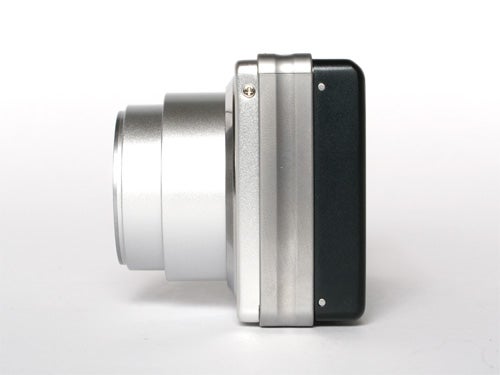 The multi-zone exposure system is also very good, coping well with a range of awkward exposures. Dynamic range is above average, and noise control is excellent up to 400 ISO and still good at 800. It is noisy at the maximum 1600 ISO, but not intolerably so. This means fast shutter speeds, and combined with image stabilisation makes the R5 a good choice for long-range action shots. It would make it good for low light photography as well if only the AF system was a little better.

Image files at the highest quality setting are around 2.5MB, giving 352 shots on a one gigabyte SD card. 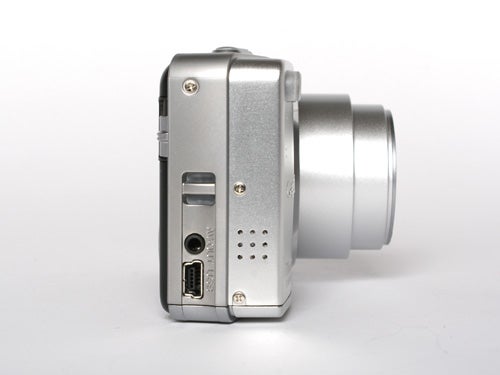 This matches the output of the Canon A710 and is significantly less compressed than the Kodak Z710. In fact image quality overall is very good, with that remarkable lens producing images that are sharp and well detailed right across the frame, with only a little blurring in the very corners and surprisingly little spherical distortion at wide angle. As is often the case with small high-powered sensors, there is significant blue fringing alongside high-contrast edges, but it’s not too obtrusive in most shots. All in all, an impressive performance from a very useful camera.


Ricoh proves once again that it can match and often exceed anything its rivals can produce. The Caplio R5 has a unique specification, combining wide angle and long telephoto abilities, effective image stabilisation and a usable high ISO setting, with good image quality and outstanding performance. Its only weak point is its poor low light focusing ability. 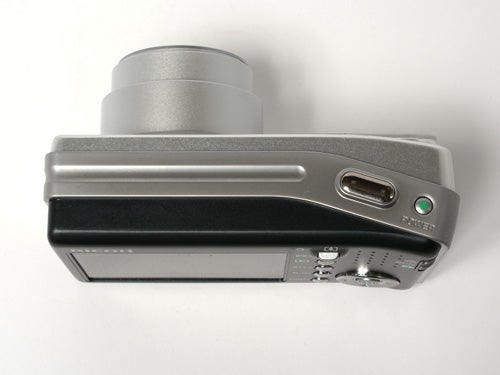 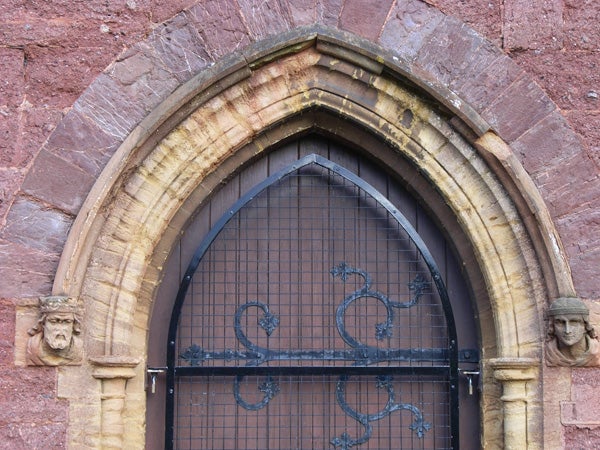 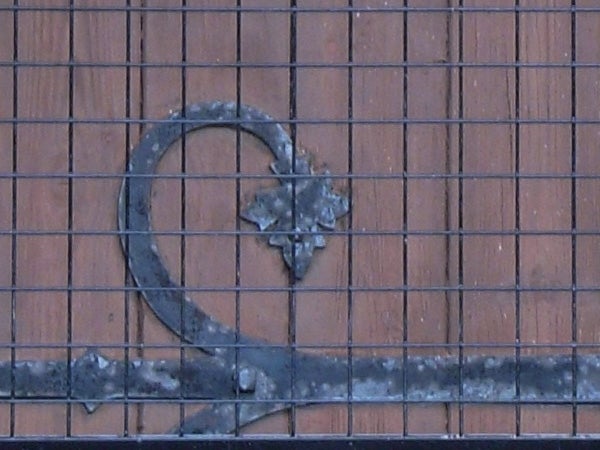 At the lowest ISO setting the image is, as one should expect, clear and noise free. 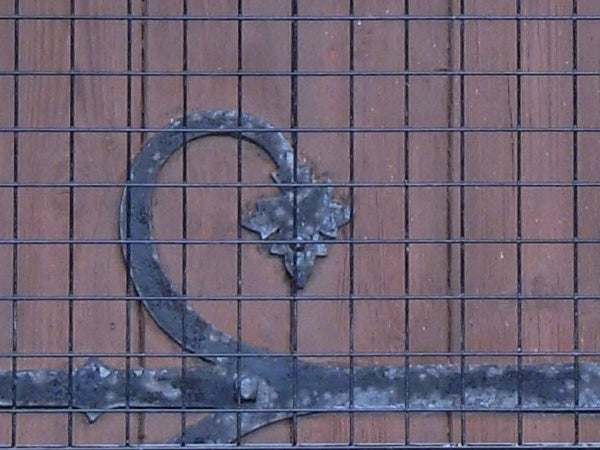 Just 1/3rd of a stop faster at 100 ISO the image is still completely noise free. 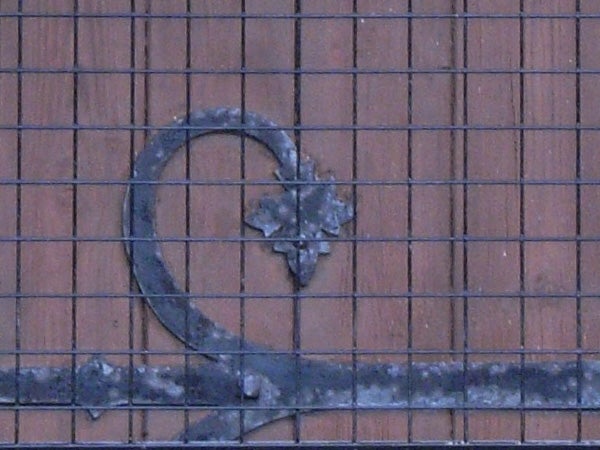 At 200 ISO the image is noise free, but there is some evidence of noise reduction at work. 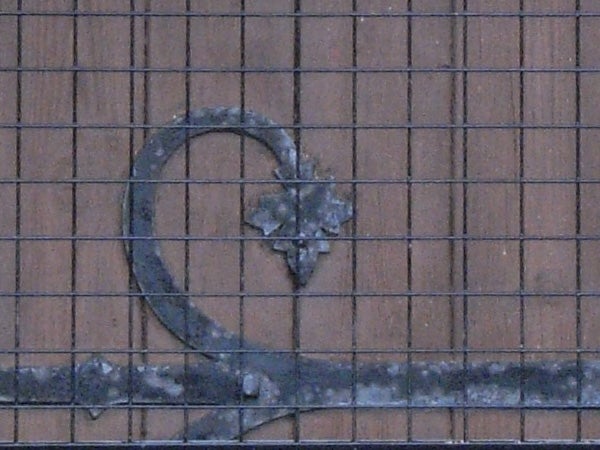 At 400 ISO there is some detail reduction due to noise reduction, and just a faint speckling of noise. The contrast level is lower too. 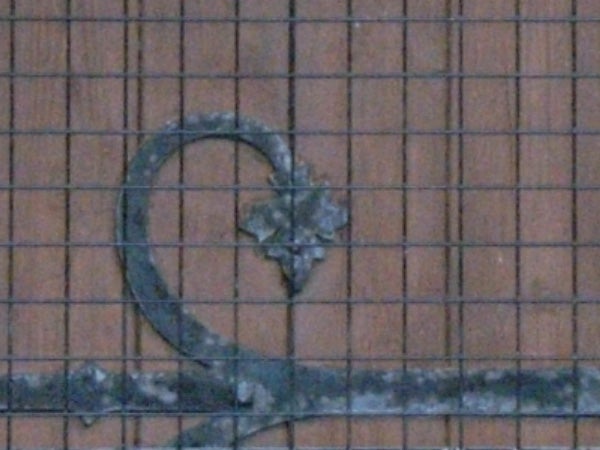 At 800 ISO there is significant loss of fine detail and the image looks slightly soft, but is relatively noise free and would print well. 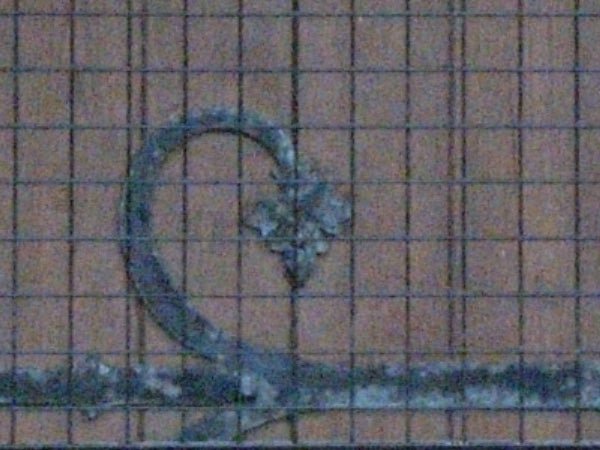 At the maximum ISO setting there is noise right across the image, but it is smooth and well controlled with little colour distortion. This image is quite usable. 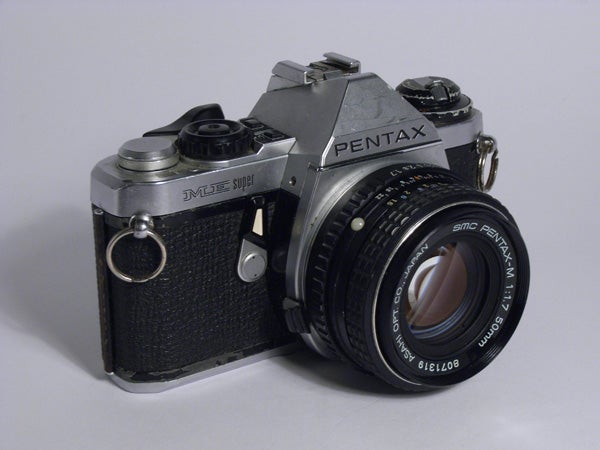 To test the image stabilisation system, I took this shot hand-held using tungsten light at a range of focal lengths and shutter speeds. 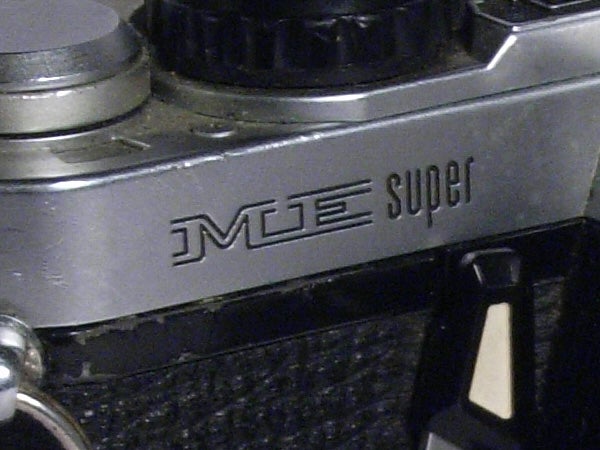 Shooting at 1/17th of a second at a focal length of 10.9mm (equivalent to about 70mm) is 2 stops below the recommended hand-held speed, but the IS system has produced a nice sharp shot. 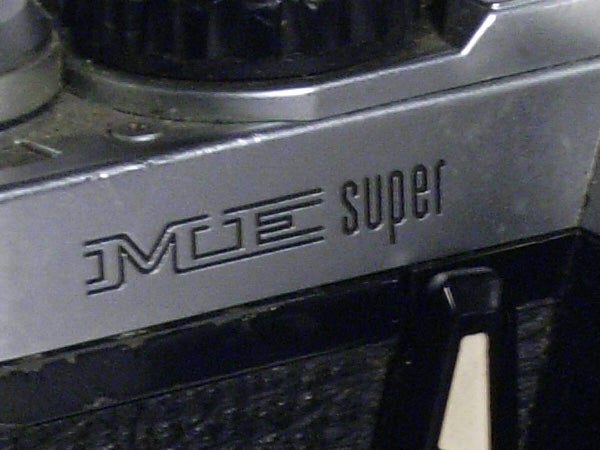 Shooting a 1/25th of a second at 33mm (equivalent to 200mm) is 3 stops too slow. This time the IS system can’t cope and the image is blurred by camera shake. 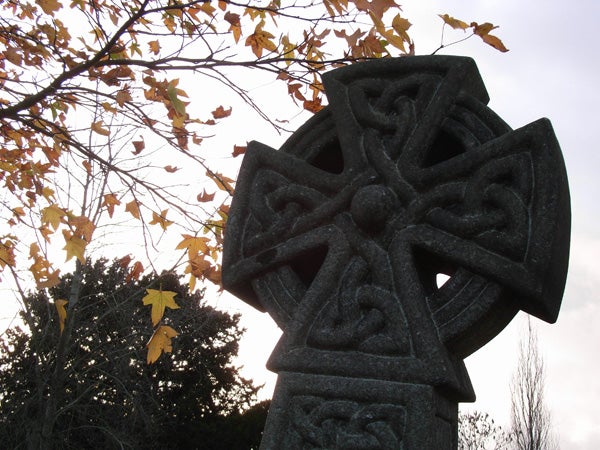 The metering system has coped well with this high contrast shot, preserving good shadow detail and some highlight detail, although there is some blue fringing. 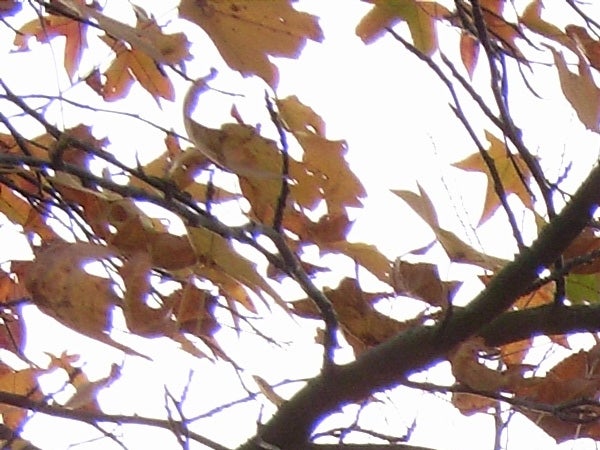 This is a 100% crop of the top left corned of the previous shot, showing the blue fringes along the edges of the burned-out sky areas. To be fair most high-res compacts do this. 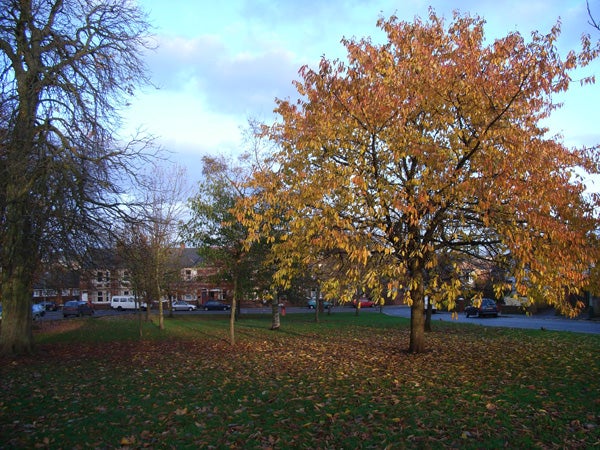 The wide end of the R5’s zoom range is equivalent to 28mm, wider than most other compact zooms. 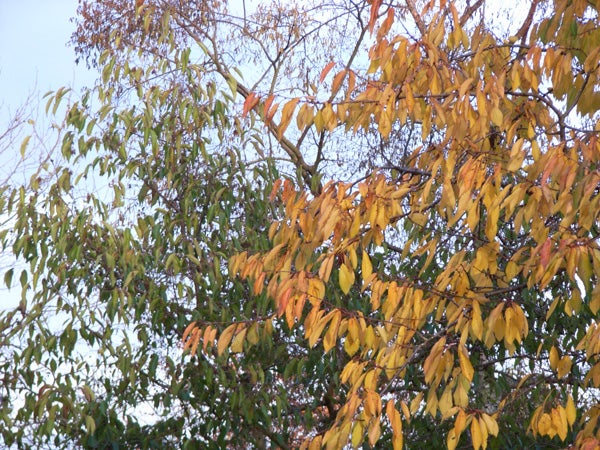 The 200mm-equivalent telephoto end is also far above average, great for picking out details in a scene 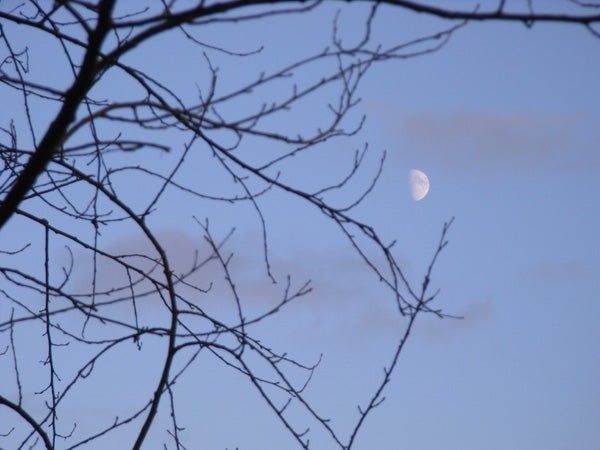 With the focus set on infinity, and the camera on a tripod, the 200mm lens can pick up detail on some very distant objects. 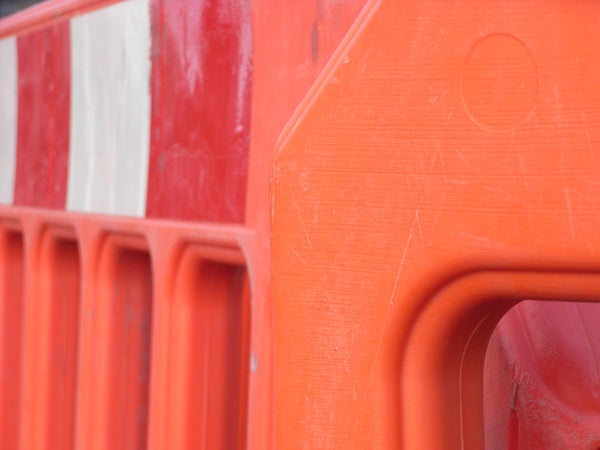 Even large areas of bright colour don’t confuse either the light meter or the auto white balance. 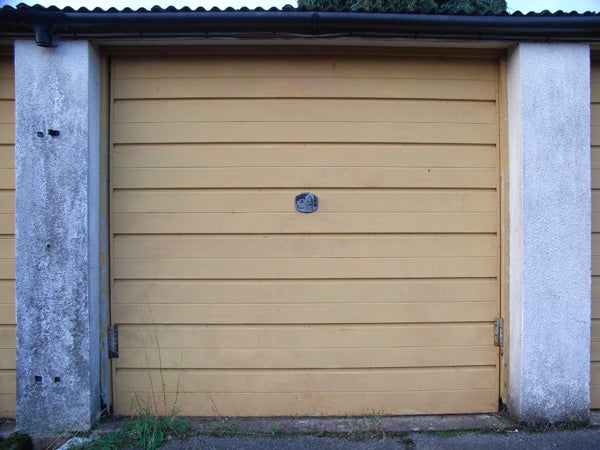 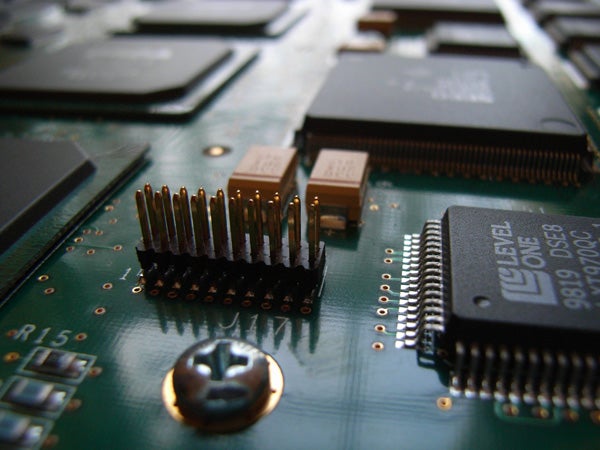 The R5 has a remarkable macro mode, producing excellent close-up images at a range of just 1cm.