In departmental office environments one of the key requirements is print speed and as printer makers know this it’s one of the main features determining price. As the throughput speed increases the price goes up steeply. Ricoh’s Aficio SP 4100N is a large workgroup or small departmental mono laser with a claimed speed of 31ppm.


The printer has a fairly conventional layout with a large, 500-sheet paper tray at the bottom and a further, 100-sheet multipurpose tray which unclips and folds down from the front panel above. You have to know just where to press it, though, as the click-open, click-closed catch doesn’t respond unless you press directly over it. 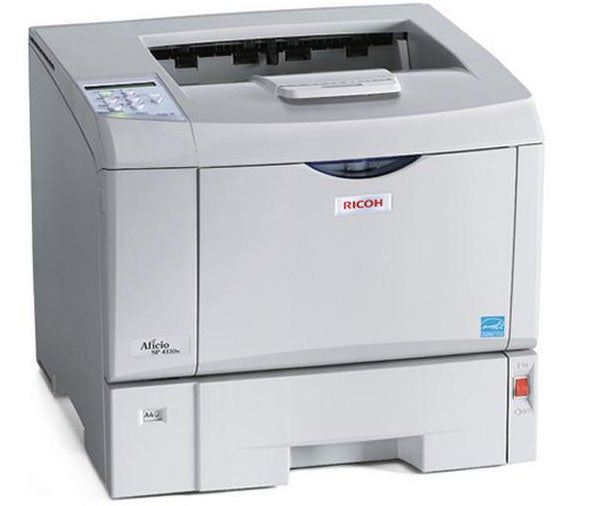 The printer’s control panel is remarkably easy to use, as its eight buttons are well labelled in English, rather than relying on sometimes obscure icons and the two-line LCD display is completely horizontal and has a good backlight.


The printer comes with USB and 10/100 Ethernet as standard interfaces and you can add Gigabit networking and Wi-Fi as options. It’s a bit surprising that duplex printing isn’t included as standard on a machine at this price, but a duplexer is an option, along with two more 500-sheet paper trays, an envelope feeder, a hard drive and extra memory.


A single-piece drum and toner cartridge slides in from the front, once the front panel has been folded down. You shouldn’t have to do this often, though, as the standard capacity of the cartridge is 15,000 pages. The maintenance kit, which is needed every 90,000 pages, is the only other consumable. 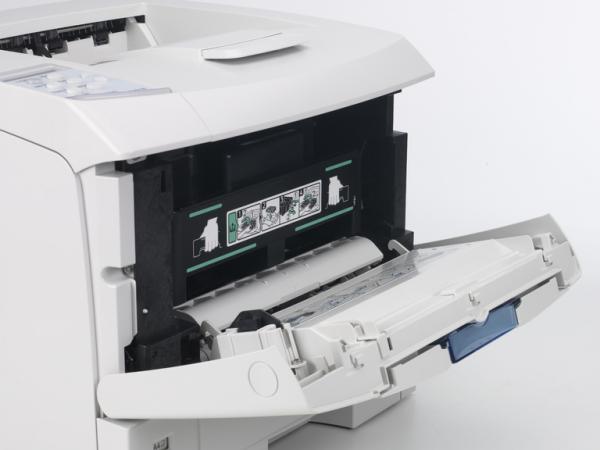 
The driver itself includes support for up to 16 pages per sheet, watermarks and user code entry, so only those with valid authority can print to the machine. There’s no facility for walk-up printing from a USB stick, though, which is becoming an increasingly common feature.

Ricoh rates the Aficio SP 4100N at 31ppm, which is a very respectable speed for a mid-range business laser. In our tests we saw our five-page text print complete in 18 seconds and the five-page text and graphics print in 15 seconds. This gives a top speed for small documents of around 20ppm, though this excludes a five second wake-up time, if the printer is in Energy Save Mode.


Increasing the print run to 20 pages gives a time of 48 seconds, or 25ppm, so the printer gets quite close to the manufacturer’s specified speed. Printing our photo sample took just 10 seconds, but the quality of the print, even at the machine’s maximum resolution of 1200 x 600dpi, wasn’t good.


A lot of the greyscale detail was lost, with many of the darker tones veering to black and obvious micro-banding showing in areas of sky. There was also a paler, vertical band through the image and the machine’s ability to reproduce photos is called into question. 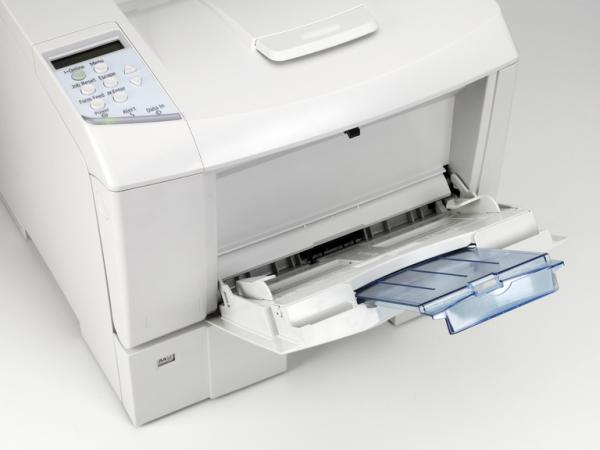 Business graphics also suffered from the micro-banding and some greyscale tones again reproduced too darkly. Straight black text was fine, with clean characters and smooth curves and diagonals, but if a £400 mono laser printer couldn’t produce good black text, it really would have problems.


Ricoh doesn’t quote noise level in its spec sheet, or another useful parameter like duty cycle, but we measured it at peaks of 62dBA, which is quite loud, but no worse than many office photo copiers.


The two consumables for the Aficio SP 4100N are the drum and toner cartridge and the maintenance kit. Neither is cheap, but both have high capacities, giving a cost per page of 1.99p, including 0.7p for plain paper. This print cost is slightly on the high side, around 0.2p per sheet more than competitors we’ve tested recently.


The high capacities of both the cartridge and maintenance kit mean service costs should be low, but in this price bracket, the difference between replacing consumables every 8,000 or every 15,000 pages aren’t deal breakers.


There are plus points in the make-up of Ricoh’s Aficio SP 4100N, like its respectable speed, built-in Adobe PostScript and PDF interpreters and the high capacity of its consumables. However, the poor print quality, for anything other than black text, ranks against this and the printer’s not particularly cheap or feature rich. Functions such as walk-up printing can add a lot to the value for a printer being shared in a workgroup or department and when you can get them for the same price as this Ricoh machine, it moves it down the shortlist.