The Aficio GX e3350N is like a second-generation machine, although looking much the same as earlier models. It includes duplex printing as standard, relatively high-yield ink cartridges and a turn of speed that could separate it from the pack. 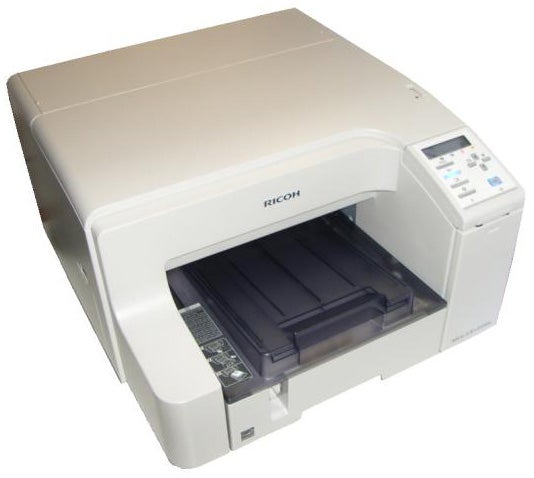 It’s a big machine for an inkjet but, although it looks different, the design is quite similar to recent models from HP and Epson. So, for example, paper feeds from a single tray at the front, containing up to 250 sheets, and out to a tray moulded into its cover, making a 180-degree turn during the process. An optional, 100-sheet multipurpose tray can be fitted to the back of the printer to take special media.


The four ink cartridges slide into holders behind a fold-down cover on the right and are connected to a wide-swath print head via flexible tubes. The control panel includes a 2-line by 16-character LCD display, with no backlight, but it’s still relatively easy to read. There are nine buttons for menu navigation and key functions, such as paper feed. The whole panel hinges up to latch in two alternative positions if this makes reading the display easier. 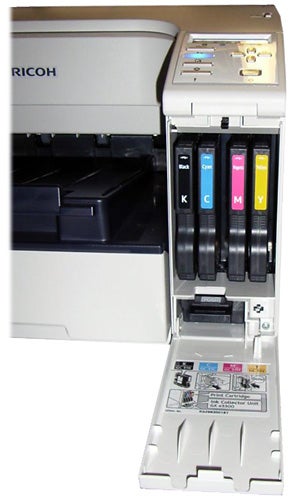 At the back are USB and network sockets, though unusually the USB socket is positioned high on the back panel, leaving the cable to hang. Setting the machine up involves plugging in the four ink tanks, loading the tray with paper and installing a driver from the supplied CD. There are drivers for both Windows and OS X, though Ricoh makes no mention of Linux support.


Speed is one of the strong points of the Aficio GelSprinters and our five-page black text document completed in 34 seconds, a speed of 8.82ppm. The 20-page document increases this slightly to 9.84ppm, but the most interesting result was the five-page black text and colour graphics test, which hardly slowed at all and gave 7.89ppm. We can’t think of another printer costing under £150 which can match this.

The Gels print technology is even more intriguing with duplex print, where the paper makes a 180-degree turn during printing. Because the ink is that bit more viscous, it dries quicker and there’s very little delay between printing the first and second sides of each page.


In fact, the paper feeds back through without any noticeable pause and our 20-page document, printed as a 10-page, 20-side double-sided test, produced a speed of 8.63 sides per minute, nearly as quick as the single-sided equivalent. This is a very good speed for a printer in this price bracket and rivals duplex laser printers costing a lot more. 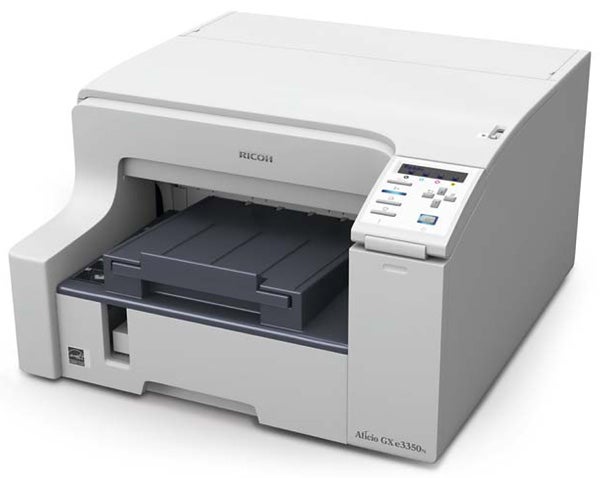 Although Ricoh doesn’t recommend specific photo papers for this printer, we successfully used Epson Premium Glossy Photo paper, designed for its own pigmented inks, with the Aficio GX e3350N. Our test photo print reproduced well, though the dither pattern in the image was obvious – more so than in the plain paper prints, completed in Normal mode. Colours are reasonably natural and detail is still apparent in darker areas of the image.


A colour photo print on plain paper also reproduced reasonably and this machine would be suitable for printing materials such as estate agent particulars, including colour photos.


Plain colour graphics are bright and dense, with little sign of any patterning and good registration of black text over colour backgrounds. Black text is reasonable for day-to-day correspondence, though there’s some infill of small-looped characters like ‘a’s at small point sizes, particularly when text is emboldened. 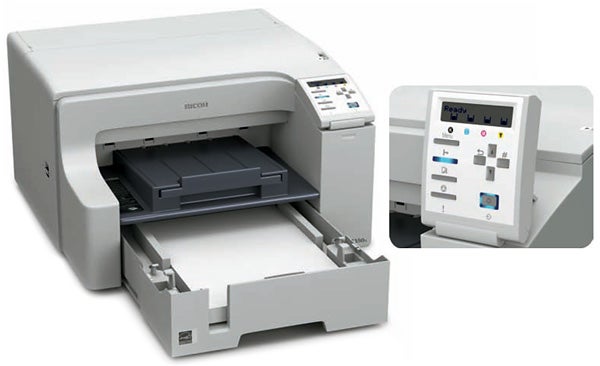 Although the four ink cartridges are relatively costly, averaging £43 for the colours and £25 for black, they have high yields, with the black cartridge claimed to be good for 1,920 ISO pages and the colours yielding around 1,700 each. This gives a cost per page of 2.12p for black print and 9.65p for colour, including 0.7p for paper in each case.


The black print cost is low for a machine costing less than £200, but the colour print cost is higher than most, so the machine is most economical when used primarily for black print. Given its speed and relatively high yields, this is likely to be where it’s used, anyway.


The GelSprinter technology is starting to show its value in this machine. The Aficio GX e3350N is around £100 less than the GX3000s was when we reviewed it, making the newer printer a much better proposition. Its strengths are speed, particularly when printing double-sided documents, ease of maintenance and low black text print cost. It’s particularly good at printing colour without slowing down and for typical small business tasks gives a very good account of itself, at a very competitive price.