The next Professor Layton?
We sometimes forget that the Nintendo DS didn’t win its success through blockbuster franchises or even new Mario games alone, but through a whole series of slightly odd, leftfield titles that took gaming out to a wider audience.

Cast your mind back to Nintendogs, Brain Training, Elite Beat Agents, Hotel Dusk, Phoenix Wright: Ace Attorney, Ghost Trick and – most of all – the Professor Layton games. These weren’t all hugely successful at first, but with time they built a cult following, and in some cases something more than that. Sadly, the 3DS hasn’t been so fortunate this far. While the likes of Super Mario 3D Land, Mario Kart 7 and Resident Evil: Revelations mean it’s no longer short of big name hits, it hasn’t yet had much in the cool and quirky line. 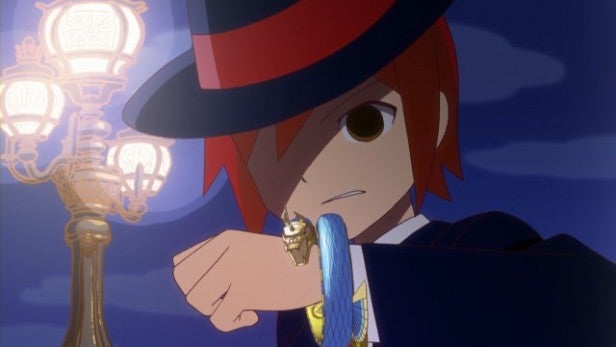 With a bit of luck, Rhythm Thief and the Emperor’s Treasure might turn that around. It’s a deeply lovable and peculiar rhythm action/puzzle game from Sega, which looks and plays like a bizarre mash-up of Elite Beat Agents and Professor Layton. Like the latter, it takes place in a weird Japanese fantasy of France, with a crazy historical-conspiracy storyline, puzzles and a cast of close-to-certifiable characters.

Like Elite Beat Agents, it’s a game where the fundamental element is rhythm. Whether you’re fleeing the cops or sneaking through the Louvre in search of a mysterious bracelet, it’s all about pressing buttons or swiping the screen in time with the beats.

Introducing Phantom R
The star is Raphael – a.k.a. Phantom R – a young man with a missing dad, a love of fine art and some serious dance moves.  Accompanied by his faithful hound, Fondue, he’s searching the streets of Paris for clues to his father’s disappearance.

Not only does he have the police on his tails, but his quest brings him into contact with an orphan girl, a gang of crazed knights, and a man who claims to be the Emperor Napoleon. Oddly, this all gels together better than you might think. 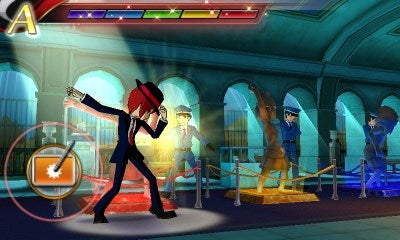 The gameplay takes two basic forms. In the first you wander around the map of Paris, meeting other characters and solving simple puzzles. Many of these revolve around recording a sound in one place and playing it back in another, but there are also some fairly easy logic puzzles to be polished off. While you’re admiring the scenery for each location on the bottom touchscreen, you can also give it a poke to find hidden coins, secret strings of musical notes or additional sounds to record, all of which key into bonus objectives. 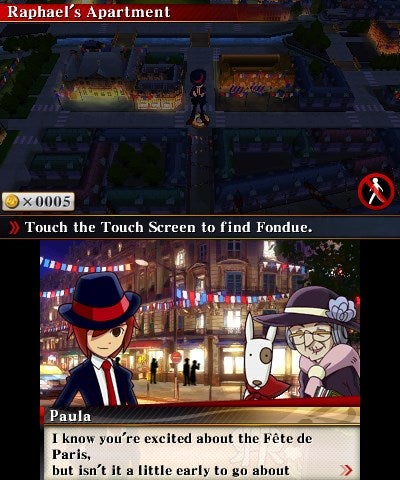 Feel the Beat
However, specific locations or actions will trigger an action sequence. Here Rhythm Thief gets clever. Where Elite Beat Agents was all about tapping and sliding on the screen, Rhythm Thief likes to mix and match approaches. One sequence might see you swiping left, right, up and down or in a circle to pull off specific dance moves, or plate up meals in an over-stretched restaurant.

Another has you tapping the D-Pad and the A button to fend off enemies attacking from the left and right, or even tilting the 3DS left and right in time with the music to dodge the blows from an elderly bodyguard. Whatever you’re doing, it’s all about timing, and the game has visual cues to help you along. At the same time, though, it’s a game where music really matters. Only by tracking and anticipating notes and beats can you hope to win through, let alone get a decent rating when the sequence ends.

To be brutally honest, there’s nothing really that special about the
gameplay. In some form, you’ve probably seen and done it all before. The
rhythm action sequences are perfectly paced and the difficulty level
scales up nicely, but the puzzles are weak and the game insists on using
prompts and whacking exclamation marks on the map to practically solve
most of them for you.

Sequences involving the tilt controls can be
frustrating, particularly as the 3DS doesn’t always recognise the
forward-tilting motion, and in a few cases even the stylus controls feel
hit and miss. 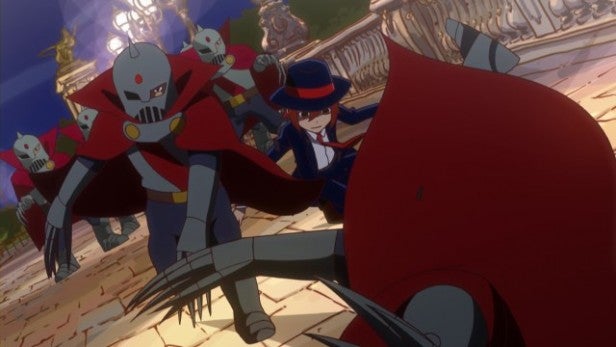 Enter Professor Layton – Style and Sophistication
Yet Rhythm Thief gets away with this on account of its style. Like Professor Layton, it has the bright and breezy looks of a Studio Ghibli film, and it makes a lot of the City of Lights and its eccentric inhabitants. The game skilfully blends hand-drawn 2D art with cel-shaded 3D animation, and there’s some excellent, restrained use of 3D effects both in cartoon cut-scenes and the action sequences.

There’s also plenty of knowing humour, and a whole lot of simple, silly fun. Just as it was impossible to dislike Elite Beat Agents – a game where you helped a little doggy find his home to the tune of Deep Purple’s Highway Star – so it’s improbable that anyone could not enjoy Rhythm Thief.

One minute you’re engaged in a football duel with your would-be nemesis, a child prodigy PI, the next you’re raising glasses and offering hors d’oeuvres at a waiting masterclass or ensuring that Fondue gets his teeth into a chubby policeman’s posterior. It’s infectious stuff. 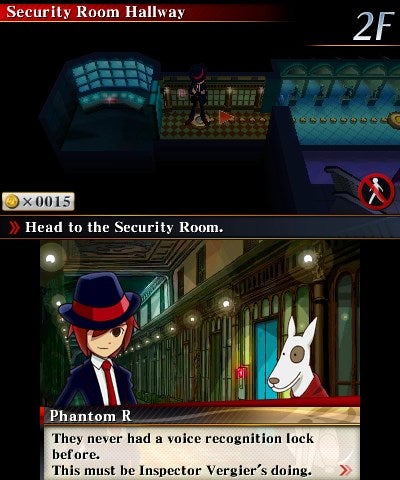 One Last Jazzy Score
The music, meanwhile, is inspired. Where most rhythm action games shoehorn current hits and old classics into the storyline, Rhythm Thief has its own soundtrack, mixing the odd disco beat in with the kind of jazzy sounds you’d find in a sixties spy movie. It’s genuinely catchy, in a cheesy sort of way. 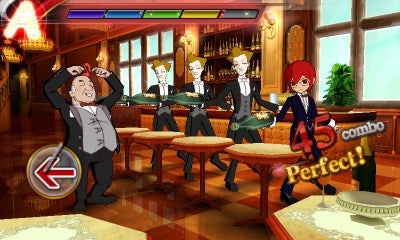 Best of all, it’s a game with unexpected long-term appeal. At the end of each action sequence you’re hit with a grade, running from A down to a miserable E. You can get so far by getting through each sequence by the skin of your teeth, but to properly finish the game you’ll need to polish your timing and build up those A grades.

This can be a pain where the tilt controls are concerned, and the game has a nasty habit of dropping you a grade for just a few isolated flunks in the final section, but most of the sequences are a pleasure to revisit. Plus, if you share your 3DS and the game with a loved one or friend, then it won’t be long before some bitter competition starts to stir.

Verdict
You might say that Rhythm Thief and the Emperor’s Treasure is a triumph of style over substance, but the substance is very enjoyable and the style extremely entertaining. It’s exactly the sort of quirky, leftfield gem that the 3DS needs, and a game that richly deserves to become a sleeper hit. Here’s to another outing for Phantom R and his faithful dog Fondue.