Overall, the RHA T20 Wireless earphones offer a pretty good package. At £200, they're expensive, putting them within range of genuine true wireless offerings, such as Sony's WF-1000XM3. They offer a good, if not quite up-to-date, feature set, but the real plus here is the audio quality.

The RHA T20 Wireless in-ears enter the market at the pricier end of the spectrum, which puts them among – as well as ahead – of some more established brands. The T20s can switch between a wireless and a wired connection, the latter for Hi-Res Audio tracks. They also boast swappable tuning filters for those who’d like to alter the level of bass or treble in their music playback.

What are the RHA T20 Wireless?

The RHA T20 Wireless are neckband wireless earphones for the more discerning listener. They cost almost as much as the true wireless Sony WF-1000XM3 at £200, so their sound quality has plenty to prove. In the main, they’re a decent set of earphones. 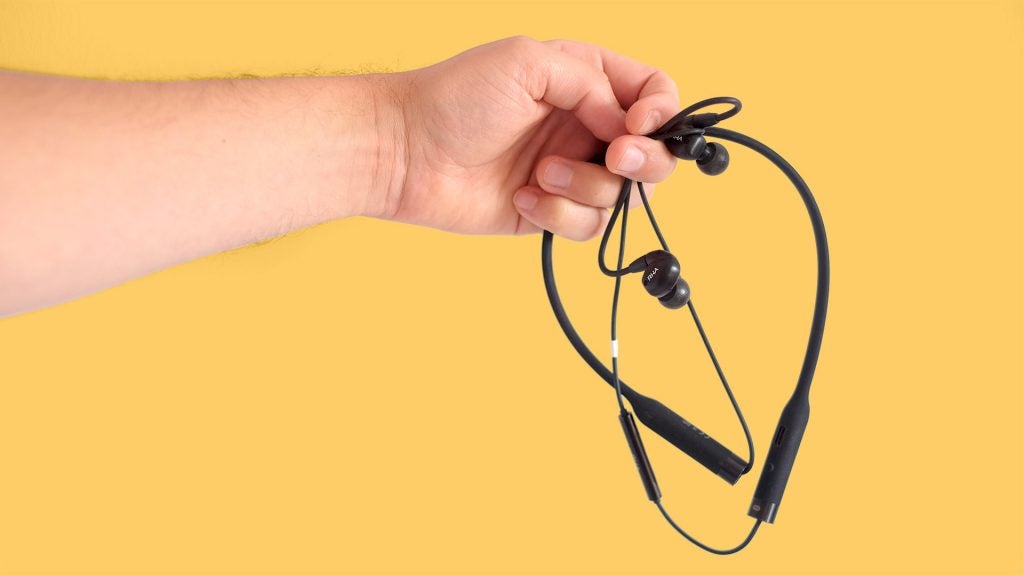 The RHA T20 Wireless are premium wireless earphones. In this case, as it is in many other areas of tech, this means their composition isn’t entirely plastic.

The T20 earpieces have injection-moulded, stainless-steel shells, which feel exceptionally tough. They also look classier than the old wired RHA T20, since there are no colour-coded collars to determine the left and right earpiece.

The cable snakes around the top of your ear – another “pro” touch that also stops them falling to the ground should they work their way out of your ear canal.

RHA does its best to avoid such instances; like other RHA pairs, the T20 Wireless come with an almost peerless array of tips. 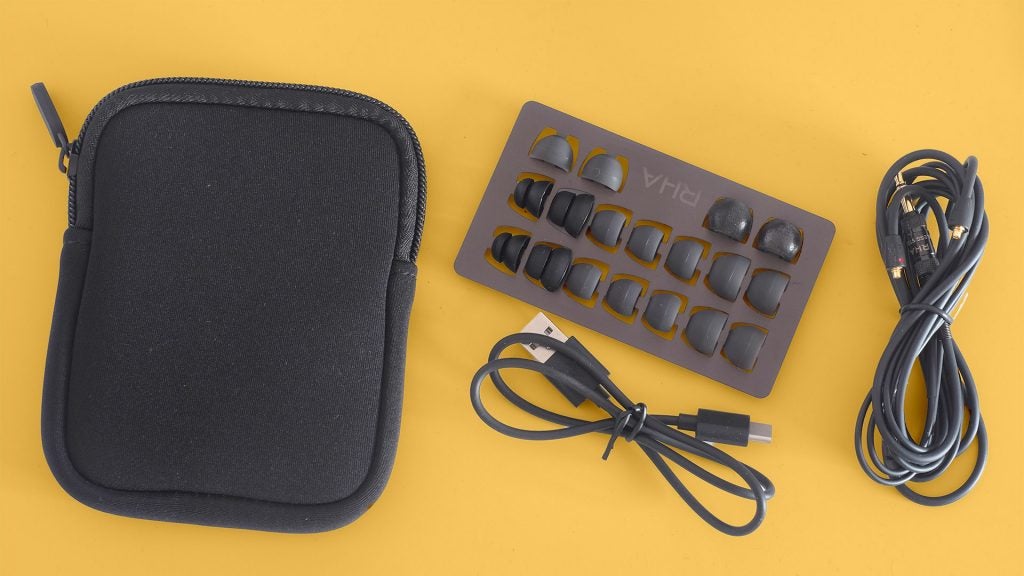 There are foam ones, standard silicone tips and dual flanged pairs. If you can’t find a set that fits then perhaps in-ear headphones aren’t for you. Saying that, there are no ultra-tiny tips.

Note that the cable is removable. Little MMCX connectors hook the neckband to the earpieces, giving the T20 Wireless an additional value angle. Shure’s RMCE-BT2 Bluetooth MMCX adapter cable costs £140 on its own, and is arguably less handy since it has a battery block that needs to be clipped to your clothing.

There’s even a “wired use” cable in the box. It’s another case of RHA being more generous than it needs to be. 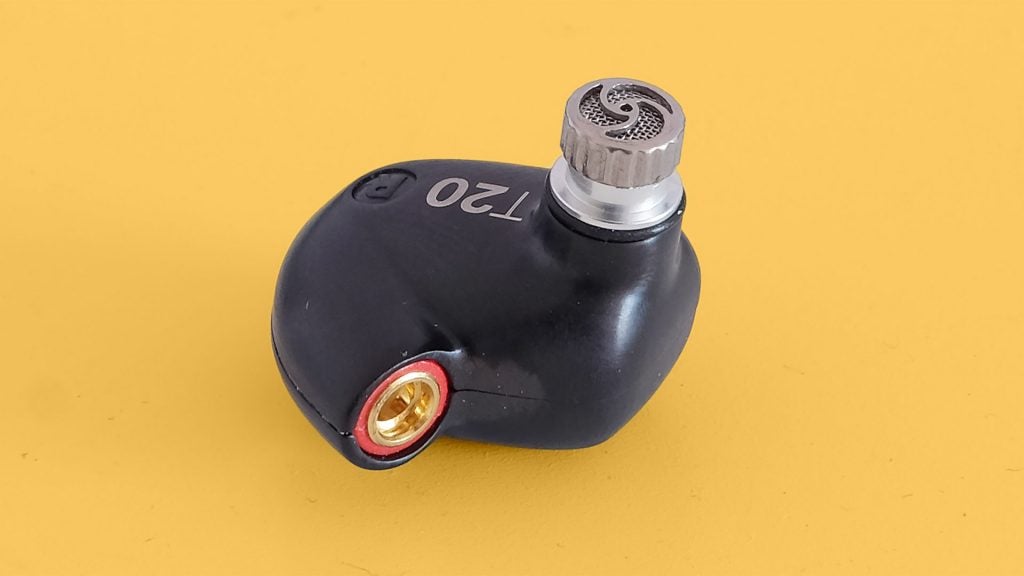 I don’t recommend the RHA T20 Wireless for use during running, though. Wear them while running and the ends of the neckband bounce up and down on your collarbone. I ended up stuffing them under my t-shirt to keep them in check.

Bounciness aside, the RHA T20 Wireless are fine for exercise. RHA says they’re IPX4 water-resistant, good enough to deal with a bit of sweat and occasional rain.

RHA T20 Wireless features – While these earphones don’t boast all the latest tech, they’ll be fine for most listeners

Tech-wise, the RHA T20 Wireless are fairly simple wireless earphones. They use Bluetooth 4.1 rather than 5.0, and support aptX for higher-quality streams – but not the near-lossless aptX HD and LDAC.

Battery life is pretty unremarkable for a neckband model, at 12 hours. Huge strides have been made in this area recently, with the SoundMagic E11BT lasting well over 24 hours, and the true wireless Sony WF-1000XM3 surviving up to eight hours. 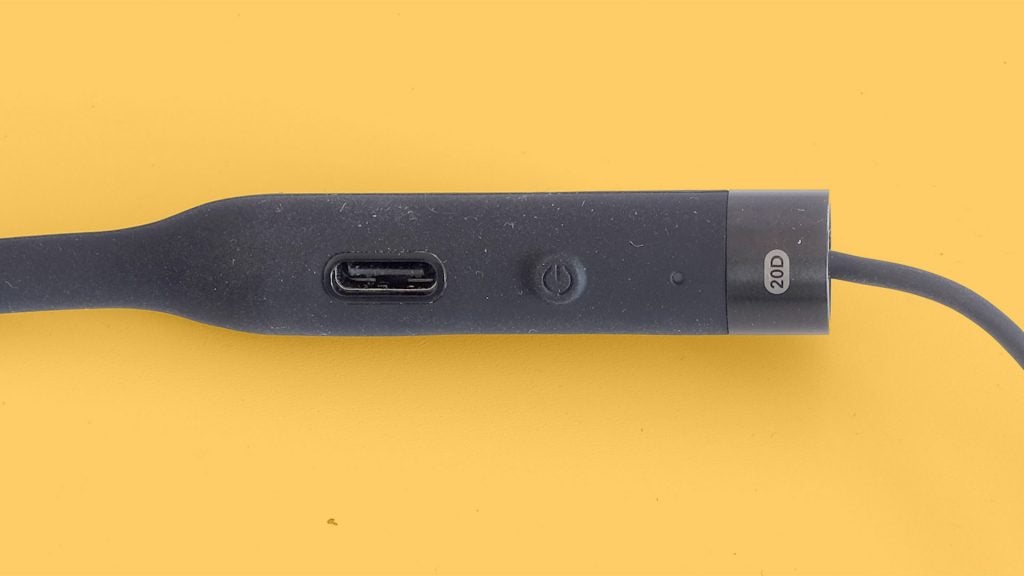 This is last-gen stamina, although still perfectly sound in a practical sense for most people. The RHA T20 Wireless do at least provide sufficient warning that battery life is about to run out – more so than just about any pair, ever.

You’ll hear the approximate battery level remaining on turning the earphones on, with voice prompts beginning when you hit (it seems) the 40% level, and each gradation below that. 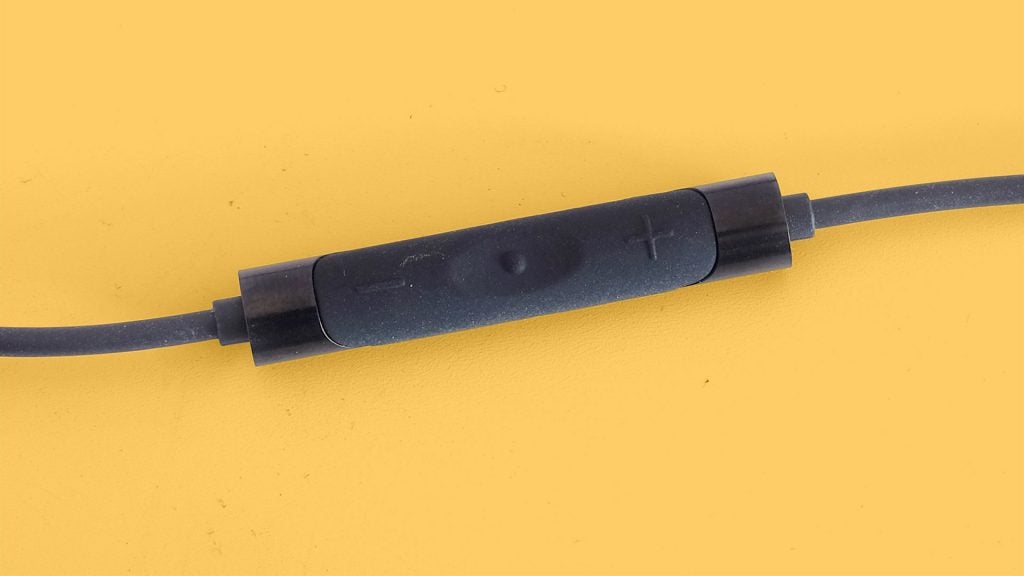 The real design extras are all about sound, not tacked-on features. These earphones have unusual “dual coil” dynamic drivers, which are a little like concentric speaker drivers, with two sets of magnets for better control over the voice coil.

The RHA T20 Wireless also have removable filters. These screw into the earpiece aperture and tweak the sound by altering the final “tunnel” through which the sound travels. It may sound odd, but the same technique has been used numerous times in high-end earphones, including those of the dearly departed Phonak Audéo range, and RHA’s own T10i and T20 models. 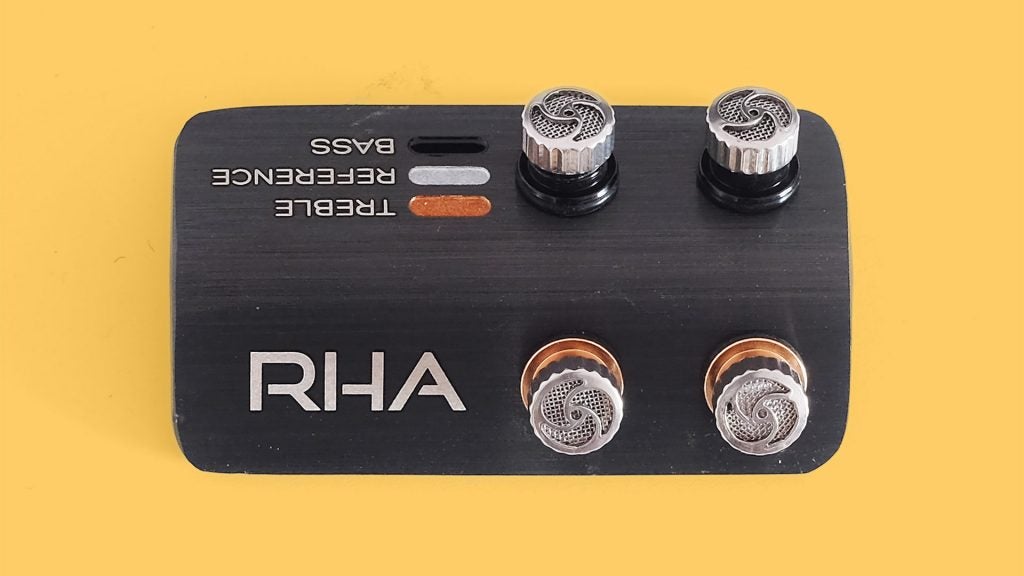 You choose between the standard “reference” tips, and ones that emphasise treble and bass a little more. RHA sells replacements online, in case you lose one.

RHA T20 Wireless sound quality – In general, these are an excellent sounding pair of in-ears, although there’s room for refinement in some areas

I’ve mostly listened to the RHA T20 Wireless using the reference tips. Each set makes a slight difference, but it’s important to understand it’s all about subtraction. These filters simply tweak the sound a little, just before it reaches your eardrum.

The bass filter has a layer of what looks like foam, the reference one a thinner layer, and the treble filter is an empty tunnel bar the grille at the end. RHA’s bass filter doesn’t boost the bass, it dampens the treble. 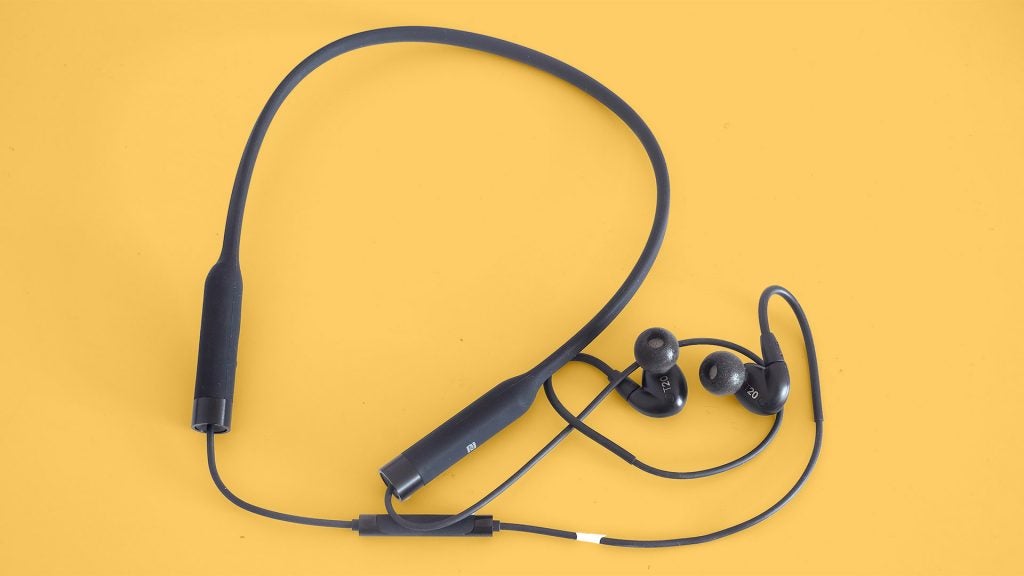 General sound quality is excellent. These are some of the most “hi-fi” wireless earphones you’ll find below £200.

I’ve been most impressed by the intricacy of their mid-range detail. They pull out more texture from vocals than the Sennheiser IE2 BT, and the RHA mids sound less compressed too.

The RHA T20 Wireless also display a deep, punchy and reasonably lithe bass. Their low-end does appear somewhat boosted, but that’s a sensible choice for a set of earphones made for general enjoyment, rather than to please the narrow audience of audio-quality extremists.

The best bits of the RHA T20 Wireless do demand close listening for a full appreciation, though. You don’t get a hugely wide sound here. Their canvas isn’t as large as that of the Sennheisers, but the spatial imaging is intricate and engaging, and there’s good depth to it. The picture is not a wall-filler, but it’s detailed. 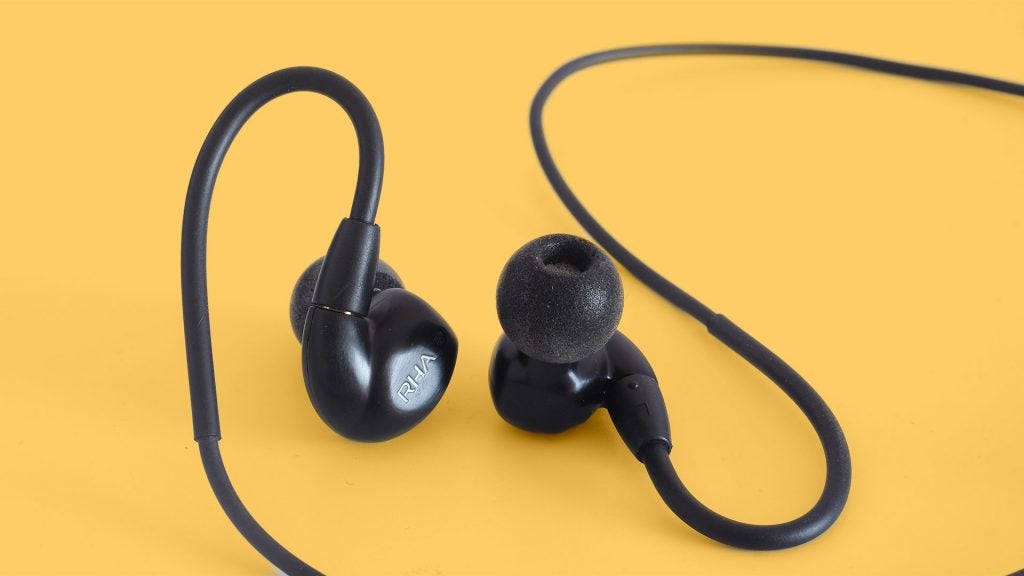 Separation is also better than the Final E4000s, a pair of earphones that might be considered a rival – if Final ends up making a wireless version.

Combine decent separation with the energetic bass and you have sound that works well for casual listening and the more thoughtful kind.

But I don’t believe the T20 Wireless will appeal to absolutely everyone. The upper-mids are slightly challenging, which is the case with most RHA earphones I’ve heard. This can give some higher-register vocals a hard edge.

It isn’t enough to make the earphones sound seriously sibilant or harsh; not ideal if you like your sound silky-smooth and refined. It also detracts from the otherwise natural-sounding vocal rendering.

This upper-mid effect can be tempered a little by using the bass filter, although it’s my least favourite of the three “profiles”. 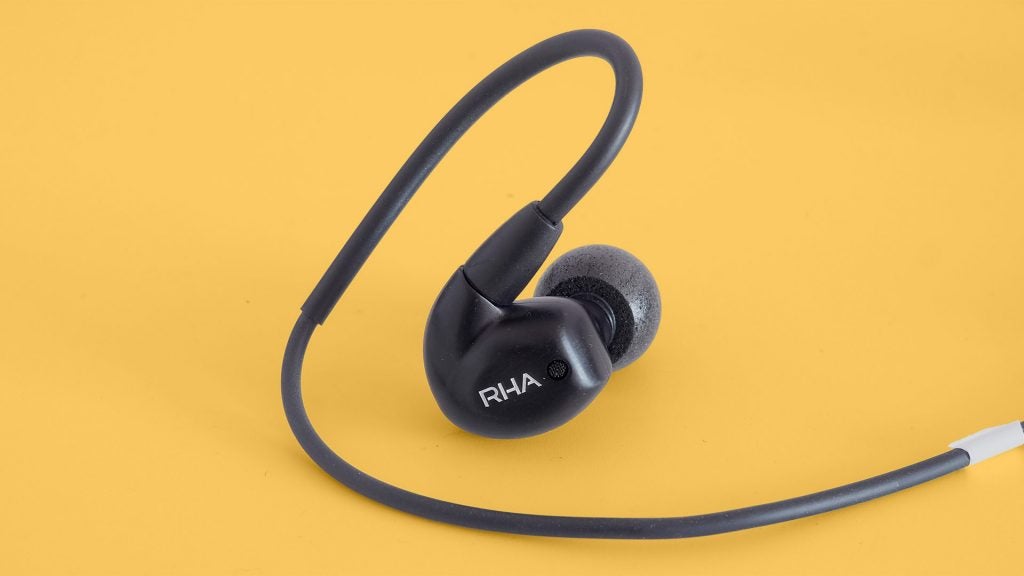 Should I buy the RHA T20 Wireless?

The RHA T20 Wireless are great wireless earphones, if you’re not bothered about true wireless tech.

Their sound could be more expansive, and slightly more smooth or refined in a couple of spots. Nevertheless, these are satisfying earphones if you’re after great sound. Having the choice to use them wired, or not, is welcome – and the decision to bundle the cable shows that, as ever, RHA is generous with its accessories.

I’d steer clear for sporty use, though; the neckband bounces around too much for comfort.

Overall, the RHA T20 Wireless earphones offer a pretty good package. At £200, they’re expensive, putting them within range of genuine true wireless offerings, such as Sony’s WF-1000XM3. They offer a good, if not quite up-to-date, feature set, but the real plus here is the audio quality.