The RHA MA-450i earphones are out to impress on first glance, or at least first touch. Their buds are made out of machined aluminium, they have a fabric-braided cable and – unlike the predecessor RHA MA-350 – they offer an inline iPhone remote control too.

Design
Last year, we were pretty impressed with the hardy metal bodies of the RHA MA-350. You don’t often see aluminium earphones for under £30, and while a big part of the appeal of metal is the look and feel, they’re more likely to survive being trodden on than plastic earphones like the rival Sennheiser CX 300. 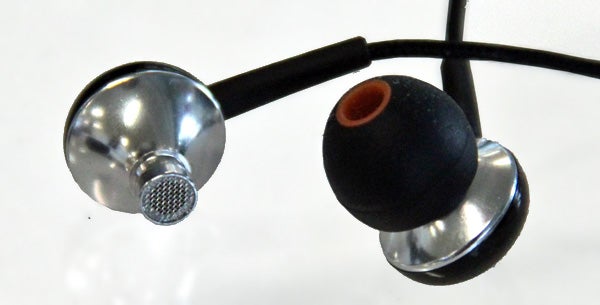 Not a great deal has changed design-wise in the MA-450i. The buds use the same bell shape and similar construction. This time, a frosted finish has been swapped for gloss, with shiny silver for the inner part of the earpieces, and black for the rear. Although a little more obviously eye-catching than the previous style, they hold onto a shred of class.

Also adding a little visual flair, the inner parts of the supplied eartips are orange rather than black. The shinier look and extra colour are nods to a youth audience, but RHA hasn’t gone too far here, like – for example – JVC’s slightly ridiculous-looking JVC HAFX1X. 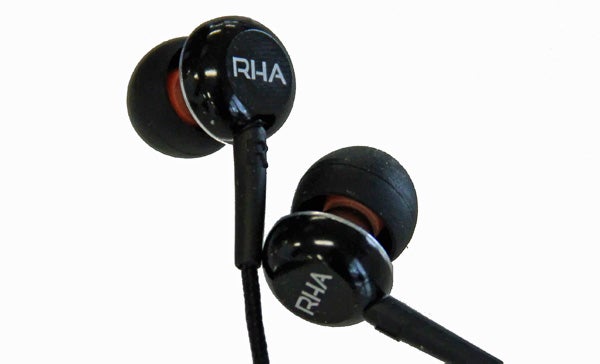 It’s not all good news on the design front, though. The braided cable makes a good first impression, seeming a little higher-end than standard plastic or rubber, but as is often the case with budget braid, it’s not of great quality. It had already started to unravel at the cable join by the end of our testing.

The cable itself is also immensely prone to kinks – possibly the most we’ve ever encountered – and this also seems to make it quite tangle-happy. After a day in a coat pocket, it is reduced to a tanglesome mess. When “fancy” elements like the cable braiding backfire, we’re left wishing simple rubberised plastic had been used.

Accessories and Fit
The rest of the accessories package is strong, though. With the RHA MA-450i you get a little felt carry case and an unusually expansive seven-set collection of rubber tips. All are single-flanged apart from one pair of dual-flanged jobbies, and all use the orange-centre design.

With so many tips to choose from, you’re almost guaranteed a perfect fit. And while the use of aluminium makes these earphones slightly heavier than some plastic models, it’s not something you notice in everyday use. They’re perfectly comfortable, and the sort of IEM earphones you can simply jam in a lughole to get a good fit – rather than having to fiddle around with ’em
. 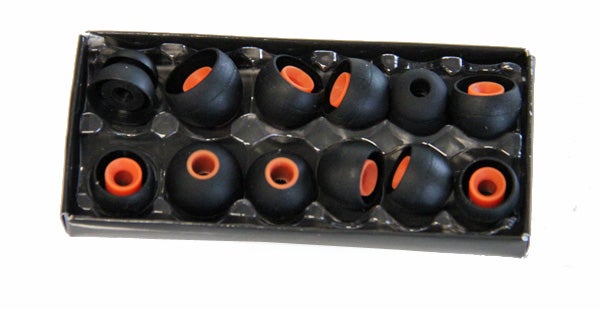 Thanks to the completely closed design, noise isolation is fairly good too. They can hack public transport with ease. 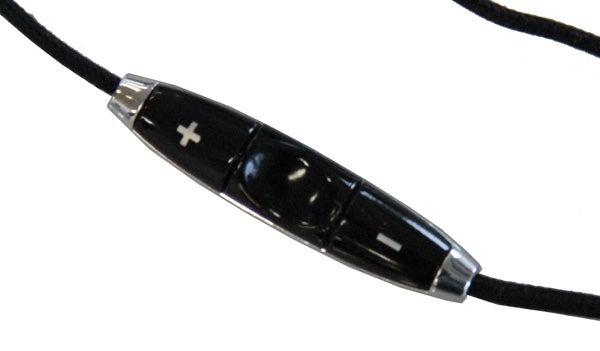 The most significant design “innovation” of the RHA-450i, though, is the new iOS device handsfree and remote housing. It sits just under 15cm down from the right earbud, uses the same glossy/black silver design as the earpieces and has three buttons.

These let you take calls, control music playback and volume with iPhones and iPodx. The middle button has a finger-hugging dip in the middle, making blind operation easy. And although it’s a little larger than some, its all-plastic construction means it adds no noticeable weight. Android phone users can use it as a handsfree call kit, but it won’t work as a controller for the music player. There are a few headphones for Androids out there, but we don’t blame RHA for prioritising the Apple crowd in its first in-ear remote controller pair.

The RHA MA-450i, like just about every sub-£50 set of earphones, use dynamic drivers, which at 10mm are slightly larger than the 8mm or so norm. Spec-wise these earphones appear to be identical to the slightly cheaper MA-350 model, with 16ohm impedance and claimed 16-20,000Hz frequency response, but there do appear to have been some minor tweaks made to the tuning of these IEMs.

Listening to the MA-350, we noted a slight bass bias that’s common with earphones at this level. And it’s here too. While not strictly 100 per cent accurate, it makes the MA-450 a fun listen. And while there’s a hint of bloating in tracks that have been mastered with a tad too much bass, the sound is no boomy mess. Presentation is forward, and matched with the keen low-end, it makes these earphones capable of delivering plenty of punchy thrills – more so than the rival Sennheiser CX 300. 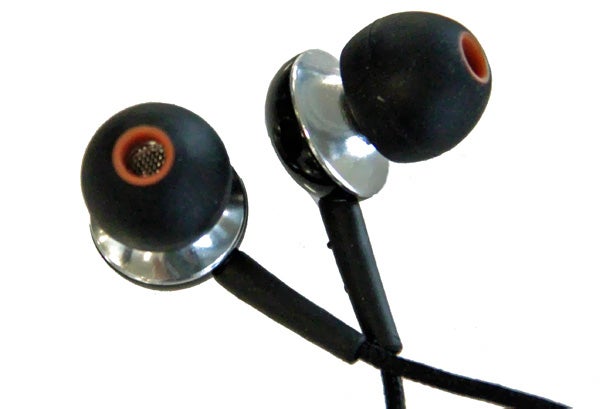 The sound is not perfect, though. Soundstage is a little narrower than the best at the price, and while RHA seems to have reined-in the treble since the MA-350 earphones hit the shelves last year, it still has a tendency to sound a little harsh and brittle. Hi-hats crash a little uncomfortably at times, and there’s a bit too much “ess” in “S” sounds during spoken recordings. There’s plenty of treble presence – which we can’t say about every set at the price, but the top-end control isn’t quite there, leading to a slightly fatiguing signature.

Value
At just £10 more than the RHA MA-350, it doesn’t seem as though we’re being asked to pay too much for the MA-450i’s remote control, and the extra rubber ear tips. However, we can’t ignore that there are better-sounding earphones at the same price. If you care about sound quality more than anything else, the SoundMagic E30 are a better buy. 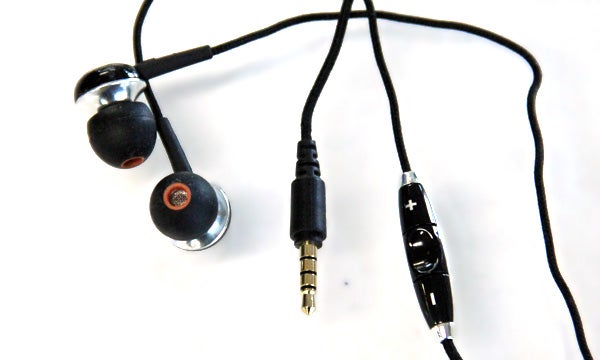 Yes, they look a bit worse and use plastic bodies rather than tasty machined aluminium, but treble offers much greater finesse and while there’s less bass volume, it’s more expertly handled. In similar fashion, while the Sennheiser CX 400 sound less dynamic, they’re a good deal smoother, with none of the harshness of the RHA pair. For short listening sessions, the RHA MA-450i are great fun, but for an everyday workhorse pair, there are better sets out there.

The RHA MA-450i offer snazzy aluminium bodies, a neat remote control for iPhones and iPods and the small thrill at having bought British. They offer exciting sound too, with punchy bass and exuberant treble supplying more dynamism than most. However, we have a few quality concerns about the braided cable and rivals offer more refined, less tiring treble.