This is why you bought a PlayStation VR. It isn’t about replacing traditional gaming, nor is it (yet) about coming up with brand-spanking-new ways to play your games. No, it’s about making the games you know and love significantly better in virtual reality, and that is exactly what is achieved in Rez Infinite. Remember all those expressions of, “Oh my god, my mind is blown!” from people in all those PSVR trailers? They were probably playing Rez Infinite. An incredible blend of sight and sound, it is simply a shining example of what the headset can do.

First off, a small word of warning: this game is an explosive assault on the senses. If Rez Infinite is your first experience in virtual reality, prepare to peak in every sense of the word. The game is a reimagining of the original game released 15 years ago on the PS2, granting players a full 360-degree view in VR. Gameplay couldn’t be simpler – simply look at up to eight targets while holding X, then release to shoot them. Along the way you’ll earn overdrive boosters (kill everything in sight) and evolution boosts to improve the defence of your avatar. That’s it. But the decoration around the gameplay can be mesmerising.

Infinite is probably one of the best-looking VR games available today. Not just on PS4, either; I mean on anything. Its beautiful stylistic visuals and vivid colours will make you feel like you’re inside a graphic equaliser while amazing songs play. 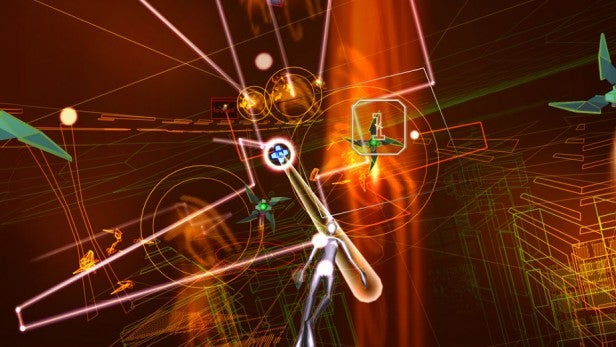 The game is on-rails, much like Until Dawn: Rush of Blood, only Rez moves at incredible speed. I couldn’t believe how, despite feeling like I was going 100mph and looking all around, I didn’t feel motion sick once. It’s a testament to the developers that the experience remained so comfortable even during vast panning shots of end-of-level bosses, or sharp whips in perspective as the camera showed enemies in front, to the side and behind me.

You can either look at targets to shoot them or aim with the left stick. I chose the former, and realised I was doing an amazing Stevie-Wonder-at-the-piano impression when there was a large number of enemies to kill. It never became too taxing on my neck, though.

There are several modes, but the first to jump into is the classic arcade mode. It’s very short – only five stages in total, each lasting around 10-15 minutes – but packs a stiff challenge. There are also bonus modes including Beyond – a series of conceptual levels for after the campaign is finished or you’ve played over five hours – and score attack, so for £24.99 there’s still a decent amount of content.

In arcade mode, each stage has you working through a series of ten levels, the tenth containing the boss. The idea of the ten levels is to build up your character through the evolution and overdrive points (both dropped by killing enemies) before stepping up to the big baddy. 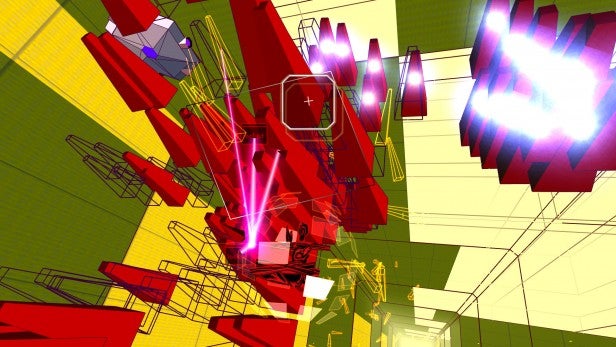 Trying to get through arcade mode in one sitting is tough, as you’ll likely take a few hits against each boss – after earning enough evolution points, your character will evolve into a new form, which basically grants you one extra hit, like Sonic with rings. If the challenge proves too overwhelming, there’s a mode that allows you to simply enjoy the experience without suffering game-overs.

And what an experience it is. It’s hard to describe how incredible being in one of Rez Infinite’s levels is. Watching one of these stages unfold on TV simply cannot compare to the sense of scale that virtual reality creates. Watching enemies fly in from behind, being able to spin around and catch those who try to flee my fire at the last second, and seeing a boss the size of a hangar being built right in front of me… It’s sensational.

The visual spectacle also wouldn’t be half as excellent if the soundtrack wasn’t so great. Thankfully, Rez Infinite’s is up there with the best of them. It blends so perfectly with the action that it’ll take a good while before you realise your shots have a direct impact on the sound. Each time the X button is pressed, it adds music, be it a strike of a snare or kick of the bass drum, and it builds upon Rez’s iconic synaesthetic immersion.

Also, stage one of each level features a very simple sound, and each progression adds new layers to the song, with stage ten culminating in a much more complex and brilliant score. You don’t have to be a top-grade musician to appreciate this, either – I found myself tapping my foot to the bass in every level. 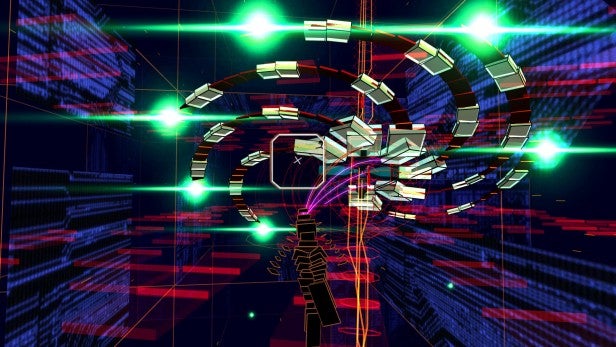 Again, there is a slight downside to this building in complexity as you progress through each level, and that is its potential to overwhelm. As much as I adored the look and sound of Rez Infinite, there were times during boss battles where it all became a bit too much to take in. I’m a migraine sufferer, and there were times when the action was so “in-your-face” with such an array of vivid colours that I wasn’t sure if I was in awe or having a seizure. Of course, this won’t affect everyone, but it’ll definitely be too much for some at times. To counter this, Rez does have a “TV mode” to help alleviate the intensity somewhat.

Rez Infinite is the best game on PlayStation VR right now. It is simply the perfect example of what virtual reality can bring to traditional games that you know and love. To the VR naysayers, hold this game into their face and tell them to shut it. It looks and sounds gorgeous, plays brilliantly and for just £24.99 is an absolute must-buy.