Return of the Obra Dinn is a bleak ditty but offers solid meat for puzzle fans to get their teeth into, with a similar love of paperwork and information cataloging that won fans for Pope's previous title, Papers Please.

Very few games actually succeed in the fantasy of letting you play a detective.

Some have come close, but I think Lucas Pope’s Return of the Obra Dinn has finally nailed it. The game, which sets you as an insurance inspector in 1807 trying to pick apart the fates of titular boat the Obra Dinn’s 60-strong crew, requires meticulous attention to detail, a keen investigative mind and the ability to take a few logical jumps to work everything out.

I played Obra Dinn with a real-life notebook, and if I hadn’t have been playing it while travelling on a laptop I’m sure I would have covered the walls around me with post it notes, string and all manner of other detective show paraphernalia. Obra Dinn hails back to the old adventure games where you play for a while and then stop, the game ticking away inside your head as you try to piece together the mysteries.

I spent a long time puzzling over the identity of one particular crew member, taking screenshots of him, sending annoyed ‘who even is this guy?’ WhatsApp messages to friends, and an hour of internet research to try and work out who would have tattoos in the early 1800’s. Upon uncovering his identity – sort of, as the game only tells you if you’ve made the right choice when you have three correct theories – I leapt to my feet with a cheer. 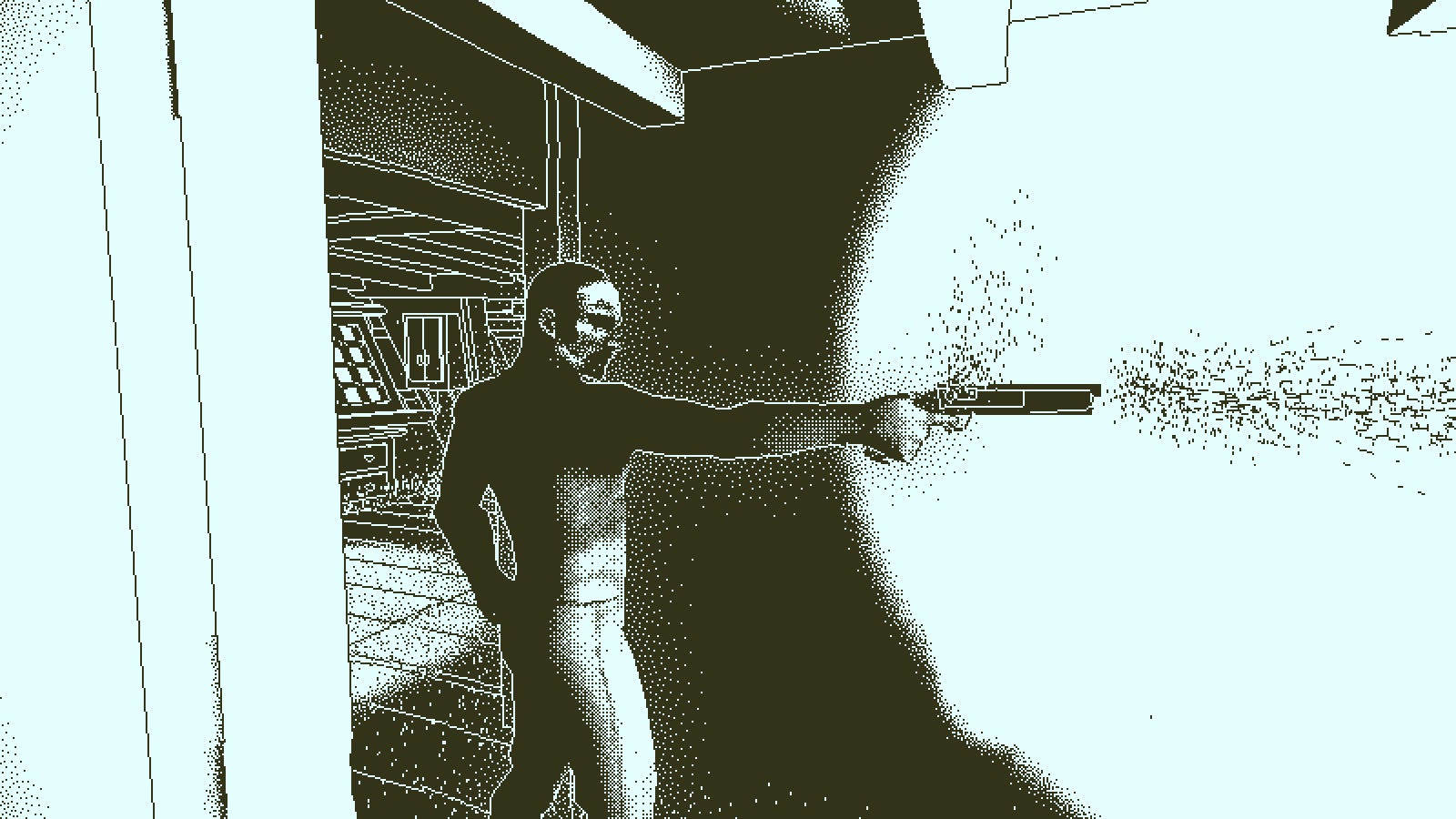 You have two main weapons, a stopwatch and a book. Your stopwatch can be used in conjunction with corpses to show you the exact moment of their death, providing you with a small audio log ahead of the grisly still-life. You’re free to wander through the scene of death, and indeed you’ll sometimes spot other corpses within these scenes which you then can trace back to their own murder scenes. Following the bloody breadcrumbs is the real meat of the game.

The book meanwhile, helps you keep everything in order. It has the crew manifest and a sketch containing the entire crew and automatically populates with information on each body as you find it, in addition to providing a handy list of everywhere a certain person has shown up, meaning you can flick through the different death visions to aid in the identification process. Your guesses on each crewman’s identity, their method of death and who did it to them can be filled in, and over time the book becomes a stitched together eulogy for the many many lives lost during the voyage, telling the boat’s twisted tale.

The game starts slow, starting with a vicious tableau that leaves you questioning exactly how bad things have gotten aboard the Obra Dinn. Over the course of the next several hours, you’ll encounter scores of bodies and grisly scenes that reveal to you quite how badly everything has gotten on board the Obra Dinn. You view this through a slightly abstract light: people are dying in scores here, killed in terrifying situations, dying tragically, whispering their lasts to a loved one before death’s embrace envelopes them. 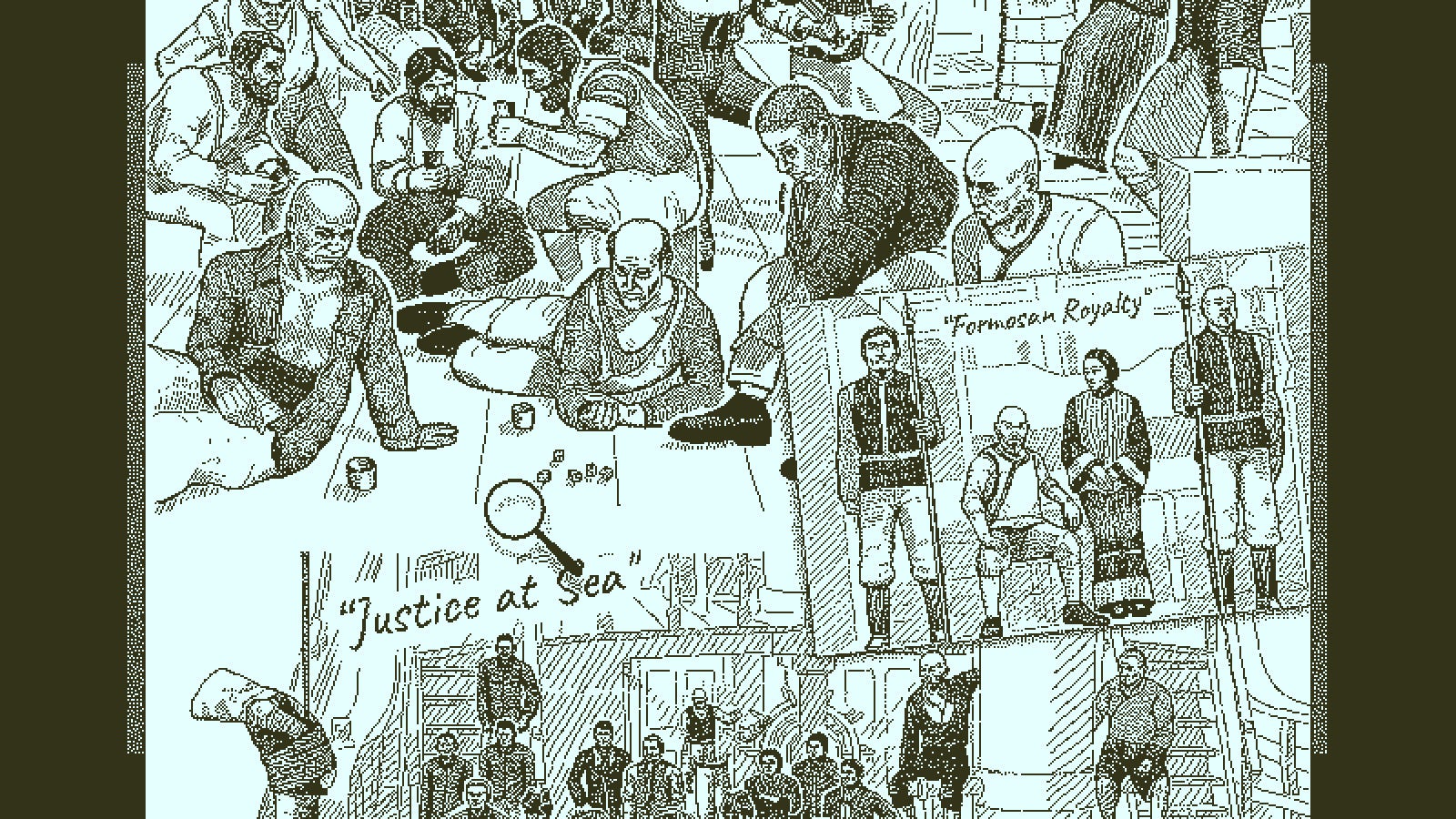 The art style to the game is interesting and unique

However, while it definitely has the capacity to be emotive, often you’re parsing information through the eyes of a bureaucrat, impassively marking down relevant information even as you watch humanity breaking down aboard the ship.

Visually, Obra Dinn has a distinctive look, picked out in monochromatic lines, that’s quite unlike anything I’ve seen before in recent memory. The default colour palette is drawn from the Macintosh and bathes things in sickly greens. However, you can use several other rendering styles, references to old IBM or Commodore models that wash the screen out in different hues.

The images, which I could best describe as a sort of digital pointillism, help you detach from the gory moments you’re often transported to: when someone is shot at close range, you’re often treated to a pixel rendition of gritty gunk coming out of the exit hole, which somehow can make it feel worse as soon as you’ve stopped pacing around the scene looking for clues.

Return of the Obra Dinn is the sort of game that shouldn’t exist: it’s bold, it takes risks and the game is so far from holding your hand it’s standing in a different room in case it gives anything about what you’re supposed to do away with its body language. 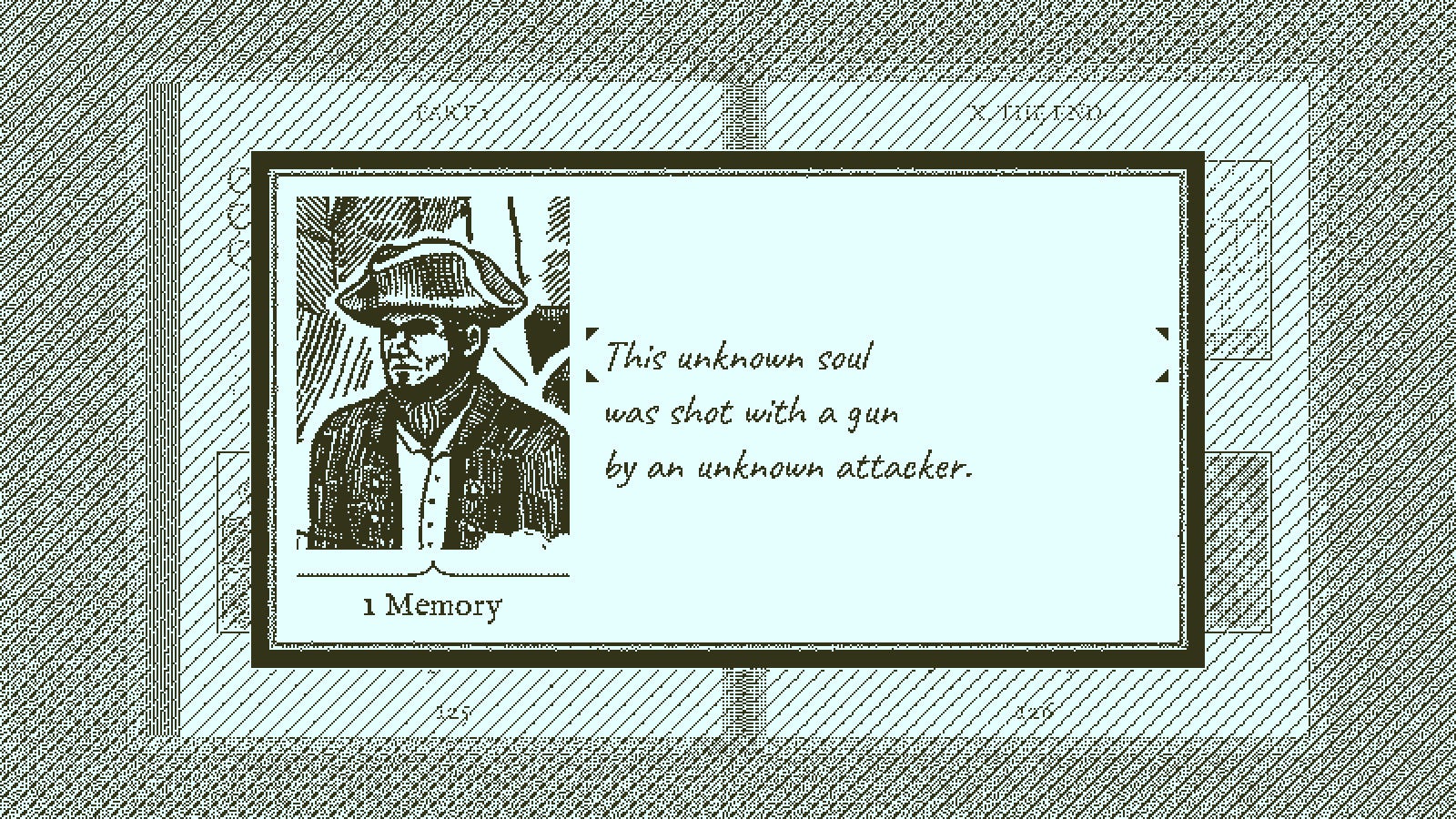 Pour one out for This Unknown Soul

Still, it’s masterful work, and while the slightly wobbly pace can cause frustration, the meat of the game is a slow-burn delight that can let you feel like a genius when you get it right, whether that’s immediately or after a sleepless night trying to work out who someone is by the shape of their shoes.

Return of the Obra Dinn is one of the most interesting games I’ve played this year, and it has a lot to offer inquisitive souls. The game has a few flaws, but it doesn’t shy away from them, and when you get used to the treacly pace and the games unusual logic, it’s excellent.

If someone had told me that a career in insurance involves exploring intricately detailed worlds with a magic watch, I would probably be working in insurance right now.

Return of the Obra Dinn is a bleak ditty but offers solid meat for puzzle fans to get their teeth into, with a similar love of paperwork and information cataloging that won fans for Pope’s previous title,  Papers Please.