PS3 only – available to download on PSN
Guitar Hero may be retired and Rock Band, as we think of it, on hiatus, but it looks like the music action game isn’t dead quite yet. Next week brings us the release of Rock Band: Blitz, Harmonix’s arcade spin on the genre, and as an appetiser the PS3 gets Retro/Grade, one of the best new games to hit PSN in some time. Dig out your wallet and dust down that plastic guitar – this one will make it worth your while. 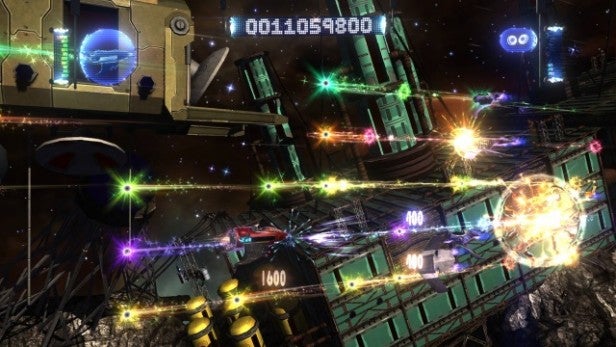 Admittedly, Retro/Grade doesn’t look like a guitar game, and it’s perfectly playable – and in some ways more so – with an ordinary Dual Shock 3 controller. Retro/Grade’s conceit is that it’s actually a retro arcade shoot-em-up in the vein of Gradius and R-Type, with the action scrolling left to right, enemies to blast and waves of incoming fire to dodge. Only in Retro/Grade, something has gone wrong. At the end of the game our hero, Rick Rocket, discovers that his warfaring ways have created a rupture in the space/time continuum, and only by travelling backwards in time, erasing his every move, can he put things right and start again.

Rhythm Action meets Bullet Hell
How this works is quite ingenious. The action now scrolls from right to left, and it’s your job to ‘unfire’ the weapons you fired by switching between different coloured lines on the screen and activating your cannons at exactly the right time. At the same time, enemy bullets drift in from the left and need to be dodged, while robot arms or energy beams may attack one or more lines, forcing you to evacuate.

The trick is that there’s a rhythm to it, and that everything needs to happen in time with the pumping electronic soundtrack. In a way, playing Retro/Grade is a bit like playing Guitar Hero and R-Type – or maybe one of the more escoteric Japanese ‘bullet hell’ shoot-em-ups – at the same time. It’s no good grabbing all the notes if you can’t dodge the enemy fire. 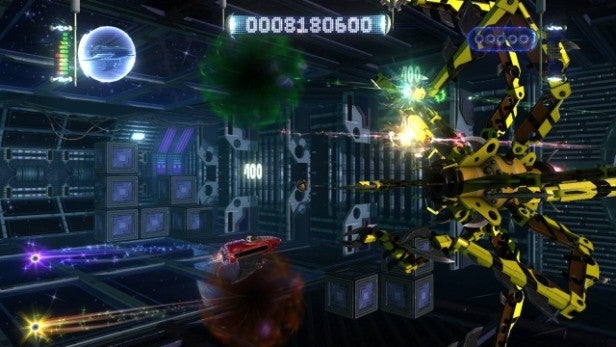 There are some other variations. Sometimes you have fired longer energy beams, where you’ll need to press and hold the button, while at other times you have spat out a cluster of missiles, which need to be hoovered up with a spot of mashing. Some enemies release black hole bombs which drag you off in one direction, and you’ll find yourself met with walls of bullets, handily colour coded to show you which line to get into, coming in to get you from the left.

On higher difficulty levels it’s genuinely frantic stuff, and while it seems that there’s actually little to it beyond getting in the right line at the right time, the timing of when turns out to be more crucial than you might think. Get in too early and you may hit enemy fire. Get in too late and that’s another bullet missed.

You will fail, but here Retro/Grade has been generous. Not only can you engage a score boost with a Rock Star Overdrive/Guitar Hero Star Power move, but there’s a handy fuel gauge that allows you to rewind the last few seconds (and more) at the touch of a button (or wiggle of the whammy bar). You can redo the chunk that cost you your life, or simply make sure you hit the bonus notes you needed. There’s a bit of balancing to be done, though, in that fuel spent costs you points at the level’s end. 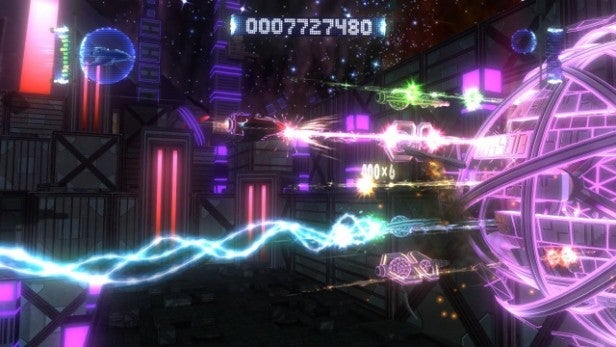 Surprisingly, there turn out to be advantages to playing with either a guitar controller or the conventional pad. The first is definitely quicker, and you’ll need that speed to survive on higher difficulty levels. However, while using the Dual Shock 3 involves switching lines with the analogue pad or D-Pad, which feels slower, it also feels more natural when you’re ducking enemy attacks.

Sound and Vision
It’s hard to say that Retro/Grade has any faults as such. There are only ten tracks and levels, but there are several difficulty levels – not to mention a challenge mode where you cross the galaxy, repeating missions with different waves or different success and failure conditions.

The graphics are a perfect mix of old-school arcade and Geometry Wars neon retro, and it all looks and sounds spectacular. The level names and short narrative explanations show a knowing wit and love of gaming culture. In fact, the biggest issue is probably the use of original music instead of licensed tracks you know and love. 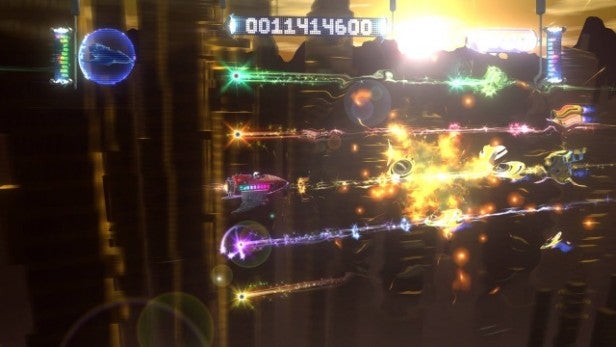 Meanwhile, licensing known acts and songs would have been an expensive burden on a small indie development team. All the same, part of the appeal of a rhythm action game is in interacting with familiar tracks, even if they’re tracks you don’t think you even like. Retro/Grade is brilliant, but wouldn’t it be even more brilliant with a soundtrack of eighties pop and metal, or even bombastic AOR? Maybe, maybe not.

Verdict
The most exciting original game to grace PSN in ages, and a must-buy for fans of old-school shoot-em-ups or music games. It’s not the biggest of deepest action games out there, but it’s full of smart ideas and ingeniously put together, while it looks and sounds spectacular. There couldn’t be a better reason to break out that dusty plastic guitar and start shredding.