What is the Retro-Bit Super Retro Trio Plus?

Retro systems such as the NES and SNES Classic Edition are all the rage these days, but the Super Retro Trio Plus – an updated version of Retro-Bit’s 2014 console – goes one better by offering support for original NES, SNES and Mega Drive cartridges.

It also comes with two controller ports for each system and is bundled with two good-quality SNES-style pads. The big news with this revised edition is the fact that it now supports 720p output via HDMI. All of this will set you back around £120.

Related: What is Nintendo Labo? 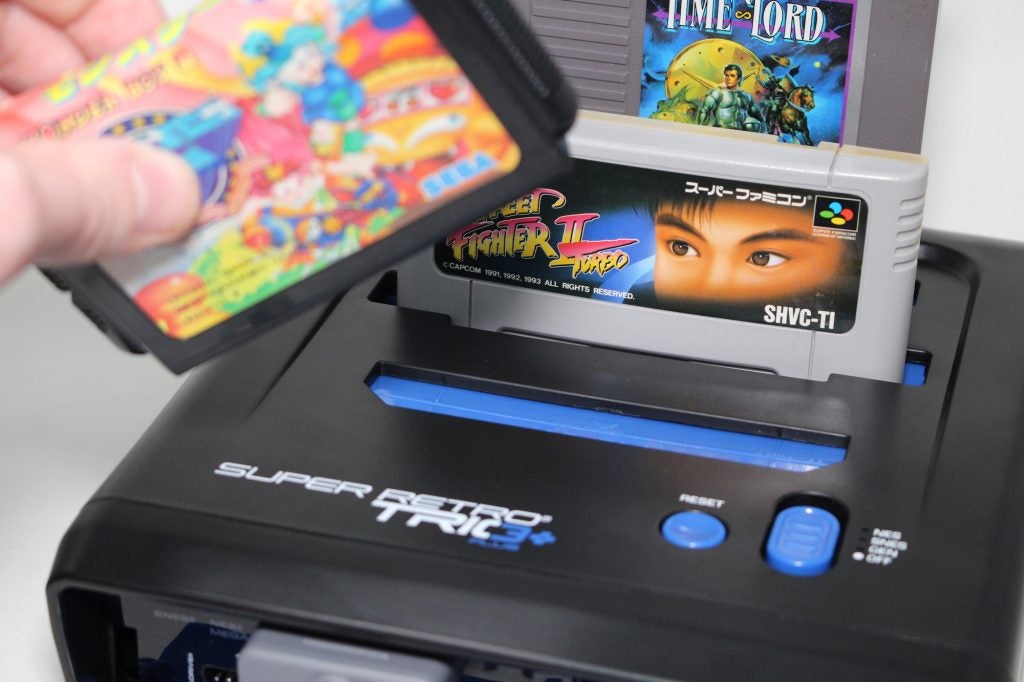 Retro-Bit has retained the basic case design of the 2014 version, which is no bad thing since it’s quite an appealing look. Build quality isn’t the best – there’s plenty of “flex” when you push on parts of the case – but we’ve certainly seen worse.

Three cartridge slots are found on the top for NES, SNES and Mega Drive (sadly, Famicom carts aren’t supported), while on the front there’s a pop-out flap that hides a dazzling bank of controller ports and switches. The switches allow you to toggle between active controllers and change the region settings for SNES and Mega Drive software, offering access to games from all over the world.

The back is where the HDMI out, AV out and power sockets reside. The system runs off a micro-USB connection, which means you can use a standard Android phone charger to power it. And it’s a good job, too, because the European model of the Super Retro Trio Plus comes with a two-pin EU plug; not a three-pin UK one.

The controllers bundled with the console are bespoke units created by Retro-Bit, but they do a decent enough job, despite looking a little cheap. They feel like slightly more ergonomic versions of the legendary SNES pad, with the same button layout and a similar cross-style D-pad. They’re also lightweight and come with an impressive 1.8-metre cable, so you shouldn’t have any issues if your sofa happens to be quite far away from the TV.

If you can’t get along with the included controllers then you can always use your own SNES, NES or Mega Drive pads. In the case of the latter, you’ll need to since the button mapping is hopeless – the C button is mapped to the L shoulder trigger. 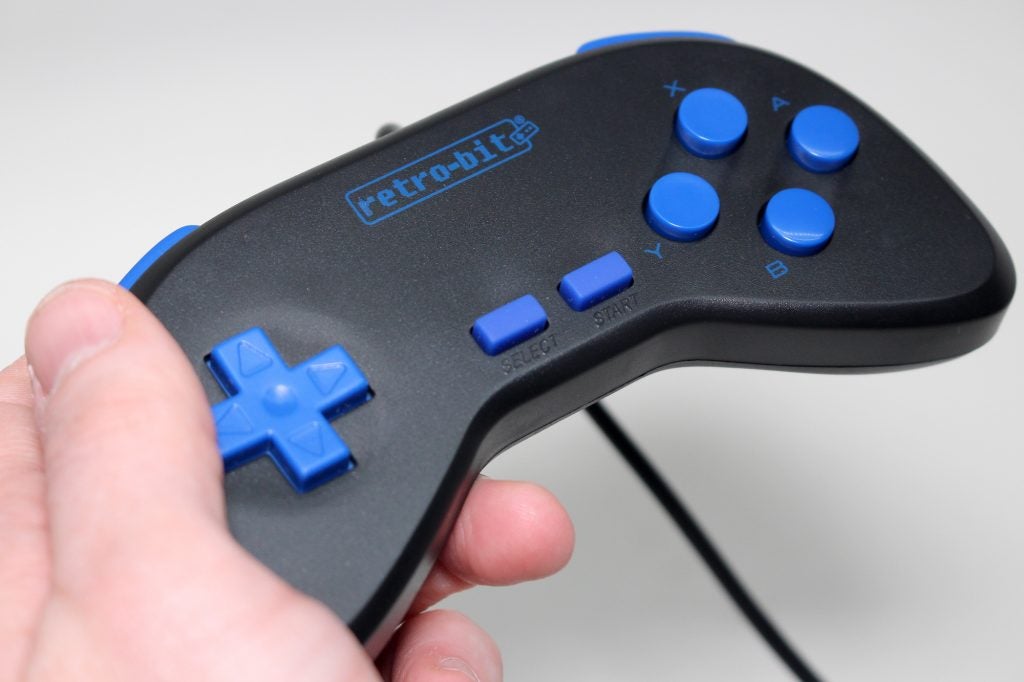 The NES, SNES and Mega Drive are arguably three of the most influential gaming systems ever. Between them they witnessed the birth of franchises such as Super Mario, Zelda, Sonic, Streets of Rage, Final Fantasy and many other classics.

The Super Retro Trio Plus provides the opportunity to sample the catalogues of all three systems, granting access to one of the most exciting periods in gaming history. As a result of the region switch options, you can also play titles from other parts of the world, which is something that wasn’t possible on the original machines – at least not without modification.

HDMI support is long overdue on Retro-Bit’s line of clone consoles, but the quality of the output here isn’t as good as it is on the NES or SNES Classic Editions; it also falls short of the Hyperkin Retron 5. It isn’t terrible by any means, and is certainly a huge step up from the composite AV connection of the 2014 Super Retro Trio. However, it’s a shame that for over £100 Retro-Bit couldn’t at least match what was already on the market.

Another issue is that Mega Drive games run at PAL speed rather than NTSC, at least on this European model. The PAL standard is around 15 to 20% slower than NTSC – and if you’re used to playing games at full speed, you’ll notice how sluggish the gameplay feels and how slow the music is. It would seem that the region switch on the front of the console is only there to overcome problems with region-locked games, and has no impact on speed – even Japanese Mega Drive carts run slower. Note that this issue doesn’t seem to impact NES and SNES games.

Unlike the SNES Classic Edition, the RetroN 5 and the Cyber Gadget Retro Freak, the Super Retro Trio Plus doesn’t allow you to add filters to the image or create save states so you can pick up where you left off later on. However, because it’s going for a ‘pure’ plug-and-play console experience, it supports flash cartridges such as the Mega and Super Everdrive; systems such as the RetroN 5 and Retro Freak aren’t compatible with these devices. Using the Mega Drive flash cart, you get an added bonus: the ability to play Master System games on the console. 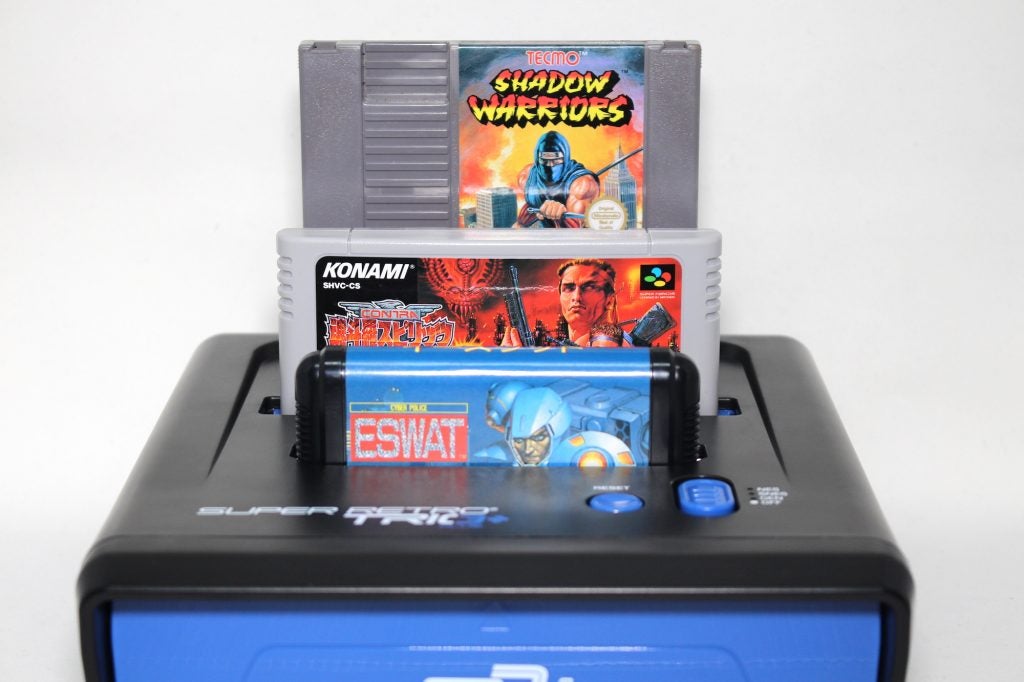 PAL speed issues with Mega Drive games aside, the overall performance is very faithful indeed. You’d be hard-pressed to spot any differences between this and a game running on authentic hardware. The visuals look spot-on, it works fine with games such as Star Fox and Stunt Race FX – which feature special chips inside the carts – and audio is great, too.

A slightly muddy HDMI image and Mega Drive games running at slower speeds aside, the Super Retro Trio Plus remains a likeable system – especially if you’re keen to save space below your TV and don’t want three retro machines connected all the time.

Support for original pads is also a bit of a boon, and if you have a large selection of original carts for all three supported formats, then this will be a decent investment. It’s just a shame that there are a few niggles holding it back from true greatness – and that the price is over £100. If this were in the same bracket as the NES and SNES Classics, it would be easier to recommended.