First, let’s go with the good news – Resistance: Burning Skies is the best FPS we’ve ever played on a handheld device. It can’t come close to Resistance 3 in the looks department, but it’s fairly close to the original Resistance, and with dual analogue controllers to work with it just feels right. There’s no messing around with touchscreen aiming or trying to steer a reticule with a digital pad, you can just take all the skills you’ve learnt over years of playing console shooters and apply them straight away. Admittedly, accuracy on such small sticks isn’t quite up there with the Dual Shock 3 controller – let alone the mighty Xbox 360 pad – but it’s really very good. 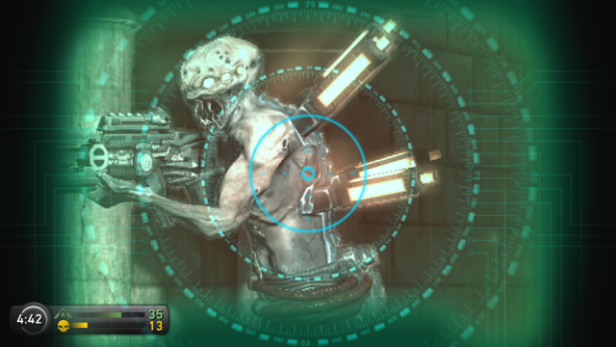 The result is that Burning Skies is the first console FPS where we haven’t spent the first few hours fighting the controls or adjusting to the blocky graphics or clumsy movement. You start playing and you’re sucked right into the game.

Arming the Resistance
What’s more, while this isn’t an Insomniac project – development was undertaken by Nihilistic Software – Burning Skies still understands what makes Resistance special: the weapons. Guns in Resistance should never just go bang, and Burning Skies brings all the quirks and secondary fire modes we know and love, plus a few we don’t. That means we still get the Auger, with its X-ray targeting and burrowing rounds, the Bullseye, with its auto-targeting market shots, and the Folsom Carbine, with its under-slung grenade launcher, and but also new variations on the Marksman rifle and the Fareye sniper rifle, all with entertaining secondary fire modes, and a shotgun that doubles as a crossbow, complete with exploding bolts. 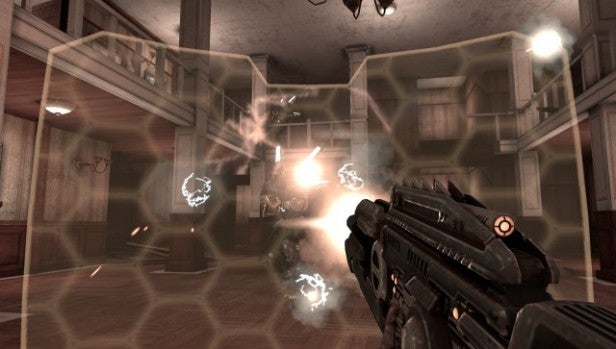 This means that in Burning Skies, as in any other Resistance game, you’re never short of entertaining ways In which to slaughter those nasty alien Chimera, but this time there are different ways of doing so. Burning Skies goes big on touch controls, from a little prod to swing a trusty fire-axe, to a neat drag-to-toss action for throwing grenades.

You tap the screen to tag an enemy for your Bullseye, swipe it diagonally to load a crossbow bolt, or drag across enemies to target them with a rocket launcher. This causes some issues in that it’s a challenge to do these things and keep your thumbs on the regular controls (unless you’re a contortionist or in possession of massive hands), but it gives the weapons some added flexibility and helps make up for Vita’s loss of two of the Dual Shock’s four shoulder buttons.

Defending New York
As with Resistance: Retribution on PSP, Burning Skies is a bit of side story, but at least this one factors better into the overall Resistance arc. This time you’re a simple New York fireman, caught up in the Chimeran invasion of the Big Apple between the events of Resistance: Fall of Man and Resistance 2. Not only do you have to contend with the Chimera, including one new type of alien scum, but dark forces from within more earthly authorities. 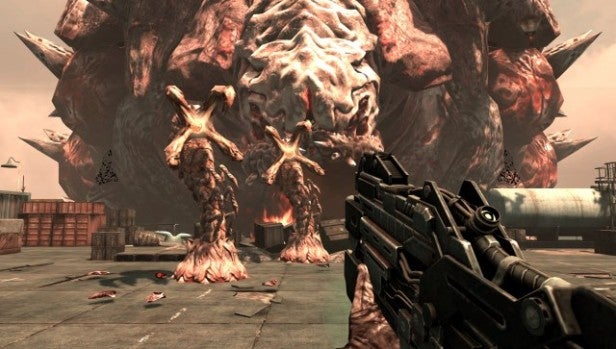 After Resistance 3’s gripping tale, this one feels underdeveloped. The fact that you’re a fireman doesn’t have a huge amount of bearing on the story, bar the fact that you’ve got a fire-axe and the odd bit early on when you get to rescue someone. The hook is supposed to be that you’re searching for your family, but you don’t really feel any sense of urgency about this, and the game functions more like a tour of battlegrounds, taking in the odd historic New York landmark – Ellis Island, the George Washington bridge – but mostly settling down into quite generic buildings, labs and rooftops.

And this is where we come to the central problem with Resistance: Burning Skies. While it’s great to see a shooter handled so competently by Vita, solid and competent is all it is. Enemy AI is sometimes patchy, mostly passable, but never all that challenging. The level design is uninspired. The encounters with the Chimera aren’t badly staged, but there’s no sense of tension and release, or of things building to any kind of crescendo. The boss battles, when they arrive, are dull, blast ‘em ‘til they fall affairs. There are great sections, but they appear sporadically. It’s not the kind of game that gets better as it goes on, more one with a handful of highlights sprinkled through. 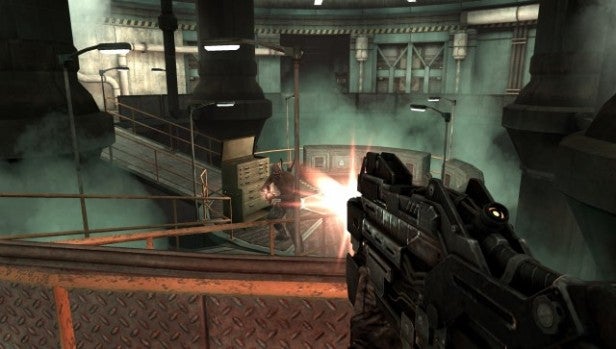 Unwelcome Parallels
It’s an entertaining game, and certainly not as dull and insipid as some of the more angry reviews out there might make out, but just not always that enthralling. In fact, it suffers from exactly the same criticisms as the original Resistance: Fall of Man when it appeared at the PS3’s launch. It’s a reasonable shooter that even a great weapon set can’t make that exciting, and that’s not really what we want on a brand new, powerhouse games machine.

Indeed, the parallels extend to the graphics.For the majority of the time, Resistance: Burning Skies looks like what you’d expect from a Vita game; a slightly less glossy version of a PS3 great. However, there are also times where shabby textures, glitches and boring architecture crash through the door and spoil the party. Where Uncharted: Golden Abyss came miraculously close to the visual quality of Uncharted: Drake’s Fortune, this one doesn’t quite hit the mark. 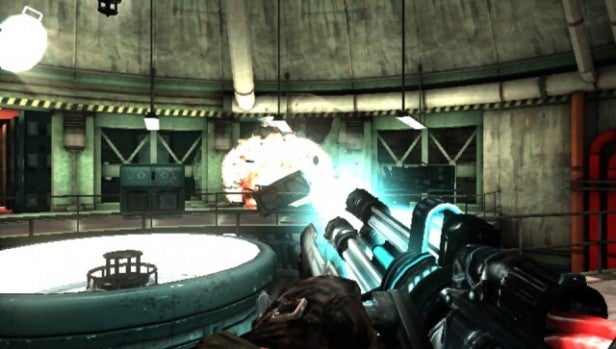 Online Action
All this makes Resistance: Burning Skies difficult to fully recommend, but there is one more point in its favour: multiplayer. Again, the options are solid rather than spectacular, but eight-player deathmatch and team deathmatch are reasonably gripping, and there’s a nice twist on the formula – survivor mode – which pits a large team of humans against a smaller group of chimera, but each time a human is killed they join the chimera side.

There’s a levelling system and a selection of achievements, and you can pick and customise your loadouts just as you might in a console FPS. Our biggest complaint is that the increased pace of multiplayer makes any touchscreen-operated weapons virtually useless. Pause to tap the screen and you’ll be dead before you know it.

A little disappointing, then? Well, yes, but worth a look if you need proof that handheld FPS games can work. It’s just a shame that Resistance: Burning Skies leaves us wanting and waiting for something with a little more vigour and imagination, because it makes it clear that Vita would be an excellent platform for a Killzone, a Call of Duty or, indeed, a great Resistance. It’s just that this one isn’t it.

Verdict
Resistance: Burning Skies is the first handheld FPS to get all the basics right, with tight, intuitive analogue controls, mostly decent graphics and good multiplayer options. Sadly, then it struggles with the other elements, with patchy AI, level design and pacing. In many ways it’s still the best handheld FPS out there, but it wouldn’t take an awful lot to take the title.