Ever since it unveiled a version of Resident Evil Zero running on the N64, Capcom has played a vital – if largely unsuccessful – role in convincing the more hardcore gamer that Nintendo’s latest chunk of hardware isn’t just one for the kids. Maybe Resident Evil 4 didn’t drag them over in their millions to the Gamecube from the PS2, but it proved that that cute little box could handle cutting-edge graphics and next-generation gameplay just as well as Sony and Microsofts’ hardware of the same period. Unsurprisingly, then, there was a frisson of excitement when Capcom announced a brand new Resident Evil, Umbrella Chronicles, for the Wii. Given the astonishing success of the system and the power of the brand post-RE4, it seemed like the stars might finally be aligning for the Nintendo/Capcom alliance. 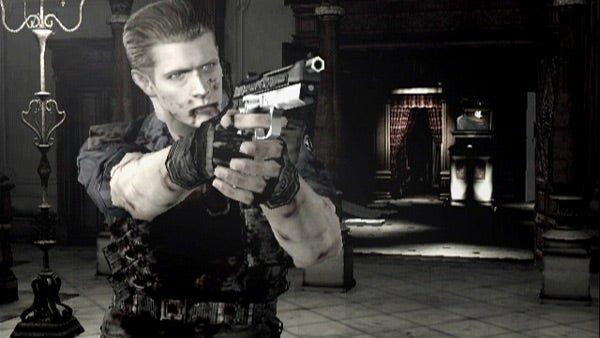 Equally unsurprisingly, disappointment followed the news that Umbrella Chronicles is not a traditional Resident Evil game – nor as some hoped a Metroid-style Wii FPS. Instead, it’s a straight-up, ride the rails lightgun shooter, using the Wii remote instead of a plastic pistol. We’ve seen this approach before in the Dead Aim/Gun Survivor RE offshoots, but it’s still hard not to feel a little sad that what we’re left with is just a glorified light gun game. On the plus side, it is one that offers a whistle stop tour through and behind the scenes of Resident Evil Zero, 1 and 3, with nods to 2, 4 and Code Veronica. The question is, once you get past the fact that it’s not quite what you hoped for, is Umbrella Chronicles good for what it is? 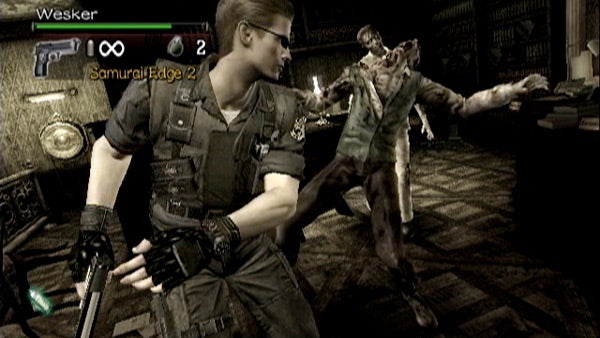 Well, it’s certainly good looking. Resident Evil 4 was probably the visual highlight of the Gamecube’s short existence, and still puts most of the Wii’s line-up to shame today. Umbrella Chronicles is basically the same. Perhaps there’s not the quality of lighting and texture that we expect from today’s PS3 and 360 big-hitters, but the characters and backgrounds seem to have more detail and surface grit than we see in other Wii games, and some of the wet surface effects and melodramatic lighting schemes still hold up in an age when Crysis, Bioshock and Uncharted rule the graphics roost. If anything, you’re left wondering why nobody seems able to make a Wii FPS that looks this good – with the possible exception of Metroid Prime: Corruption. 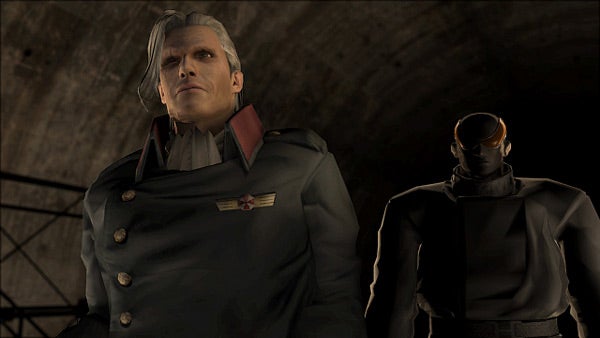 The Wii remote actually works fairly well as a lightgun. Pointing it controls the onscreen sight as your character trundles along his preset path through the level, and you fire with the B trigger while using the A button to pick up power-ups. Press A and swipe the remote and you slash with your knife at close quarters. Press A and then B and you can throw grenades. You can cycle between your main pistol (hurrah for unlimited ammo) and other weapons using the D-pad, and also use the nunchuk analogue stick to shift your view slightly (though it’s not usually worth bothering with). The almost constant pumping of the B trigger does result in an attack of the stiff and painful crab-hands after an hour or two of play, but arguably Umbrella Chronicles is a game to dip in and out of rather than dedicate whole days to in any case.

It’s not that it’s the most basic gun game around. There are bonus collectibles and power-ups a plenty to collect, and even alternative routes if you highlight the right opening and press A when directed. You can even customise your weapons between levels, though we’re hardly talking RE4 levels of tinkering here. However, at its heart this is simple and fairly repetitive fare. Keep shooting the zombies, and try for those fatal head shots when you can. Sometimes they come alone, sometimes they come in packs, and sometimes they come racing at you like something out of 28 Days Later. All you need to worry about is blasting them as rapidly and efficiently as possible. 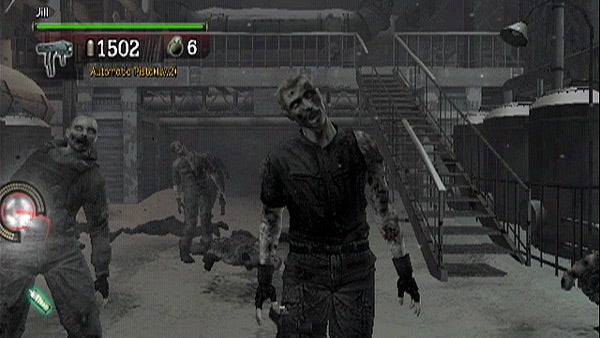 When it comes to the other creatures, just learn their attack patterns and watch for their weak spots. Umbrella Chronicles has done an excellent job of raiding the extensive RE bestiary, and packs in all the spiders, snakes, leeches, mutants, frog-like hunters, crows, dogs, and sharks (!) fans could wish for. In terms of pacing and shock value it’s no House of the Dead 2 or III, and it relies on sheer numbers or tough enemies for much of its challenge, but it’s nonetheless enjoyable for that. 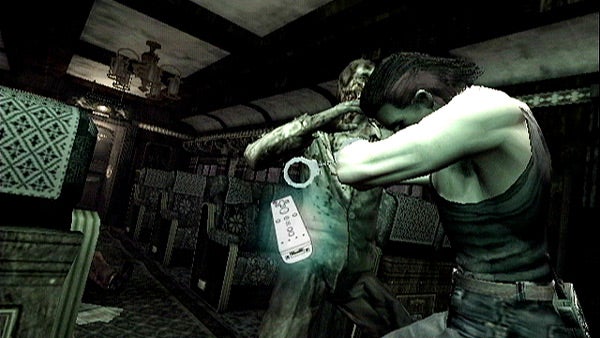 Enjoyable, that is, until we come to the dreaded Boss battles. I’ll never understand why Capcom gets this so right in some games and so horribly wrong in others, but the bosses in Umbrella Chronicles are either pitifully easy or painfully difficult, with only a tiny few that hit the right balance in between. I don’t mind the easy ones so much; they’re not forcing you to waste an hour going through an overly intricate and excessively long-winded procedure just to gun them down and get on with the next chunk of the game. Hard to see, impossibly to hit, constantly moving weak spots are a recurrent theme, and not one that I’ve grown any more fond of as Umbrella Chronicles has followed its course. One boss, only a little way in, was so annoying that – but for professional pride – I would have ditched the bloody game right there and then. “Shoot the mouth? I can’t even see the %@#%* mouth from over here!” 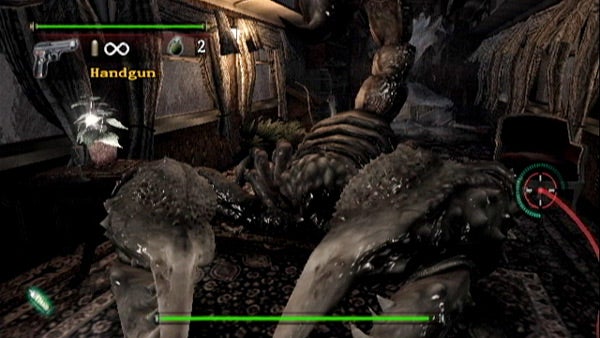 To make things worse, a number of boss battles incorporate quick-time event style button presses to dodge particular attacks. Pressing A and B when prompted is a no-brainer, but the game also insists on a waggle-the-remote manoeuvre that can be tricky to pull off in the heat of battle, while also ensuring that you need to spend a second or so lining up your sights again when it’s over. Wouldn’t using the Nunchuk to duck, dodge and dive have been so much better and more satisfying? Put all this together, and you have a game where you push your way through the main sections with ease only to get ground down time and time again by a boss.

Luckily, four things redeem Umbrella Chronicles and help save it from my own gaming Room 101. First, it’s a lot of fun with two players, partly because having two guns on screen relieves some of the pressure during the aforementioned irritating boss battles, and partly because the air of competition added makes the whole experience more exciting. Secondly, it’s pretty sensible about checkpoints, throwing in a save point halfway through each level plus restart points before or after major encounters. Thirdly, it’s actually a fairly decent length, with three main ‘acts’ divided into multiple chapters and based on RE Zero, RE1 and RE3, plus a fourth new act that takes the story on to the period between RE3 and RE4, and several extra chapters that flesh out the whole RE chronology from the Umbrella point of view. There’s even plenty of replay value for any sharpshooters who can dedicate themselves to achieving the top S ranking in every single chapter. 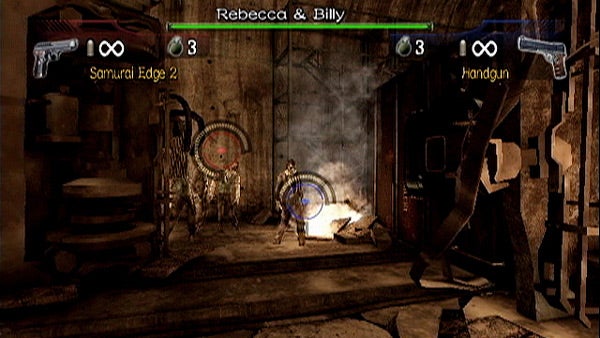 But it’s my fourth factor that will make Umbrella Chronicles an essential purchase for any long-time RE fanatic. What could have been a throwaway shooter with only a tangential relationship to the series is actually brilliantly integrated with the whole RE narrative. It’s fun to re-explore the old games from a new perspective (even if it’s all a bit puzzle-free and rushed) but the new chapters, many featuring Resident Evil’s resident bad-ass Alfred Wesker, do a great job of bringing the whole story together from its earliest days to the end of the mighty RE4. 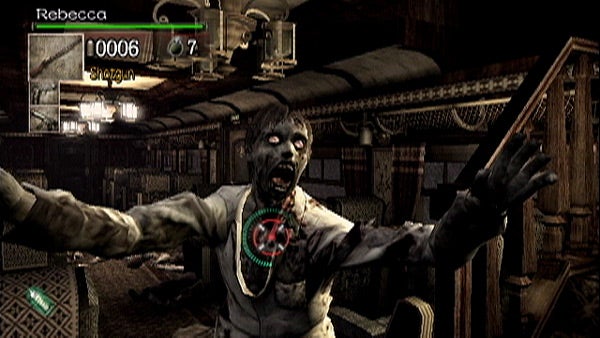 Let’s not get carried away here. Umbrella Chronicles still leaves you wishing for a proper Wii RE, still action-packed and with the same visual clout, but with puzzles and plotlines worthy of the series. In fact, you can’t help feeling that, having put so much effort into the environments, Capcom could have given us that Metroid-style first-person RE. But when it comes to it, bar those *%~##@@!! boss battles, Umbrella Chronicles is still a lot of fun. It will keep Wii action fans and RE cultists busy over Christmas, and help alleviate the wait for Resident Evil 5. 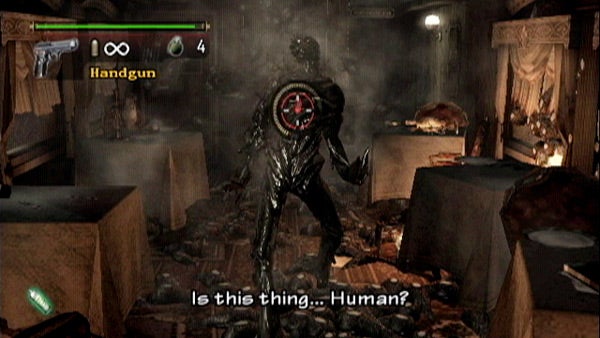 
Of course we would have preferred a proper Resident Evil or even a new first-person spin, but if we must have a light-gun game at least Umbrella Chronicles is a good one. Prepare for a few tricky moments, but otherwise sit back, take aim and enjoy the ride.