Available on Xbox One, PS4 (version tested), PS3, Xbox 360, PC
If you ever get a chance to see the original 1922 Nosferatu at the cinema, preferably at its original 18fps frame rate with a decent soundtrack, do so. Sure, it’s primitive and clunky, with the kind of mannered, expressionist acting you’d expect from early silent cinema and some unintentionally amusing night scenes, clearly shot in daylight, yet there’s still imagery and atmosphere to chill the blood. For all its limitations, its artificiality and its film history baggage, it’s weirdly affecting nearly a century on from its release.

Something similar can be said about Resident Evil HD – a new HD remaster of Capcom’s 2002 Gamecube remake of the original 1996 Resident Evil. Despite an update from 480p to full HD, the graphics and animation are clearly of a time. What was cutting edge in the PS2/Gamecube/Xbox era no longer looks quite so good today, despite a few enhancements here and there. The gameplay is even more dated, with constraints that few modern gamers would put up with from a new game, not to mention ropey combat and some of the most arbitrary puzzles known to man. All the same, there’s still something creepy and absorbing at work here; something that can still get to you today. 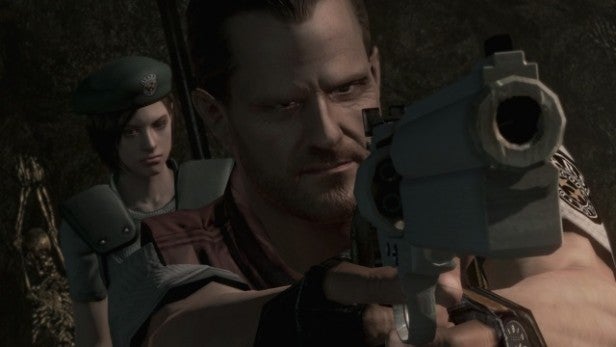 This isn’t a wholesale remake in the way that the 2002 Remake was. The Gamecube version gave us the same basic story, but with a new graphics engine, new locations, new characters, new mechanics and a few new twists, effectively reimagining the whole game for a new platform. Resident Evil HD is pretty much the same game, but with the visuals upscaled to 720p (Xbox 360/PS3) or 1080p (Xbox One, PS4) and a choice of new control systems. By default, the old turn and move controls are replaced by proper 360-degree analogue motion.

Otherwise, the major characters have been remodelled, along with key objects and creatures, while some of the game’s static backgrounds have either been redrawn entirely or had the artwork upscaled. Occasionally there’s an unfortunate contrast between the crisply modelled characters and the slightly low-res backgrounds, but for the most part it holds up pretty well. All in all, though, the adventures of Chris Redfield and Jill Valentine in the Spencer Mansion look and play much like they did in 2002. 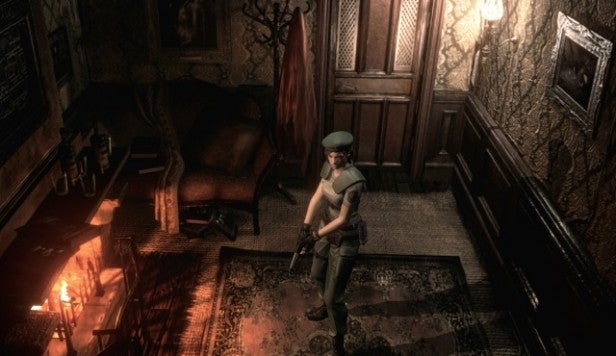 This is either a good thing or a bad thing – and sometimes both. You could argue that Resident Evil’s restrictive static camera angles, lengthy door-opening sequences, clumsy aiming and inability to move while aiming make the game roughly nine times longer and more difficult than it really should be. You could also argue that Capcom should have ditched Resi’s restrictive eight item inventory, not to mention its typewriter save system, where you can only save in specific safe rooms where there’s a typewriter, and only then when you have a typewriter ribbon.

Both mechanics mean that you spend much of your time in Resident Evil moving to and from the safe rooms, swapping items in and out of item boxes, then going back where you were with what you need. If a new game did this, we’d be screaming to the rafters about backtracking and padding. Somehow, a classic gets away with it. 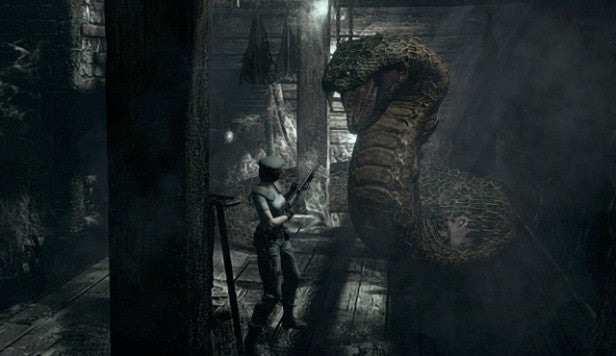 That’s because you can also argue that Resident Evil’s restrictions help create much of its atmosphere. As with Dark Souls, much of the tension lies in knowing that there are no checkpoints and that you can’t save anywhere, and that saving isn’t something you can do willy-nilly. Instead, you’re always gambling, wondering whether the smartest thing to do is proceed a little further and risk getting killed and losing progress, or play it safe but with the risks that you may run out of ribbons – or even die on the way back to the save point. In other games you can tackle zombies with impunity. In Resident Evil, a bad experience can mean having to repeat the last twenty minutes of play.

The inventory thing is harder to defend, but again it makes Resident Evil more challenging. It’s annoying that you can find yourself in a room without the object you need to complete a puzzle, necessitating a trip to the nearest item box, but it also makes you think about what you need, and make trade-offs between weapons, health and zombie-slaying items (like the kerosene and lighter that gets rid of them permanently) and the items that you need for solving puzzles. 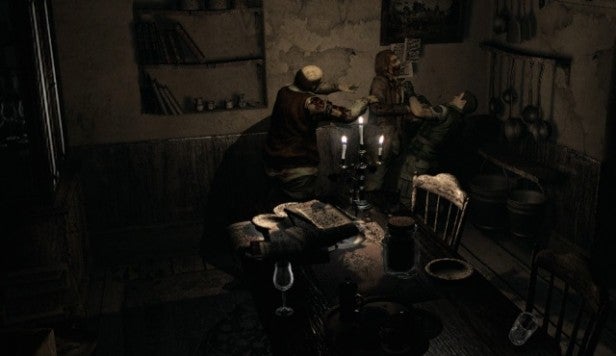 The camera angles? Well, they’re part and parcel of the experience, and in some ways the restricted viewpoint helps create a feeling of dread. You can hear a monster dog barking or a zombie groaning, but can you see them? Not on your soon to be abruptly ended life. It is frustrating that your hero/heroine can’t aim for toffee, the auto-aim failing to point weapons in the right direction and struggling most when zombies are up close, but again this contributes to the sense of panic. Even when you’re packing the mighty combat shotgun, you’re far from unassailable, particularly once the more advanced mutations come into play.

As for the puzzles, well, Resident Evil has the kind of obsession with locks and objects slotting into place that was commonplace in the nineties, and the vast majority of its conundrums come down to lucking across an item, storing it in an item chest, then retrieving it when it looks like there’s an opening to use it. There are some superb puzzles in there, but this is the kind of game where you’ll either breeze through a puzzle or end up consulting an FAQ because the solution makes no sense whatsoever. Nine times out of ten, that will be because you missed a vital item earlier on. 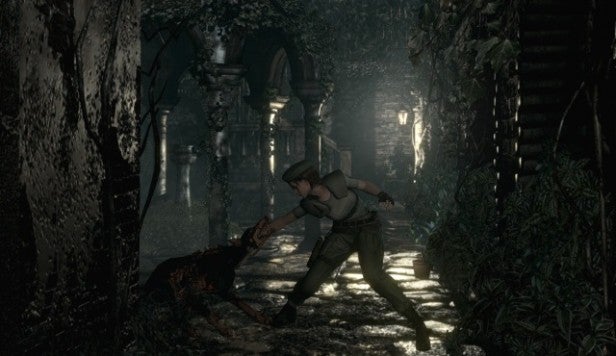 Strangely, none of the negatives really matter in the long term. The original Resident Evil took some of the oldest horror clichés – the haunted mansion, zombies, sinister experiments – and made them work in one vaguely coherent piece, without the layers of baroque narrative that have accumulated during later outings.

Let’s not say that it’s utterly convincing. The script is often rotten, the characters are flat and expressionless and the voice acting is so dire that it’s almost charming. Yet creeping around a corner, handgun at the ready, low on health and far away from a safe zone, still leaves you feeling tense and nervous. Resident Evil isn’t as dark or unsettling as the Project Zero/Fatal Frame games or the first two Silent Hills, but it has a weird, spooky ambience, and if you play it at night with lights off and headphones on it can still put a chill down your spine. 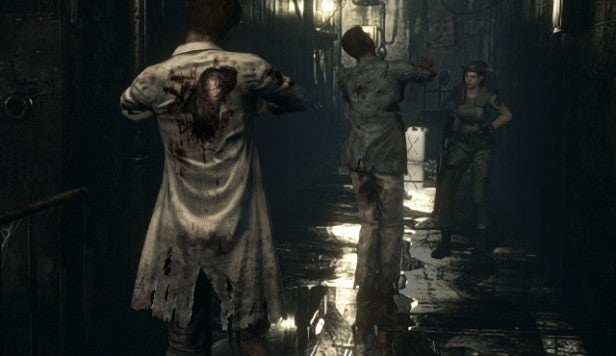 Whether it’s the design and claustrophobia of the core mansion setting, the weird camera angles and daft restrictions or the expert pacing, it works. While the Resident Evil sequels – and Shinji Mikami’s The Evil Within – have hit higher peaks of horror, the original game is still the most consistently creepy of the series. In fact, you can’t help feeling that there’s something here that the later, more action-oriented games have lost. There’s an awful lot of it, too. Whatever else you can say about the Resident Evil games, they’re always lengthy. This is one budget priced download that you can’t polish off on a wet afternoon.

Verdict
It’s a straight HD remaster of the 2002 remake, but as long as you can live with Resident Evil’s numerous and well-known idiosyncracies you’ll be surprised at how well it still plays. If you’re a major Resi fan it’s questionable whether there’s enough new here to take another dip – your Resident Evil memories are probably scarier than the real deal. First timers and long-absent friends, however, should open the creaky mansion door and step nervously inside. This horror pioneer is still one of the greats.