Available on Xbox One (reviewed), PS4, PC, PS3, Xbox 360
Taken just as a moment in survival horror history, Resident Evil 0 is fascinating. Originally developed but never released for the Nintendo 64, then revamped to follow the Resident Evil remake on the Gamecube, it’s a snapshot of a series and a genre in transition.

Where Resident Evil: Code Veronica looked forward to the real-time 3D and more action-oriented style of Resident Evil 4, the Resi prequel remained locked into the pre-rendered backgrounds, static views and tank controls of the first three games. Yet it still explores territory that would be revisited in the later games, with a focus on AI comrades and buddy mechanics that Capcom would tap into in Resi 4 then expand on in Resi 5 and Resi 6.

What’s more, it’s probably the least familiar of the mainstream Resident Evil titles. Unlike Resident Evil 4 it was never ported to the PS2 or PC, though a Wii version was released back in 2008. For some Nintendo-phobic Resi fans this HD remaster will be their first chance to get their hands on it. 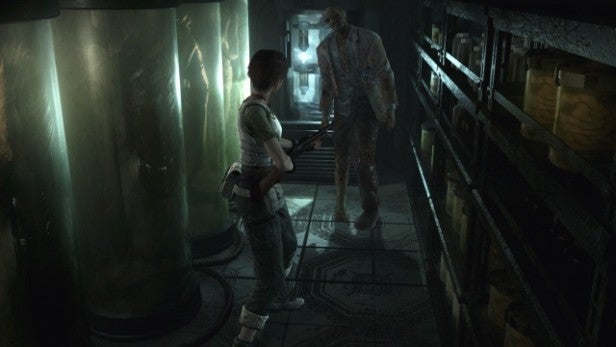 Those who’ve already played the Resident Evil HD Remaster will have a pretty good idea of what to expect: an HD update of the Gamecube version with all-new HD textures, some subtle remodelling of key characters and more sophisticated lighting effects. On the whole, it’s a good effort, maintaining the basic look and feel of the original but with a cleaner, more atmospheric presentation.

Neither the slightly crude (by modern standards) backgrounds nor primitive (ditto) monsters will convince you that you’re playing a modern console game, while the characters have the same plastic doll-like quality you’ll find in all of the Gamecube-era Resi games. Yet none of this makes this remaster less compelling. With its creepy settings, animated details and eerie sound effects, the Resi 0 Remaster retains that curious mixture of the scary and the cheesy that fans know and love.

Capcom also recognises that different players will want different things. If you want to play the game in its original 4:3 aspect ratio with tank-style rotate and move controls, that’s not a problem. By default, though, you can play it with modern analogue controls and a 16:9 ratio, with the view shifting vertically as and when required. Both approaches work well or you can mix and match, so it really just comes down to player preference. 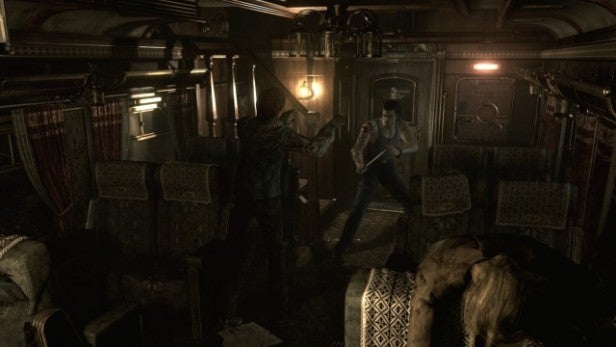 In terms of gameplay, Resident Evil 0 doesn’t quite get up there with the series’ finest hours. After a strong opening on an out-of-control train you end up at an Umbrella Corporation training facility which just happens to be another sinister gothic mansion with a close resemblance to the Spencer Mansion of the original game. While the action moves on from there for the final stages, you can’t help feeling that you’re seeing the first signs of a backwards-looking, fan service-led approach creeping in. In a way you’re not just exploring the events that culminated in Resident Evil, but re-exploring that game’s style, set-pieces and structure.

This doesn’t mean it’s never great. Creeping along corridors or through ornately decorated chambers is always interesting, and while the puzzles veer between the pitifully obvious and the ludicrously convoluted and baroque, there’s a pleasure to be found in opening a new area, discovering new documents and getting deeper into the frankly nutty back story of the Umbrella Corp. Despite frequent outbursts of bad acting, bad writing and the most horrendous clichés, Resident Evil 0 retains a charm and blood-curdling atmosphere that keeps you playing. Somehow, it manages to be ridiculous, incomprehensible and creepy all at the same time.

Combat hasn’t dated quite so well. The peculiar fixed camera angles make lining up shots awkward until you get a feel for how it works, while Resi’s penchant for changing angle in a way that’s calculated to obscure nearby monsties while you’re trying to blast at them hasn’t gone away. Neither control system works well for handling fast-moving mutant apes or Resident Evil 0’s nefarious leach monsters, while on normal difficulty ammo can be a bit too scarce. 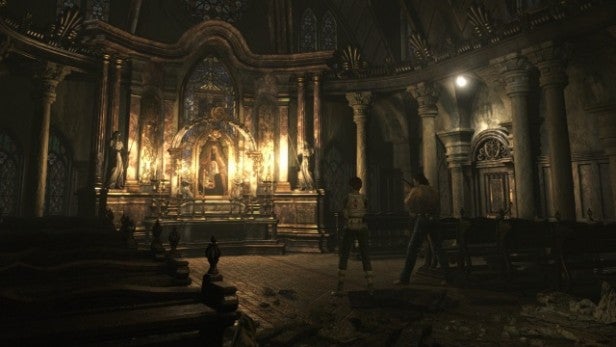 The good news here, of course, is that you’re not alone. You nearly always have two characters – newbie S.T.A.R.S. agent Rebecca Chambers and escaped convinct, Billy Coen – at your disposal, with the ability to switch between them at will. The partner you’re not controlling can be set to follow you around and provide backup or stay still and hold the fort, opening up puzzles where our protagonists must cooperate to triumph, one working switches or levers while the other explores an area, or one rushing to one end of the map to activate something while the other prepares to activate another switch at the other end. At the time this was all very new and exciting, though we’ve seen these or similar mechanics at work in every Resident Evil since.

The partner AI is primitive but surprisingly effective. Your CPU-controlled comrades don’t show much or any initiative and can be overwhelmed by the weakest monsters left alone, but the upside is that wasted health and ammo are never factors. And while switching between characters or changing partner behaviour is a drag using the old-fashioned menus, you can do both easily through shortcut keys as well.

It’s a shame that this Remaster hasn’t fixed or at least moderated old frustrations. The inventory system, with just six slots for each character, is still a nightmare, particularly as the best weapons always occupy two whole slots. Sure, some fans will say that it’s a core part of the gameplay, but it’s ridiculous that you can’t pick up a key or ring without dropping another item. Plus. while Resident Evil 0 allows you to leave items anywhere and collect them later, this can be more of a pain than the original Resident Evil’s ludicrous item box system, which allowed you to grab them, wherever you’d left them, from your nearest box. 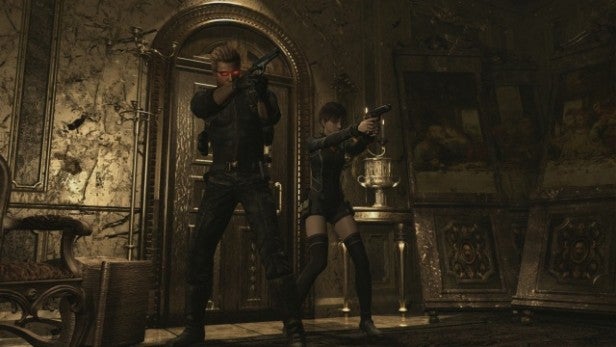 I’m also in two minds about the classic Resident Evil save system, which still finds you collecting ribbons to save your data on scattered typewriters. On the one hand, it stops you saving constantly and adds to the tension. On the other, it’s an absolute menace when you take a risk, don’t save and then get slaughtered, leaving you to redo the last ten to twenty minutes of the game.

Fans of the series needn’t and shouldn’t be put off. This is a chance to rediscover one of the most under-appreciated chapters of the Resi saga. Not only can they delve into the back stories of some of Resi’s most notorious villains, they can even play through the game as one of them in a rather bizarre bonus Wesker Mode. Like eye-lasers and kinky costumes? This one’s for you.

And for less hardcore fans and newbies? Well, this is an excellent, sympathetic restoration but the game being restored is neither as focused or frightening as the subject of last year’s Resident Evil HD Remaster nor as spine-chilling as more recent survival horror outings, including Resident Evil: Revelations 2 and the flawed but brilliant The Evil Within. You’ll still find the Resident Evil prequel entertaining, creepy and sporadically brilliant, but be aware of its limitations going in.

Verdict
If you’re a Resident Evil fan or want to explore one of survival horror’s less celebrated works, then this remaster is a treat. There are good reasons why Resident Evil 0 isn’t remembered as fondly as Resident Evil, RE2 or RE4, but its survival horror gameplay still works on its own terms and there’s plenty of fan service to enjoy. If you’re just looking for a solid horror game, there’s more life in this old corpse than you’d expect, even if it’s not quite Resident Evil in its blood-curdling prime.