Available on PC (coming soon to Xbox One)
If you’re expecting a dodgy bargain basement cash-in, you’re only half wrong. Released, rather spuriously, to celebrate the 25th anniversary of Reservoir Dogs, Bloody Days is a tie-in so divorced from its source material that it makes last year’s horrific Ghostbusters look like Chronicles of Riddick: Escape from Butcher Bay.

Despite starring ever member of Joe Cabot’s crew, there’s no voice acting whatsoever, the characters look nothing like the original actors, while the plot – a series of generic heists taking place before the events of the film – actually seems to contradict the movie. After all, these are meant to be guys who don’t know each other well, not guys who have been robbing stores, banks and nightclubs for weeks on end.

What does that leave fans with? Cartoon versions of characters with the same names and similar outlooks. Some Reservoir Dogs-style music (though not the same, iconic tracks). Quotes from the movie during reload screens and inserted, sometimes cleverly, into the dialogue. Professional criminals in sharp suits and a whole lot of blood. The best you might say is that Bloody Days captures something of the spirit of the movie, but I’m not really sure it does. 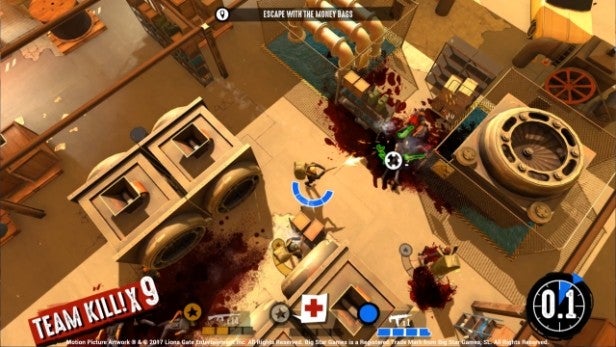 The surprise, though, is that it’s not actually that bad a game. It’s a top-down shooter vaguely in the style of Hotline Miami, where Mr White, Mr Brown, Mr Blue et al, have to tackle a series of robberies, working two or three guys at a time. This means working your way through each jewellery store, meat-packing plant or warehouse, gunning down anyone and everyone who stands in your way, while robbing anyone who has something of value (plus any cupboards, safes or cash registers you might find). You have guns but very limited ammo, and the hostile cops and mobsters come on thick and fast. Basically, we’re talking bloodbath every time.

The twist is that you control your crew just one man at a time, moving, say, Mr White and blasting, then rewinding time to do the same with Mr Blue. Your lead character puts seconds on the clock, which your secondary character then uses before reaching parity.

This has a range of uses. Get Mr White killed, and you can bring in Mr Blue to stop it happening. Didn’t spot that cop with the shotgun firing through the doorway? Well, now you have a second chance. You can also split your characters to tackle different targets, surprise hostiles from different directions or even the odds when you find yourself surrounded. The only downside? It’s perfectly possible to ace the level with Mr White but get Mr Blue killed through sheer stupidity, instantly negating all your efforts. 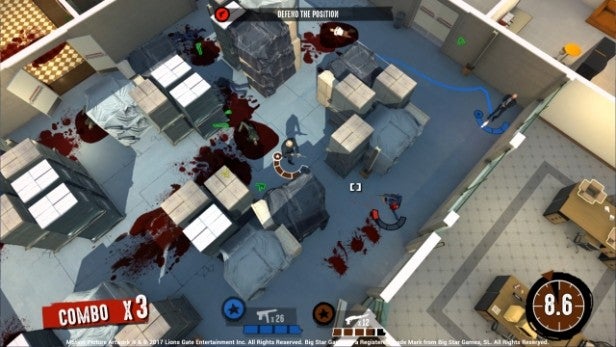 And so the game goes, each level divided into a series of phases, activated when your team hits a certain checkpoint. Sometimes you’ll be going into action, all-guns blazing, sometimes you’ll be on the defensive, trying to hold off waves of goons or cops. Some missions feature time trial sections, where you’ll need to synchronise your efforts to get the job done in a set period or less. And when it’s over and you’ve made it to the getaway car? It’s back to the map screen to spend your earnings on unlocking new jobs, ready for the next big score.

It’s not that visually compelling – think decent iOS twin-stick shooter – but Bloody Days is fun. It makes you work to get through the level and a lot of blood and gore is splashed around. Its problems are twofold. On the one hand, it falls down on the annoying little details. On the other, it starts off with some interesting ideas but never really takes them anywhere.

On the first count, we could talk about the slightly slack twin-stick controls, the challenge of picking up the right dropped weapon when you need to and an annoying propensity for placing enemies off-screen so you can’t see them even when they’re shooting at you. You have to fire in the general direction and hope for the best. 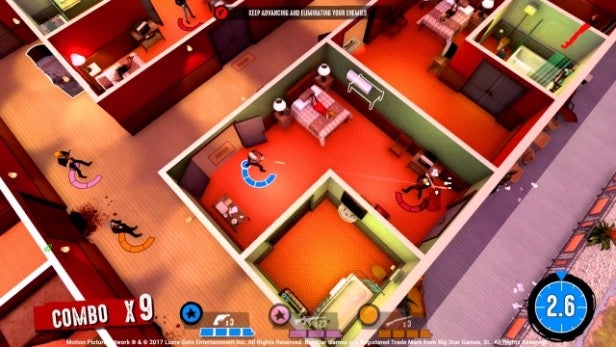 On the second, Bloody Days wastes its potential. One level feels pretty much like the last and, while new members of the crew join the action as time moves on, one guy plays very much like the others. There are theoretically different stats that make one faster or less vulnerable, but there isn’t much of a sense that this factors in the gameplay all that much. Even introducing a third crew member isn’t game-changing. You’re left with a decent enough game for a quick blast here and there, but nothing essential.

And all this leaves me thinking: wouldn’t it be great to have a Reservoir Dogs game that reflected the dynamics of the movie? Where the characters and their attitudes mattered and they had different skills to bring to bear? In the end, you could strip the license away from Bloody Days entirely and it wouldn’t be a better or worse game in any way. It’s taken a bunch of professionals and made them look like first-year thieves.

Verdict
There are good ideas at work in Reservoir Dogs: Bloody Days, but it’s a shame that one of the most intense and shocking indie movies ever made has spawned a game that’s neither. At its best, it’s a tight, engaging twin-stick shooter with an element of strategy and a cool rewind mechanic, but it never manages to be anything more than that.